Atlus’s Catherine has reached the English speaking world. This quirky, sexual, and mysterious game is Team Persona’s very first HD title. Now that Catherine has left Japan for new sights, more gamers have the opportunity to see what it has to offer.

Catherine’s story is the primary focus of this game. It’s presented as a television show by a woman named Midnight Venus. Vincent and Katherine’s tale is told through the Golden Theater television program. Catherine puts players in the position of a viewer of the show. This doesn’t have a real effect on the game beside presentation, but it adds a fun approach to the game’s story and bonus modes. 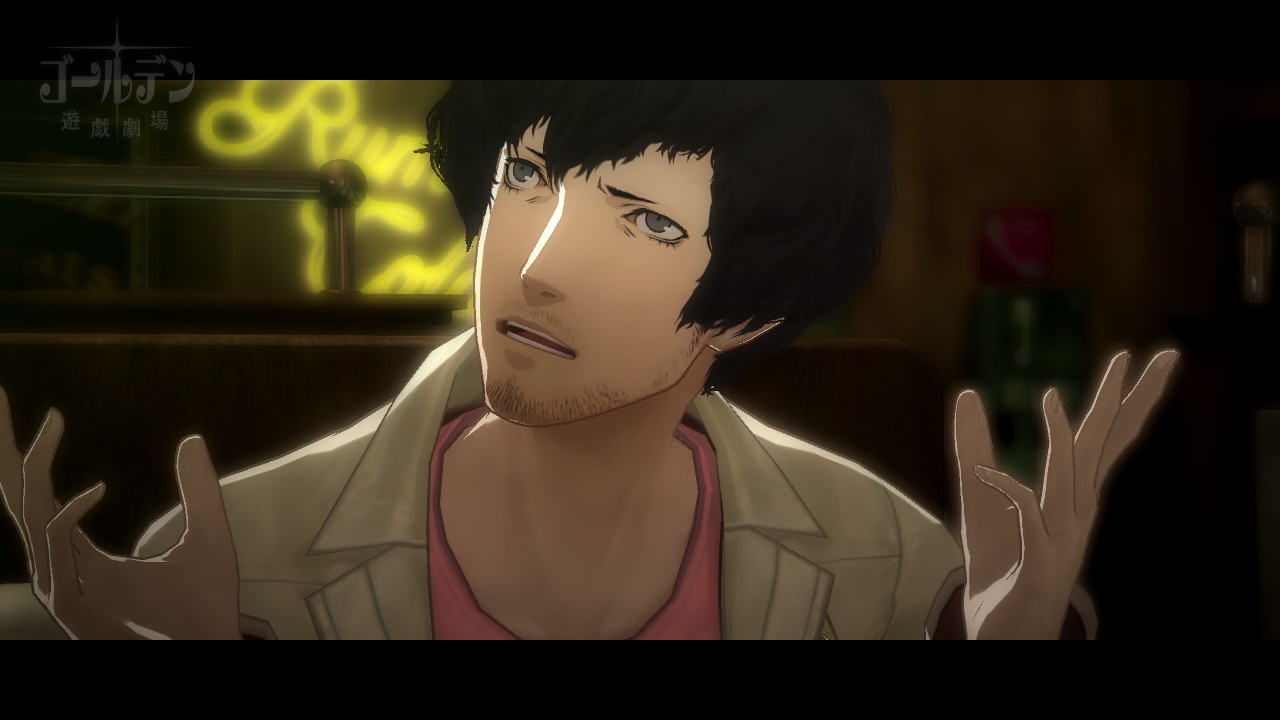 Catherine follows the tale of Vincent Brooks: A thirty two year old systems engineer with commitment issues. When his girlfriend Katherine of five years starts to hint at marriage, the distraught Vincent starts his descent into a story filled with love, trust, and betrayal. Vincent is pretty comfortable where he is in his relationship, but the new-found pressure from Katherine pushes him to do something stupid: cheat.

Vincent soon finds himself stuck in a love triangle after he meets a blonde bombshell named Catherine. After a night of heavy drinking and thinking, Vincent wakes to find this new girl in his bed. After just speaking to Katherine about taking their relationship further, he ends up sleeping with a young and peppy twenty two year old. From then on, Vincent starts to have nightmares where he must climb a structure made of blocks to avoid death. If he dies in his dream, then dies in real life. Like an epidemic, men all around Vincent start to dream and die.

The story of Catherine is a real winner. It’s mature, adult, and compelling. Vincent, his friends, and other characters are fleshed out to be complex, and believable. The writing makes the story flow at an eluding but gripping pace. Vincent and his pals are long time friends, and their dialogue seems authentic, and easy to relate to. 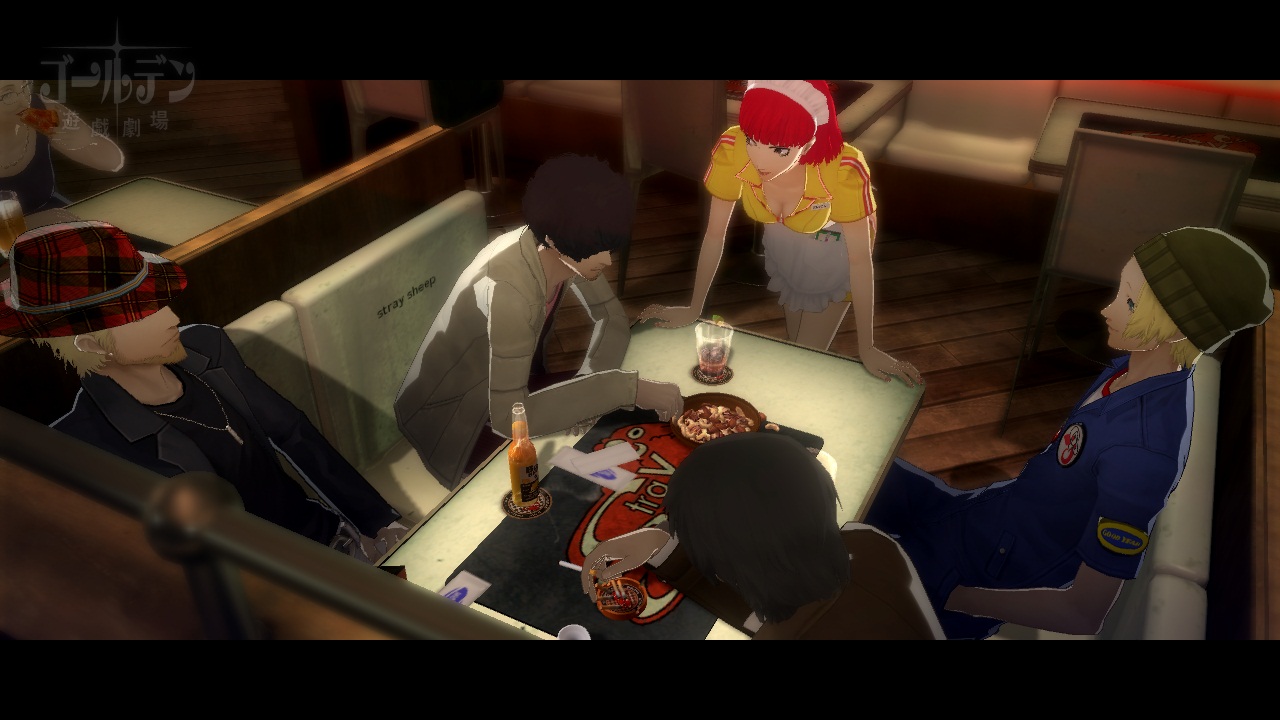 The story handles tough, adult themes such as commitment, love, sexuality and trust. It explores the age old debate whether humans are naturally monogamists or polyamorous, and if marriage is simply a construct or the true meaning of love. The game handles these topics very well –something I have yet to see to such a degree in videogames before. So much so that the game introduces a character’s sexuality in such a passive manner that it was endearing. There is no hate or immaturity behind it. The game’s style may be goofy, and humorous, but underneath it’s thought provoking.

While the game’s marketing, and outward appearance can easily lead people to be confused as to what they’re getting into, Catherine hits home with its themes. Vincent struggles with a decision over which girl to pursue: his long time girlfriend Katherine, or the young and promiscuous Catherine. Based on your decisions Vincent can discover himself and find out what’s important in his life. The “morality” meter in this game is not strictly set to a good or bad option, but rather deeper questions that some may avoid asking themselves in real life. Depending on which side you favor, Vincent can either see himself as a free man and live commitment free, or he can grow up and start a life with the woman he loves. 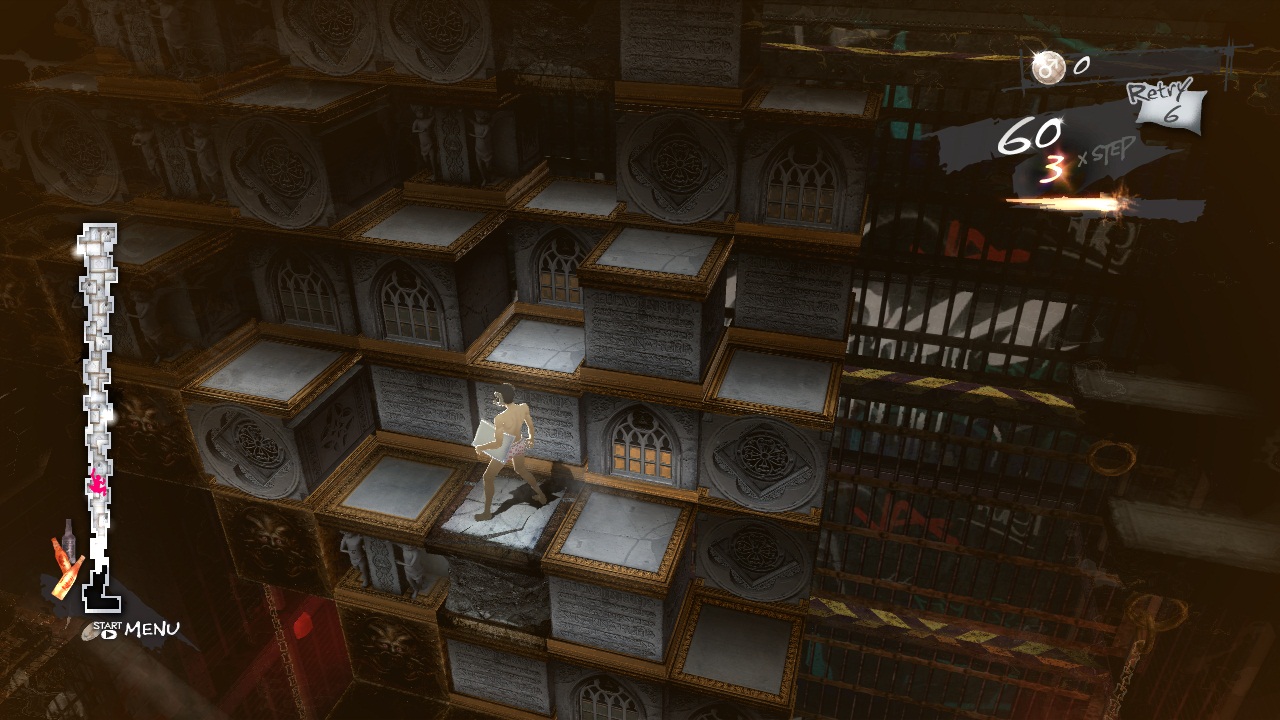 Catherine’s gameplay is split into several types. The main type being the puzzle climbing. Vincent, and fellow sheep-men must climb up a tower every night to avoid death. The mechanic is simple to comprehend but takes skill to master. Blocks must be moved in such a way as to form a path allowing you to go higher and higher until you reach the goal. Special blocks have unique properties that can either make things more challenging or easier. Ice blocks create a hazard; explosive blocks can be dangerous, but useful for more complicated tactics; trap blocks can send you over the edge to your death. 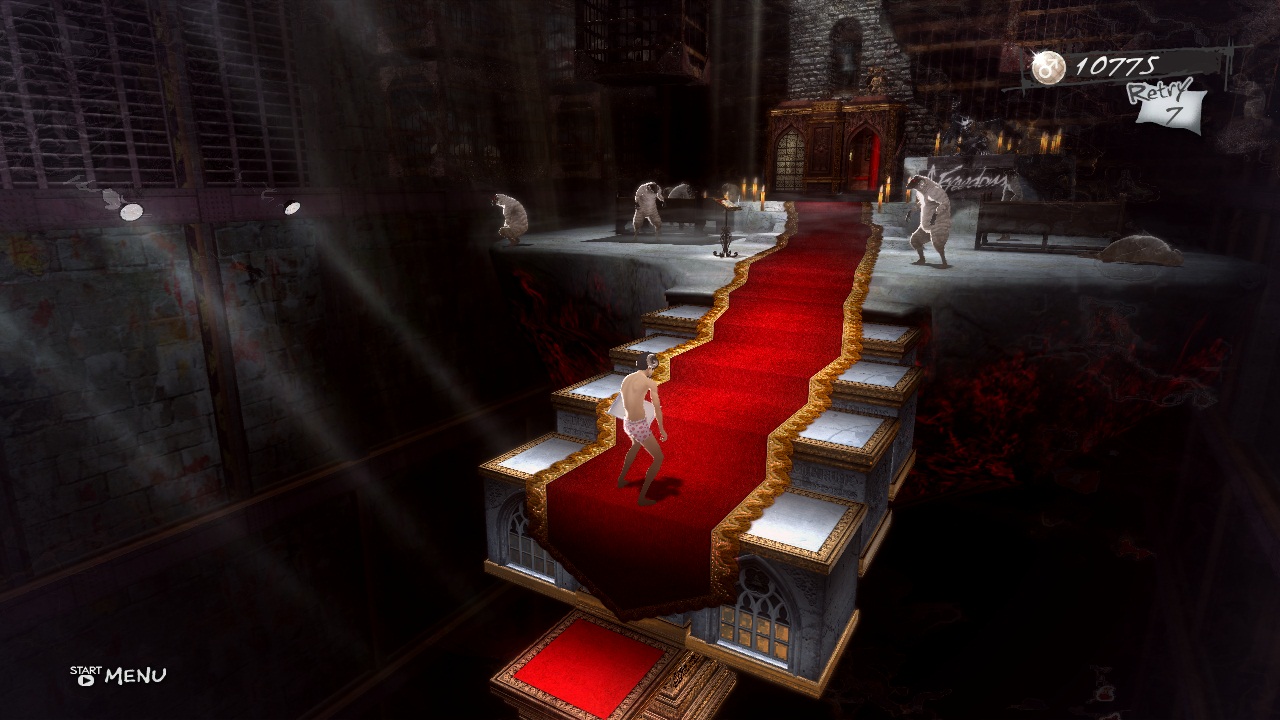 The puzzle sequences make up the majority of the game and brought something refreshing to the table. While the game goes into a more traditional third person approach for the hub-type areas, the puzzle portions really kept me interested; They’re demanding yet approachable. There were times that levels were extremely difficult, but most of the frustration came from my strategy being weak. There were minor annoyances where I went around a block and fell rather than pushing a block, but besides that, the game controls well. I’m not a puzzle type of person, but Catherine did a good job keeping me interested between story segments. A real sense of accomplishment came at the end of every level as well.

When not climbing, Vincent can occupy himself in his local watering hole, the Stray Sheep. Here players can talk to Vincent’s friends, other people in the bar, and play around on the Rapunzel arcade machine. The Rapunzel game is a simplified version of Catherine’s puzzle levels but still pretty challenging. Vincent’s phone can also be accessed to check awards and respond to text messages from his lovely ladies. Each response can be altered to either favor or dismiss Katherine or Catherine. These responses –along with the question at the end of each puzzle segment– will affect the morality meter, and ultimately the ending. 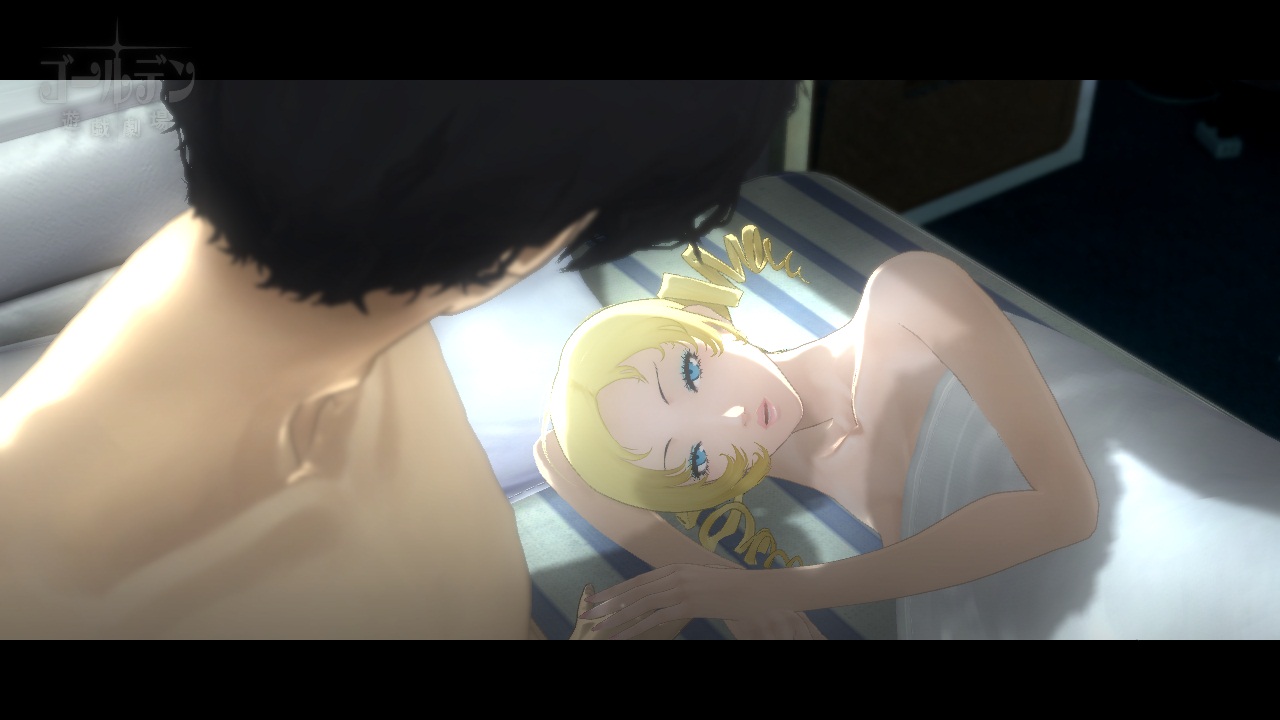 Outside of the main story, there are two types of challenge modes: Babel and Colosseum. In Babel players can choose to play alone, or with a friend while climbing to survive. Colosseum allows two players to climb against each other competitively in stages from the main game. Both modes prolong Catherine beyond the main story, but I can’t help but feel there was an opportunity missed. Both modes allow for two players but not online. Not only would online be fun, but it would allow players to play with a distant friends and not only close ones. That’s sorta like choosing which person you want to have fun with right? It works with the story! 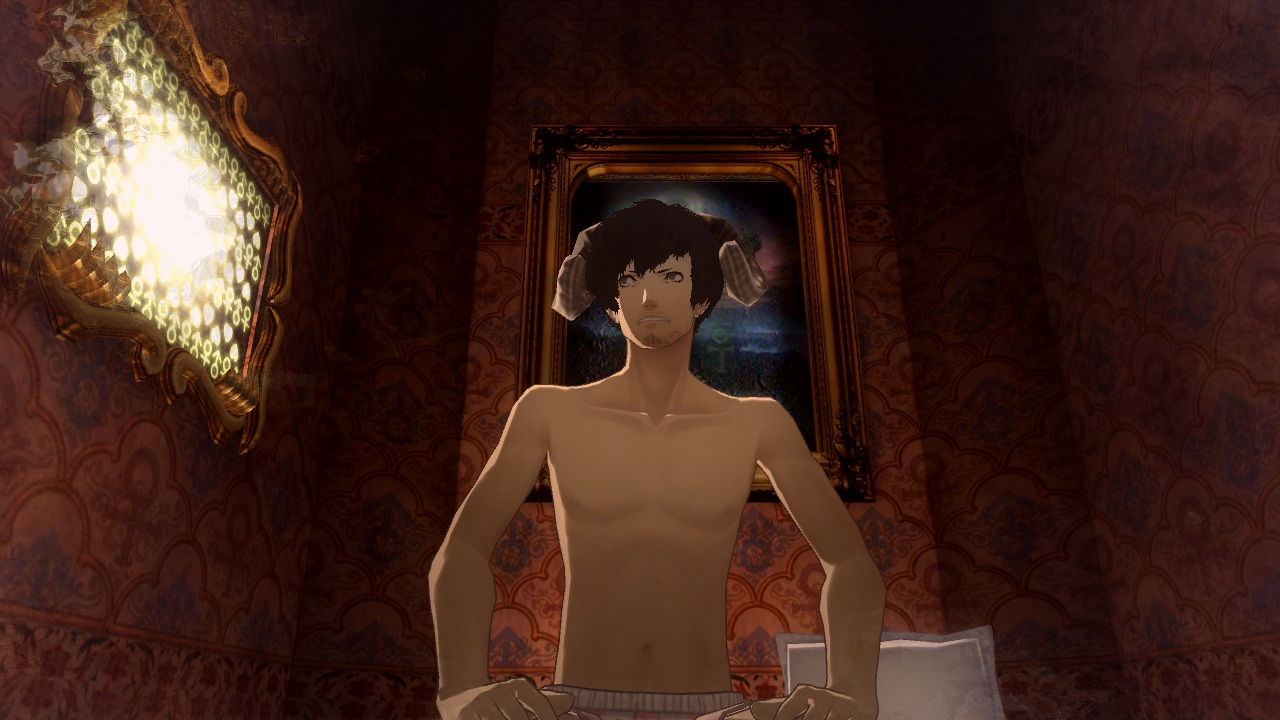 Catherine was a surprisingly brilliant title that was quite refreshing. The art style is unique and done justice by the accompanying anime cutscenes. The music contains interesting remixes of classic compositions by Bach, Beethoven, and Chopin with a modern edge. The whole package contains a strong sense of style.

The game has some very minor control faults when it comes to frantic puzzle segments, and a bit more things to do in Stray Sheep would have been a plus, but I left this game pretty satisfied. I would more-so if I could put my climbing skills to the test with friends online, but in the end, the great story was that this game was about. Catherine is a fun game with strong ties to real world issues, and it was a must-play experience.