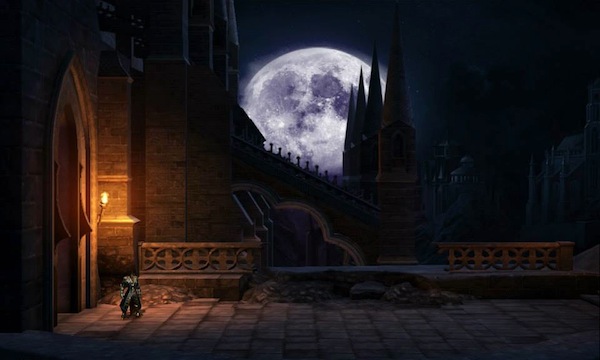 As one of the first notable games of 2013, it’s not entirely easy to remember Castlevania: Lords of Shadow – Mirror of Fate when it comes to deciding the best games of the year across various categories, especially with all the mixed reviews it got and glowing ones for big triple A releases that don’t need any introductions. Those mixed reviews for Mirror of Fate all seemingly coming from expectations that the former 3DS exclusive would be another game in the series using the tried-and-true Symphony of the Night template. That’s not what Mirror of Fate is. What it is, besides being amongst the best games in the 3DS’s extensive library of amazing titles, is an old-school tribute to Konami’s long-running vampire-hunting, Dracula-abusing series. It’s one that marries the series’ retro side-scrolling action-platforming roots with Lords of Shadow’s combat and sense of grandeur, with a nice touch of Symphony of the Night in there as well.

As is the growing trend with publishers and their home-console-worthy handheld exclusives, Konami has brought Mirror of Fate over to PlayStation 3 and Xbox 360 as a digital-only release (it’ll be packaged with the Lords of Shadow collection as a voucher code). Right off the bat (no pun intended), the game looks really pretty, with the upped quality in visuals resulting in an overall richer atmosphere. Some of the character models, when up close, may not look all too impressive as a native console title’s would, but they all animate fluidly and are set to gorgeous backdrops that have now received new life. I was able to pick up details I wasn’t able to before, even after having previously played the game on the 3DS XL’s screen. The improved visuals really let the game’s eerie and gothic art direction shine even more, which serves as a natural evolution of the visual style seen in the classic NES titles and Super Castlevania IV as opposed to Symphony of the Night’s (and its successors’) more colorful, but still superb, visuals. The architecture at display here is truly worthy of Dracula’s demonic design, with the castle itself looking mighty impressive and as brooding as its master.  And while the 3DS’s 3D feature is stripped away from this release, it still retains the depth of field that really brings the level design to life, immersing players even more.

The game’s comic book style cinematic cutscenes now look even more vibrant and beautiful, with the added ability granted to characters enabling them to actually move their mouths during dialogue being a big plus. I think the art style employed for the cut scenes is gorgeous and it would fit quite well with a future Symphony of the Night-style game. As a nice bonus, as far as the game’s art goes, it was also nice to see new portraits for each character on the HUD as well as beautiful pieces of environmental artwork in the loading screens. To top off the game’s improved presentation is its soundtrack, which rivals that of the first game. Oscar Araujo continues to impress and bless our ears with Mirror of Fate’s music. Despite having some re-used tunes, the ones that are exclusive to this game are quite amazing and give off a darker vibe than the original game’s soundtrack. They fit the tone of the game perfectly, while still aurally setting the stage for the grand scale encounters you’ll partake in against the game’s cast of baddies that have become some of my favorite boss fights in recent memory. 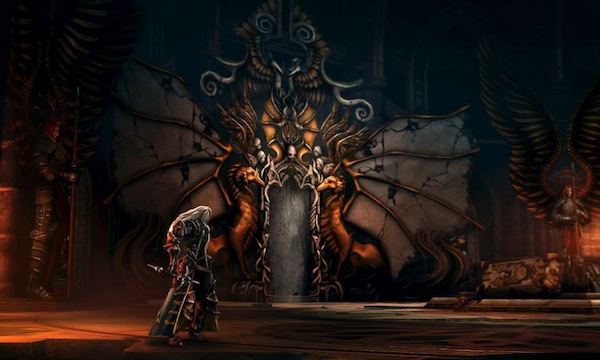 One particular aspect of the boss battles not unanimously loved was the inclusion of quicktime events (the same applied to the original). QTEs in general were looked down upon in the game’s original release, as they were necessary for simple tasks like opening chests as well. Well, here’s some good news! Mirror of Fate HD does away with QTEs, except for the special occasions (only a couple) where you have battles that consist entirely of them (like two memorable boss fights in Trevor’s chapter). I, for one, didn’t have any issues with the QTEs; I almost never do with their usage in games. But I acknowledge that doesn’t exactly fly with everyone. So it’s nice to see MercurySteam actually fix that issue with this HD release. Another issue some had was the lack of mouth animations during cutscenes, which, as aforementioned, has been rectified here. Another nice fix is being able to control the characters with the d-pad. For some reason, we couldn’t do that on the 3DS. But the biggest addition made to the game outside of the improved presentation is something beloved by longtime fans of the series.

Mirror of Fate HD brings boss rush mode with it, unlocked after beating the game once. I was hoping the classic mode would come to the 3DS version as DLC, if anything, so I was really pleased to see it part of the HD version. Boss rush works just as you’d expect, taking you through the game’s gallery of memorable baddies all leading to the Price of Darkness himself. Beating it won’t be a simple feat, as your health doesn’t regenerate and you only live once (I just had to…). It’s a very satisfying challenge, and one you can go back to again and again (leaderboards are also a plus!). One thing I wished to see was the ability to play as any of the game’s 4 playable characters (there goes my Gabriel vs. Dracula fantasy battle), but it just goes in the exact order the battles do in the story mode. Lastly, you have another notable extra: the Lords of Shadow 2 demo. This is the E3 demo we’ve seen and read about extensively, where the Brotherhood of Light send their troops to confront Dracula and destroy his castle. I’ll be writing a separate piece on the demo soon, so be on the lookout for that! Wishful thinking on my part, but it would’ve been awesome if we got a new mode with another playable Belmont. Possibly Victor Belmont, with a short chapter setting up his role in Lords of Shadow 2 (I want Julius!).

Mirror of Fate was already an amazing game back on the 3DS. It always felt like it belonged on a home console, so this HD version is certainly much appreciated. It doesn’t just improve the visuals, but it also adds to the game and remedies some of its previous issues. Mirror of Fate is still one of my favorite games this generation and one of my favorite games in the series. It’s a near-perfect evolution of the game’s action-platforming roots, while continuing to expand upon the Lords of Shadow saga. Before, the series’ side-scrolling entries used to be more about just the gameplay, but Mirror of Fate changed that, offering a tragic and emotional tale that’s just as enjoyable as the game’s actual interactivity.