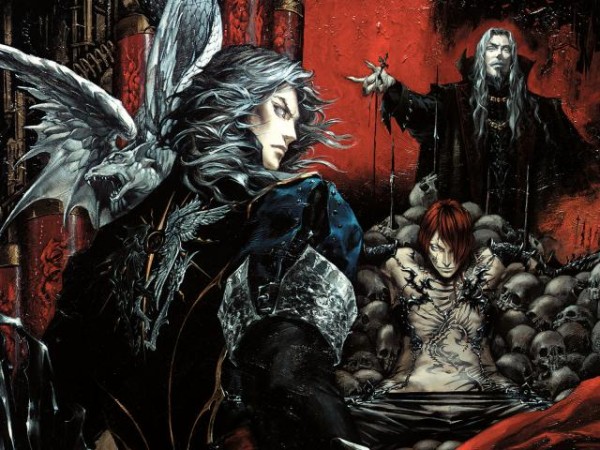 Three years after the events of Castlevania III, Europe is still being ravished by the terrible curse left by Dracula. An unusual hero rises from the shadows after his beloved Rosaly is killed. This man is no other than Hector, forger Devil Forgemaster and henchman of Dracula who sought a normal life, abandoning the sadistic nature of his master. Renouncing his abilities to create devils he leaves Castlevania in pursuit of happiness. What his future holds is anything but.

Following in the footsteps of Lament of Innocence, Curse of Darkness plays like its predecessor in a world filled with monsters and mystery. Hector can use a wide array of weapons since he is not a part of the Belmont Clan. The combat system is pretty straight-forward, you learn abilities as you progress and employ new combos to defeat your foes with ease – overall pretty similar to Lament of Innocence and I feel they could have expanded on it a bit, especially with all the weapon choices. An interesting addition to simple combat is the inclusion of Innocent Devils (think Familiars from Symphony of the Night) who aid Hector in different ways, ranging from simply healing him to generating stat boosts. Forced to take up his old profession after he is goaded into a fight by his once fellow Devil Forgemaster, Isaac (who is responsible for Rosaly’s death), Hector creates these devils along his journey to aid him in his battle. It is fun having them around and they each have abilities to select from. You can also give them combat orders, fight alongside Hector or do their own thing- whatever suits the situation. 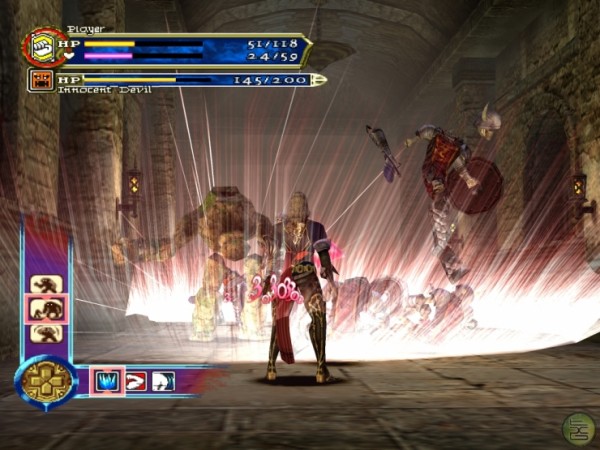 Perhaps the most exciting upgrade to the series was the ability to construct equipment from random materials gathered throughout your journey. While it is a basic collect and build formula, it is fun trying to acquire the right materials for what you wish to create, and some of the coolest stuff will benefit farming baddies for materials. There is a plethora of equipment to construct and test as you desire, which gives the game a decent amount of treasure hunting.

The art of the game, visuals and music, have their ups and downs that either add to the experience or hinder it. Some graphics are a small step up from Lament of Innocence, but nothing to be too proud of. While the overall experience feels identical, there are visual improvements in terms of character models and environment. The cool thing about Curse of Darkness is that it takes place in many environments, so there was enough room to test out new things rather than just the gothic stonework of Dracula’s castle. Other than that there are certain things that look pretty pathetic, some of the torches and candles look slapped together. The great Michiru Yamane returns to score the adventure and as usual does a fantastic job. Arrangements vary from orchestra to electric to subtle guitar riffs and never miss a beat. I wouldn’t go so far as to say the soundtrack is as good as Lament‘s, but it’s an immersive experience. That’s about all I have for the music, it’s rarely a let down in the Castlevania series. 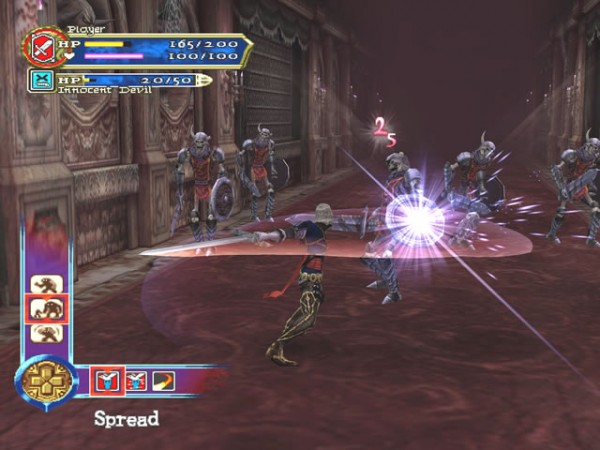 Overall this game is a worthy successor to Lament of Innocence. With genuine (but small) improvements in combat, graphics and treasure hunting/crafting, Curse of Darkness is a welcome addition to the franchise. It could have been better had it expanded further on the combat system.  Some may find the premise to be a tad tired at this point, but it was pretty cool to play one of Dracula’s henchmen. There are perks for completing the game as well, including harder difficulties and the ability to play as the great Trevor Belmont! It is a fun game to play and those who played its predecessor will find more of the same fun with some things added to make it a little different, but there isn’t enough to differentiate it enough -combine that with some of the small graphical and combat issues and it suffers a little.