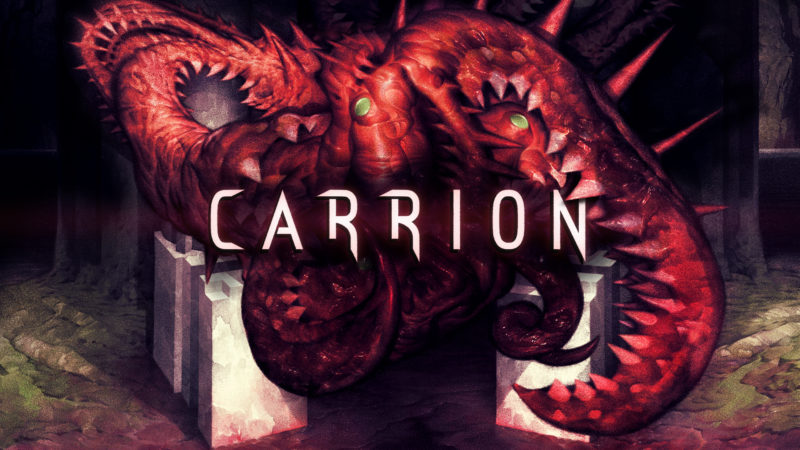 In the great pantheon of horror games, it could be argued that the “structure” of acceptable design is considerably more lenient than that of other genres. Shooters play a certain way, action has a specific set of styles it stays within, and don’t even get me started on the almost homogenized open-world design. Horror games, on the other hand, only really require one specific criteria: it uses or realizes the basic concepts of what any other medium would consider “horror”. Such is the case with Carrion, a new “reverse horror” game from Butcher developer Phobia Games Studio. When other games would have you running for your life, Carrion sees you realized as what they’re running from. Does this concept work in practice? Well, let’s break it down.

Carrion doesn’t waste any time putting you in the horrifying blob of the title beast, skipping over any exposition in order to set you upon the hapless scientists and guards of the facility you were being held captive in. Slithering through vents, suspending yourself with blood-soaked meat vines like Spider-Man turned inside out, and devouring any and all human life in your path, you instantly get a solid grip on the movement and pacing you’ll be enjoying for the next 4 hours or so. And I do mean enjoying, as the fluid motions of the Carrion and delightfully disgusting animation as you do so never get old. Chowing down on the humans around you never gets old either; despite being used for defeating enemies and regaining health, I always chose to clear out a room completely rather than leaving anyone in my wake. The grab of its tendrils brought out my dark side as I found tons of fun and unique ways to torture the pathetic little whelps as I grabbed and slowly dragged across the floor towards my waiting maw, or simply flung them straight up to watch them scream all the way down before landing with a satisfying thud and arterial spray. 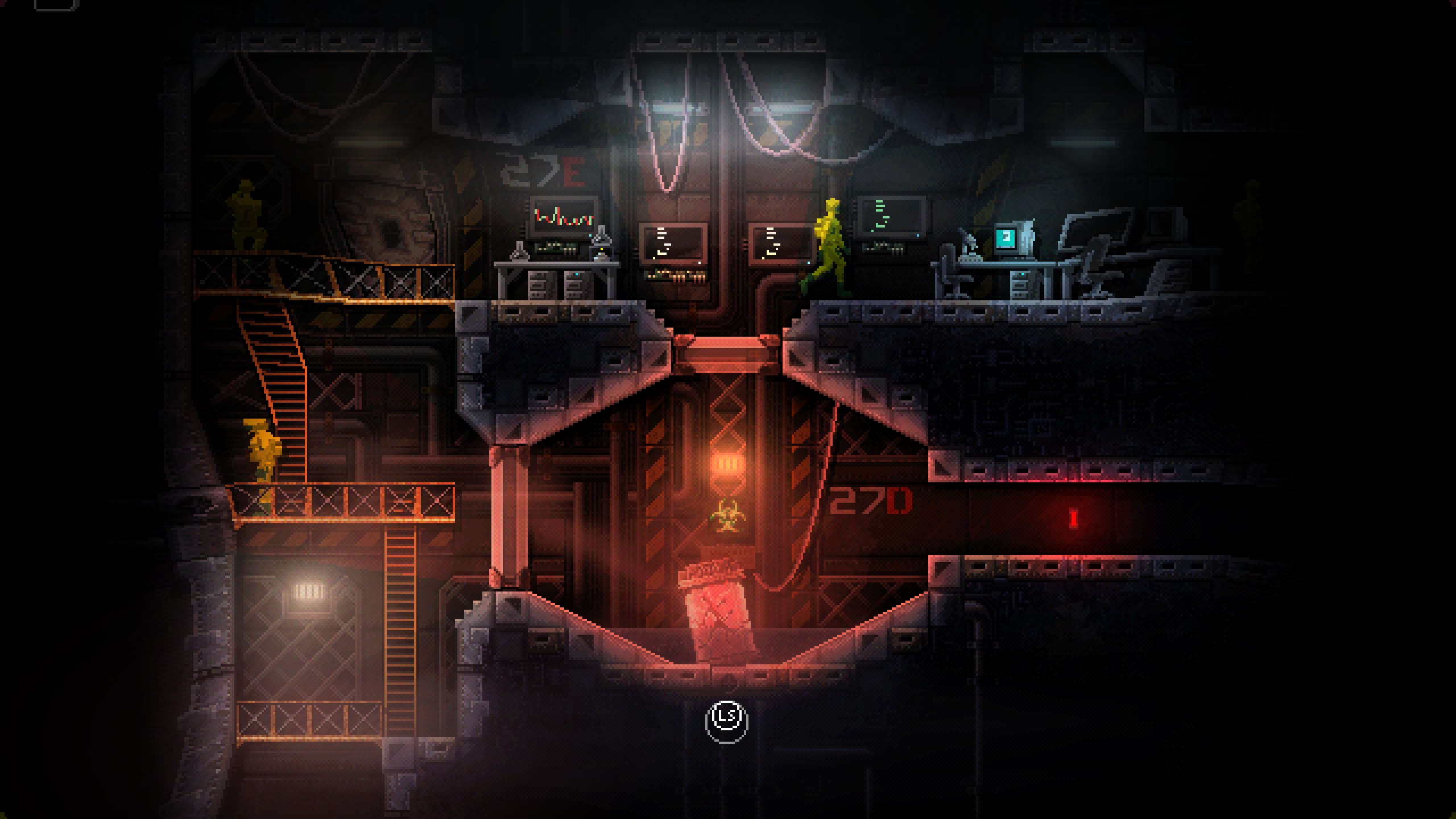 I should mention that the sound design as a whole is also satisfying as hell. From deep and resonating gunfire to the variety of screams (and death rattles) of your prey, the sound designers behind Carrion deserve commendations. The Carrion’s screeches when shot (or later on, set ablaze) are chilling as well as weirdly sympathetic in a way the human cries don’t quite match. Unfortunately, the rather banal score doesn’t live up to the rest of the audio design; choosing to settle into only a handful of very same-sounding ambient droning for music. I’d much rather have had something more synth inspired, but perhaps the developers wanted to keep comparisons to The Thing limited to just the creature itself.

The Carrion is truly disgusting, writhing and nigh formless as it stretches and slithers across the world leaving splattered blood in its wake. The animation is truly something to behold as you dynamically shift around the space you explore, swirling across the walls, floors, and ceilings like a bloody wad of loogie in a glass of water. Indeed, the animations for everything else are great too, as the lightly 3D humans roam around the world. The backgrounds are all 2D, so the humans stand out nicely. The fluidity of their animations reminds me of 2010’s Ghost Trick: Phantom Detective on DS. Color also plays a big part in the game’s visual language, as dynamic lighting creates stark shadows and deep colors as you and other moving objects block out light sources. One of my favorites is when you use one of your meat hives, which glow with a deep red until you approach them where the color switches to a vibrant blue. 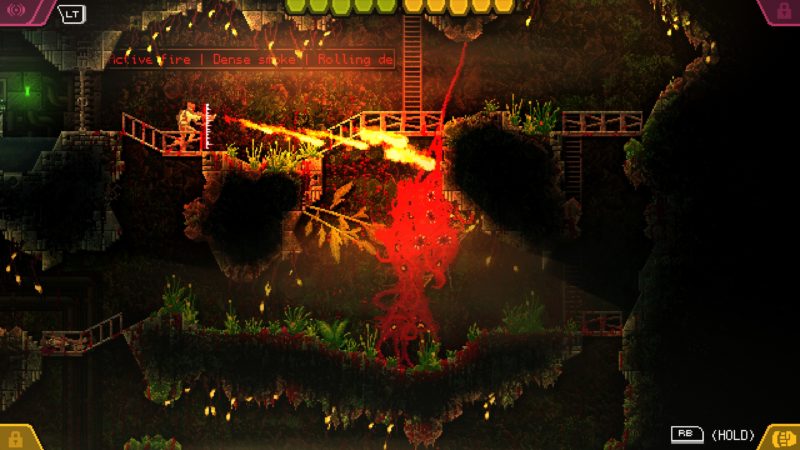 Exploring the world, you will occasionally come across mild puzzles, none of which are particularly challenging. Existing closer to something like Metroidvania design; rather than truly being puzzles they simply require an ability you haven’t unlocked or dropping off (or gaining) bio-mass in order to use specific abilities.  These are locked off by your size, as there are certain sets of abilities gated behind how much there is of you. You lose bio-mass when taking damage, but can also off-load some in specific pockets of pink liquid around the world (although the game neglects to tell you what that does or even that it’s required). Eating humans is how you regain bio-mass, although some humans wear hazmat suits that you cannot chew through, leading to having to be cautious about the order in which you turn people into gore on your ass. Again, very rarely does any of this pose anything more than an annoyance at worst, which I found disappointing.

That isn’t to say the abilities you acquire aren’t totally awesome- they’re another highlight of the game for sure. I especially love one of the later game abilities where you use one of your tendrils to take over the body of one of the humans in order to get to out-of-reach switches or even just kill one of their friends. Ending your takeover of a human (besides the hazmat ones) causes them to burst as you transfer your mass to their insides, allowing you to rip through over-confident humans who thought they were safe behind a security gate. It is absolutely awesome.

There are even a few occasions where you go up against mechs and flying drones, but they can be dispatched with only a slight increase in the effort you normally make for humans. At one point in the game, two of the Vulcan-equipped mechs were released into a room after completing a puzzle in what was clearly meant to be an anxiety-inducing “oh shit” moment, and yet I think I destroyed both within 30 seconds. Perhaps the idea is that you’re over-powered, given the nature of your beast, but it doesn’t make gameplay particularly engaging. You do die fairly easily, as anything more powerful than the standard pistol-equipped humans can cut you down in only a few shots, but simply moving into a vent and popping out behind the enemy does the job every single time. 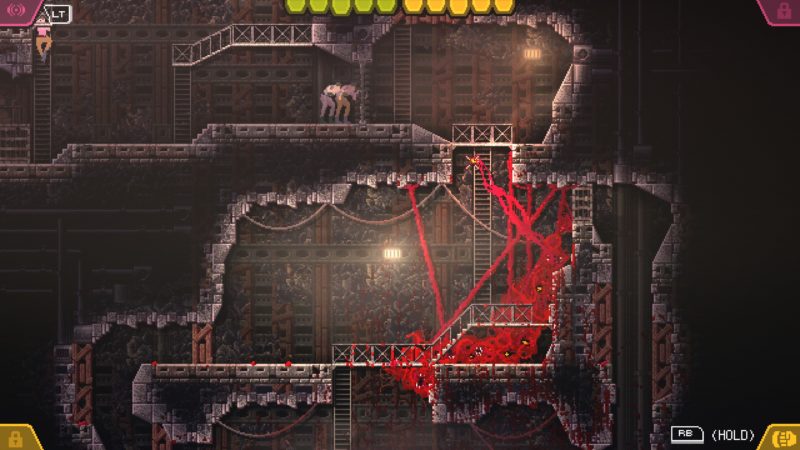 While the majority of the game is simply our beastly desire to feed and escape, there are a handful of sections where you play as a normal human in flashback sequences, but I struggle to understand their purpose. Theoretically, the idea is that they explain the background behind the events of the game, but the story told is incredibly simple and doesn’t shed much light beyond a twist so predictable you could probably guess it just by the name of the sequences. One of these, preferably in the final hour or so for maximum impact, would have sufficed in telling that backstory but there’s five or six throughout the game and they slow the momentum to a needless crawl.

Another issue I have is the lack of a map, which makes navigating almost impossible. The world is made up of Metroidvania-style interconnecting areas, with some being accessible via access tunnels that warp you from one end of the map to the other. Indeed, I found myself often completely discombobulated when unlocking a new one. Even if I recognized an older area it spat me out into, I would assume that there must be something I can interact with now thanks to a newly unlocked power, but would quickly become completely lost. You can tell where you’ve been thanks to the trail of blood you leave behind, but simply being in a room drenches it and eventually, the whole map is covered in blood and makes the idea of using it like a trail of meat crumbs nill. This happened not just in finding what I was supposed to be searching for, but even in finding my path back. 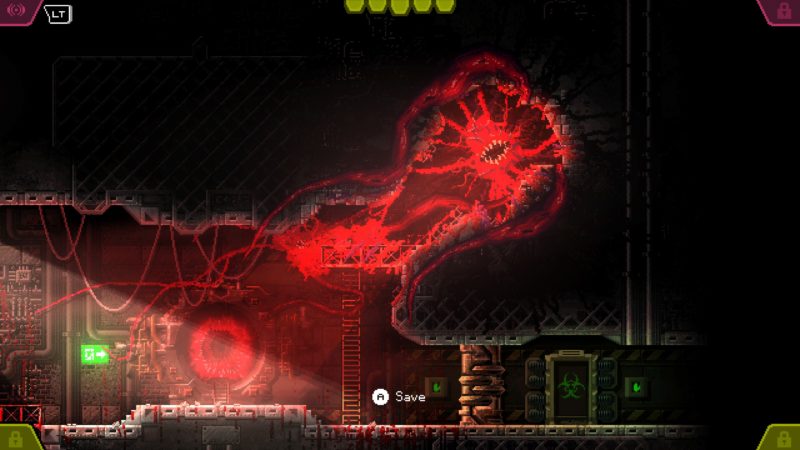 There’s an echolocation ability, but it’s close to useless as all it really does is point you in the vague direction of save-points (and later, corpses), which are plentiful enough that I never really ended up so lost that I was unable to find at least one of them. It’s frustrating and leads to lost time swinging through now empty areas in desperation to find something to do or- at the very least- a way back to where you’d been before. All of these are easily fixable problems and I really hope Phobia Games Studio patches in a map or at least a more useful version of the echolocation ability soon. It knee-caps some otherwise solid exploration.

Overall, I really did enjoy my time with Carrion, but I’m left with the sense that the experience is more of a proof-of-concept than a fully realized game. A sequel could easily iron out my issues with this title, but as it is, it mostly comes off as a really great central mechanic with an otherwise unremarkable (and easy) Metroidvania built around it. The Carrion itself is so awesome and killing the humans never, ever gets old, but everything else about the game design is too rudimentary (with a confusing layout on top of that) to truly stand out. I’m reminded of 2010’s Hydrophobia, which garnered quite a bit of hype thanks to a truly incredible liquid physics engine that still hasn’t been beaten (or arguably even matched) in games since — but ended up forgettable due to the rest of the game being ho-hum and clunky. Carrion is a way better game than that, but I’d recommend that you perhaps wait for a sale, or better yet, grab it via Xbox Game Pass. Hopefully, this concept does have a future (unlike Hydrophobia‘s water), because there is a ton of potential here — it just isn’t fully realized yet.

A Steam review copy was provided by the publisher, also available on Xbox One and Switch.