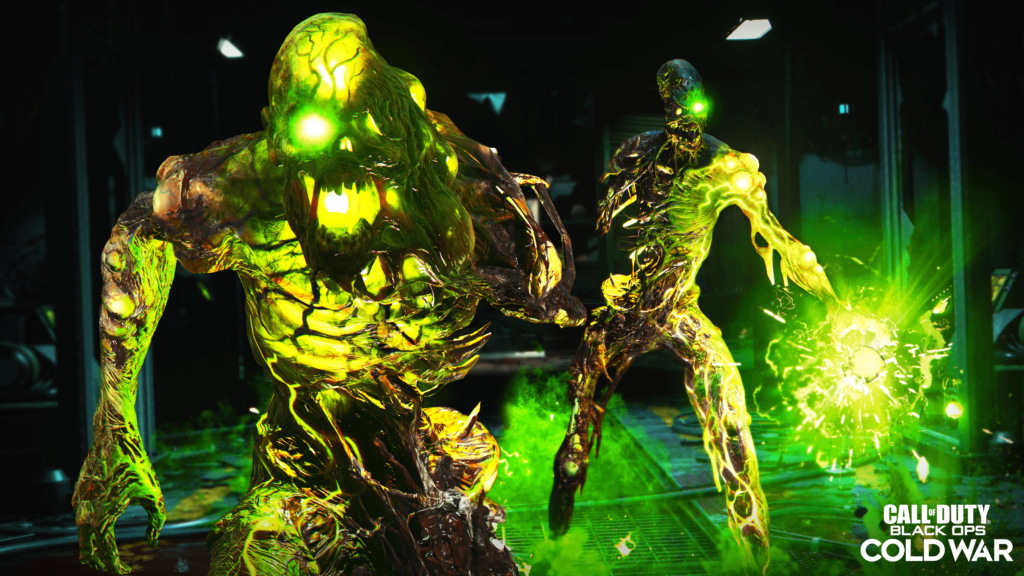 My relationship with Call of Duty Zombies has been tumultuous for quite a while now. As a fan of horror and first-person shooters, it was only natural that I’d be lured in by World at War’s new horde mode in which players would fend off hordes of undead Nazis. However, Treyarch’s last few installments in the franchise started to lose their way. I would personally cite the heightened focus on Easter Egg quest lines, terrible map design and the zombies themselves fading into the background of the narrative. With this in mind, I initially wrote off Call of Duty Black Ops: Cold War as delivering more of the same. However, after spending plenty of time playing the new Zombies mode, I find myself very pleasantly surprised.

Cold War melds various ideas from different eras of the Zombies mode. The fast-paced, movement-heavy gameplay of more recent Call of Duty entries remain. After only a couple of rounds, players will find themselves frantically weaving through crowds of the undead, creating a comparatively chaotic experience much quicker than usual. While this created a problem for previous Call of Duty games, this type of gameplay works infinitely better in Cold War Zombies thanks to its wildly different approach to map design. 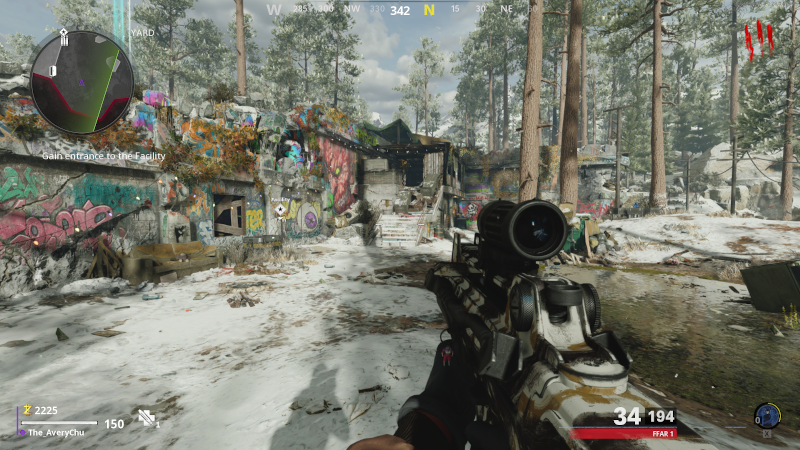 At the moment, Cold War Zombies only offers one Zombies map at launch. While this is fairly standard for the Call of Duty franchise, it’s still a shame to see that this trend has not changed. Despite this, Die Maschine is one of the best Zombies maps I have played in a long time. Unlike in previous entries, Die Maschine has a relatively simple layout with a healthy balance of open and high-risk areas, all of which are intelligently interconnected (an idea reminiscent of early Zombies titles). While the aforementioned Easter Egg quest lines are still present in Cold War Zombies, Die Maschine is designed with the interaction between players and zombies in mind, rather than a series of fetch quests, thus putting ‘horde mode’ gameplay back at the forefront. This is a massive course correction for Zombies; one I never would have expected, and I am extremely happy with the change.

Call of Duty’s signature Create-A-Class system returns in Cold War Zombies. However, unlike the preceding Black Ops IV, things have been streamlined and simplified significantly, another welcomed change. Players are able to choose their starting weapon as well as one special ability that can be triggered upon charge. The decision to let players spawn with any weapon has fairly significant ramifications on how players experience Zombies. Traditionally, there has always been this element of improvisation. Eventually, players would run out of ammo, and players would regularly find themselves at the mercy of the ‘Mystery Box’. That element of improvisation is completely dead in Cold War Zombies, thanks to ammo boxes located throughout the map.

Additionally, new currencies dropped by zombies have been introduced, allowing weapons to be even further upgraded. The end result is that most guns are viable for high round gameplay. There is a positive angle to this, as players now have the freedom to use whatever guns they like, and the downplayed significance of the Mystery Box means that lengthy and enjoyable Zombies matches are infinitely more likely. Cold War Zombies trades some of the mode’s challenge for heightened player choice. Whether or not this is a change for the better is understandably debatable, although I personally find myself preferring the new approach. 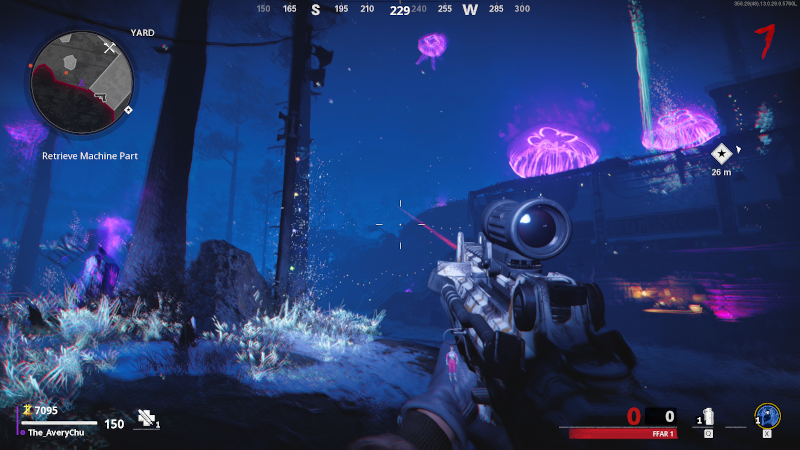 However, in regards to the presentation, Cold War Zombies drops the ball. Early iterations of the Zombies mode excelled at atmosphere. World at War’s Nazi Zombies had the sights and sound of a horror game. A basic shift in lighting, accompanied by ambient sounds and music, transformed these locations into something entirely new and unsettling. How does Die Maschine faire in comparison? The map itself takes place across two dimensions; Earth and the Dark Aether (the origin of zombies and various other monstrosities). Now, I mean it as a compliment when I say that the Dark Aether version of the map looks like a VR Chat world. Glowing crystals and neon jellyfish illuminate the sky, and ambient noise makes the player feel like they’re underwater, even though they clearly aren’t.

A lot of thought and effort went into how the Dark Aether would look and feel, which only highlights how comparatively boring the Earth dimension is. The Earth version of the map is brightly lit and without any sense of atmosphere, making Zombies tonally not feel any different from the Multiplayer. Occasionally a snowstorm will strike, obscuring the player’s vision in the process; an idea that could address the atmosphere issue as well as providing a unique gimmick, but unfortunately these snowstorms are too far and few between to really matter. This isn’t to say that Die Maschine is terrible looking. The graphical fidelity is on point, and Die Maschine isn’t visually confusing like the last two Black Ops games, but Treyarch has made much more exciting locations in the past.

On a somewhat related note, I’d like to talk a bit about Zombies’ ‘personality’. Zombies was always a horror mode, but it was one primarily concerned with having fun. There were light-hearted characters making whimsical comments and jokes that would offset the grim atmosphere-heavy setting in the process (think along the lines of Devil May Cry and early Resident Evil). As we mentioned earlier, the horror atmosphere isn’t here, but now Cold War Zombies utilizes the same bland ‘Operators’ seen in the Multiplayer, meaning that the levity those outlandish characters brought is now missing. There are a few new personalities that speak to the player via radio, but none of them are able to stand out in their own right. Although I’ve been talking about the characters thus far, I actually think the Pack-A-Punch machine illustrates this overall tonal shift towards bland seriousness quite eloquently. The video below compares the process of upgrading weapons in World at War versus Cold War Zombies.

In World at War, the Pack-A-Punch machine plays upbeat music and uses a unique animation to hype up the upgraded weaponry (of course, the player character makes a comment each time). In contrast, Cold War Zombies merely has a player press a button and that’s it.

The last few Black Ops games strayed away from the historical roots of the Zombies storyline. Instead, it adopted a storyline about alternate dimensions, time paradoxes, and Doctor Who aliens. Thankfully, Cold War Zombies acts as a soft-reboot, enabling zombies and Nazi experiments to take center stage once again. This isn’t to say that all of the preceding plot-elements are gone, but the central focus is now on a covert arms race between the United States and the Soviet Union, both vying for the technology and secrets the Nazis uncovered many years ago. Unfortunately, we can’t speak on the grand picture of the Cold War Zombies storyline at the moment. However, if the narrative continues to blend its fantastical elements with its historical setting, this could be yet another shift in priorities that will please a variety of fans.

We should probably take a moment to discuss Zombie Onslaught, that PlayStation-exclusive game mode. Zombie Onslaught is a spectacular display of not giving a shit. The entire premise of the mode barely even makes sense. In this mode, players follow a traveling orb around one of the Multiplayer maps and mindlessly kill zombies. That’s it. Enemies do not increase in numbers or strength and are always incredibly spread out. There is no means of upgrading weapons or equipment (not that it’s needed), other than scavenging the loot boss zombies drop. In all my time playing Zombie Onslaught, my friend and I literally could not die. We had to manually decide to end the match through suicide by zombie. It was then that we realized that after standing still for several seconds, the single zombie that arrived at our location had to hit each of us 9 times before going down. It’s painfully obvious that this mode was created as quickly as possible, with as little effort as possible, merely so Treyarch could fulfill an exclusivity deal.

If you’re an Xbox or PC player boycotting this game due to the timed-exclusivity, then more power to you. It’s a disgusting business practice that should not be encouraged. That being said, don’t think you’re getting an inferior product on Xbox or PC. The developers didn’t care about Zombie Onslaught and neither should you. 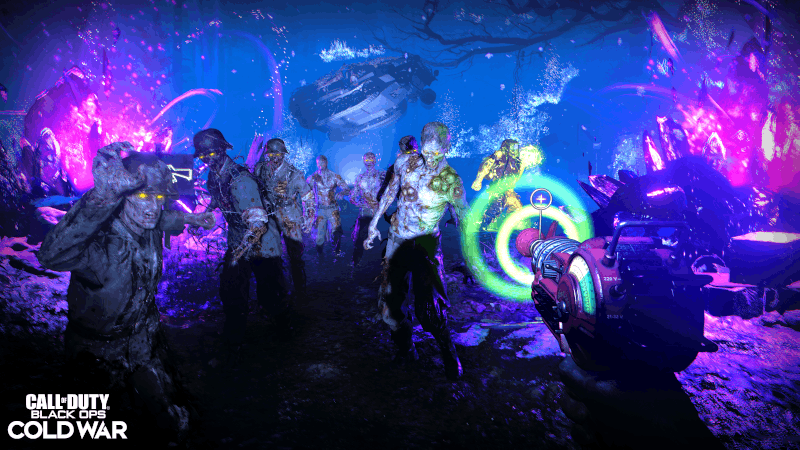 In conclusion, Black Ops: Cold War delivers some of the best gameplay the Zombies mode has seen yet. The shift towards horde mode gameplay and the refocusing on Nazi experiments gone wrong is an extremely refreshing change of pace.

There is still room for improvement, as the personality and presentation are seriously lacking, and Zombie Onslaught is downright pathetic. Despite this, Cold War still offers an infinitely brighter future for Zombies. As someone who wrote off the series for a long time, I’m now eager to see what Treyarch can deliver in future iterations.