Review: Bloodstained: Curse of the Moon 2 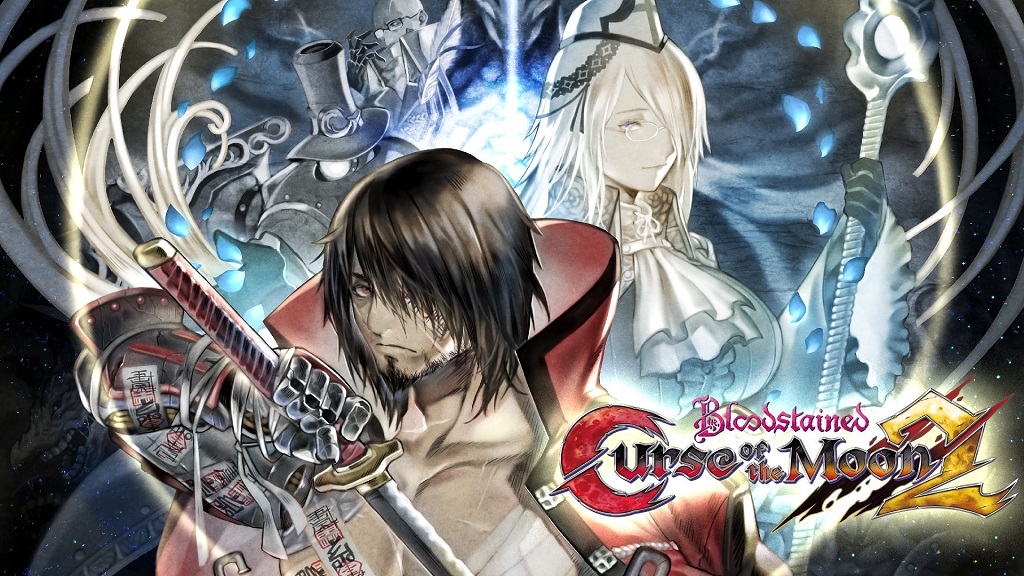 In some far-flung parallel universe, Bloodstained is an NES classic with three decades worth of beloved sequels and a shockingly decent Netflix adaptation. At least, that’s the wistful narrative Bloodstained: Curse Of The Moon 2 and its prequel push. This totally-not-Castlevania side-scrolling action platformer excels at harmonious tag-team combat and wild platforming sections, but some intentionally stiff controls got on nerves. Curse Of The Moon 2 is often needlessly preoccupied with homage rather than fun.

Like the first game, Bloodstained: Curse of the Moon 2‘s 8-bit motif is pure, unmitigated nostalgia for fans of the classic Castlevania games. The NES was before my time, yet still, it was hard not to smile over the garbled beeps and boops that pass as a werewolf’s howl, or the lo-fi pixel art of an explosion when you stick a demon with the pointy end of a blade. It’s a retro schtick that never gets obnoxious, and for me, that’s mostly thanks to the clever character-swapping mechanic never taking a back seat to aesthetics. 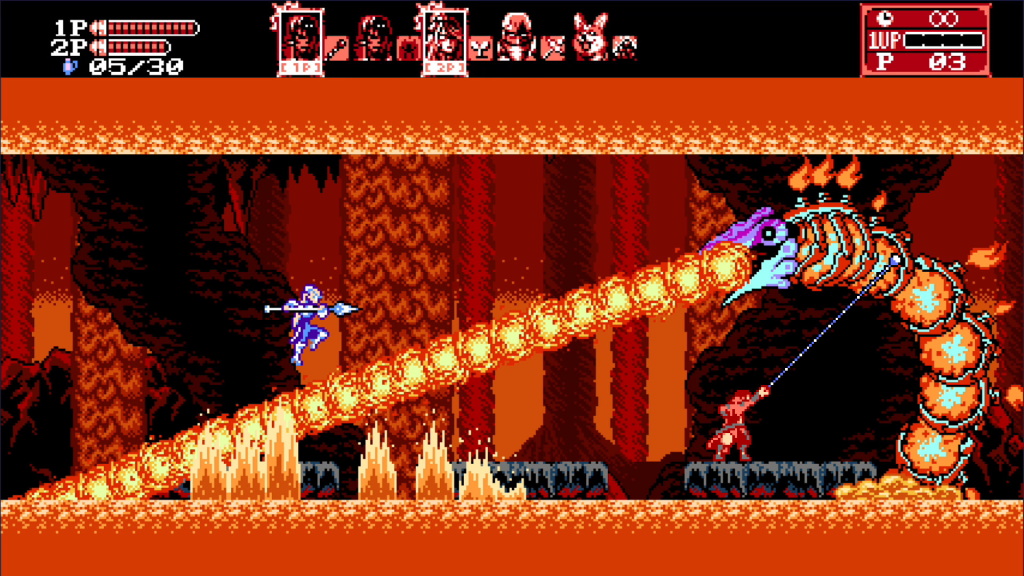 The brilliant tag-team action from Bloodstained: Curse Of The Moon is back in the sequel. Once again, there are four heroes to choose from, each with a unique weapon, several secondary abilities, and a particular utility. One well-placed sword strike from Zangetsu, the demon-hunting blade master, was enough to remind me why he was my go-to in the first game. He’s the jack-of-all-trades, able to quickly dish out a flurry of sword slashes, mincing whatever poor demonic sod might be on the receiving end. He also eases you into secondary abilities with grace, whether with an angular whip crack to hit hard-to-reach flying demons, or explosive incantations releasing an onslaught of damage at the more armored foes. While I’m still particularly fond of Zangetsu, the three new characters in Bloodstained: Curse Of The Moon 2 stole the show.

If you’re looking for a character with more kick in their step, then Dominique, the exorcist adept with polearms, is your girl. She can leap much farther than Zangetsu, and even use her polearm to pogo stick off enemies to reach far-off platforms. Her healing and resurrection abilities are a huge plus too. Though she’s not the master of range, that honor goes to Robert, a grizzled sniper. If a troublesome archer is causing you grief, Robert can prone and pick them off from across the screen. I had a good chuckle at Robert’s expense, as it’s just goofy unloading bazooka shells on zombies or lobbing comically large spears at spiders. Astoundingly, Robert is nowhere near the funniest member of the cast. After all, Hachi is a corgi in a mech suit. Strapped with wrecking balls on his suit’s arms and hover-jets aiding his jumps, this furry little bastard can tank damage like nobody’s business. Even the dreaded spikes-on-the-ground that skewer the other party members are child’s play for Hachi since his suit can turn invulnerable for a time. Each character complements the others well, and molding their skill sets together is where the fun began for me. 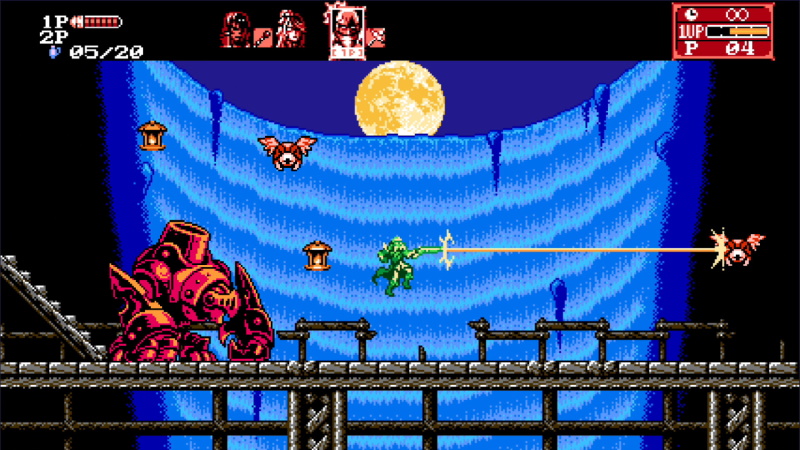 During the obligatory fiery-volcano stage, I had to employ a good deal of team synergy to reduce my chances of a charred game over screen. There were stationary mounds of flesh and bone hurling explosives my way, conveniently placed before a cavernous pit that would require a running start to jump over. So I marched forward with Zangetsu, offing the ugly masses with his sword, then swapping to Dominique for some nimble leaps both to make it across the pits and for dodging incoming explosives. This strategy worked for a bit, but flying skulls and rotating platforms joined the fray. Halfway through Dominique’s jumps, I swapped to Robert to pick off the skulls midair, then went back to Dominique before her boots hit the ground. As this level got more chaotic, I cheesed a few areas with Hachi’s hover jets and invulnerability, just as a bit of reprieve. It’s incredibly satisfying to carve a path through stages using your whole team’s skills.

This stage, unfortunately, also highlighted how needlessly frustrating Bloodstained: Curse Of The Moon 2 can be. Mainly due to enemy hits knocking you back, an abundance of bottomless pits, and questionable hitboxes. If I ground my teeth together every time a random projectile sent my character flying into a nothingness-hole, I’d be gumming dust. I get it, this is a mainstay of platformers, but after last year’s Bloodstained: Ritual Of The Night, where falling down a hole didn’t result in an instadeath, it’s fucking tiring. It also doesn’t help that due to the NES-devotion, jumping is sluggish as all hell. You can’t course-correct or slightly shift the trajectory of where a character might land, so one misplaced jump can screw you over. Worse yet, there were a few times I was sure I successfully leaped over an enemy but was punished anyway. It didn’t happen too often, but it was enough to make me cock a brow.

The good news is there are pretty handy difficulty modifiers in Bloodstained: Curse Of The Moon 2. If you’re a scrub, like me, casual mode adds more checkpoints throughout stages, gets rid of the irritating knock-back, and provides infinite continues. For my first playthrough on veteran, it took me five hours to complete all eight stages. Plotting that same course on casual halved that time; it was a total cakewalk by comparison. Which is fine by me — sometimes it’s nice to kick back, relax, and explore without the looming threat of death hovering above your head. 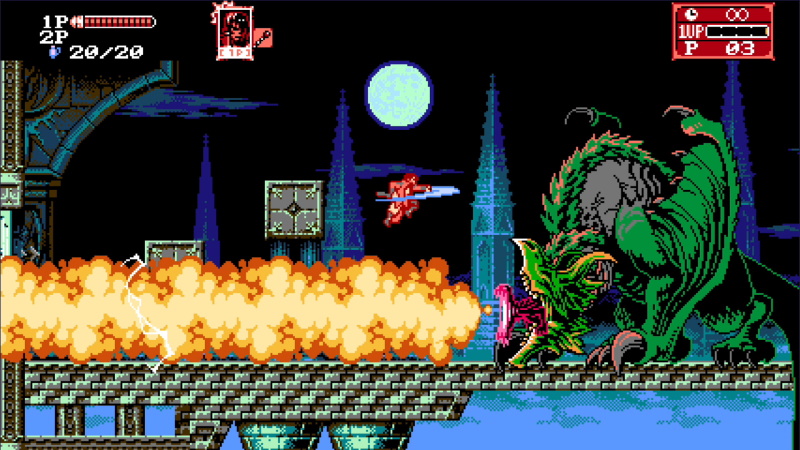 Despite the campaign’s brevity, there’s tons of replay value here. Just “beating” Bloodstained: Curse Of The Moon 2 only gives you a sliver of an ending, and several subsequent playthroughs are a must if you want to see the real finale. Think NieR: Automata‘s narrative structure, only with less Freudian imagery. The coolest part is that subsequent playthroughs will spice things up by changing the behavior patterns of enemies and bosses. Suddenly, a big fire-breathing dragon can fling lightning when they didn’t do so before. Be it remixed enemy spawns, hidden-away locales to uncover, and extra bosses –there’s plenty of reasons to roam through this haunted land multiple times.

While the adherence to the troubling pitfalls of yesteryear’s action platformers was a bit staunch for my liking, I still had loads of fun battling the legions of hell. The snappy synergy between the cast allows for some beautiful experimentation, and the stage remixes will keep me coming back for some time to come. If nostalgia is a double-edged sword, then Bloodstained: Curse Of The Moon 2 rarely falls on the pointy end.

A Nintendo Switch review code was provided by the developer.