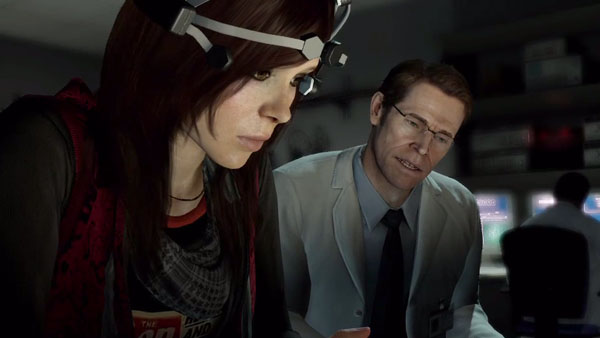 What happens after we die? This isn’t a religion forum, but it’s a question worth pondering. Regardless of your beliefs, us horror fans like to think that ghosts wander around, spectating our daily lives. We also like to believe some of those ghosts are a little more fiendish, haunting certain places, getting pleasure from messing with us. On a more somber, but heartwarming note, it’s nice to think about us still being a part of a loved one’s life even after we pass. Beyond: Two Souls, the latest game from Quantic Dream, is all about this.

And in case you haven’t noticed, the game stars Ellen Page and Willem Dafoe. 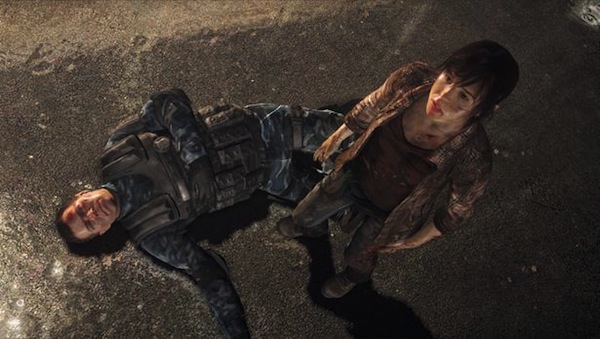 Beyond succeeded in having me fully engaged with its flawed, but emotional story centered on Jodie and the many hardships she faces in her tough life. You see, she isn’t an ordinary girl. She’s connected to an entity named Aiden. And she has been from the moment she was born. It’s this aspect of her character that serves as an intuitive and refreshing gameplay hook throughout the game’s roughly 8-hour duration.  And there’s the buzz word, “gameplay.” Before I talk about what matters most in Beyond (the actual story and presentation), let me start off by focusing on what makes the game…well…a game.

Right off the bat, Beyond offers more freedom and gameplay scenarios than Quantic Dream’s previous effort, Heavy Rain, did. Where it falls behind Heavy Rain a bit is in the dialogue choice mechanic. There needed to be more of that here, and the instances that do have branching dialogue options don’t really lead to drastically different results (the same goes for the big decision you need to make at the end of the game). Having said that, Beyond feels more linear, from a story perspective. You’re being guided to stick close to the story Cage and his team have crafted, and I honestly didn’t find any problem with that. Especially with more freedom in movement, though a bit clunky, and actions you can perform as you go from chapter to chapter. You aren’t entirely free to do as you please, but you’ll take part in a broad range of activities from smaller tasks like drawing and playing a guitar to more involved instances like partaking in set-piece stealth segments amidst bombastic shootouts. Yeah, even a game as ambitious as Beyond can’t escape mainstream tropes. 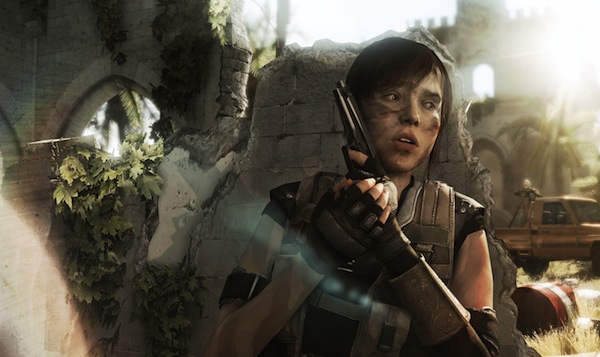 The action-packed moments are where the game falls a bit flat, coming off as cliche. I much preferred performing the quieter actions, which helped push the story forward without having to rely on typical AAA action-game nonsense. However, stealth works nicely here, thanks in large part to Aiden. Players are able to switch to Aiden most of the time throughout the game (unless the story doesn’t call for it). Doing so really makes you feel like you’re playing as an entity moving around freely through your immediate surrounding. You can’t stray too far from Jodie, because of story reasons which eventually get explained. The controls for Aiden are easy to use, and his possession/ simple telekinetic abilities are pretty neat and satisfying to pull off. The first time I possessed an armed soldier, or choked him to death, I was grinning from ear to ear. But this act eventually ends up becoming a bit repetitive. I would loved to have seen some more inventive ways of dispatching foes, like more kills using the environment for one (there were only a handful of moments like this). You can also utilize the game’s companion app on your smartphone to control Aiden, though I wouldn’t really recommend it. It doesn’t give you precise control, naturally, and it seems to lose connection with the game often. One game that was constantly on my mind while playing as Aiden was Geist (remember that?).

My favorite ability of Aiden’s is being able to see the cause of death for a corpse. Actually performing it may be a bit tricky initially, making you guide a blue stream of spiritual energy to Jodie’s head (which isn’t as easy as it sounds), but it’s neat to see exactly what happened in a given area that lead to one’s death. This ability was used perfectly in a survival-horror-style chapter in the game, that ended up being my favorite. It really brought the atmosphere to life and made you feel even more tense as you made your way through a now-haunted facility. It was thrilling, and I was truly surprised by how solid a survival horror experience this one chapter was (there are other chapters with horror elements, though not as profound as this one). Then we have the actual combat mechanics. Yes, Jodie packs quite a punch!

Melee attacks are performed by following on-screen directional prompts, as indicated by Jodie’s actual movements. See Jodie loading up a right hook to a foe? Then move the stick to match the same direction that hit will go. The same goes for dodging attacks, though this can prove to be a little problematic at times, because it won’t always be completely clear which direction we’re supposed to be moving in (sounds dumb, but you’ll see what I mean when you put it to practice). At times, I could’ve sworn I was supposed to shift the stick in a certain direction, only to be faced with the opposite. The funny thing is, even if you fail countless times at dodging attacks or knocking foes out, there’s no way to actually lose in this game. There’s no actual “game over” as gamers have come to expect. This seems like a departure for the team, following the ability to actually have main characters die in Heavy Rain. The story just keeps going despite your failure to act in tune with the required timing for the QTEs. And, boy, what a story it is. 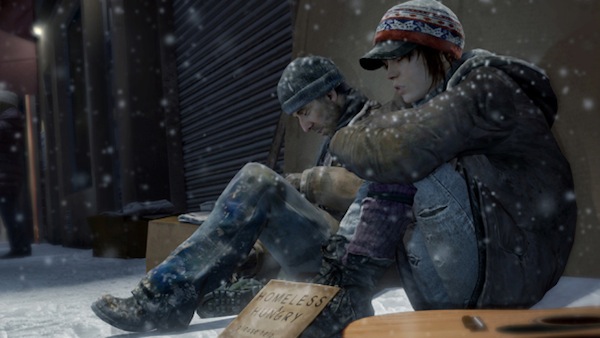 My one major complaint early on with the plot was how it was fragmented, with chapters not sequenced in chronological order. It all makes sense in the end, but it would’ve helped a few of the game’s emotional scenes even more if the characters involved appeared in a few more chapters previously. Regardless, you really do get a sense that you’ve lived through a troubled person’s life throughout the game. And you can’t help but feel sympathy for Jodie; she goes through hell and back in many stages of her life. So when that monumental final decision comes up at the end of the game, the choice isn’t really an easy one to make. The story also has moments rich with cheese, but overall, it flows nicely and keeps you grasped like someone on the receiving end of Aiden’s powers. Though it does lack a central focus.

It isn’t until the latter half of the experience that the true threat and overall point of the story emerges. Everything else makes Beyond feel like a messed up biography of a young girl who can interact with the dead. My other major complaint with the story pertains to certain key characters and their respective arcs. One in particular really struck me as having quite an odd development. It seems like said character ends up filling a certain role towards the end of the game just to fulfill what many see as a mandatory “villain” role. It felt forced and totally lessened what was, up until that point, a very well-written character. One thing that remains consistent amongst the main characters, however, is the outstanding quality of performance.

Ellen Page is amazing as Jodie Holmes. It’s a role she seems quite apt for, too, taking her previous roles in films into consideration. She steals the show, and makes every struggle she faces all the more emotional to us players. You will definitely feel for her as she has her heart broken, or gets pit in a Carrie-like scenario at a friend’s party, or when she simply tires of being used for others gains. You’ll be there in her darkest moments, and you’ll cheer her on when things finally show a sliver of hope. But then the script throws her back down to the ground, not happy to see her be all smiles for more than a mere moment. The acting in the game is astoundingly believable. It truly feels like you’re playing an interactive film. Much praise should be given to Page, Willem Dafoe, and the entire principal cast here. From a presentation standpoint, this truly feels like a next-gen game, now. The music isn’t as strong, though. The soundtrack has some good tracks but it’s nothing truly special.

Beyond: Two Souls may be a tough sell to gamers brought up with the likes of Call of Duty and other such action-packed games we’re flooded with today. But it’s truly a memorable, albeit flawed experience. It’s another great example of Sony’s amazing first-party portfolio and another excellent outing from Quantic Dream. You may walk away from the game wishing for your very own companion entity. Just be prepared for a pretty crappy life…