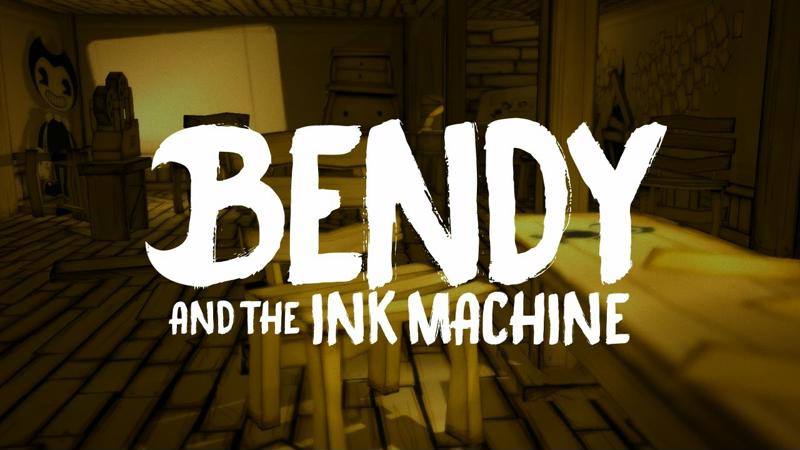 Old cartoons have always been a little odd to me. Aside from the natural creepiness that just comes from stuff that’s old, classic cartoons threw away the laws of physics and commonly involved dark themes and characters killing each other in creative ways. I always felt like those black-and-white animations were one slip away from falling into horror territory, and Bendy and the Ink Machine reinforces that feeling.

As the debut game from theMeatly and Mike Mood, Bendy was greenlit on Steam back in April and has been increasing in popularity ever since, partly due to its streamable and Let’s Playable elements. It’s worth noting that the devs have consistently released updates and bug fixes since the game’s initial release, taking community feedback into consideration. It seems like a lot of love has gone into — and is still going into — Bendy‘s development. 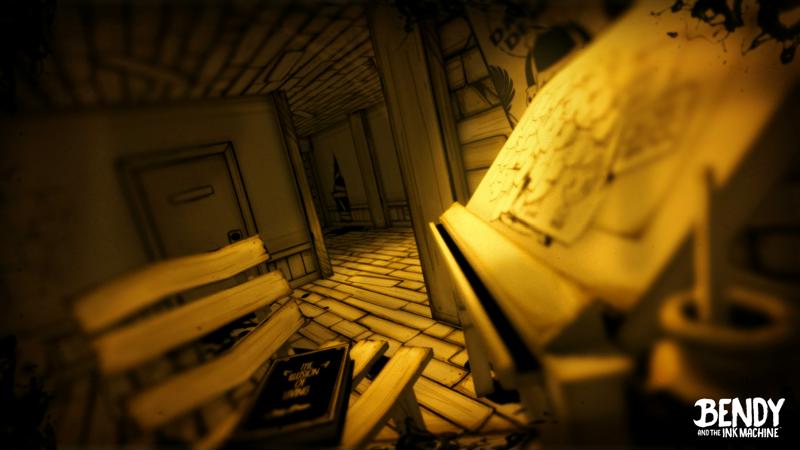 You play as Henry, an animator who’s been asked to stop by the studio he used to work for by the owner, his old pal Joey Drew. Things have gone horribly wrong since you clocked out for the last time, and the studio is falling apart. Cobwebs and dislodged wooden boards litter the area. The ink machine, which once faithfully pumped out the studio’s lifeblood, is on the fritz. Ink seeps through the walls, gushes from pipes, and makes certain floors unexplorable until you find a way to drain it. And someone else is moving through the studio, writing messages on walls and messing with your perception. As you progress in each chapter, you gradually piece together what’s been going on through audio logs and limited interactions with other characters.

Five chapters are planned in total, but three have been released so far. Each chapter increases both in length and depth of experience. Chapter One is free to play and only takes about a half hour to get through. It feels a bit like a tutorial, guiding you to interact with the environment and solve simple puzzles. Most importantly, it introduces you to Bendy and his shenanigans. Chapter Two introduces combat and raises the stakes a bit. The plot thickens and so does the ink, as you wade through literal corridors of it and your ax becomes a weapon against inky enemies. 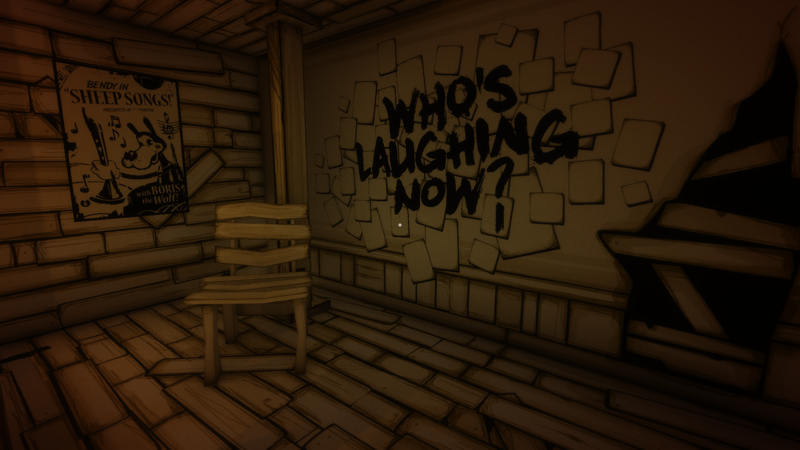 Chapter Three is where Bendy really takes off, getting into the meat of the story and throwing you into the action. If you’re tired of jump scares and collection quests, though, then you might not like the action. One of the characters calls you an “errand boy,” and I wondered if this was intentional self-awareness because that’s exactly what the game turns you into. The third chapter is a series of fetch quests for which you’re given a variety of weapons or tools to assist you.

As you move through each area picking up items and solving puzzles, the eponymous Bendy is an ever-looming presence. He could pop up at any moment and pursue you, prompting you to find a place to hide until the threat is over. In this way, the game throws several common horror tropes at you at once. You’re being stalked, you’re retracing your steps, you’re picking up items, and you’re dealing with jump scares. The thing is, while I normally wouldn’t be a fan of this style, it worked for me in Bendy because the game is so clever in other areas that I almost wonder if it’s poking fun at itself. For example, your companion during all the fetching is a dog. I can appreciate the irony. 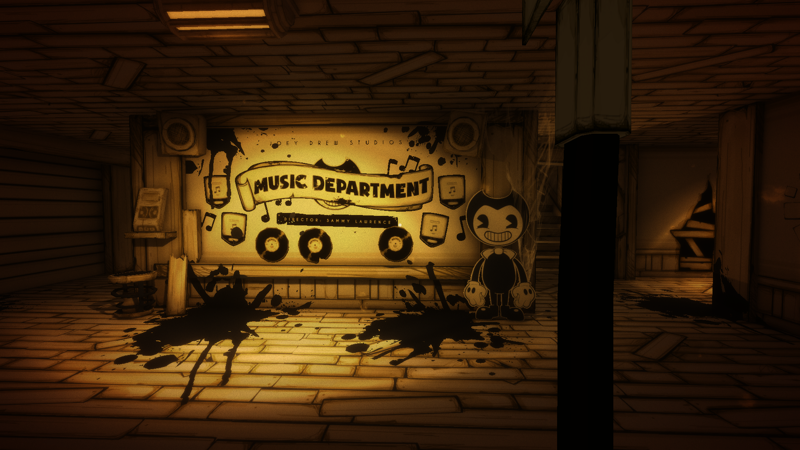 The game’s environments are a strange amalgamation of the world within the cartoons and the studio in which they were created. It’s as though the creators have merged with their characters and the line between reality and fiction is erased. There’s some beautiful rendering. A yellow glow settles in every room and the depth of field adds a softness to the setting, giving it an antiquated feel. The hand-drawn assets are engaging and add a lot to the sense that you’re a part of this strange world. Cans of bacon soup serve as collectibles for you to pick up, and I enjoyed seeing posters of Bendy advertising the soup later on. You can interact with projectors that display animated scenes on the wall and musical instruments that play a pretty tune. It really is a lovely dark world to look at.

Woven deftly throughout all three chapters is some incredible music and voice acting. The soundtrack is reminiscent of the old cartoons the game takes inspiration from, with jangly piano numbers and orchestral pieces that change according to your situation. The voice acting sounds like it came straight out of films from the ’20s or ’30s, when everyone sounded animated when they spoke. I particularly love Henry’s voice, which is soothing in spite of everything, even as he wonders aloud about what’s happening. 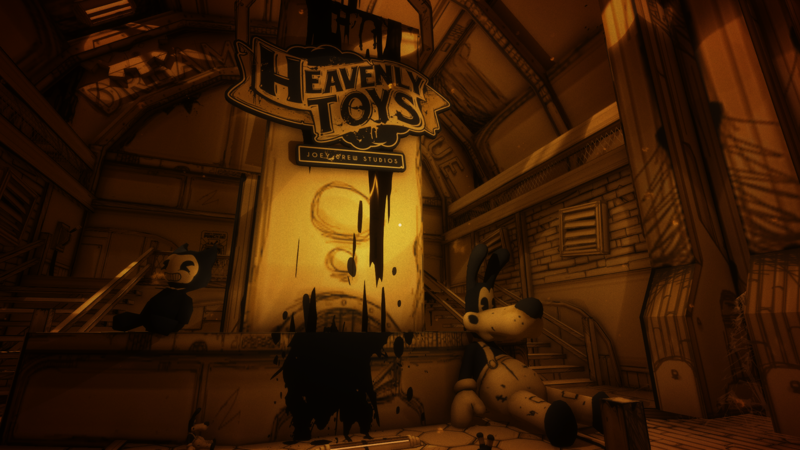 I’m divided about my feelings toward Bendy because it seems geared toward Youtubers and streamers, and I think its combat and mechanics would work well for VR, but playing it by myself sans virtual reality, I found that the gameplay leaves much to be desired. The enemies die easily, with only one or two whacks of whichever weapon you’re wielding. The puzzles are simplistic, and item collection really just serves as an excuse to throw some quick scares at you. If I’m judging Bendy based on how you interact with its environments alone, then it really doesn’t serve up anything new or interesting.

Thankfully, Bendy has more to offer than that. The overall design and aesthetic make spending time in the game’s animated world worthwhile. From a ragtag trio called The Butcher Gang to the twisted Projectionist, the enemy design is fantastic. I’m interested in learning more about Alice Angel, Boris, Joey Drew, and of course the dancing demon himself, Bendy. I particularly want to know more about Henry, the protagonist, who seems mysteriously resigned to everything that’s going on around him, and whose relationship with Joey hasn’t been explored in depth yet. All the characters seem ambiguous, as though they could help or impede you at the flip of a switch. I want to hear more of that old-timey music and see more crazy ink drawings come to life and try to kill me. I’ll keep playing for those reasons.

Bendy and the Ink Machine is available on Steam for PC and Mac. Chapter One is free, and Chapters Two and Three are $5.99 each. Chapters Four and Five are currently TBA, but we’ll bring you updates as they’re released.