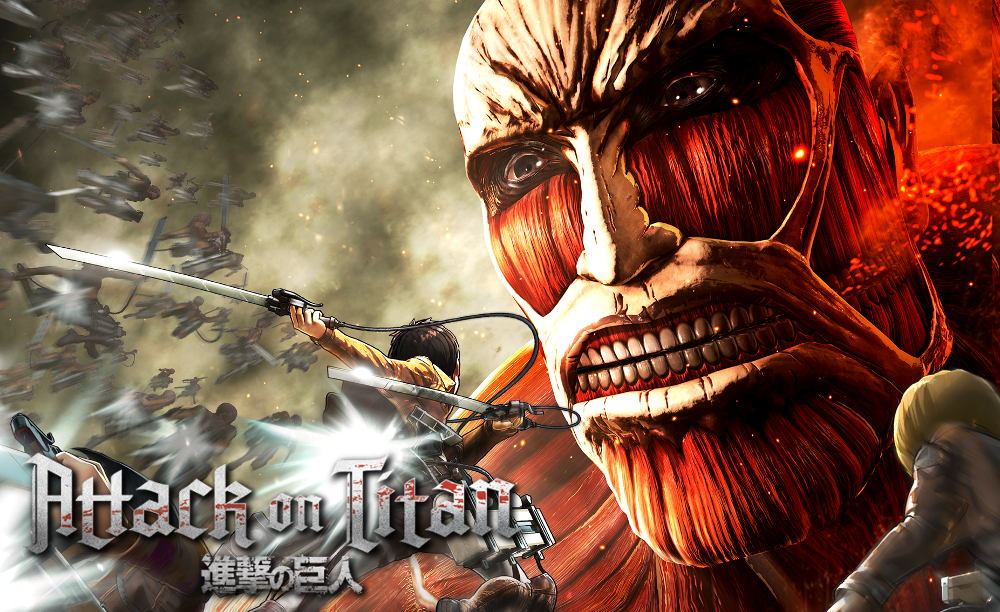 About three years after the anime aired and some time before the second season starts, Koei Tecmo’s Attack on Titan game has certainly come at a weird moment, but as this hack and slash game (in a literal sense) shows, it’s a perfect treat for fans of AOT that need their bloody voids filled.

NOTE: This review avoids most major spoilers from the series.

To describe Attack on Titan in a sentence, giant naked humanoids have pushed humanity to the brink of extinction by eating them, and you play as a group of soldiers who battle against them with gas-propelled belts, Spider-Man-like swinging, and really sharp swords. Explaining this series to newcomers can certainly take awhile, but this game will get you up to speed in an abridged fashion. Going through the (current) events of the anime, the Story Mode retells nearly all of the key moments along with fan-service filled nods to memorable scenes. For those hungry for more than what they already have seen, AOT includes one manga-exclusive enemy after the main plot, for when things get really hairy. 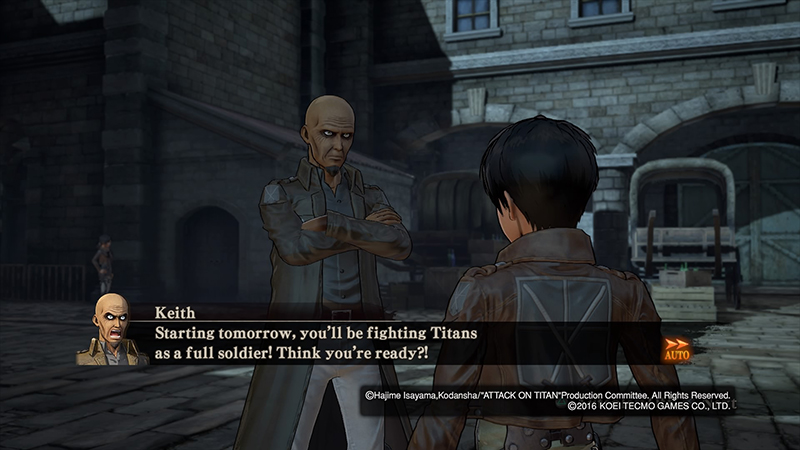 While the game can certainly be played by those who aren’t fans of the series, a lot of plot details and impactful moments are glossed over with the predictable pacing of a video game, as well as the omission of the franchise’s political conspiracy moments. Even these scenarios are tooled around a bit though to fill out the campaign. In example, before Eren gets to square off against the Colossal Titan in the franchise’s most iconic still image, he gets to (noncanonically) fight some smaller titans that break though the crack in the Wall. The middle of the game also gives as much time with Levi’s Special Operation Squad as the rest of the Survey Corps rookies, so if you find a character like Hange Zoë annoying, a third of the game might be insufferable from a narrative standpoint. However, I must admit playing the game had me hyped up enough to catch up on about two years of the manga I was missing. 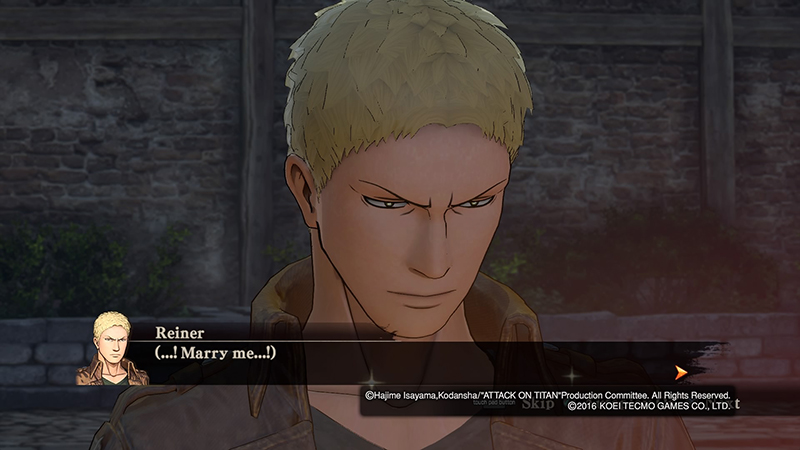 I’m happy to report that the game controls very well… 95% of the time. There will be short, unavoidable moments throughout each mission where your camera will whip around, you’ll have trouble getting around tall terrain, and find yourself fighting with targeting when there’s more than two giants onscreen at once, but when the game actually works, it feels like second nature. While it may take a moment during your first hour to get a handle on the controls, by endgame (and with a few upgrades) you’ll be able to kill upwards of four titans without touching the ground. While perhaps not on the same level as some Spider-Man games, swinging around with your wires gives a great sense of speed and you’ll have to pay slight attention to the environment as it does determine your velocity and angle of swinging. Although each enemy is killed in the same way (being sliced at the nape of the neck), the game gets more complex as different body parts drop loot, need to be destroyed first, and boss units get involved with different movesets. 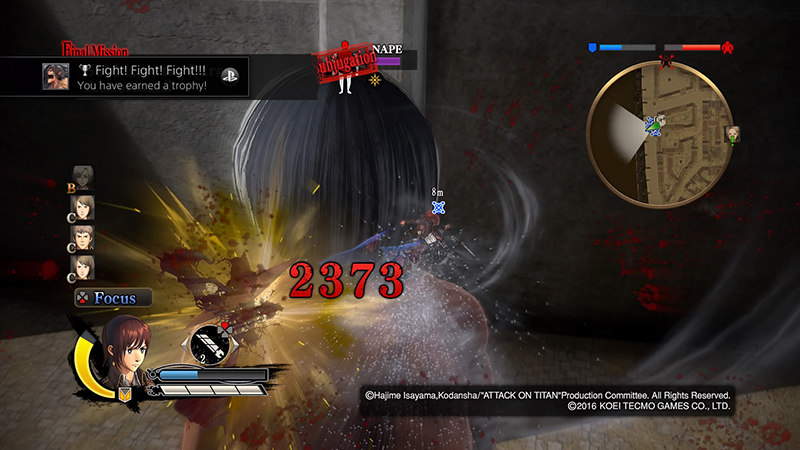 Like the series it came from, death is always on the horizon. You can take one warning hit before death and when another attack has a chance of hitting you, time slows down for a moment to give you a chance to dash away. You’re not armed with just blades however, as the game progresses, the squad gets access to distraction bombs, healing potions, and equipment replenishment items. The latter of which is vital as your blades will dull and you will run out of gas very easily. 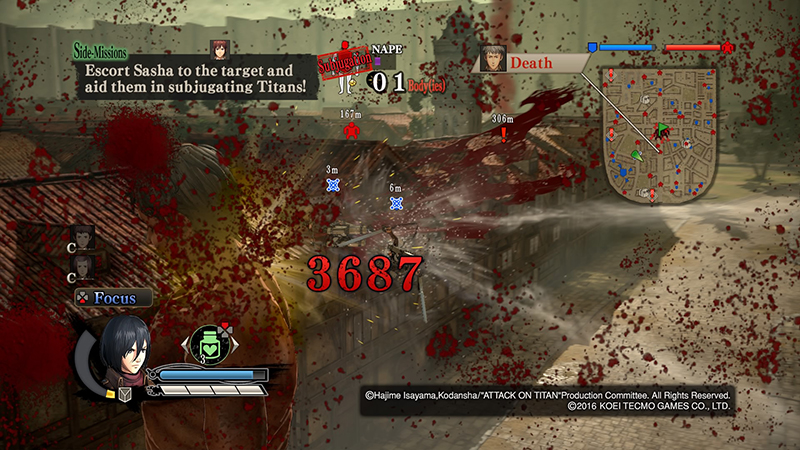 Despite all the fancy mechanics, the game is still at heart using the same system as a Warriors game, and with that comes what everyone has come to expect from that empire of titles. Between missions, you can traverse a limited hub world with equipment crafting, a mission board, mission replays, and quest NPCs that give you extra objectives to prioritize during gameplay. Often, especially at the start of the game, you’ll be completing objectives far before the dialogue for them finish; you can spend up to 20 seconds standing around waiting for the next event to pop-off in Story Mode.

You’ll be using Eren, Mikasa, Armin, and Levi exclusively during the story in addition to six other characters with various skills to employ for Free Missions/Multiplayer. While some abilities are shared between characters (just learnt at different levels), someone like Armin who relies on commanding other teammates feels different than Mikasa who does a lot of damage really fast at the expense of her other traits. 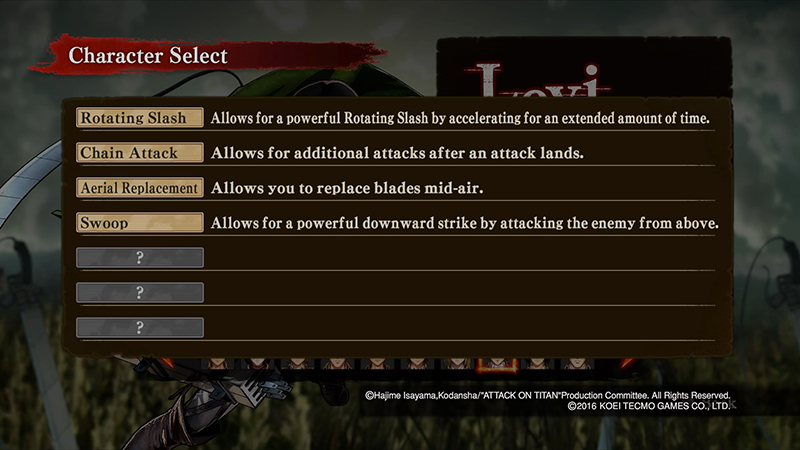 While the main campaign took 6-7 hours, I’ve doubled my gameplay time by traversing through just 40% of the post-game content. As with any other Koei game, the extra missions will make up the bulk of playtime and that allows you to use a wealth of non-story characters in prefab scenarios. And like said Koei games, these extra missions sadly lack personality, just replacing different side-missions and enemy types on maps with higher difficulties. Each outing also has (usually) two side objectives that require you to kill a certain amount of titans as well as successfully complete all the side-missions in a stage. Doing so will make a stronger than normal titan appear that drops better loot. Along with harder to kill targets, the stats on enemies get much higher as you progress and thus increase your item usage. This proves to be annoying as near the end of some stages, as I was just completely out of gas and blades, so even individual battles became a slog. 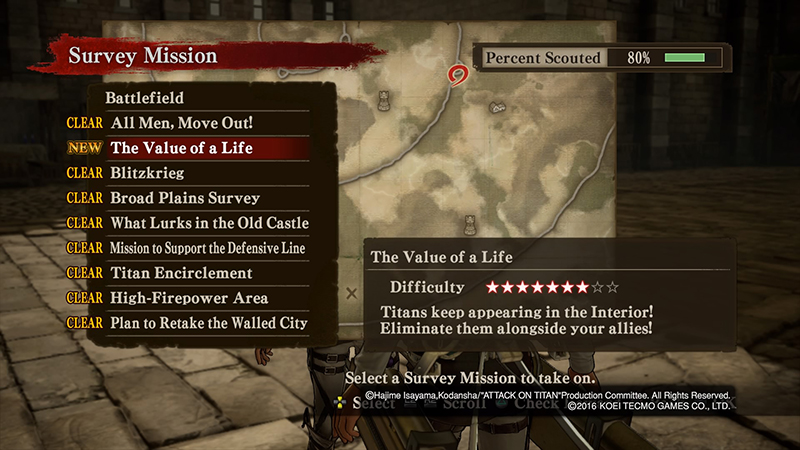 This is the Warrior’s game typical way of padding out the longevity of the game – by making you grind for specific materials over and over to strengthen and evolve your equipment. The saving grace that kept me coming back is that the core combat is REALLY enjoyable. Like Dynasty Warriors: Gundam or the other anime licensed games, the scope of enemies you’re fighting does extend past the “capabilities” characters actually have in their respective series. While Levi in the anime has over 30 confirmed kills in total, you’ll be doing about that much in every mission if you want a good grade. This power fantasy does detract from the grim nature of the source material, but considering how difficult it can get, it finds a balance that slightly skews towards the player. In terms of feeling like a badass when you got everything on lock, mission complete. 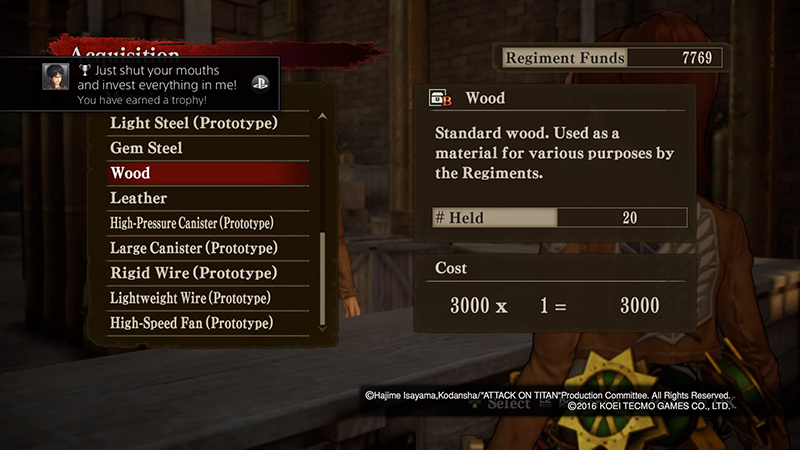 Being a mission-based game with a lobby, the title comes with online co-op so you can suffer grinding together with teams of up to four. Based on each character’s individual skills, there’s definitely some options for synergy, although there will be quite a number of moments in which your target will be eliminated by an ally mid-attack. This mode does make missions much easier despite boosted high enemy health since titans can’t concentrate on attacking everyone at once. 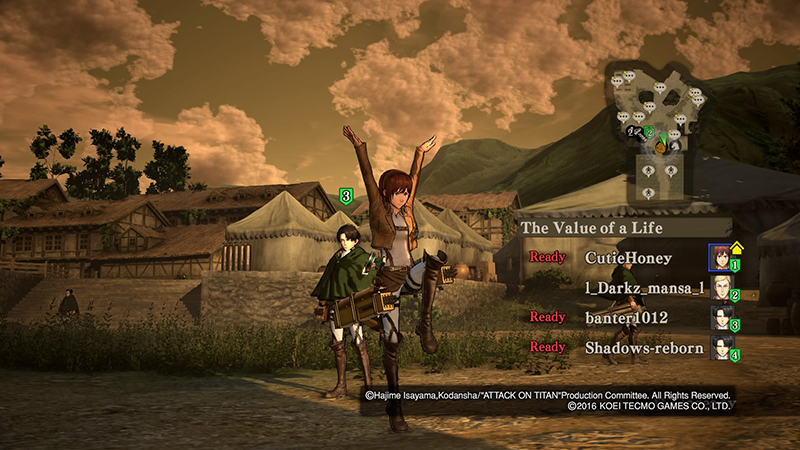 In terms of presentation, while the game doesn’t provide licensed music, the included soundtrack matches the mood accurately. Visuals are par for the course with Koei’s reputation (good), but they deserve some credit for accurately depicting each character’s appearance and creating a library of creepy titans with not too much duplication occurring in their builds and facial features. Occasional framerate dips do happen, even on the PS4, so be wary. Attack on Titan is also Japanese audio only, so if you can’t keep up with dialogue as it’s speedily occurring, that might be an issue.

Overall, Attack on Titan is a more than serviceable title that has fulfilling combat. Unfortunately that diminishes with the more time you dig into the additional soulless battles after the main course is over. However, if Koei titles are good at one thing, it’s getting plenty of hours of gameplay out of the standard $60 price tag, and there is an undeniable thrill of charging into battle with your diverse comrades who can help you get even stronger. If you need a decent licensed game with a unique swing on things, charging headfirst into this very, very ‘anime’ game wouldn’t be the worst decision you could make.

A review copy of the game was provided by the publisher for Playstation 4. The game is also available on the Playstation 3, Xbox One, PS Vita, and PC.