Preface: Due to a save-corrupting regional bug on the Steam release experienced during pre-release, the following review was made after the writer lost 9 full hours of progress. In order to get the review out while the game is still relevant, the writer could not complete all of the story content, however, based on the time they’ve committed, they believe they’ve received a full experience of this game’s contents. It’s believed at this time that the bug will not affect any new players of the game.

With their fair share of successes and failures over the years, the one thing Koei Tecmo has been consistent on is milking the better titles for sequels and updated ports. So it was no big surprise that 2016’s Attack on Titan would inevitably get a follow up. While similar looking on a surface level, this sequel does sport a few new features that might make a return trip to a land with giant, hungry, naked men appealing. 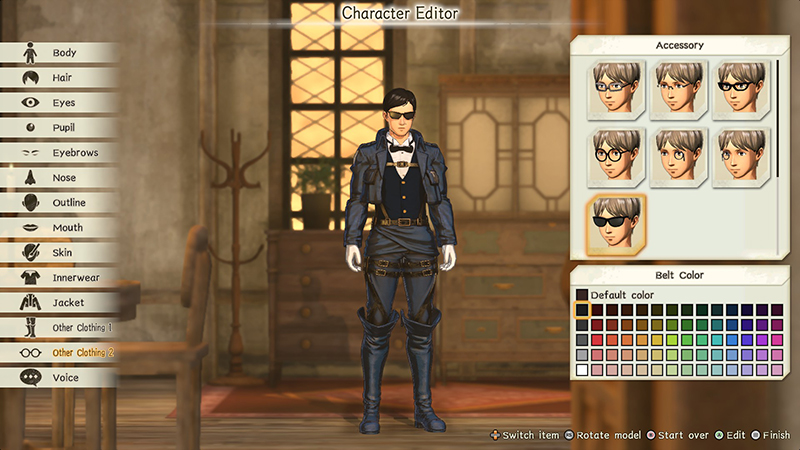 Attack on Titan 2 is the expected follow up to the 2016 game… based on the 2013 anime… based on the 2009 manga. The legacy that has been mounting up for nearly the last decade is a little hard to keep up with, but fortunately this game serves as a decent entry point. You play as your own custom-made hero that teams up with the franchise’s main protagonists and get to rewrite a bit of history as you form friendships with both on-edge allies and potential enemies. The character creator is a pretty robust suite that gives you plenty of options, although its one limitation is that nearly all of the assets are based on existing characters, so every part of your avatar steals a little from everyone else. This offers a silver lining though as you can basically recreate any existing character and alter their physique, gender, attire, etc. to whatever your fanfic-ridden mind desires. 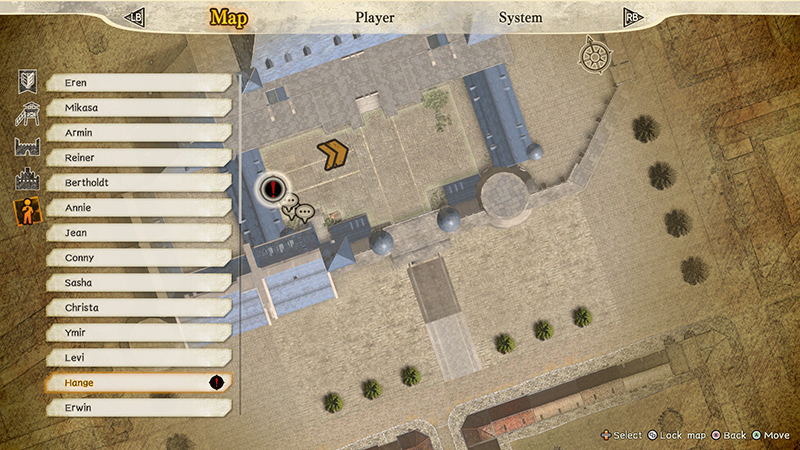 The campaign borrows a lot from other recent Warriors games as time spent between the core action gameplay is dedicated to improving your equipment, building up relationship meters with nearly every character in the series, and taking on additional missions to grind resources and level up. While this definitely was done to pad out the game’s length, the upgrades to your gear and stats are tangible and it’s certainly an improvement to the last game’s rather short story mode. Now encompassing both seasons of the anime, the game has a healthy number of scenarios and locales to conquer. However, following the source material’s order of events to a “T”, the first third of the game is a little front loaded with dire encounter-after-encounter in the city before it really opens up. If you played the first game as well, it will really feel like you’re going through the motions until you start getting teaming up with the special recon units or move across the open fields outside the walls.

You still can play as any of the previous game’s characters in the Free and online modes. You also get access to play as various key titans that, while slow and cumbersome, offer a power fantasy of their own as they obliterate the giant mooks. Having prioritized your nameless protagonist however, they’re more of an afterthought to use. 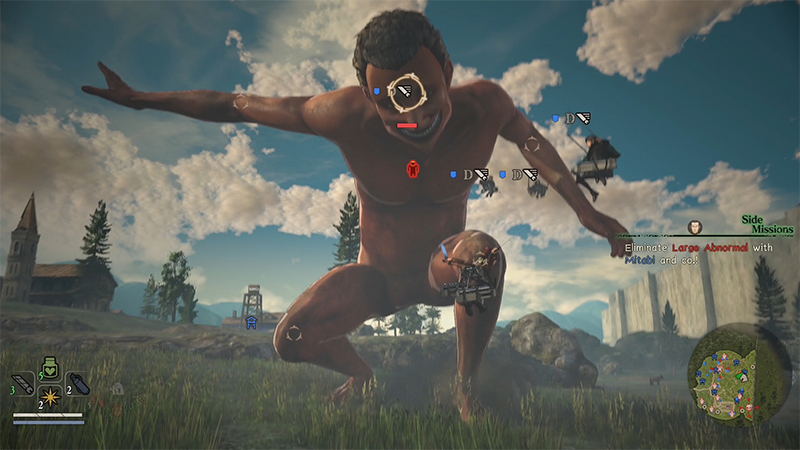 Core movement is still as good as ever as you use your ODM gear to launch yourself around the world like Spider-Man. The combat system still takes a little bit to get used to, especially with all the second-to-second preplanning to land just one swing on a titan’s neck or limbs. Mastering this mechanic though makes you look like a pro and it will eventually become second nature. The emphasis on replacing your canisters and fuel (and subsequently running completely out) has been lessened. Instead, a priority towards using team abilities and finishers plays a much larger role making the player character’s gameplay style closer to that of Armin from the first game. Special named allies also provide unique abilities such as targeting just limbs for massive damage or giving you a free flash grenade. This small twist adds an element of strategy as you’ll have to pick and choose which characters to bring with you, although it matters little in the core story where you’re stuck with whomever is supposed to be there. 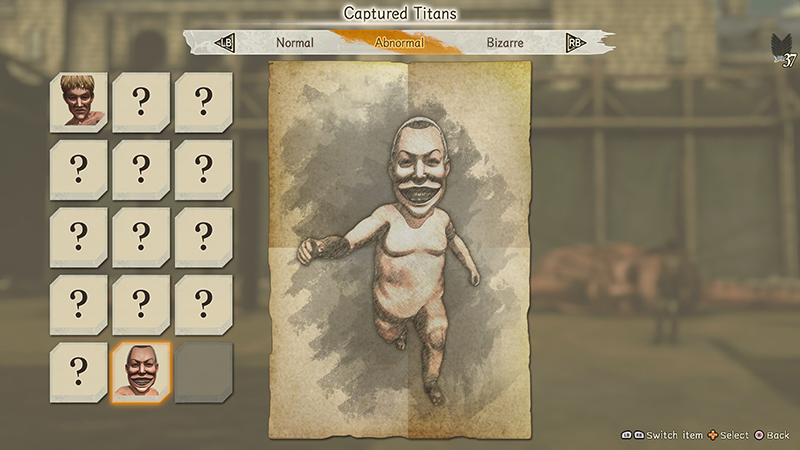 Enemy titans will also enter an aggressive mode where they will soley go after you and easily take you out if you aren’t prepared with one of your escape resources or a distraction. This rebalance lends to making your character much  less godlike but the game’s less-than-subtle message about working as a team ties itself into the gameplay this way, and it’s certainly an improvement over the frustration of being low on resources. Timing is now more important as you get access to powerful “sniping” attacks when a titan isn’t aware of your presence and these require a little more quick reaction than regular swings. Escaping a attack will also put you into a QTE counterattack that not only looks cool but allows you to deal significant damage. Still returning from the last game though are very HP-heavy enemies which take forever to eliminate and thus lead to more situations where it looks goofy to wail on them. A strange new feature is the ability to capture titans for bonuses and this even adds on a Pokemon-like collection element to the game should you choose to engage with it. 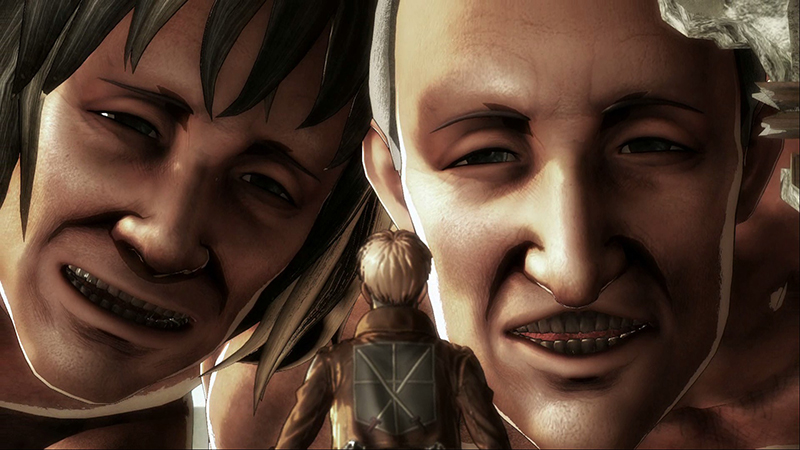 The visuals are as good as expected and it runs great on PC. Something changed between this game and the last however as dynamic kill animations sometimes present themselves at weird camera angles and break the immersion a little as your character will literally slide through a titan’s mesh or the view will swing you 180 degrees in the opposite direction. Since they don’t have access to the OST from the anime, the music is a pale imitation of the source material. While it does its job at emulating both the Shonen action and off-putting horror of the show, none of it is necessarily memorable.

Attack on Titan 2 is a safe upgrade that renders its previous entry inessential, but it seems like just a matter of time until an Attack on Titan 3 does the same to this. Still, the improvements within make this a worthwhile romp that will deliver a meaty chunk of gameplay to grind although laymen won’t parse much of a difference nor see the reason to spend another $60 for non-canon material. But the much requested custom character feature adds a fresh viewpoint (literally) to the campaign for those that need some (virtual) personal stake in the fate of humanity. And even if you aren’t acquainted with the source material, the game is happy to swallow you in.

A review copy of the game was provided by the publisher for Playstation 4. The game is also available on the Xbox One, Switch, and PC.