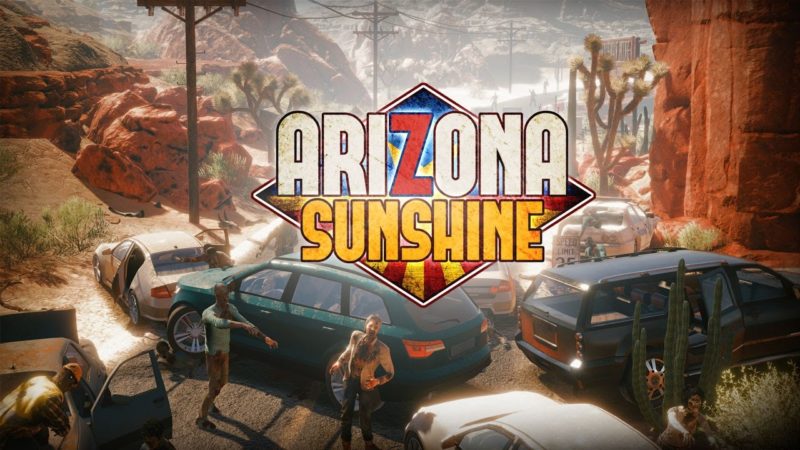 I’m not in any way sick of zombies.

I know that a lot of people feel fatigued by this particular subgenre of horror, but I honestly can’t get enough of zombie films and games. As such, I had been looking forward to Arizona Sunshine, a VR zombie shooter set in the bright and colorful Arizona desert. I’ve played a couple of zombie-shooting VR games, from Until Dawn: Rush of Blood to The Brookhaven Experiment, but Arizona Sunshine promises freedom of movement, which was something the aforementioned titles don’t have. Unlike a lot of the PSVR games I’ve played, it offers a variety of ways to play, from using a combination of free movement and VR aiming with a regular DualShock 4 controller or the new PSVR Aim controller, to the use of dual Move controllers that allow you to teleport around the map freely. I opted for the Move controllers, as it’s the recommended way to play.

Right off the bat, I was taken aback by how poor the visuals have translated from PC to PlayStation 4. While the game was gorgeous on PC, I knew that it would probably take something of a hit for this port. Unfortunately, it’s so much worse. Lighting is nonexistent, textures are muddy, big signs were certainly supposed to be legible are painfully blurry, and the zombies all look half formed and dull. Worst of all is the draw distance. For a game sold largely with its wide open environments, big, blue sky, and enormous orange mountains, the draw distance is barely 15 feet, covering the world in a Silent Hill-esque fog. It’s jarring considering how often the player character comments on being outside, and the beautiful open air and sky. This kills immersion dead, which for a VR game is pretty significant. At least it didn’t make me sick at any point, but it’s just so weird to play a game this muddy. It honestly feels at times like the game was ported by way of simply sliding all of the graphical settings down as low as they would go, and then releasing it. I know that not everything can command the same level of visual prowess that Arkham VR, Resident Evil 7, and Rush of Blood did, but c’mon man. 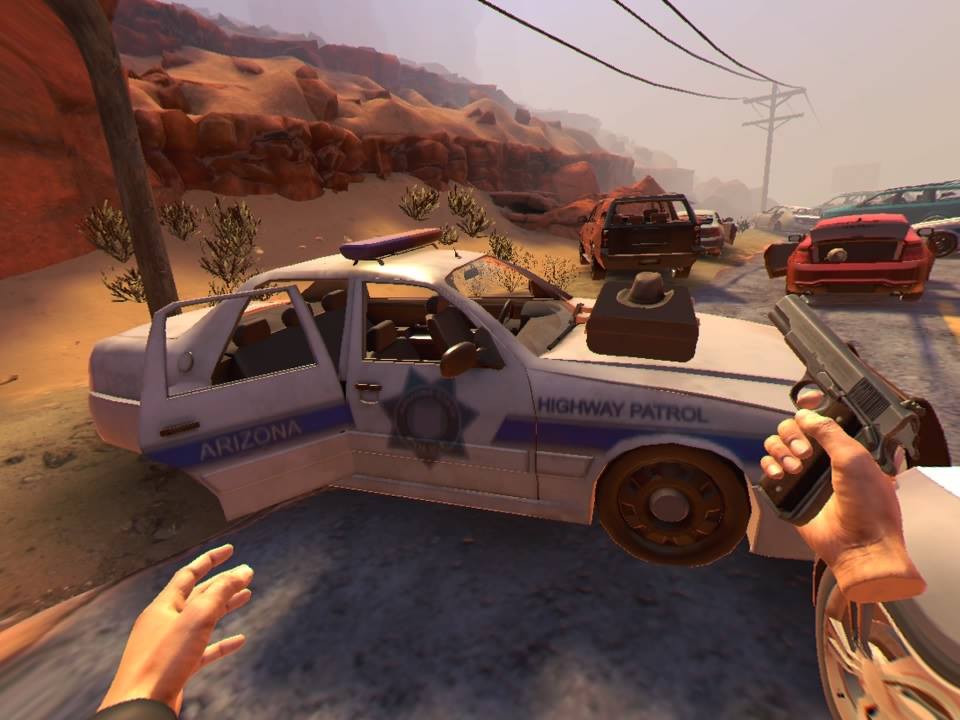 It is worth pointing out that the game is recommended for play on PS4 Pro. I don’t have one of those, and I haven’t been able to find a direct comparison to see what the difference is with this game running on both platforms. I can only speak for the way the game looks on a standard PlayStation 4, which is… not great. The few videos I’ve found of what it looks like running on a Pro are slightly better (arguably a longer draw distance, although the fog still seems to be a major wall between player and immersion, and textures look a little better), but for the majority on PS4, the visuals are hardly passable.

Another major issue is the controls. I chose to play with dual Move controllers, as that’s what the game recommended to me and what felt like the most natural way to play. While I won’t say the controls are completely broken, they are very difficult to work with and often don’t make sense or function properly due to odd design choices. Aiming down the sights of a gun seems to be way less effective than simply hip firing and following where the trace bullet lands as a point of reference for where you’re aiming. Tossing grenades is incredibly inaccurate and can often lead to them simply falling straight from your hand to ground in front of you. The most frustratingly difficult thing is trying to operate doors, which require a forward pushing movement but will often stop dead when you let go of the button, causing it only to open a crack.

The inventory has similar odd design choices making it difficult to work with. Intended as a sort of “utility belt” that floats below the player’s vision, the inventory offers a quick way to switch out weapons, grenades; bringing an empty weapon to your chest from the inventory will reload it. This would work fine for the most part (Arkham VR has a nearly identical idea), but for some reason the inventory is split to multiple heights, with some parts of it on top, and others on the bottom, which results in never really being able to grab what you need exactly in a moment of panic (which often happens, as acquiring most story items will alert a horde of zombies to your location). This leads to frustrating deaths amidst fighting with your inventory rather than the zombies swarms surrounding you. 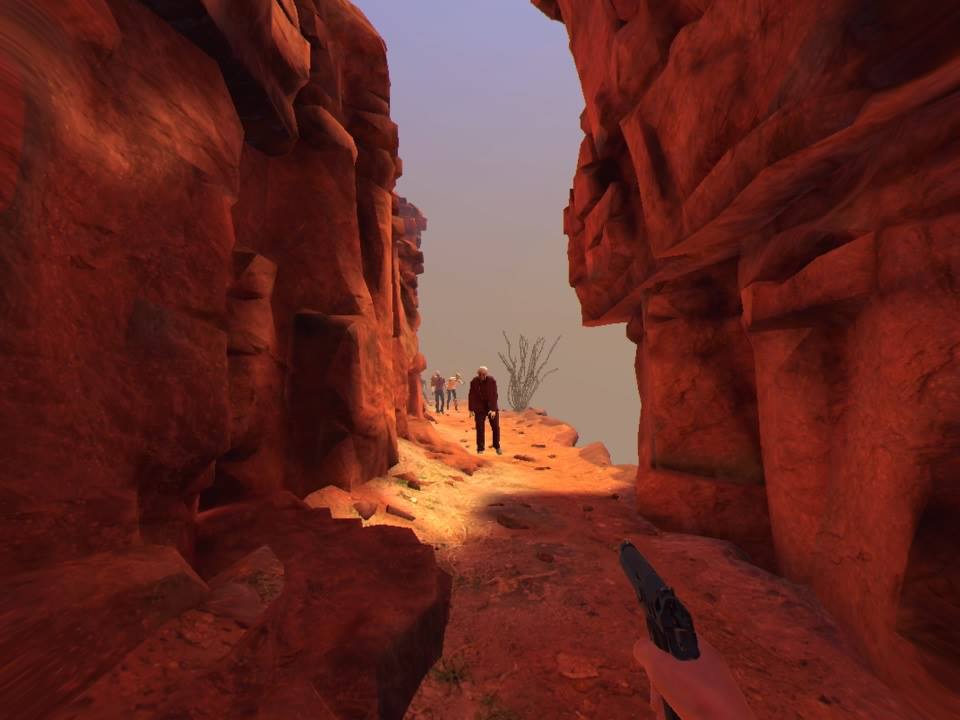 Outside of control and visual issues, there’s also a handful of pesky audio issues: most notably the main character’s “inner thoughts” voice is too loud, and of an entirely different sound quality than the rest of the game’s audio. This isn’t too distracting, but it’s worth mentioning.

Arizona Sunshine’s main story is light, following an unnamed protagonist as he tries to find safety in the post zombie apocalypse. It doesn’t take itself that seriously, with the player character making quippy lines and mocking ‘Fred’ (the nickname he’s given the infected as a whole). He can sometimes overplay this, but usually, it’s fine. While I’m generally (and increasingly) fatigued by zombie media set almost exclusively in the south west, the world around you (what you can see at least) is well designed. The water especially is wonderfully refreshing looking, it makes me thirsty just glancing at it.

There is a lot of fun to be had capping zombies and playing around with the toy box of various scraps you can find in the world – from wearable hats and masks, to cans, bottles, light fixtures, and more – which can be tossed at zombies. Thrown items don’t deal any damage, though, which brings me to complain about the inability to melee incoming zombies. There’s a wide variety of deadly looking tools lying around that you can pick up and swing, but these items harmlessly through the undead while you’re still holding them and bounce off like soccer balls when thrown. Why in the world these items exist is beyond me. It’s so tempting to want to dual-wield a gun and a shovel while fighting, especially seeing as close-quarters combat will often become a necessity. 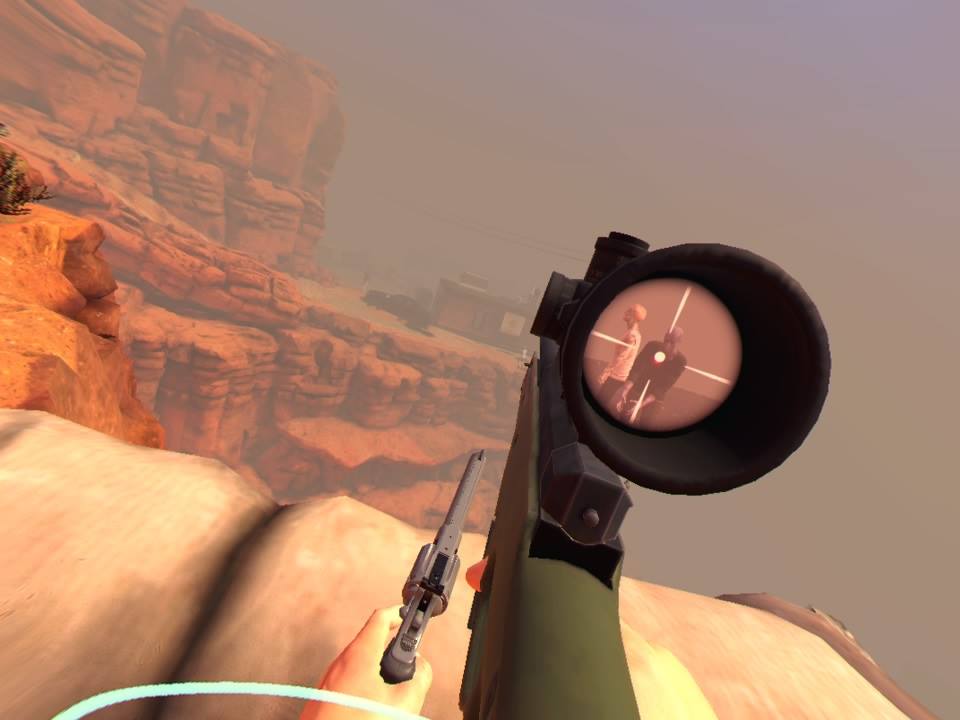 Among all of the issues and odd design decisions, the one thing I did truly enjoy were the handful of mounted sniper sections. Throughout the game, you can find scoped sniper rifles that can be used to pick off small crowds from above. It’s the most fun I had with the game; holding the sniper with both hands was both intuitive and immersive feeling, requiring the player to actually bring the eyepiece up to their eye rather than simply snapping our perspective down the sights. Honestly, I think I’d play a whole game centered around VR sniping, and I wish the rifle was something we could take with us, rather than it being locked to special sections.

Arizona Sunshine is often at its best when it’s most relaxed, allowing the player to have fun with the zombies and the environment, feeling almost like an interactive Shaun of the Dead experience. Playing with a partner in co-op is ideal for this, as the two of you can create whole games out of torturing the poor zombie stragglers. This is truly an experience impossible to have outside of VR due to the very nature of the way you interact with the world. Playing casually is when the game surprisingly starts to become fun, because whenever the living dead start overrun you, the game’s weaknesses surrounding its controls and poor visuals become increasingly apparent. Complications are most noticeable in the game’s cooperative horde mode which requires teamwork against hordes of incoming undead. Playing this mode becomes incredibly taxing and unfair due to the control problems, never allowing you to be a competent partner.

Overall, if the technical problems get ironed out, Arizona Sunshine could be a fun, if incredibly budget-looking title for PSVR. What fun I was able to glean from it was in spite of control problems, and often only occurred when I was dicking around rather than focusing on the combat or when trying to feel immersed within the heavily-downsized and foggy world. As it stands, the two biggest selling points in a VR game are being able to observe and interact with the world intuitively. This game has problems accomplishing both.

PS4 review code was provided by the publisher.