Review: Amnesia: A Machine For Pigs - Rely on Horror

Review: Amnesia: A Machine For Pigs 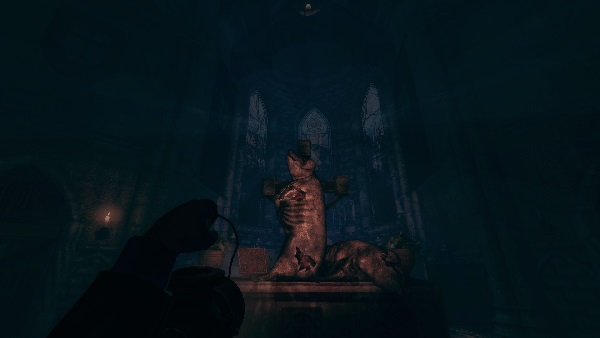 In only few short years, the Amnesia franchise has ascended to legendary status within the horror genre. The first game Amnesia: The Dark Descent was hailed by players and critics alike as the savior of survival horror. It renewed interest in the genre for gamers that had long since moved on from the Silent Hills and Resident Evils of the world. Frictional Games crafted an experience that was so unnerving that most people thought twice about actually starting the game up. It’s a tough act to follow but thechineseroom, the developers behind the cult hit Dear Esther are at the reigns of the franchise now with Amnesia: A Machine For Pigs, and they’ve made it fit only for the slaughtering of pigs.

While The Dark Descent most certainly had a storyline, it wasn’t nearly as integral to the experience as it is here in Machine For Pigs. It should be noted though that if you have not played the first Amnesia, you need not worry because while the two games share some connections, the storylines are independent from one another. Even how much of the narrative is conveyed to the player is done in a far different manner. thechineseroom has employed many of the environmental storyline techniques they used in Dear Esther once again, which is both an improvement and a hindrance on the franchise. (I’ll get into why it’s both later)

It’s impossible to actually go into the story of A Machine For Pigs without potentially harming the experience. For the sake of everyone reading this I’ll only touch on the plot slightly so you get a bit of an idea of what the tale is actually about. The game takes place on the eve of the 20th century in 1899. In the game you play as Oswald Mandus, a wealthy industrialist who awakens in the dead of night with most of his memory a blur. The only things he can clearly remember are his two sons Edwin and Enoch, both of which are noticeably absent from his side.  Your quest from there on out is to delve into the deepest depths of your surroundings, confronting a monolithic machine and finding Oswald’s sons. 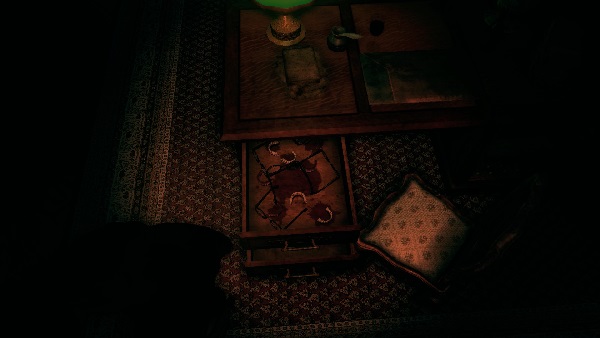 As I already stated, there’s a far greater emphasis on story this time around. Most of the enjoyment you derive from the experience will come from uprooting the seeds of this mystery. The story demands your full attention and you really need to take the time to read every note, examine the environments, and take it all in to truly appreciate the tale being told here. It can be as touching of a game as it can be harrowing at times.

Now while the story of A Machine For Pigs may be quite well done, the overall experience is quite a step down from the previous game. The story was put before everything in this game and it really shows. For instance while The Dark Descent was a superb survival horror game, I’d hesitate to place A Machine For Pigs in the same genre. Almost all of the survival elements have been removed. There’s no longer any item management or resource gathering as you have no inventory whatsoever. Lantern oil for example, the most sought after commodity in the first game isn’t in A Machine For Pigs at all. Your lantern’s light will shine brightly throughout the whole game without any need of being refilled. Couple this with the fact that all of the sanity effects from the first game are also removed, and it can make for what often becomes a boring waltz from point a to point b. The first game literally made you afraid of the dark, not of what was in it per-se, but the darkness itself. Your sanity meter would drain in the darkness and the only way to keep it from draining completely was to stay in the light. To light the way with your lantern, which became a limited resource itself that you sought after. I had never realized how much I’d appreciated those aspects of the The Dark Descent till they were removed in A Machine For Pigs. 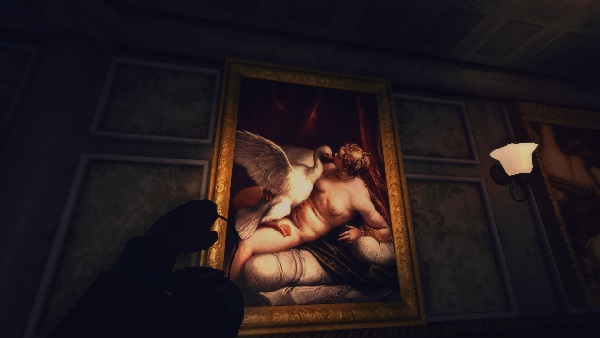 In the initial hour of A Machine For Pigs, the game displays a lot of promise with regards to how it encourages players to really explore the environments. In the beginning the developers toy with your emotions by doing things like allowing you to interact with a mounted gun on a wall. Your heart skips a beat with joy as the mouse cursor indicates you can touch it, tricking you into thinking you are just about to get locked and loaded and unleash hell on the beasts within the game. Only you immediately find that the gun only acts as a lever to open a passage to a dark crypt. It’s a brilliant way of toying with the player’s emotions, as the developers knew most players will look at a gun within the game and pray to god they can actually use it. There’s a few things like this early on, but after the first hour they disappear entirely, the environments only become less and less interesting as time goes on. The levels are also bone crushingly linear, and it’s often not dissimilar to a lot of “AAA” games that force you down a straight path. Now one should expect a horror game to be linear, but there should also be room for exploration. You know, like the first game.

The puzzles within the game vary in terms with how engaging they are. A few puzzles made me smile with how carefully the developers subtly give you hints as to how to solve it. One had me find a corrosive material that reacts to light, then I found a light source,  and finally a rusty lock is all that barred me from the next area–you get where this is going. All the elements are there, you’ve got to piece it together yourself though. However much like the level design, puzzles quickly become dull. Most of them aren’t even puzzles so much as “go stick that battery in the machine a couple feet away from it”.

One of the more impressive elements of the game is the sound design and music. Wood, stone, marble, and steel surfaces react appropriately to the soles of your shoes. Whisks of wind in a dark environment may be just enough to set you on edge when accompanied with the musical score. A true testament to the sound though is when the enemies within the game let out a high pitched squeal to signal that they’ve spotted you. There are few things in gaming that’ll make your hairs stand on end like what’s done here. All of the sound design comes together wonderfully in this game. 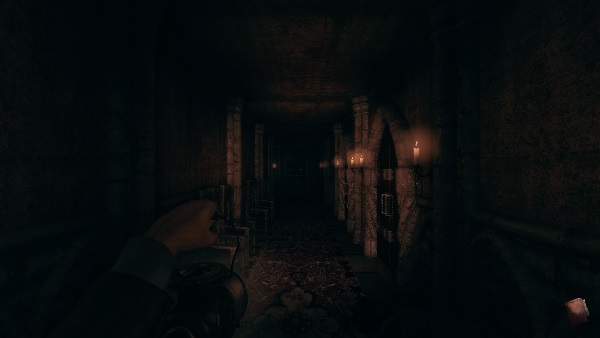 Sadly the same cannot be said for the enemies themselves. The actual appearance of your foes is very creative, and even disturbing when given context. However the interaction with them falls completely flat. Basically they react to your Lantern and will chase you if they see you, not unlike the enemies from the first game. However unlike the first game where you were often placed in unique scenarios, like being trapped in an environment–you’re only reminded of how terribly linear A Machine For Pigs is. Chases literally just become you running forward past your assailants towards the door. It becomes boring, and this is even despite the actual enemy encounters being extremely rare.

The visuals themselves are a mixed bag, there are instances of the game where the art direction really shines. Many of the Victorian age paintings look fantastic, but you see the same one’s throughout the game over and over again. On a technical level there’s not much to report either, it’s about on par with the first game. It looks great at times, particularly the lighting, but it’s not going to make your PC sweat anytime soon.

A Machine For Pigs, the follow up to one of the scariest games does the unthinkable in that it is rarely frightening. It certainly has its moments, but it’s far too reliant on old horror tropes like hearing children laughing in the dark, or seeing a shadowy figure pass by a doorway you’re about to enter. Predictability is the enemy of any horror experience, and that’s what the game becomes. There’s no survival elements because the item management and sanity elements have been removed, and there’s no tension from chases due to the linearity and simplicity of the level design. All of the negative elements come together in a survival horror game that becomes utterly boring despite only being 5 or so hours long. 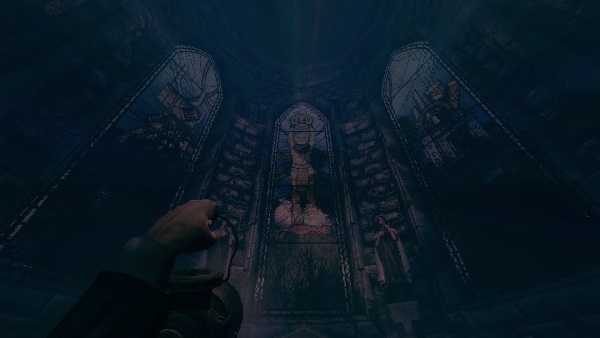 thechineseroom had a tough job following up Frictional Games’ horror masterpiece. Honestly, they should be commended for not trying to repeat what was great about The Dark Descent. As they should be commended for wanting to tell a gripping story. However there’s still a horror legacy to be upheld with this series, and unfortunately the experimentation brings about some unpleasant results. Amnesia: A Machine For Pigs is one of those instances where the creator had only the best of intentions, but the grand ambitions just yielded a bloody mess.