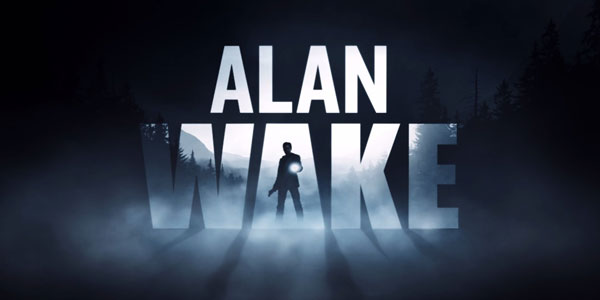 Back in 2010, I had a difficult time figuring out whether I loved or hated Alan Wake.  On one hand, I loved it for its unique take on the survival horror genre.  On the other, I hated it for all the (what I felt were) cheap story tactics the game employed.   I loved the emphasis on storytelling, but hated the fact that Alan was such an unlikeable protagonist.

However, after having played through the main game a few times and then the DLC episodes, I’ve grown to really enjoy it.  When Remedy announced that it was releasing the PC version, my eyes lit up.  I’d wanted to originally play the game on PC, but for a variety of reasons, that…wasn’t happening.  However, Remedy announcing that they’d procured the publishing rights to their game, it was almost like finding out that Santa Claus was real all along.

Despite all of my excitement, I harboured a lingering doubt.  I’d already played the game several times.  Would Alan Wake’s arrival on the PC have been worth the wait?

It should be noted that the game itself is essentially the same.  There aren’t any new levels or modes to play through.  Same gameplay, same settings, same characters same cinematics.  Just in case you were thinking that this was something different…it’s not.

Many reviewers and even Remedy themselves have touted the game’s revamped visuals.  This really can’t be overstated – the game looks AMAZING!  If you thought it looked great in 2010, prepare to have your mind blown.  All of the little details that were in the game before yet went unnoticed shined through perfectly on PC.The pattern on Alan’s jacket, facial expressions, the ‘misty’ nature of The Dark Presence – hell, even the product placement all show up in beautiful, vivid detail.  With AMD Eyefinity 3D support and NVIDIA NVISION 3D Stereoscopic support, the revamped visuals are really a sight to behold.  There are some flickering and other graphical hiccups, but Remedy is aware of them and are working on fixes as of the time of writing. 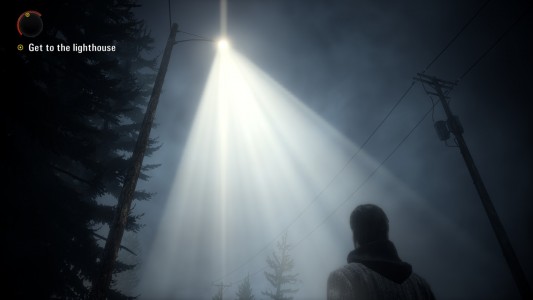 Don't look directly into the light

I thought that I had found everything there was to find in this game.  Looking at the PC version, I can already tell that I was wrong.  The updated visuals now let all of the little details you might have missed before shine through.  For instance, in the original game, there were MS Tag images scattered throughout the levels.  The PC version has replaced them with QR codes that reveal different things.  Honestly, I hadn’t even noticed them in the 360 version.  I thought they might have been pictures.  Probably because I didn’t know what the hell an MS tag was.  But I certainly know what the ubiquitous QR code is, so when I saw it, I grabbed my Android phone and used QR Droid to scan the image.  The first one I found sent me to the Alan Wake Facebook page – the second one I came across was a secret message “Huh.  Turns out this isn’t too bad, even if you’re not sitting on a couch when you play it.  Who knew!”  Cheeky stuff. 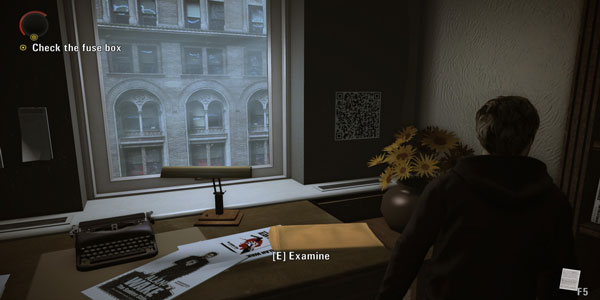 "I'll get the flashlight in a minute, Honey! I...just have to find out what this says!"

The visuals aren’t the only thing that’s had work done.  Some people will find that using a controller gives them the advantage while others will prefer the highly customizable keyboard-mouse configuration.  I had thought that using a keyboard and mouse would be difficult when playing a game that I primarily played with a controller before.  However, after a little bit of a learning curve, I was back to blasting through Taken with ease.  There’s no auto-aim, but aiming with the mouse is incredibly precise.

Really the only issue there is with the controls is that currently (as of the time of writing) you cannot assign commands to the mouse.  For instance, if your mouse has thumb buttons – they go unused.  It would be more than an issue, but a fix is pending.  Got to give Remedy credit where it’s due – they’ve been very timely with fixing issues that have come up with the game.

It had bothered me that the proper ending to Alan Wake existed in paid-DLC.  EA is getting their asses handed to them by the gaming community for charging for story bits of Mass Effect 3 as DLC, so I’m kind of getting the feeling that I’m not the only one that feels that it was a pretty cheap thing to do.  Well the PC version of Alan Wake remedies this by featuring both The Signal and The Writer DLC episodes.  So you can play from beginning to end without having to shell out additional cash.

So to answer my original question – after such a long delay, has Alan Wake for PC been worth the wait?   In a word, yes.  Absolutely.  There are a few issues with the game, but fixes are being worked on.  If your PC has the guts to run it, Alan Wake for PC is the definitive experience – the way the game was meant to be played.  The game is currently available for digital download on Steam, with physical copies being available shortly.