reHorror: Nemesis finally gets his S.T.A.R.S.

What do you do when you’ve given birth to a property that’s grown to become one of gaming’s most recognized and beloved? Well, you expose its characters and storylines as best you can, of course, with expansion being the most important goal in mind. Capcom has done just that with the Resident Evil franchise, whose characters have transcended into films and even an entirely different genre altogether. Today we’ll be focusing on the latter, and rightfully so because Capcom’s just released Ultimate Marvel vs. Capcom 3.  Oh, and it finally sees Nemesis’ life-long mission come to a satisfying (for him, at least) conclusion. Good things do come to those that wait… 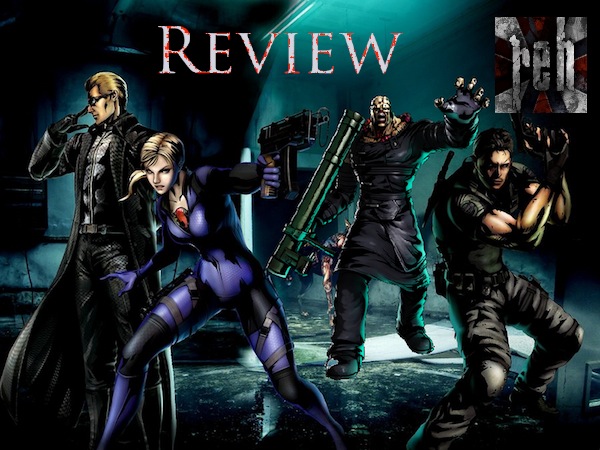 Less than a year ago, Capcom released Marvel vs. Capcom 3 to the masses. It was met with much success and thus has led to this year’s update of said fighter. Everything you know and love about last year’s game is still here, albeit tweaked here and there, with a slew of new additions, of course. Some of the characters have been given updates in order to make them up to par with other, more stronger selections, to make things a little more balanced (Captain America is a beast!). While small updates like being able to mash buttons while performing some hyper combos and being able to perform X-Factor while airborne (a last resort move that now lasts a shorter amount of time) also breathe some new life to the already-established formula, though it may go unnoticed by casual players. The biggest additions are, of course, the new characters, of which there are a dozen added to the game’s already beefy cast (which is still a tad shorter than its predecessor).

Since I am diving into this review with my Resident Evil goggles on, the one new addition to the game’s roster of beloved Capcom and Marvel characters I’m going to be focusing on the most is none other than Nemmy himself. Nemesis looks like he’s lost some weight with his fighting game debut. I mean, it wouldn’t be absurd to suspect that he has been hitting the gym post-Resident Evil 3. Hell, the man may be a bit slimmer than before, but he towers over any other entry in the game’s roster, except Galactus, of course (yes, he’s playable in his own dedicated mode now). And as you might imagine, Nemmy is quite slow. But like any slow-moving tank coming at you, fear and panic will definitely be flowing through your veins. So, he may be slow, but he still has one hell of a move-set at his disposal for hardcore Resident Evil fans to master.

First let me openly state that I’m nowhere near the skill levels presented by even the most green tournament players out there. Far from it. I don’t completely suck though (OK, maybe I do…). But hey, I had a blast taking Nemesis out for a spin and he complemented my mainstay duo of Chris and Wesker quite nicely. So, yeah, I’m quite grateful for the game’s Mission Mode. Said mode gives players a chance to truly learn some useful combos with their favorite characters. Yeah, you still have your standard Training Mode in which you can customize certain attributes to your liking, but Mission Mode is where it’s at if you’re really serious about learning how to chain together various moves to be even more effective when engaging in online play. So, I did just that for Nemesis. 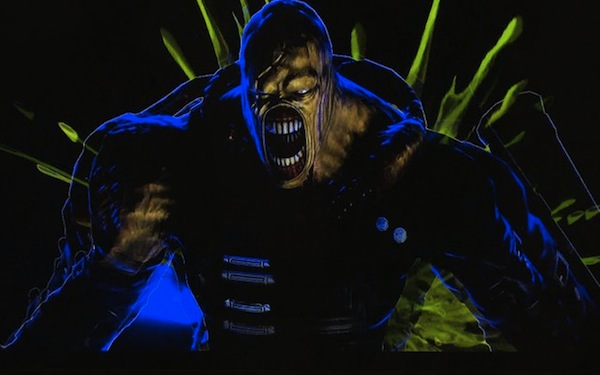 As aforementioned, Nemmy is quite slow, so double-tapping the left or right directional button is definitely something you’ll find yourself doing a lot to get up close and personal with your opponent. But don’t fret, Nemmy also has a solid repertoire of long-range attacks, with some even varying by angle. As expected, you’re able to utilize Nemmy’s iconic rocket launcher, with one of his moves involving a clothesline maneuver followed by a rocket shot. You can also opt to simply stand idle and unload rockets at your opponent, but even for a minimally skilled player like me, that’s not very fun and I would rather get in close to try my best to pull off some decent combos.

Other attacks Nemmy could perform involve the tentacles that burst out of his hands and body. Whip-like in nature, one move has you grabbing hold of your opponent, followed by a slam to the ground. This can also be pulled off when an opponent is jumping at you at an angle. There’s also some other neat special moves Nemmy has, but I’ll leave those to your own discovery. What I do want to make note of are Nemmy’s hyper combos.

You’ve probably already seen Nemmy’s final hyper combo, where he mutates into his final, tentacled, blob-like form from Resident Evil 3. It’s a gruesome and downright awesome transformation, resulting in one of my favorite hyper combos in the game. Oh, just make sure you’re close to your opponent when you’re performing it, if not then…well, you just wasted a hyper combo…Another of Nemmy’s hyper combos has him unleashing rockets at his opponent, concluding with a fierce body slam. In the end, Nemmy is quite a solid addition to the game’s roster of well-known characters. And really, it’s about time we get to play as a BOW in Capcom’s all-star fighting game series. William DLC anyone? 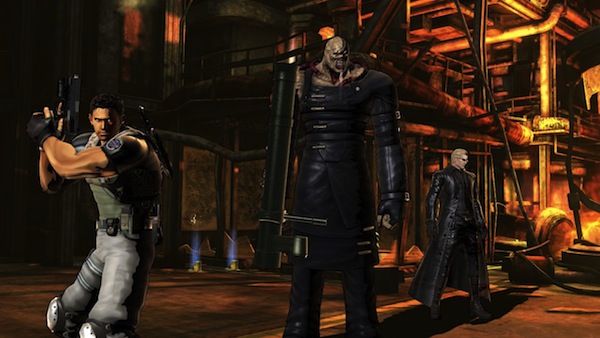 After familiarizing myself with Nemmy and his distinct moves via Training Mode and Mission Mode, I took it to the game’s other traditional single player offering: Arcade Mode. Of course, I had an all-STAR team comprised of Nemmy, Chris and Wesker (who would sometimes be replaced by Jill). Hell, if you’re feeling creative then you could even have a true “Raccoon” City team by swapping out someone with another one of the Ultimate version’s new characters, Rocket Raccoon. I won’t spoil any endings, but Nemmy’s is quite cool, and we even get to see one of the classic villains in the series rear his crusty head once more. Oh, and it’s extremely satisfying to save the Earth by using Nemmy to deliver the final blows to Galactus.

Of course, the majority of players’ time with the game will be spent with the robust online mode that has also received some enhancements and additions. The most notable, and demanded, one being the Spectator Mode, in which you’re no longer made to stare at diminishing health bars while you wait for your turn to fight. This Ultimate version also brings forth enhancements to the online mode’s matchmaking, as it’s now easier to find matches without having to resort to the single players Fight Request option exclusively to find a quick bout (though this still proves to be the fastest way to connect with other players online, at least for me). You can also opt to challenge a buddy in local multiplayer as well, which always proves to be a good ol’ time, especially now with the new maps (with one new Resident Evil one) and characters this Ultimate version introduces.

As of the time of this writing I’ve yet to try out the game’s upcoming Heroes and Heralds Mode, because…well…it’s not out yet. Said mode will be a DLC add-on that should be heading our way soon. So, what’s so significant about this particular mode? Well, it’s basically comprised of a multitude of cards, each representing a certain character and each housing its own set of special attributes. Two of these cards happen to be HUNK and Leon. But wait! Don’t get too excited just yet. I did say they were cards, and they’re just that. You’ll be able to use the HUNK and Leon card and tag one of them to your desired fighter to see the enhancements it bestows upon you. So, yeah, no playable Leon or HUNK (yet).

Ultimate Marvel vs. Capcom 3 is a worthy upgrade to last year’s all-star fighting game, pitting the best of Capcom’s family of titles against Marvel’s heroes and villains. For $39.99 you get 12 new characters, a good selection of new stages, a much demanded addition to the online package with spectator mode, and an overall enhancement to some of the mechanics of the base game (though, as aforementioned, this may only be noticed by the hardcore fan-base). It’s definitely worth it.

Yeah, I prefer Street Fighter IV’s overall mechanics over Marvel vs. Capcom 3’s, but that doesn’t make the experience any less fun than it is. Street Fighter’s not as rapid and a bit more strategic, whereas Marvel vs. Capcom provides a wholly satisfying and over-the-top experience in and of itself, that still manages to be ultra-tournamet-friendly. Thus, Ultimate Marvel vs. Capcom 3 is the definitive version of the game you’ve probably already spent dozens, if not hundreds, of hours playing, whether that be online or off. This is truly a game that should be in any fighting game fan’s collection. And, come on, what other fighting game can be known for housing a quartet of iconic Resident Evil characters (now including Nemesis)?

Yes, after many long years, Nemesis finally gets the girl…if you decide to team him up with Jill that is.