Night Trap is one of the most iconic games in gaming history. Not because of revolutionary game mechanics, or the cheesy FMV’s, but because of the controversy surrounding this game at the time of its original release. Alongside Mortal Kombat, the United States Senate committee scrutinized Night Trap for its violent live-action scenes. Even though the developers actively avoided any blood and gore, Night Trap became an example of how video games are corrupting our youth through violence. The conclusion of the committee led to the creation of the Entertainment Software Ratings Board (ESRB) and Night Trap’s removal from store shelves for a period of time, but not before a giant spike in sales.

Twenty-five years later, titles such as Grand Theft Auto, DOOM, and Call of Duty make Night Trap look like My Little Pony in comparison. But the game is still beloved and a collector’s item to this very day. Now developer and publisher Screaming Villains have re-released Night Trap for PlayStation 4 and PC. Taking the controversy and status of Night Trap out of the equation, does the game hold up after 25 years, or did past controversy inflate the game’s clout? Let’s find out. 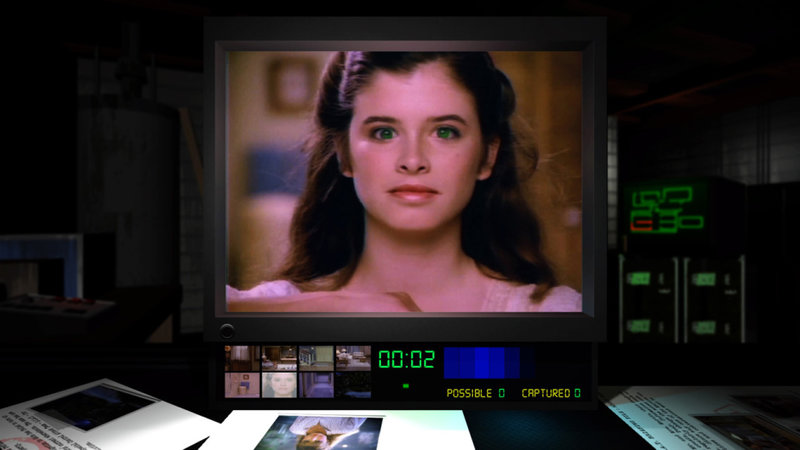 In Night Trap, you take control of a special agent in the Sega Control Attack Team (S.C.A.T), tasked with monitoring a group of teenagers visiting the Martin winery estate. Unbeknownst to the teenagers, the house is full of blood-sucking creatures known as Augers, and they are hungry. But luckily for them, you are watching over the situation on eight monitors linked to cameras strewn throughout the house. Also in your control are traps that you can trigger whenever an Auger is in the vicinity. Disposing of the Augers and keeping the teenager’s safe are your top priorities. While doing this, you must keep an ear out for when the owners of the house change the security access color code. When the security code changes, you won’t be able to trigger the traps unless set to the corresponding color. If you’ve played Five Nights at Freddy’s, you will easily recognize the mechanics of this game.

The entire game is an interactive movie brought to you in glorious FMV, with all the bad acting and cheap sets that you would expect. This isn’t a bad thing either. The FMVs make the game feel like it’s part of a time-capsule from the eighties. Think a family sitcom but with oddly dressed vampires wielding giant sticks and you’ll get the picture. Watching the group of teenagers perform the Night Trap theme song while singing into a tennis racket is so cheesy that you could put it on your nachos. It’s this type of thing that makes the overall story awkwardly charming.

A rather fun feature of Night Trap is that multiple story scenes occur at the same time. While the owners of the house are discussing their evil plans, the teenagers pull up in their car. You may decide to watch one scene to its completion but miss another. Alternatively, you may jump between them and only get snippets of dialogue. The full plot of Night Trap is split among these video feeds, concurrently moving forward whether you’re paying attention or not. Finding out a secret about the goings on in the house is enjoyable and encourages multiple playthroughs. If you enjoy bad movies ironically, then Night Trap‘s FMVs provide a lot of enjoyment. 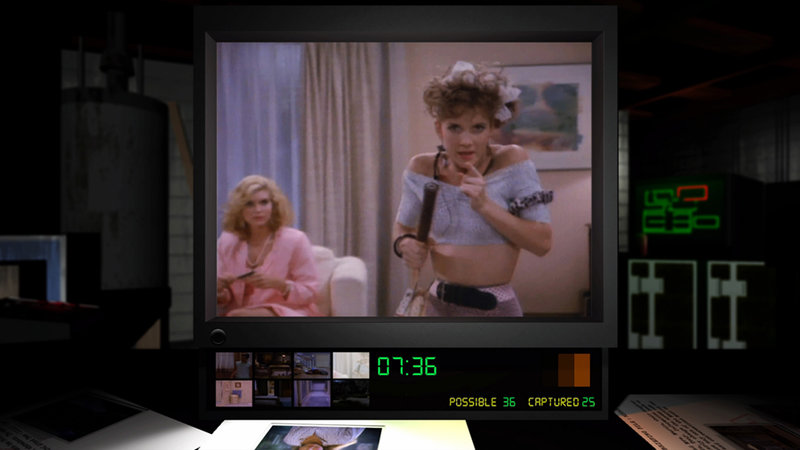 Control over the FMVs in Night Trap is very limited. The only times you interact with the movie is when changing cameras or trapping an Auger. If you see an Auger creeping around, or sneaking up on an unsuspecting teenager, you need to set off a trap and capture them before it is too late. These mechanics are what make up the entirety of your time with Night Trap. It is not like games such as Until Dawn or Heavy Rain where you make decisions that affect the characters. You are simply an observer.

The gameplay isn’t exactly fun or engaging. A lot of your time will consist of flicking through your monitors while waiting for something to happen. Trapping the Augers requires little skill and instead, is about timing. But, this can be easily avoided. Every time I stumbled across an Auger sneaking through the house, I spammed the trap button until a trap triggered. There is no punishment for doing this and ruined my enjoyment of the game. Trapping Augers starts as an intense task based on your reaction time, and then devolves into spamming buttons until the traps trigger. I felt no satisfaction in trapping the Augers because the game offers no real challenge. 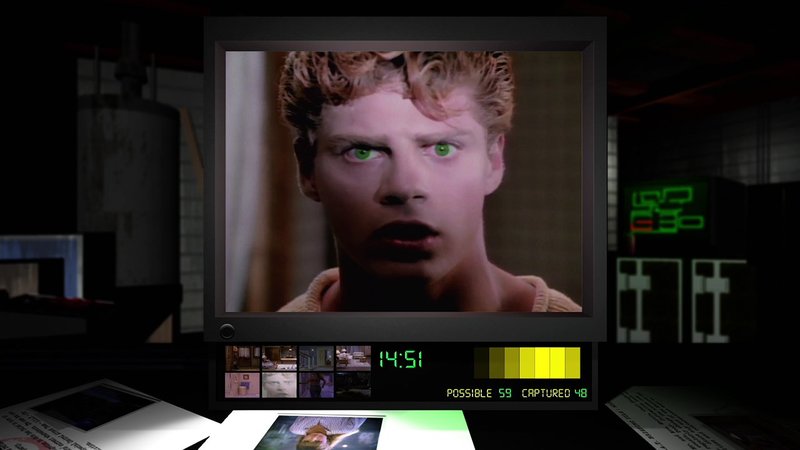 One of the biggest problems with Night Trap is how much trial and error is involved. The game is only about an hour long, but it will take you longer than that to actually finish it. This is due to how often you will get a game over. It is not due to any lack of skill from the player, but familiarity of key events. Not knowing when security changes occur, or when Augers appear, will lead to a game over. The majority of your time with Night Trap will consist of multiple playthroughs where you slowly inch closer to its conclusion. Though I enjoyed the FMVs, having to watch them multiple times became tedious. No matter how much I initially enjoyed them, watching the same scenes for the tenth time made them lose their charm.The 25th Anniversary edition tried to alleviate this difficulty by including live feeds within the monitor thumbnails. The original release featured static thumbnails, which only added to the player’s frustration. The live feeds do improve the player experience overall, but only marginally. Praise must be given to the developers for acknowledging the faults of the original and improving them, though.

In fact, enjoying the story of Night Trap is detrimental to the player. Some key moments, such as security code changes, occur at the same time as the narrative. Trying to enjoy the corny story means that you will miss out on essential gameplay moments. This is a shame because the charm of Night Trap comes from the narrative. The gameplay isn’t rewarding or enjoyable, so watching 80s teens act awkwardly is all that Night Trap has left. For those who wish to enjoy the FMVs in their entirety, your best option is to watch them on YouTube. Trying to fully enjoy them in-game is extremely difficult and requires too much time and effort. The 25th-anniversary edition does include a Theater Mode, where you can watch all of the story-related footage. If you want to view the story uninterrupted, this is the best way to do so.

Included in the 25th-anniversary edition of Night Trap are survivor mode, several new skins for the monitors, documentaries, and an unreleased title called ‘Scene of the Crime’. The survival game mode removes the plot and instead focuses on the gameplay. The goal is to dispose of as many Augers as physically possible. It is a decent distraction and offers those who want to flex their Night Trap muscles a way to do so. The documentaries provide an interesting insight into the development of Night Trap and were enjoyable to watch.

The inclusion of ‘Scene of the Crime’ is very welcome. It was a proof of concept that demonstrated many of the gameplay ideas that would make it into Night Trap. The gameplay is very similar to Night Trap: you watch a group of people in a house through cameras. Instead of trapping vampires, you try to discover who is stealing the owner’s money. ‘Scene of the Crime’ is a great addition to the package, not because it is necessarily great to play, but because of its historical value. Rarely do we get to see a proof of concept come to life that is also playable. 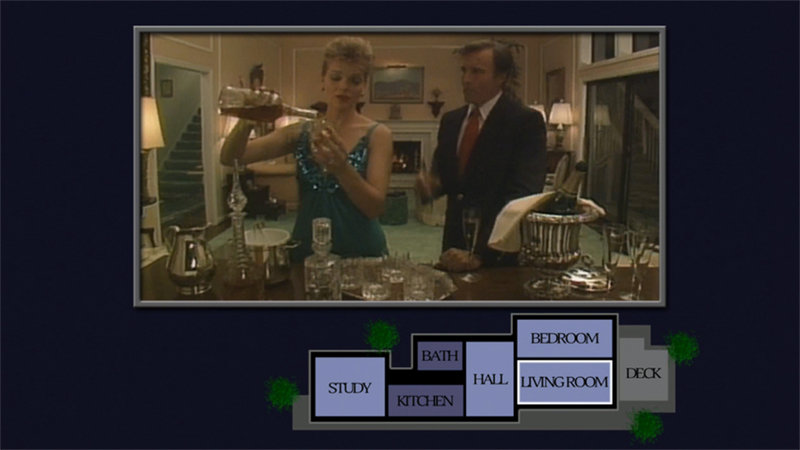 Night Trap 25th Anniversary is a nostalgic trip down memory lane. The inclusion of multiple game modes, documentaries and ‘Scene of the Crime’ make it a decent package for people who enjoy retro films and gaming history. Night Trap the movie is enjoyable and makes the entire experience so much better. Unfortunately, Night Trap the game is quite simply too repetitive. The immense focus on trial and error can make even those with high levels of patience frustrated. But if you’re keen on facing this prevalent issue, you may have an enjoyable experience playing Night Trap as intended. The cheesy story, ensuing controversy, and the hilarious FMVs have made Night Trap such an iconic title. But if you have no interest actually picking up the game, regardless of quality of life improvements, you may be better off watching the narrative play out on YouTube.