The Evil Dead was a labor of love.  The budget was minuscule and the work put into it was intense.  The actors worked through freezing nights in the woods and slept on rock-hard floors during production, which in a way added to the grimy, dark and horrific feel of the now classic film. For thirty-two years the movie has been a household name, garnering a cult classic status among horror fans and catapulting the careers of writer/director Sam Raimi and beloved actor/producer Bruce Campbell. It’s a Cinderella story; no one thought it would be such a hit, they just wanted to make a horror movie that tested the boundaries of film and the human psyche.

Centered around a young man named Ashley, his girlfriend Linda and their group of friends, The Evil Dead follows the generic mold of vacationing twenty-something’s in a remote location where all hell breaks loose – literally. In a rundown cabin deep in the forests of a mountain the group intended to get away for a couple days and enjoy nature, but upon finding an eerie book bound in human flesh and a recorded message describing its evil history they unknowingly unleash an ancient evil. 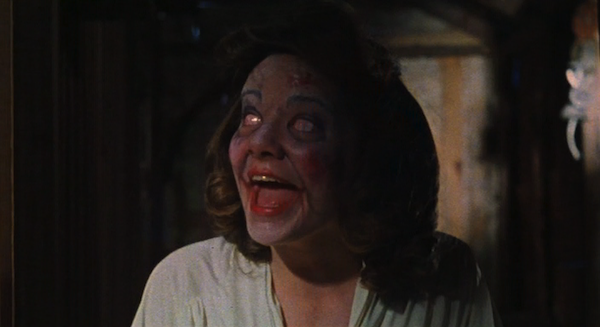 One of the most notable things of this movie is the camera.  Sam Raimi uses the camera in abrupt and frantic ways, bringing the tension and horror to life in creative ways that were original to viewers. Most notably, the POV shots or tracking shots of swinging or falling objects has become Sam Raimi’s trademark. Use of stop motion also brings he artwork of the Book of the Dead to life.

The film is dark not because it’s set at night, but because it employs a lot of questionable and gruesome photography and content. There is an awful lot of blood and decomposing bodies, (things that have become overly expected in most horror films today) but the creators also use psychological horror to get the audience engaged early on. A major debating point over the years is whether or not the film was meant to be scary or funny and arguments are valid on both sides, but it has generally been agreed upon as horror-comedy. I personally view it as a genuine attempt at horror. The basis of the film isn’t comedy, it’s horrific and the events that ensue once the vacationers arrive at the cabin would make the strongest man quiver. Possessions, demons, bloody pipes and kinky forests all populate this adventure into the woods. It has its flaws, what with questionable acting and visible crew, but those flaws have become reasons we love it so much; it’s like Final Fantasy IV’s first translation: sure it has awful sentences that make no sense, but we look back on it with fond memories. Indeed the campy acting brings humor, but all things considered I find the film to base itself in horror. 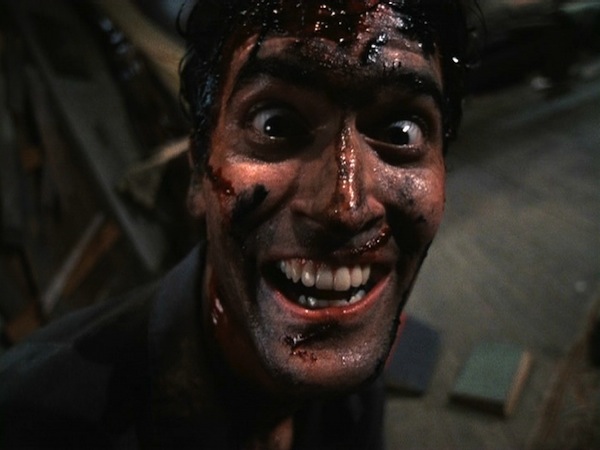 Ash is the protagonist and Bruce Campbell’s character has become an icon because of the fantastically catchy writing of the Evil Dead series. With his attitude and witty remarks he is easily a fan favorite on all accounts. However, in this first film he plays a more introverted and nervous man who is watching his world crumble around him. One by one his friends are possessed and killed, even by his own hands in self defense.  His girlfriend Linda also succumbs to the evil that has been unleashed by the book of the dead and we see Ash collapse into disbelief and pain that he must kill her. There are real feelings that are portrayed here. For a B movie and a small budget, this film pulls out all the stops in terms of making people fear the unknown. The ending is another item that is left open to interpretation. As Ash makes it through the night the evil seemingly dissipates, but just as he thinks he’s won, it rushes at him for one final blow and it cuts to the credits, leaving us questioning what happened to him. Given that the second movie is remarkably similar to this one, a lot of people view it as a remake, but my personal opinion is that it isn’t. I have my reasons, but I can dive into that some other time. 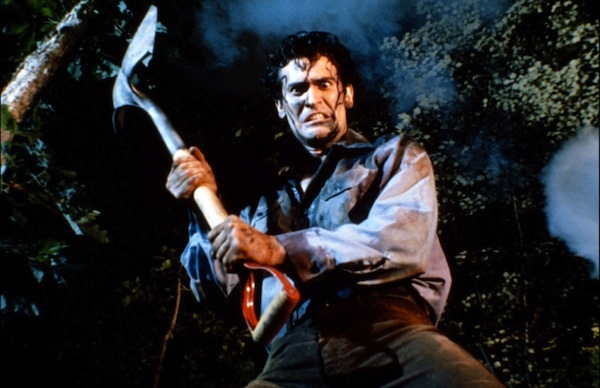 All together, The Evil Dead is a great movie. Fantastic camera work, a decent story and bold use of animation techniques bring this film to life and pushes the boundaries and credibility of B movies to a new height that few other films have been able to recreate. It’s not often at a movie that’s classified as B nabs its actor and director great careers – Bruce Campbell has had a steady acting career and is currently in his seventh season of Burn Notice and Sam Raimi has been at the helm of a few blockbuster films, i.e. the Spider-Man series. The Evil Dead is being remade and is releasing on April 5th. Fede Alvarez is directing it and Bruce is a producer.  From the trailer we can see it is perhaps a little more intense than its older brother and it is shaping up to be just as fantastic.