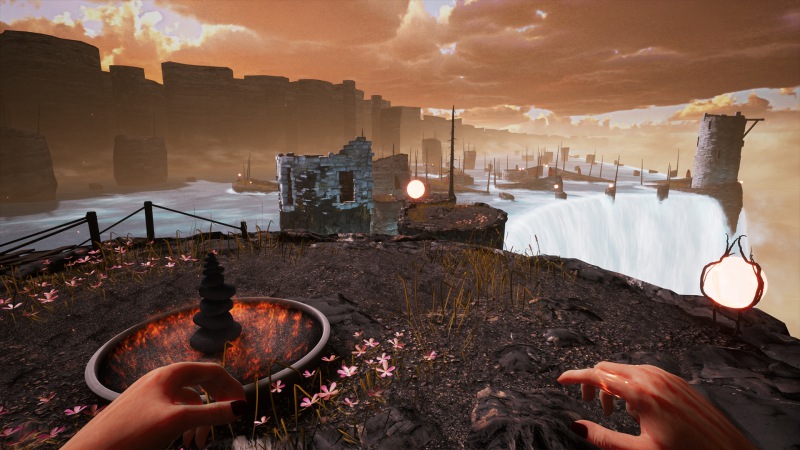 For the most part, I enjoy reviewing games. It can be a fun part of being a games writer, and more often than not simply requires me to play through a game and give my subjective thoughts on its design. Yet sometimes I encounter a game that is so infuriating at its very core that I struggle to properly articulate my experience with it. This is the easiest way I can describe Infernium, a horror-walking sim recently released on PS4, Xbox One, and PC.

The developer’s elevator pitch for Infernium is ‘horror meets Pac-Man’, but the truth is closer to ‘Dark Souls meets Myst’, with one-touch-kill Slender-style enemies inhabiting the world. The Dark Souls influence is the most palpable; players take control of a nameless wanderer navigating several large, intricate areas and lighting fires that serve as checkpoints should they die… which they will, quite a bit.

Infernium sells itself on being brutally difficult, and on paper I can get down with that. I like Souls games. They are harsh, but they’re based on a set of fair rules. More often than not, Infernium doesn’t feel fair; it simply feels smug, content to waste your time in the name of obtuse design. Enemies will relentlessly chase you, but unlike other horror games, there is no way to hide from them. You simply run until you find some kind of barrier they can’t cross. If you happen to find yourself in any of the game’s numerous visually-identical mazes, you’ll likely be chased into a corner, only to die. This happened several times in my first few hours of Infernium, and unlike Dark Souls, it never felt like I was learning from my mistakes. This is just the tip of Infernium’s problems. 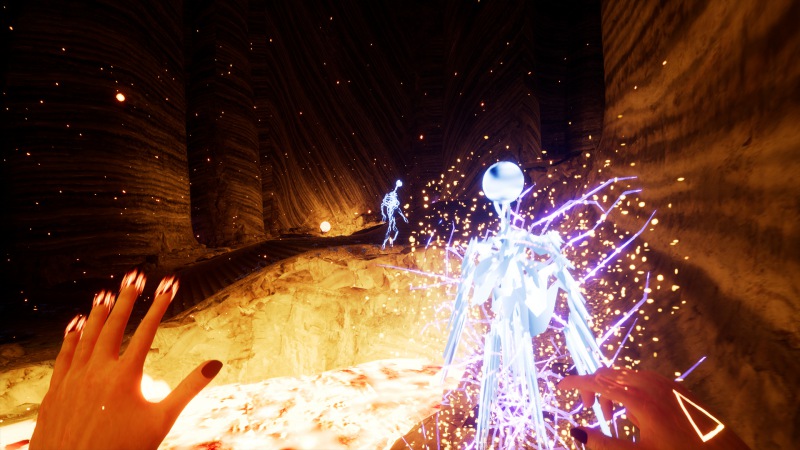 Every death takes you back to a large, black room with floating orbs which represent your lives. Die 25 times without replenishing any of them, and it’s game over. But between this and returning to your last checkpoint are always two individual loading screens, which take up a considerable amount of time as the game progresses.

And oh, how it progresses. Like Myst, Infernium places the player in an intriguing open-ended world filled with puzzles. That would be fine if Infernium‘s environments made more sense. Alternating between labyrinthine sections that delight in trapping you with the game’s unkillable enemies and vast sections of nothingness, navigating the world of Infernium is an unnecessary chore due to unexpected deaths and a confusing world flow.

The environmental flow of Infernium is maddening, to say the least. While there are several visually distinct areas that feel seperate from one another, many of them are easy to not find, and content puzzles that can only be solved after several more hours of exploring somewhere else. More than once, I spent multiple hours forging down one path, only to find I needed to backtrack to the main hub and explore somewhere else first. When I found the items I needed to progress, I still had to slowly saunter back to my destination. Without the frustratingly large and intricate environments, Infernium would have taken maybe 5 hours to complete, rather than close to 15.

Infernium was an aggressively frustrating experience for me, to the point where I can say that I didn’t enjoy it at all. But in its unique, complex, and infuriating design lies a core that I know others might find appealing. People craving a unique take on the ever-growing Souls genre, or a return to obtuse Myst-era puzzle design might find an intriguing- and even meditative- experience awaiting them. I don’t want to make it sound as though Infernium has no merit as a game. In spite of its flaws, it is a creative, beautiful vision of the afterlife. There is an audience for this game somewhere; I’m just not part of it.