Silent Hill 2 is a classic. Pyramid Head is iconic. If I could tell 19-year-old me that it would take 14 years to get an action figure, I might have given up waiting. It was 2001.

Back then, I was sure it would be no time before someone would capture this iconic beast in an articulated form. I eagerly followed toy news reports and convention galleries, hoping to see some hint of Silent Hill product in my near future. It never came. How did Silent Hill manage to slip through the gaps in a world of Master Chiefs, Chris Redfields, Liquid Snakes, and many others? Silent Hill seemed like a no-brainer!  In 2001, nearly everything had an action figure, courtesy of McFarlane Toys, but their mishandling of the Metal Gear Solid 2 Raiden figure would forever ruin the relationship they had built with Konami. There were hints and rumors that McFarlane negotiated for the Silent Hill license, but that partnership was now severed for good, as Konami would never work with his company again. Years would pass without a word.

It is 2015. Figma has finally given 33-year-old me what 19-year old me dreamed of. It’s articulated, it’s detailed, it includes numerous accessories, and like its’ creator, it comes from Japan! 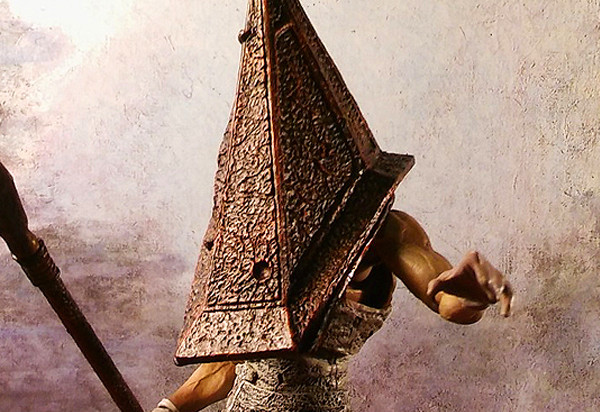 The Red Pyramid Thing is one of Freeing/Figma’s most recent offerings. It utilizes the Revoltech style ball-joints that have become the commonplace with hyper-style Japanese action figures, sharing design tooling with other similar lines, such as S.H. Figuarts.  It’s an imposing figure at just the perfect scale, and it includes a plethora of accessories taken directly from the iconic video game.

The Red Pyramid Thing includes five sets of hands(fists, open grasp, spear grasping, knife grasping, and open relaxed), which allow for several action poses. It also includes the iconic spear, the great knife, an alternate neck piece (that can allow the spear to be inserted to recreate the final scene), and an awesome flight-pose stand that allows Pyramid Head to be placed in nearly any pose you can imagine. The figure includes a “FIGMA” brand zip bag to keep everything stored while not in use. 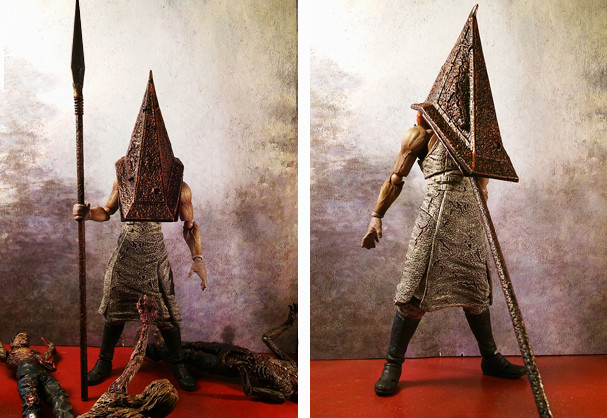 The apron is detailed and well engineered. The game model features a pillow-case like bottom to his apron design, with the bottom being closed and his boots sticking out through holes at the corners, a design that would restrict the articulation in the legs. Figma found a way around this by segmenting the apron into overlapping parts that simply split open, allowing full movement of the legs. When the figure is in a neutral pose, the flaps close, hiding the seams.

The paint job is detailed, but a bit soft compared to the harshness of the game’s model. The skin tone could have been paler, but it doesn’t detract from the overall quality.  The bladder that rests the helmet on the shoulders is a bit too orange but looks grotesque and detailed.  Note: I once asked Masahiro Ito (original designer of Pyramid Head) what that bladder-like object with the valve was, he said it’s a secret. 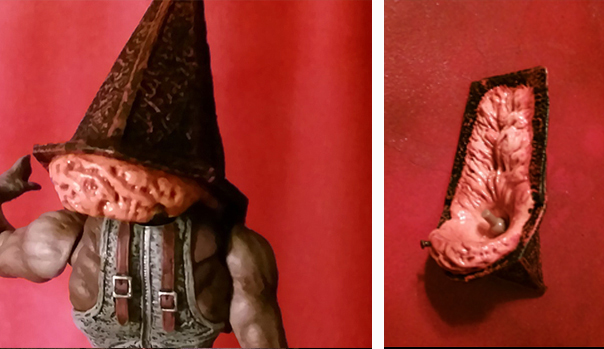 My best guess is that it’s meant to be a water-filled bladder that the executioners would use to cushion the helmet against their shoulders. Whatever it is, it’s rendered in a disgusting cancerous growth-like sculpt that fills the entire underside of the helmet, suggesting that Pyramid Head’s true head may just be a huge fleshy growth in the shape of a triangle. It looks disgusting and nicely detailed. 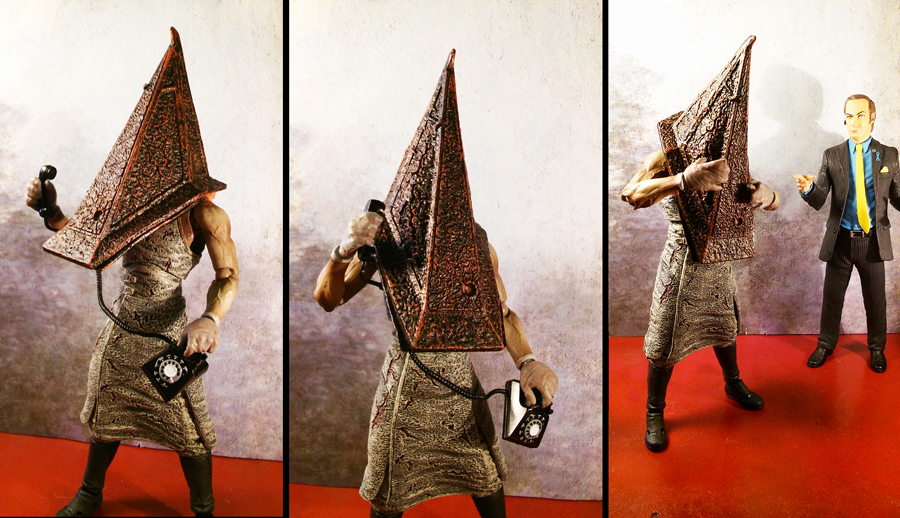 “Yeah, Saul? I’m in deep. There was this guy; his wife was sick…I don’t even want to talk about the mannequins.”

The figure boasts over 32 points of articulation (depending on how generous you’re counting), a detailed paint job, and more accessories than you’ll know what to do with. I recommend this figure to Silent Hill fans and anyone who loves a cool toy. It retails for about $55, and it’s easily available at plenty of online retailers. Figma is giving us all a reason to play with toys, again. Their next offering is a Silent Hill 2 style nurse, to be released in October!

We are not collectors; we are how action figures comprehend themselves.