For the past few years, there has been something that survival horror fans have been clamouring for.  Read any forum topic on the subject of how they would envision their perfect game and you’ll find similar responses.  Frictional Games, the creators of the often overlooked Penumbra series, have just what the doctor ordered.  Amnesia: The Dark Descent is available September 8, 2010 exclusively on the PC.  Read on to find out why Amnesia is the game that horror-gaming enthusiasts have been waiting for.

Frictional suggests that you not play the game to win, but rather to explore.  Let the game pull you in and envelop you in its dark atmosphere.  So dim the lights, throw on the surround-sound or a nice set of headphones and immerse yourself.

Amnesia puts you in the role of Daniel—a poor sap who wakes up in a Prussian castle with little to no recollection of who he is or why he is there.  While the ‘amnesia’ storyline might be a little dated, there’s a reason it’s been used so often.  It works exceedingly well here and anything more elaborate than that would have felt tacked on and needless.  Little by little, Daniel pieces together the mystery of who he is and why he is there.  And the fruit of his labours?  Let’s put it this way: Some things mustn’t be forgotten—but other things are better left that way. 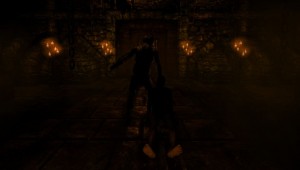 The controls are very much like your standard FPS control scheme—WASD for movement, F for light, you get the idea.  Through a first-person perspective, you see everything that Daniel does and you’re required to do all of the things that he does with the mouse.  Using a “grab mechanic,” click on a door and move the mouse to the right to open a cabinet door or pull the mouse back to open a drawer.  Using the R-button and the mouse, you can rotate items for a better view, or just to see what’s hiding inside of them.  Right click when an object is your hand and you can hurl it across the room–great for opening up new passageways!  All of these actions have a fairly realistic feel to them when they’re performed.  There’s a strange disconnect when you watch your character onscreen do something with the simple press of a button–no such disconnect here.  There are certain collision detection issues, one such instance a broom got stuck sideways in the closet, but it’s relatively minor; Frictional has done a great job on this!

The inventory is easily managed—there’s nothing overtly amazing about it other than that.  Here you can check out the Journal, to help you if you get lost, and the two health metres to monitor Daniel’s health.  A heart for his health and a brain for his Sanity Metre.

Anyone who has played Clock Tower or Eternal Darkness know exactly what this metre does.  Daniel is going to witness some pretty horrifying events in Amnesia, and true to form it’s going to affect his psyche.  Strange happenings around him are going to decrease his grip on reality.   And you don’t need to check the metre on the Inventory screen to know what’s going on.  Whispering from within the walls and other strange noises and a noticeable loss in balance let you know that Daniel is starting to lose it.  In one instance, he began to hug the walls and wouldn’t look forward, in essence hiding his eyes.  There is also a lag in movement when Daniel starts to panic, and what could be worse than bugs crawling on your face? All of this leads to a major increase in tension: you have to somehow maneuver this ball of nerves out of harm’s way.  Enemies aren’t going to go easy on Daniel because he’s crying like a baby in the corner. 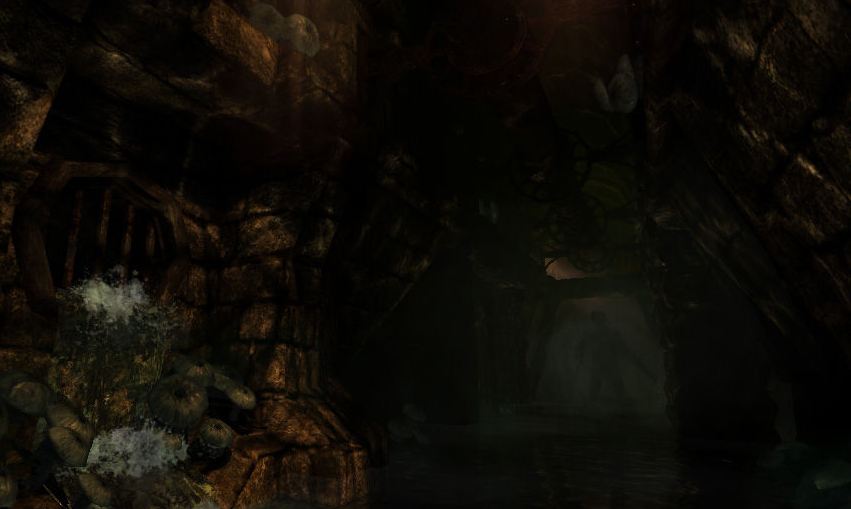 That brings us to our next point.  If you expected to go into Amnesia: The Dark Descent guns blazing, be prepared for epic disappointment. Like previous Frictional games before it, there are very few enemies in Amnesia—and you can’t kill any of them anyway.  This is where the real ‘survival’ aspect of the game kicks in.  Daniel is no match for these abominations, truly the stuff that nightmares are made of—so much so that he can’t even stand to look at them (it will decrease his sanity).  Some people are going to be disappointed with that, but the lack of combat doesn’t make Amnesia any less of a horror game.  Like the recent Silent Hill: Shattered Memories; in the Penumbra games before it, Daniel is realistically vulnerable.  The knowledge of the protagonist being helpless against these foes tends to intensify the experience.  But unlike Shattered Memories, Amnesia’s enemies, while slow to first show up, will show up whenever they like, keeping you permanently on the edge of your seat. 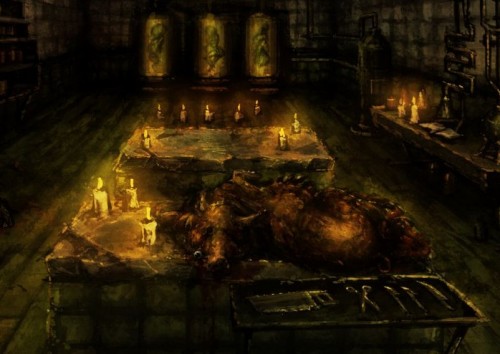 The game is made up of exploration, puzzle-solving, and getting the hell away from what enemies there are.  The game isn’t extraordinarily hard, but there are places where you’ll scratch your head trying to figure out what to do.  This can lead to a problem that we’d like to dub the “Got a Light?”  syndrome, further explained in the next paragraph.

The environments are rendered spectacularly—it makes you really want to explore the castle further, and the game rewards those that do in the form of lost letters, journal entries and other useful items.  The light and dark mechanics of Amnesia make Alan Wake look like RE5.  Looking down many a hallway without a light reveals nothing but darkness, and it is scary!   That being said, the oil to fuel your little lantern and tinderboxes to light torches on the wall or candles is extremely limited.  This hampers the desire (and requirement) of exploration as quite often we found ourselves in the middle of looking for a crucial clue in complete darkness–this causes Daniel’s sanity to dip and makes things pretty challenging.   There are bins of oil located around the castle, but that oil doesn’t last forever and soon enough you’ll be left in the dark again.  But fumbling around in the dark in Amnesia is more “ohshit!” inducing rather than frustrating. 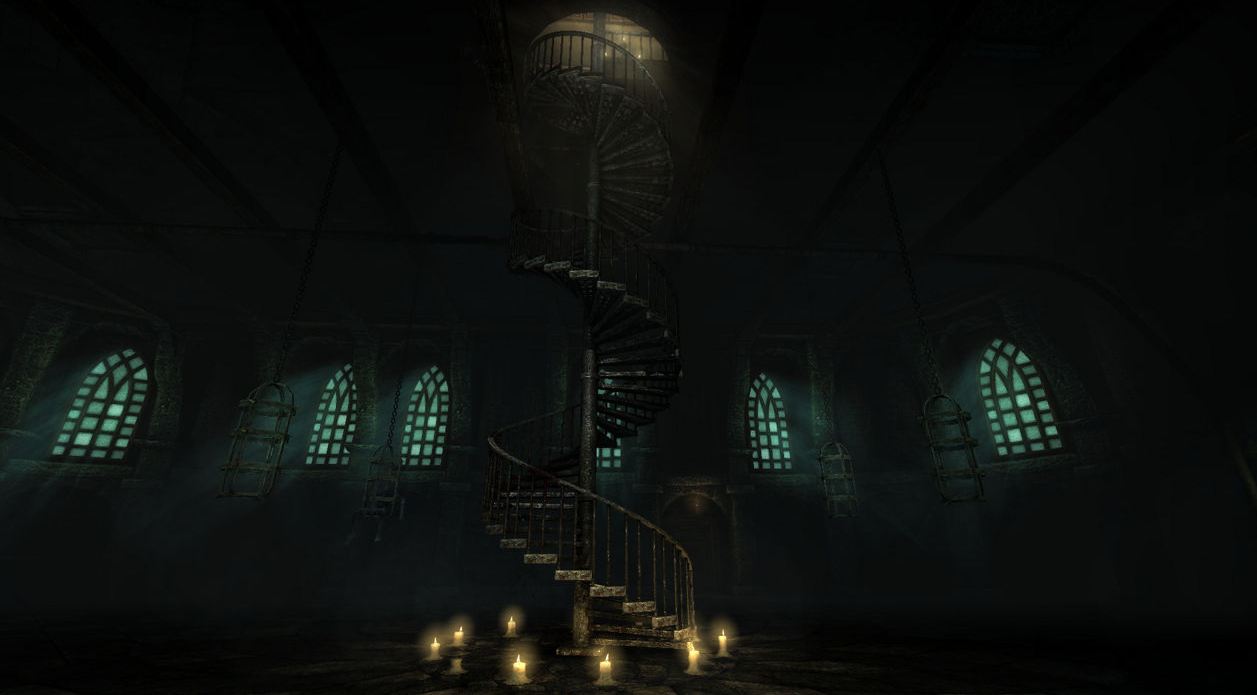 There are aspects of the visuals that we wish could be a little bit nicer to look at, but when looking at the big picture, it’s a non-issue.  The graphics may not stack up against some of the bigger budgeted games for the PC, but what’s here is done amazingly well.  Enemies look horrifying when you see them and other gruesome sights are just that.

Another element of every good horror game is a stellar soundtrack.  Even from the intro scene and the main menu, you can tell that Amnesia has this down-pat.  Taking a cue from Akira Yamaoka, sometimes there’s not so much an actual score in the background, but ambient noise, strung together to create a haunting sound.  Whispering in the halls, footsteps just around the corner, creaking floorboards above you, rolling thunder outside the castle—it’s all here in full form. 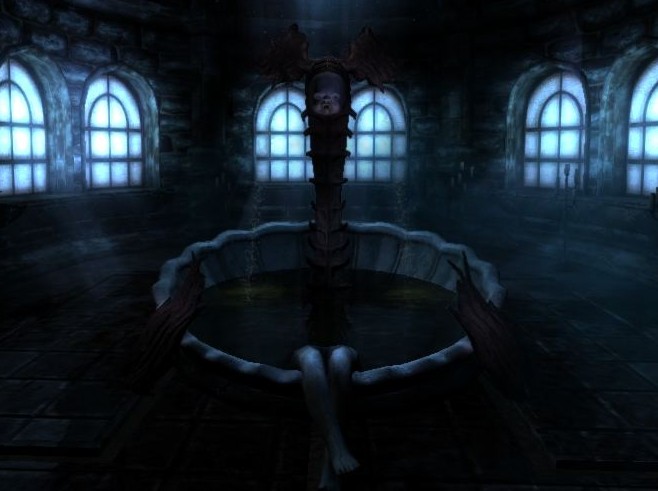 Amnesia offers an amazing survival-horror experience on the PC; a console that rarely gets any love from the genre.  As gamers, it’s rare that you see such a top-quality game for such a good value, as well.  Amnesia is priced at only $19.99 through Steam.  This is a game that could have sold for double and we’d still buy it, it’s that good.

–A game without combat doesn’t resound well with some gamers
–Some puzzles are going to leave you in the dark.  Which can either be frustrating or frightening depending on who you are

Amnesia: The Dark Descent is the best survival-horror experience on the PC and the game that survival horror fans have been waiting for.  With recent titles forsaking their roots to go the action-oriented route, Amnesia sticks to keeping the protagonist helpless and scared.  With haunting audio, superb visuals and the kind of story to make you want to keep trodding a little further into the darkness, Amnesia is set to keep you on the edge of your seat from beginning to end.