In 1979 horror was changed forever; “Alien,” directed by Ridley Scott, hit theaters that year to an unsuspecting crowd.  It was unlike anything America had seen and opened a new chapter in what was considered horror by bringing us one of the most beloved Hollywood antagonists, the Alien, (designed and developed by Swiss artist, H.R. Giger) and striking fear into its audience in an all-new way.  Now, 32 years later, and after some ups and downs the series continues with the production on “Alien 5”.  For the next few submissions we will be covering the first four films to get ready for the next installment which will hopefully bring the series to a close as Ridley Scott is coming back to direct an ‘Alien’ film once more; so as we wait in excitement for what could be the final chapter (even if it is a prequel) in one of the most beloved franchises, we look back on the films that changed horror and action alike and that inspired multiple films (and games) that followed them. 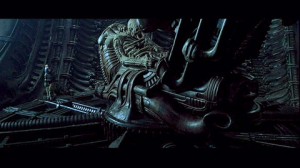 A glimpse of the detailed sets inspired by mastermind H.R. Giger

‘Alien’ follows a space mining crew on the ship Nostromo as it heads back to Earth to deliver its current payload.  As the film opens it shows us the vast innards of the mining ship and brings a rustic and claustrophobic feel to audiences right away.  In 1979 audiences had not seen anything so intricate and detailed when it came to film/television space exploration; there was Star Trek in the ‘60’s, but that had a completely different style with polished sets and crews with matching uniforms.  In ‘Alien’ we witness what looks like people living in an almost apartment setting, creating a home-like environment with a crew that wears ‘normal’ clothing.  The design of the clothing is also interesting as it has a futuristic styling, but is not what audiences were accustomed to seeing in futuristic films by looking somewhat dingy and torn, furthermore giving a brand new feel to what we as observers could imagine for possible life in space; as a whole it was a new take on space exploration and it stuck with its audiences.

Tom Skerrit helms the crew as Captain Dallas, followed by Ian Holm as Science Officer Ash, and Sigourney Weaver (a newly discovered actress for this film) as Warrant Officer Ripley.  Other crew members include John Hurt as Executive Officer Kane, Lambert, played by Veronica Cartwright, and two engineers, Brett and Parker played by Harry Dean Stanton and Yaphet Kotto. Every character in the film plays a decent part in bringing the story to life; Dallas is the worn, almost grumpy Captain who is just trying to maintain the peace while doing his job, Brett and Parker are the grunts who would just as soon not work than do anything without knowing when they get paid, Ash is quiet and only offers his opinion when matters are dire and he tries to be the voice of reason throughout the crew’s almost constant feuding.  Lambert is a nervous wreck about most things, questioning everything and wanting only to get home.  Kane is second in command to Dallas and is much contrasted in personality as he is always eager to engage in exploration and seems very interested in his job.  Ripley is the main protagonist who follows strict orders and protocol to ensure her crew’s safety. 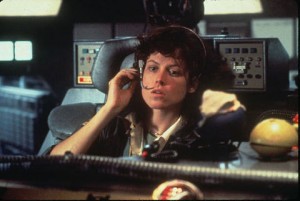 putting up with each other until they get home.  Shortly into the film they pick up a signal from an unknown origin on a nearby planet.  Under contract with their company, Weyland Yutani, they are required to answer any intelligent communications with an investigative crew.  After hearing the unclear signal and under much debate on whether to do anything with the beacon they ultimately decide that they must investigate under contract or their shares will be lost and no one will get paid.  Kane, Dallas and the hesitant Lambert decide to go and search for the source.

Once on the planet, they discover a huge ship that has crash landed and is unlike anything they had ever seen.  Finding a way into the ship they find themselves in a dark, moist environment that looks almost skeletal in construction.  Ridley Scott does a great job of keeping the tension high in showing the audience set pieces never before seen with intricate designs, a foggy environment and a score that lends its hand in keeping people on the edge of their seats.  The party disbands into separate paths and as Kane wanders into the bowels of the ship we get our first glimpse of alien life.

Without giving too much away, the crew encounters the alien that eventually gets aboard their ship on the way home and things get tense, emotional and bloody, all of which make for a good horror film.  The cinematography really sets the tone for the movie and keeps the claustrophobic vibe with viewers through its entirety and the characters perform admirably as well.  Sigourney’s Ripley turns out to be one of the strongest women ever seen in a series of movies and has become an icon with her performances in the franchise. 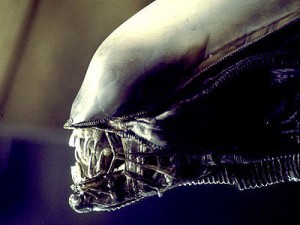 An icon...brought to you by H.R. Giger

The ending is also exceptional as it delivers one of the best surprises of the whole film.  Leaving some things unexplained, the ending offers the possibility for revisiting the story and finding out more about the aliens.  After the credits begin audiences feel a little relaxed and accomplished even though they have not done anything but observe the events on screen because so much was going on and so many things were at stake for Ripley and her crew.

This is one trip into space that everyone should experience at least once and if any fan of horror has yet to see this film (by some chance), they must.  It is a staple in the horror community and set the bar very high for films and games of its nature to follow.  Take ‘Dead Space’ for example, and while it is completely different than ‘Alien’ in terms of story and technology, it definitely draws influence in terms of execution and environments, what will make players jump.  They captured the essence of ‘Alien,’ which is horror with a great story and characters you can grow with.

With three sequels, ‘Alien’ stands tall and although the series has taken many turns -some for the worst- it still stands strong as a beloved franchise and one of Hollywood’s main attractions.  As we wait for ‘Alien 5’, we can reminisce on a great film that pushed the envelope for horror and gave audiences something they had never seen before.  When ‘Alien 5’ hits theaters we hope it sends us back to what began one of the best sci-fi horror series in movies.

I chose not to go into much detail because you must experience this fresh.