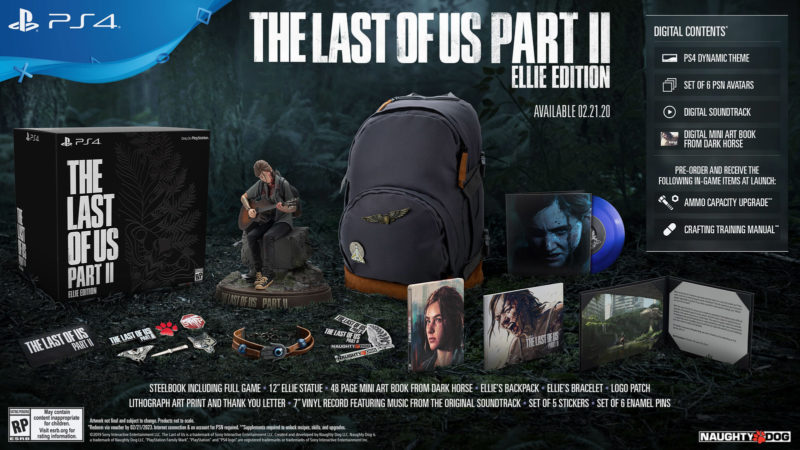 With a bang, PlayStation’s September State of Play came to a close with an all-new trailer for The Last of Us Part 2, which delved further into the story and gameplay than most of the footage we’ve seen so far has. Brutal, bloody, and horrifying, the world of The Last of Us ramps up tenfold from the previous title, and I’m in love with how deliciously gruesome the blood and gore effects are. Admittedly the trailer is… kinda spoiler heavy, so watch at your own risk. I’ll talk about it below as well, so if you want the bullet points, The Last of Us Part 2 releases February 21st of next year, and there are several editions available for pre-order.

There’s the Standard Edition of course, which comes with the game (obviously) a… digital copy of the game (like a second copy? correct me if I’m reading that wrong?) and a PS4 avatar. There’s a Special Edition that’s all that as well as a Steelbook and art book, and A ‘Collecter’s Edition’ is available for $159.99, that includes a statue of Ellie on her guitar, her bracelet, some stickers, enamel pins, and a bunch of digital stuff for the game and the PS4. There’s also an ‘Ellie Edition’ for a whopping $249.99. This comes with all that stuff, as well as a backpack and a vinyl of the score. It is a lot, but that is honestly quite a bit of stuff for the price. The Last of Us will also be a two-disk game, which is pretty rare (although obviously not unheard of) for this generation. It’s time to delete Red Dead 2, folks.

Onto the trailer then. Again, it’s a smidge spoiler-y so be forwarned. I’m pretty surprised at just how much this trailer appears to reveal, as marketing has been tremendously vague up until now.

So yeah, nice to see everyone again, even if they’re all super old and even sadder now. I really love how this game is looking, and I’ll be happy to be back in that universe again come next year. The story is… interesting looking, of course, although I’m a bit miffed that it seems to just straight-up give away the death of Ellie’s girlfriend. That could’ve had some emotional impact when playing, especially considering what a gut punch the original game managed in under an hour with characters that had essentially zero backstory up until then (not to mention with other characters they meet along the way). Giving it away essentially wipes any and all give a shit we could have about her. It’s also a bit tiring to see that, despite how neat it was to see such a major first-party title giving a little spotlight to an LGBT character instead of hiding it in some DLC or something, that it just wraps back around into the ‘bury your gays’ trope. It is the depressing, death-filled world of The Last of Us, and it’s pretty easy to predict that a horrible thing was going to happen to Ellie and her lover, just expected maybe a smidge more than this from Naughty Dog.

Regardless, we’ll see how it all shakes out come February 21st, 2020, on PlayStation 4.