With a demo now available for The Darkness 2– exclusively on Xbox Live for the time being– we here at Rely On Horror are very pleased to offer our opinion and get our hands on such an anticipated title.

Be warned, the following article has spoilers of the contents of The Darkness 2’s Demo in its entirety. The following brief synopsis was included for those who do not have access to the demo either by XBL membership status or due to platform limitations.

“My father once told me. You can’t outrun fate. But you sure as hell gotta try.” The first words we hear from Jackie Estacado as he touches back to his tortured past and one thing that haunts him to no end: the loss of his beloved Jenny. Jackie quickly comes to find himself in trouble. Three people, as well as a whole lot of trouble, surround him.

It becomes apparent to Jackie rather quickly that a plan is in motion. A hobbling man makes it clear he wants the Darkness to be “returned” from Jackie with no regard for Jackie’s mortal well being.

We then flash back to a scene that has Jackie being escorted to his usual table by Vinnie where “the twins” are waiting for him.  No sooner could Jackie have a second thought at what’s to come before a bullet comes sailing through the window and one of the twins’ skull. Chaos fills the restaurant as fast as you could say “darkness” and soon only chaos and the title: The Darkness II. 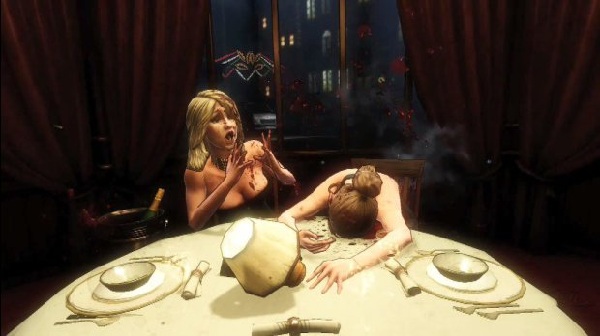 Back into the action after the title. Vinnie drags Jackie along on the narrow road to survival. Once inside the kitchen, Vinnie and Jackie are victim to a mob style “light up” causing a fresh gas leak. “Burn in hell, Estacado!” is yelled as a molotov cocktail enters the room…

Flashing back and forth is apparent for a while with Jackie fighting for survival. Eventually he cannot contain the Darkness anymore. It is released with a very satisfying cry.

After healing Jackie’s leg, we get control of our new abilities. Jackie fights through the alleys before seeing what seems to be  Jenny through Jackie’s mind but quickly disappears. On with destruction!

It is soon, we get a glimpse of a Darkling that has Jackie’s back while humorously calling him “Monkey”. Any hero(or villain) needs a sidekick, right? 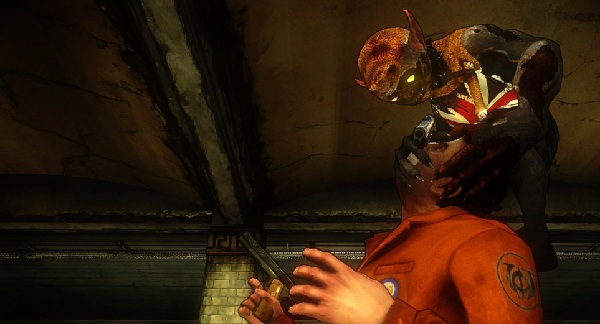 A bit of fighting with his new Darkling Friend and a lot of ammo enemies and a flashback later, Jackie finds himself once again dispatching enemies. He is faced with another Jenny appearance. He runs for her and all goes white in the headlights of a train with both him and her apparition about to be hit. Then we find Jackie back to being crucified in the basement. Jackie escapes his binds and makes quite an effort. Again on the ground with one final dialogue exchange. We are set up for the sure thriller that this game will be. 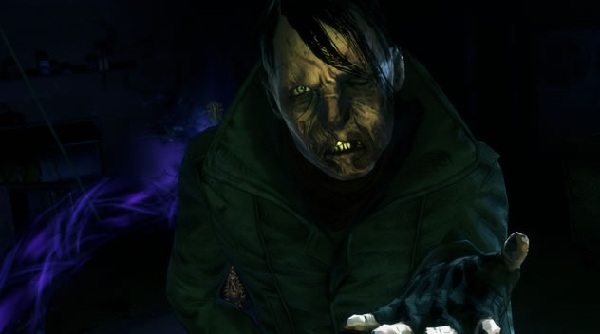 The action-packed demo really only has a few moments where the soundtrack shines through. The title screen hits us with a great mix of moods. “Sadly Serious” comes to mind. Great higher toned dark music is conveyed with the faint sound of choir in some parts. I believe I even hear a harp in the background. It’s a very great mixture. Moments with Jenny are accompanied by some gentle sounding scales on a piano. It conveys a feeling of loss and really conveys the knowledge of how much Jenny meant to Jackie and how torn he is that she is gone; his one true love. I look forward to more of this game’s soundtrack.

Expanding on what we had before with the original title, The Darkness II demo hits home with one of the core aspects: making the player feel very powerful with special abilities. Being that force to be reckoned with is always enjoyable. They find a great balance of challenge and always keep the pace moving. One thing I liked very much is that it is very hard to stick to one tactic in terms of combat. Players are constantly required to utilize all of their powers and abilities available to them to progress. Ranged combat with guns or projectiles, close combat with the Dark Powers, and dual wielding guns can even reap great benefits in certain situations, but also have their downfall with lack of precision. From co-op with your Darkling friend, to holding car doors as shields, there are many tools to be used and rest assured, they will all be used. 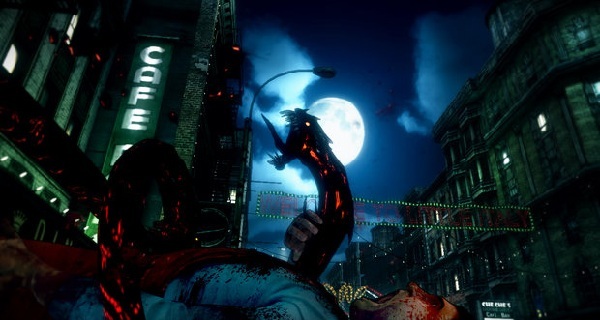 The controls are simple enough and felt natural from the start, utilizing the triggers and bumpers for combat. It appears there are going to be four options when grabbing a person with the dark powers (LB). At this point in time, there was only one option available which was to press “A” to execute your enemy which was very satisfying and had three different outcomes. RB by itself or with a movement of the right joystick created a slash with the dark powers. This can rip people in half or damage them, it will also be needed to break through obstacles, etc. There is an ability to duck which was very useful, although different than most games being initiated by clicking the right joystick. Also, there’s a status sensitive mechanic where you can only grab an enemy after a they have been hit by a bullet, slash or projectile making their heart and surrounding anatomy glow a bright white.

The handling of this game is something that is almost perfectly balanced. Realistic in terms of aim difficulty, it isn’t close to the Call of Duty aim feel as I expected. It has a realism to it and especially being dragged through the restaurant, I really felt like I was being dragged while trying to shoot. Very well done as most games live or die by how they control, especially with a FPS. Sprinting is included but I never really felt the need or urge to ever use it. Having to shoot out the lights was something to be very aware of as it can cause problems very fast if you are not careful. Jackie thrives in the Darkness and they really want you to live by that requirement.

Diversity is really a goal 2kGames had when they tackled this game. One of the only criticisms the first game had from me was the impression that we could really control many things that turned out to be pre-rendered animations in intense moments during the game. This game really gives you choice. From picking up car doors to trashcan lids and ladders, to pistols,shotguns and uzis, to having skill trees to slowly upgrade all your new powers throughout the game. Speaking of which, I took the liberty of taking down all the abilities listed in general ascending order. Here they are:

With all that In Jackie’s hands, does this guy really stand a chance? 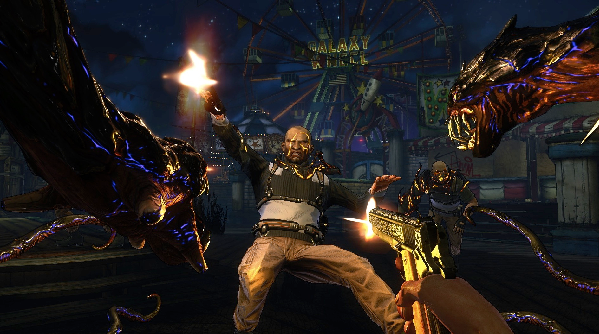 This game takes a rarely attempted approach in terms of shading and presenting their characters’ 3D models. There is a heavy animation style reminiscent to a motion comic on 3D objects. This completely fits the franchise, but they do not use this in the surrounding area which gives the game a sense of intense realism with the comic flavor on the side; a great mixture. Other Games that have used similar animation techniques with the actual characters are “XIII”, “Dragon Ball Z: Budokai Tenkaichi 2” and “Borderlands” being the most recent. The Darkness II does a great job of keeping the player in a state of power as well as struggle. It is a story worth telling and there is always a dark vibe in this universe, even when looking at Jackie’s one true love. The Darkness itself with its wielded creatures along side Jackie’s vision are looking better than ever also, heavily interacting with everything around.

Relics: Items that look to be the likely hidden treasures in the game. Each Relic has a description and a bit of history. The one I found talked of the Darkness’ origin and what is now known as “North Carolina”. I misunderstood what the Darkling was saying when I first saw him. Thankfully, there was a subtitle option in the options menu that helped things along quite a bit. Nice touch.

Being a person who was just made aware of the series with the first game, and enjoying that first game from start to finish, I find this demo only makes it harder to wait for the full release on February 7th. I now have the urge to go back and play through the first game. This installment clearly expands on everything we knew with the first game as well as continuing to tell a great story, not betraying the character of Jackie Estacado in the slightest, from what I can tell. It will essentially be a game that makes us feel empowered with a touch of human mortality here and there. And some clearly heartbreaking moments realizing how precious a lost love really is to somebody like Jackie. The Darkness II will have me embracing my own Darkness. The Darkness of my game room when I play this game from start to finish. It truly looks like it warrants a buy at this point.

Expect more on this title from all over as it hits on February 7th, 2012 on PS3, Xbox360 and PC. PC and PS3 owners will be able to sample this demo on Tuesday January 24th, 2012. We will also have our review for your reading and viewing pleasure so be sure to stop back in and check out all of our breaking news!