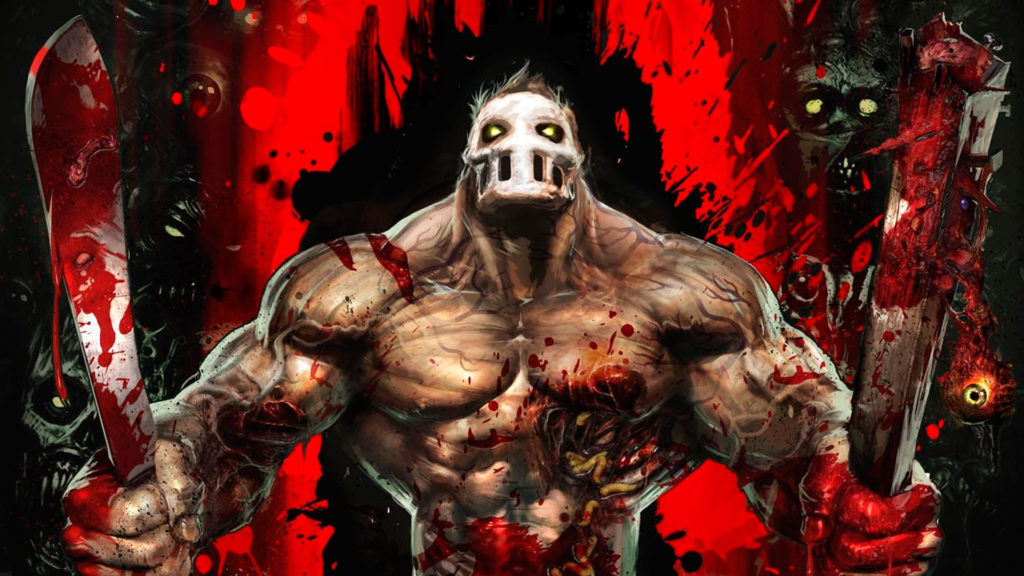 A year ago, I wrote a retrospective article on my favorite horror hack and slash game of all time, Splatterhouse (2010). This November 23rd marks the game’s 10th anniversary, and I thought now would be a perfect time to take a look back at the game, talk a bit about its legacy and what made it so gut-splatteringly great.

It’s no secret that Splatterhouse (2010) had a troubled development and saw many delays. It was initially developed by BottleRocket Entertainment, then later completed and published by Bandai Namco. When it was eventually released for PS3 and 360 on November 23, 2010, many critics wrote it off as a shallow, sub-par brawler with janky mechanics and a lackluster story. The game averaged roughly a 60% aggregate score on Metacritic. User reviews were much more favorable, however, and the game earned a 7.9/10.

I won’t talk too much about the critical consensus at the time, except to say that I didn’t agree with it. I loved Splatterhouse (2010) when it came out and I still love it (I even pre-ordered it to get the GameStop-exclusive 6” Terror Mask Statue replica). What I will go into is how much I adore this game. Since I went into much greater detail in my previous article, I’ll keep this one brief. This will be more of an overview of the game and my own personal experience with it.

I first played Splatterhouse (2010) the day it came out. It was a chilly November evening, Halloween was over, and the year was coming to a close. Every time around this time of year my thoughts turn to that game on some level and I remember how much fun I had with it. It would go on to become a Halloween/Fall tradition for me and it’s a game that has held up well in the decade since its release.

Splatterhouse (2010) works for me on a very basic level. It’s an unapologetic love letter to both the original 1988 Splatterhouse arcade game and the eighties splatter films that in turn inspired the original. Based on that expectation, I was very pleasantly surprised to find out that not only was its gameplay above average, but its story was, too. Frankly, the story is way better than it needed to be for a game like this. The developers went out of their way to not only reference and blend countless plot points and callbacks to the original 1988 game, but also craft a compelling, intimate, and emotionally resonant story that works on its own terms. 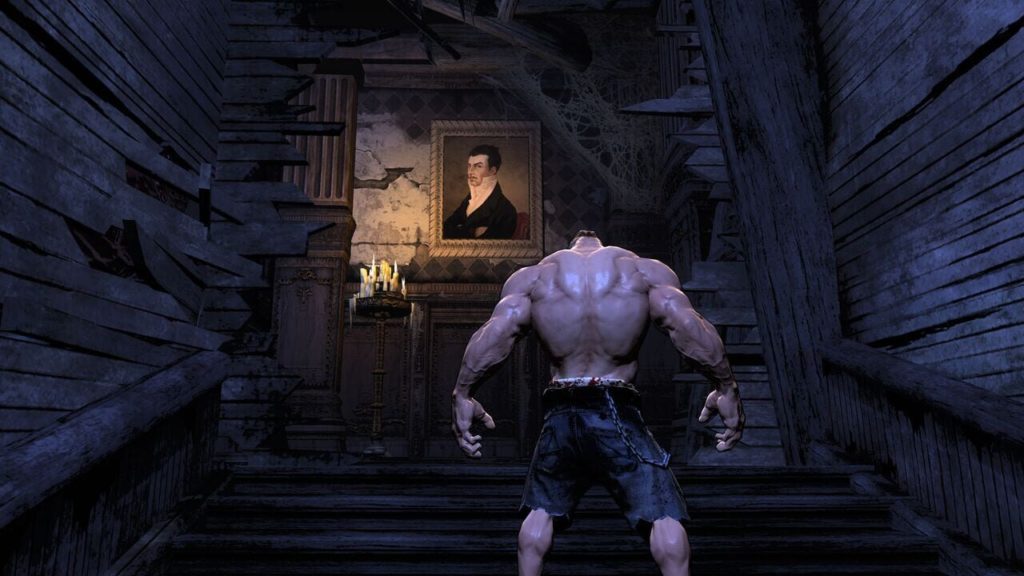 The game starts off simply enough. Nerdy protagonist Rick Taylor is on a quest to rescue his kidnapped girlfriend Jennifer from the clutches of the mad scientist Dr. West. Early on, Rick teams up with a psychotic, talking Terror Mask that transforms the geeky teenage into a hulking giant. While that seems like a pretty generic premise on the surface, the game uses it as a jumping-off point to tell a much deeper narrative involving Dr. West, lost love, the nature of evil, dimension-swapping, and the cyclical nature of time and prophecy, all under the veneer of a crude, blood-soaked, beat ’em up. I really enjoyed the story and was grateful the developers took their time to flesh out what could have easily been a very run-of-the-mill narrative.

The dimension/time-swapping you get to do as Rick gives the game an organic excuse to showcase a variety of interesting and exotic locations, including the vast interiors of the West mansion, a haunted amusement park, a booby-trap-filled dungeon, a grimy meat factory, and an apocalyptic cityscape, among others. In addition to the fantastic main game, Splatterhouse (2010) also includes the original Splatterhouse 1, 2, and 3 as a bonus for beating it.

The gameplay is violent and gory, and the brutal, merciless killing you dish out as Rick is sickly satisfying. Punching, slamming, ripping, and pummeling your enemies with everything from your fists to their decapitated heads, is fluid and responsive. Very few games can make you feel as dominant and capable as you dispense bloody punishment and carnage as Splatterhouse (2010) does. Fewer games still give you the opportunity to literally be covered in blood. Without hyperbole, I can easily say that this is one of the bloodiest, goriest games I’ve ever played, and that’s saying a lot. Maybe it’s the gorehound in me, but I love stuff like that. 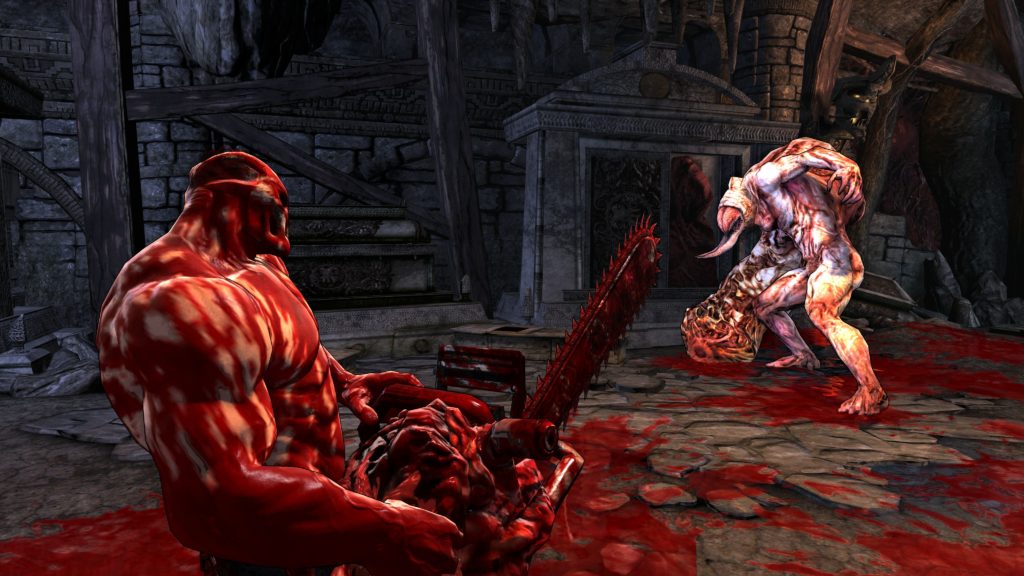 Splatterhouse (2010) doesn’t apologize for its blood and guts. Far from being a gimmick or done solely for shock value, the gore in the game actually has an important role to play in the story and gameplay, and functions as the game’s version of experience points. The more blood you soak up into your Necro Meter, the more abilities you unlock. Rick can upgrade different abilities the more blood he collects, incentivizing players to get creative with their kills. One of the most fun of these is Berserker Mode, which lets you use a chunk of your Necro Meter to transform Rick into a monstrously roided out version of himself, able to pull off ridiculously powerful moves, like extending room-clearing blades out of his arms, enabling him to decapitate multiples enemies at once.

Not only are you able to dispense brutally violent moves, but you can also take an extreme amount of punishment yourself. Rick has a dynamic damage system that gets worse the more abuse you take. As you take hits, deep gashes will split open across his body, exposing guts, muscle, and bone. He can even have limbs ripped off. Luckily, you can revitalize yourself by soaking up the split blood of your enemies. If you take too much damage, however, it’s game over.

I initially played the game on its Normal setting (Savage) and after beating it, immediately started a second playthrough on Hard (Brutal). While the game is challenging on Normal, it definitely lives up to its name on Brutal and significantly ramps up the difficulty. You really have to master all your special moves and use them strategically (especially absorbing enough enemy blood to refill your health meter and initiate Berserker Mode) if you want to beat the game on its hardest setting. 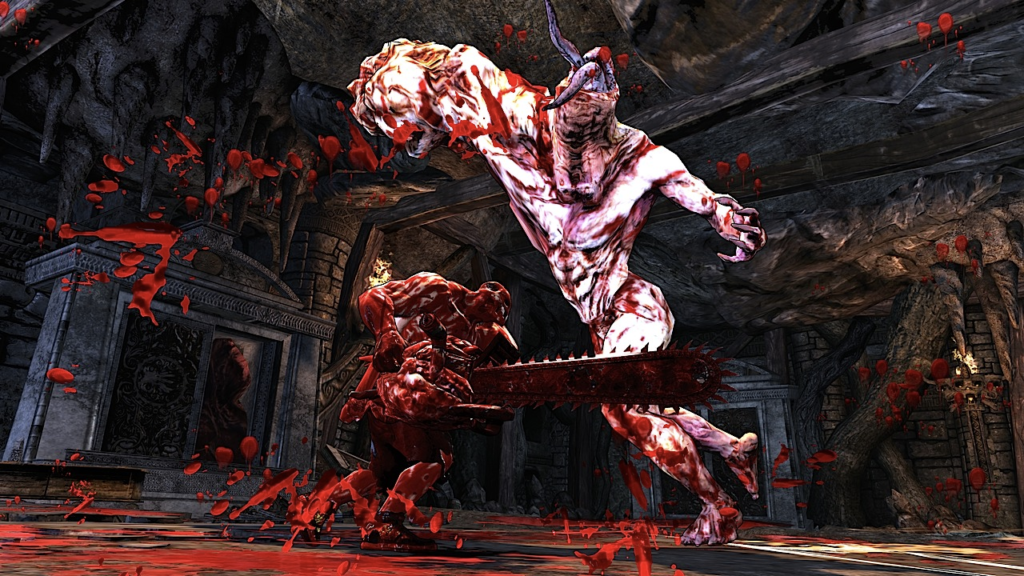 Overall, I loved just about every aspect of Splatterhouse (2010) from its story and gameplay to its level design, thrashing death metal soundtrack and ballsy ending. It’s a shame more people haven’t played it. I could easily talk about this game all day long, but you really just need to go out and play it for yourself to get the full experience. Having the option to watch playthroughs online is nice (if you absolutely have to) but there’s no substitute for actually having a controller in your hand and experiencing the game firsthand.

Right now, prices on eBay for both the 360 and PS3 versions of Splatterhouse (2010) are relatively cheap. Assuming you still have either of those systems, now would be a great time to check the game out, if you haven’t already. Unfortunately, they are not backwards compatible with newer systems.

For anyone interested in a comprehensive history of Splatterhouse’s development, you can check out the excellent 2018 Polygon article by Matt Paprocki, which delves deep into the game’s rocky development and legacy. Another good site for all things Splatterhouse is the all-inclusive West Mansion, which has tons of info on not only the 2010 entry but all games in the series. 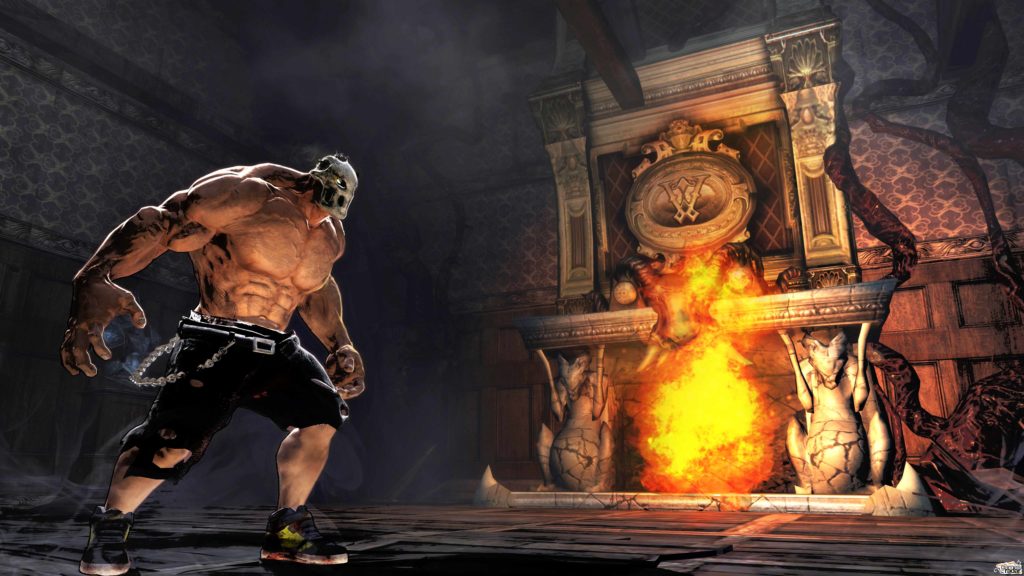 Splatterhouse (2010) has stood the test of time. It successfully blends an uncommonly smart story and buckets of blood and gore, with solidly satisfying brawler gameplay. While it hasn’t gotten near enough attention as it should have over the years, for the devoted, and those willing to give the game a chance, it will no doubt satisfy your bloodlust and have you coming back for more, year after year.

In honor of the game’s 10th anniversary, I would like to personally thank everyone at BottleRocket Entertainment and Bandai Namco for crafting such a masterpiece of grindhouse-style, exploitation horror that to this day remains a classic of the horror/hack and slash genre.