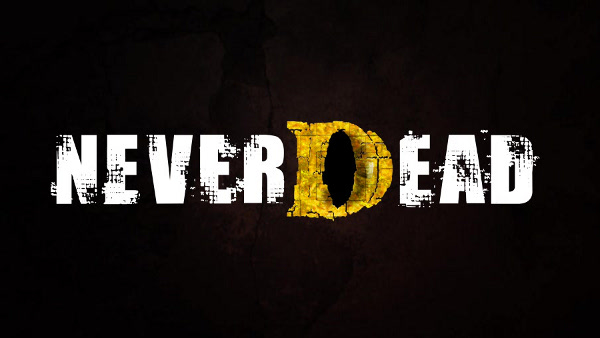 How do you approach a game that feels like it would have been a fun and interesting title at the launch of the current generation of consoles? NeverDead falls into this strange and confusing category of a decent but dated game that could have wowed people if only it had released a few years ago. What we’re left with is an underwhelming, but just short of decent, hack and slash adventure title that tries to impress by using features that would have been exciting if seen for the very first time.

NeverDead follows the story of immortal demon hunter Bryce Boltzman. Bryce and his wife were defeated in battle by the demon King Astaroth over 500 years before the game takes place. Bryce’s wife died and he was left cursed to be an immortal to suffer with the grief forever. The story sounds sort of interesting, but the game lacks presentation. You can see what the developers intended to do but didn’t achieve it. 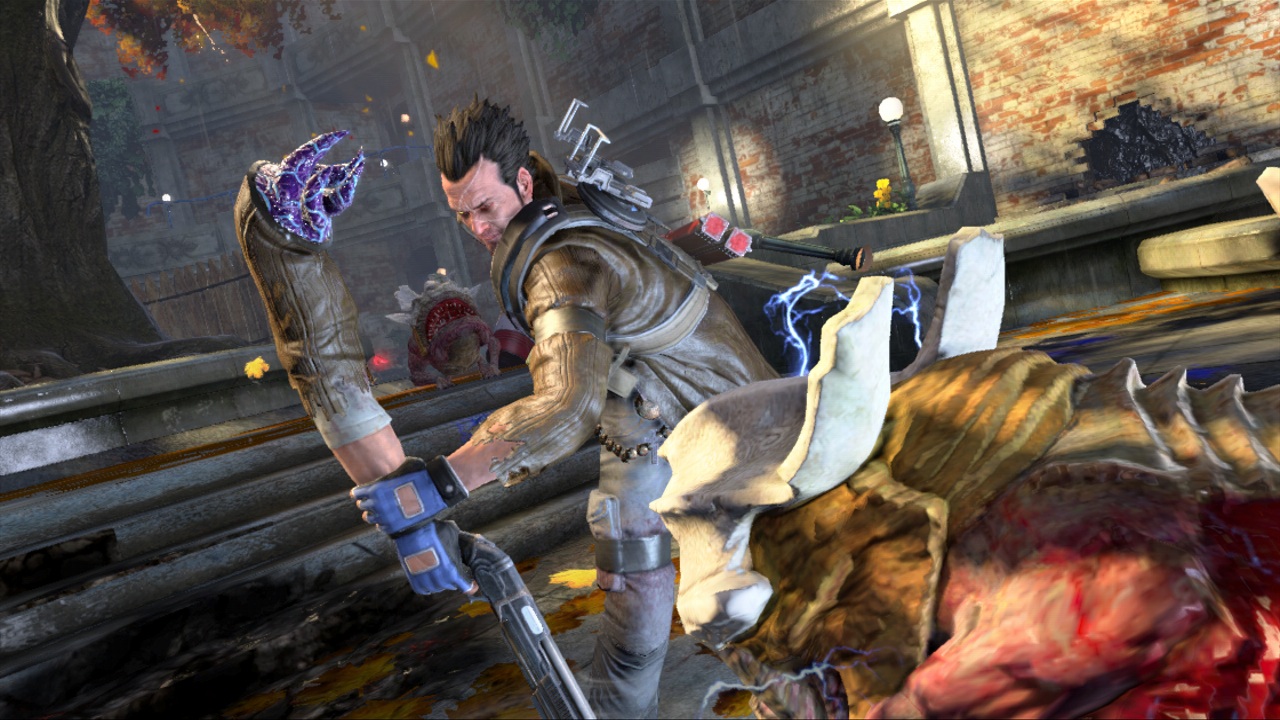 Fast forward 500 years and Bryce is still going strong as a demon hunter. Along with a new partner named Arcadia, Bryce continues hunting lower level demons for the National Anti-Demon Agency (NADA). From what I assume, demon attacks have started to become more frequent with the arrival of the Duke of Demons, Sangria. Sangria has to be the best thing about this game. He’s an overly flamboyant bird-man with an insane amount of muscle. Seeing him at the start of the game was hilarious yet terrifying. It’s a shame Sangria’s presence is as limited as it is. He offers up more personality than any other character or the game itself.

After playing for two hours or so, the game finally gives you an idea about what the hell is the point of it existing. Bryce meets annoying pop singer Nikki Summerfield. For some reason the demons want her. Why? I could spoil it for you, but I hate spoilers—even in a game with a story as shallow as this one.

So, the demons want Nikki, and Bryce and Arcadia spend a few levels trying to prevent that. You find out why they want her (what a twist), and then fight some more demons until you reach the end of the game where there is a fight to avenge the past. As you can tell, I am not thrilled by NeverDead’s story. It’s pretty lackluster with vague hints of trying to be emotional and significant. I guess you can say it gives the characters some reason to be doing what they’re doing, but it’s just not interesting. 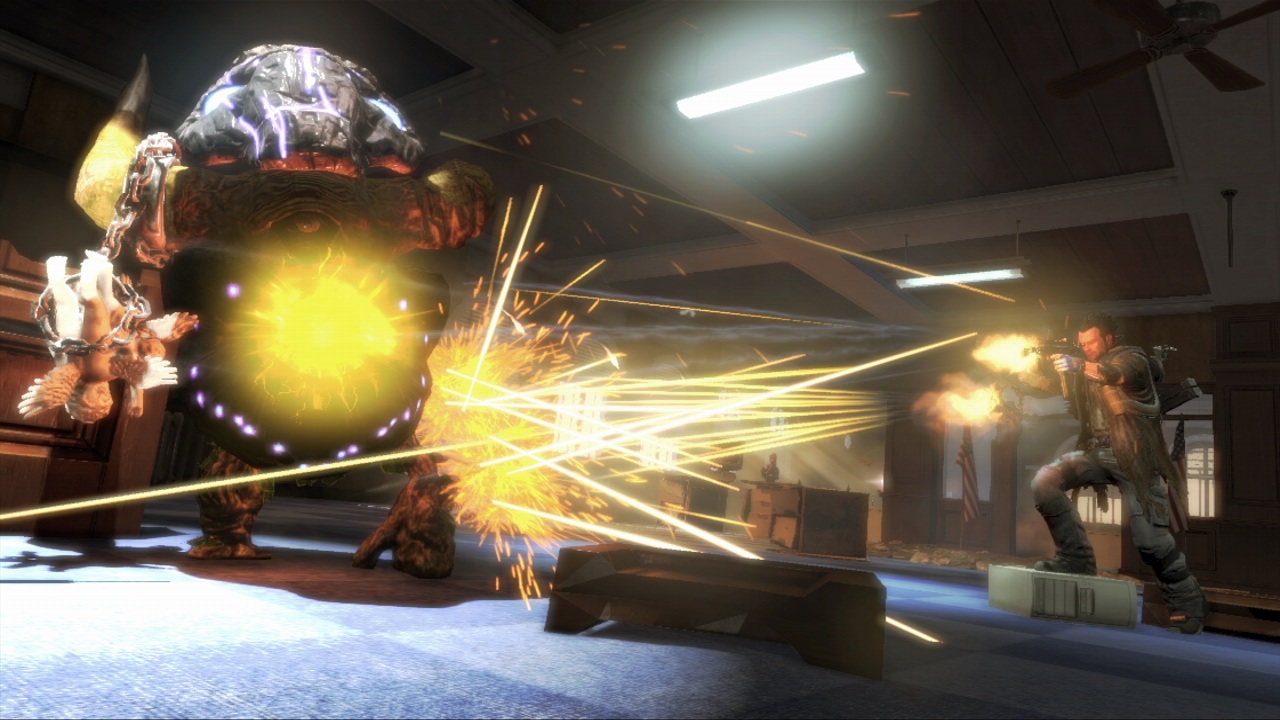 NeverDead takes inspiration from shooter-hack and slash games such as Devil May Cry and Devil May Cry. NeverDead is not a copy of Capcom’s hack and slash series, but it gives an impression that it definitely took some notes when it came to the games themes and ascetics design.

NeverDead is an over-the-shoulder shooter and slasher. The game uses a strange and unique sword mechanic in which the sword’s slashes are controlled by the right analog stick. It’s actually not too bad. There are no combos that rival any other hack and slash game, but it’s an interesting way to handle sword combat. I wish the same could be said with the shooting. It’s traditional third person shooting, but it feels very loose and pointless. After a few hours in the game, my preference leaned toward the sword.

Now I’m sure you know the big gimmick about NeverDead–you play as an immortal who can not die but can become dismembered. How this factors into the gameplay can range from somewhat frustrating to funny. Instead of having a health meter, Bryce simply has a recovery meter for when he breaks apart. You can either guide Bryce’s head toward his other bits or re-grow limbs and even your entire body if need be.

The dismemberment mechanic is OK. It’s not revolutionary by any means, but sometimes leads to some humorous moments. You can’t die, but when rolling around as a head, small round demons can eat you. This brings about a simple timing minigame that leads to an escape or reloading the checkpoint if you fail. There is no actual death for Bryce, just “That was a bad dream “ moments. It’s cheesy like the rest of the game, but it’s better than ignoring the flaw in immortal logic. Since Bryce’s partner, Arcadia is a mere mortal, she can die. I played on Normal difficulty and she rarely got hurt. The instances of her needing a revival were direct results of me hurting her with an environment hazard. Enemies hardly take her down. Play on hard difficulty and you will resent her existence as she gets hurt every 20 seconds. 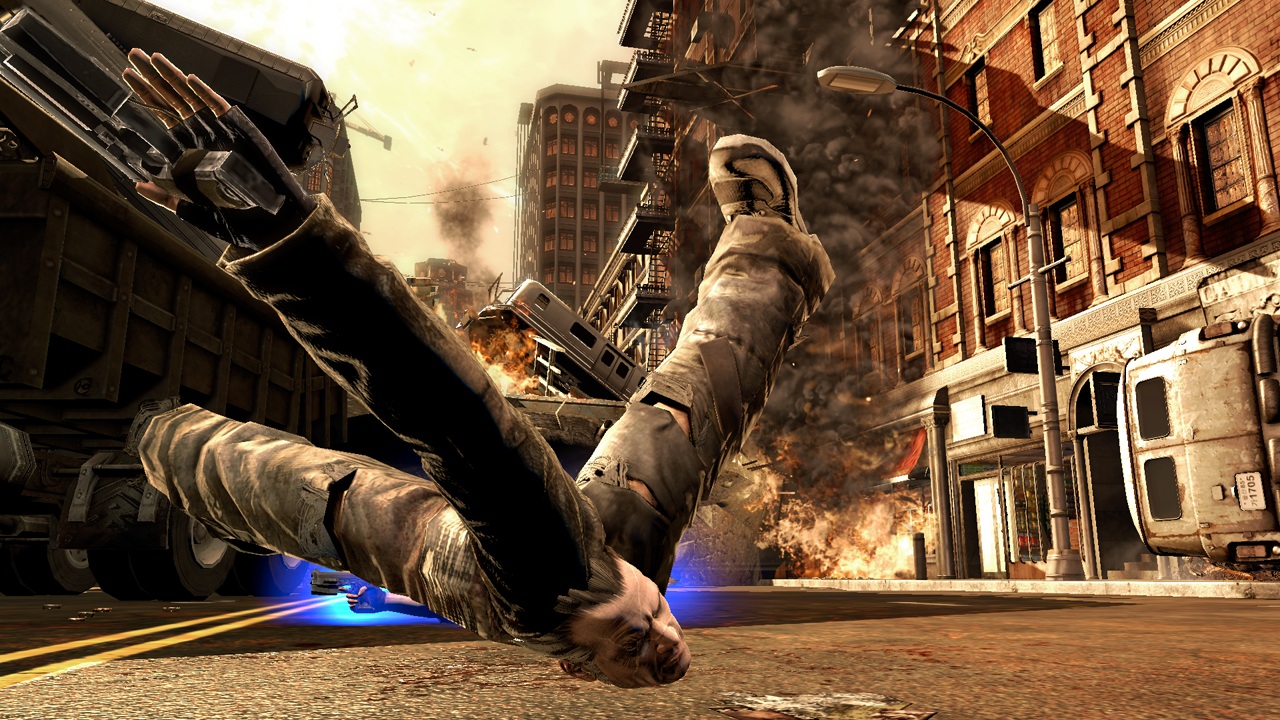 NeverDead is not a hard game, nor is it a long game. What prolongs this title is the immortal aspect. Sometimes Bryce can break apart way too easily and you’re left trying to put him back together again and again. This is especially the case during boss battles. Like I said, they’re not hard at all. Boss encounters are just artificially difficult because Bryce keeps breaking into pieces. If it’s not being dismembered, then it’s a horrible ragdoll incapacitation which makes Bryce fall over like sack of potatoes, repeatedly.

Did I mention cheese? Well, the game is full of it—not the good kind either. NeverDead’s characters are boring, one dimensional, badly written, and plain hard to like. I was originally very interested in the character of Bryce because he seemed like a likable wise cracking demon hunter, but almost all of his lines in the game—as well as everyone else—are cringe worthy. It’s not like Deadly Premonition where the awkwardness is fine-tuned to be brilliant–it’s simply awkward and bad. Not to mention that some lines during mid-gameplay repeat numerous times until you leave an area or pick up a lost body part. There are even instances of the game’s audio cutting itself off by starting dialogue before the previous line is finished.

For some reason the developers decided to give Bryce unlockable abilities that contain points to indicate that they take up a certain amount of space in the equipped abilities window. Only a certain amount of these abilities can be equipped at a time and this leads to an unfulfilling leveling system that keeps potential fun out of hands. The amount of abilities that can be equipped can be extended but I had to finish the game to unlock a reasonable amount. Like most of the game, the ability system is flawed. 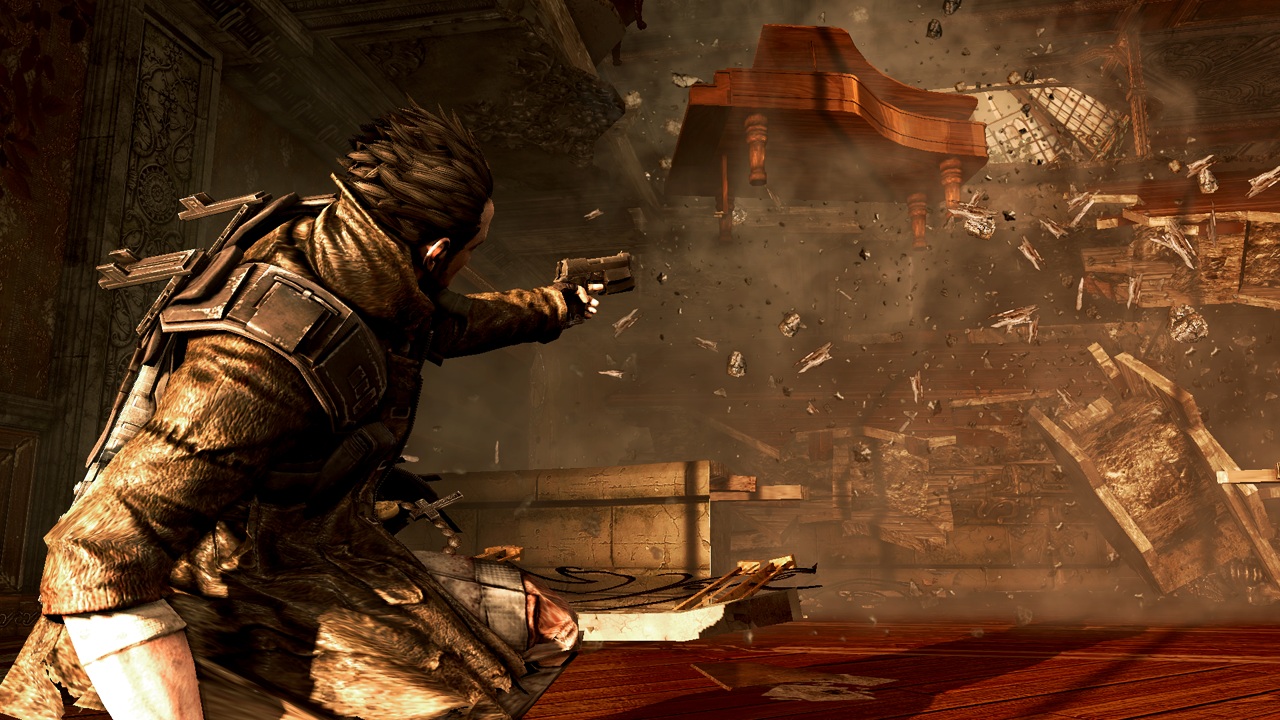 Along with Bryce, NeverDead’s environments are very destructible. Shooting or kicking a wall leads to it literally exploding at you. The environment is meant to be used as a tool for combat: shoot a wall and the debris hurts an enemy. But it’s so sensitive that a simple firefight in a hallway ends up being ridiculous. It can be fun at times—especially with the slow-motion ability—but it’s so over the top that it doesn’t make sense. It’s like the developers were trying to impress people in 2012 with destructible environments. It’s excessive and only useful once in a awhile. Although, it’s pretty funny watching walls explode when in slow-motion.

NeverDead has an online aspect. I originally had no idea it did until I popped it in to play. In so many words, it’s terrible. It’s such an afterthought. It’s a vapid attempt at trying to keep the game interesting. I tried to play online on numerous occasions and only met four other people. After a few matches, I gave up. It’s nothing to care about. 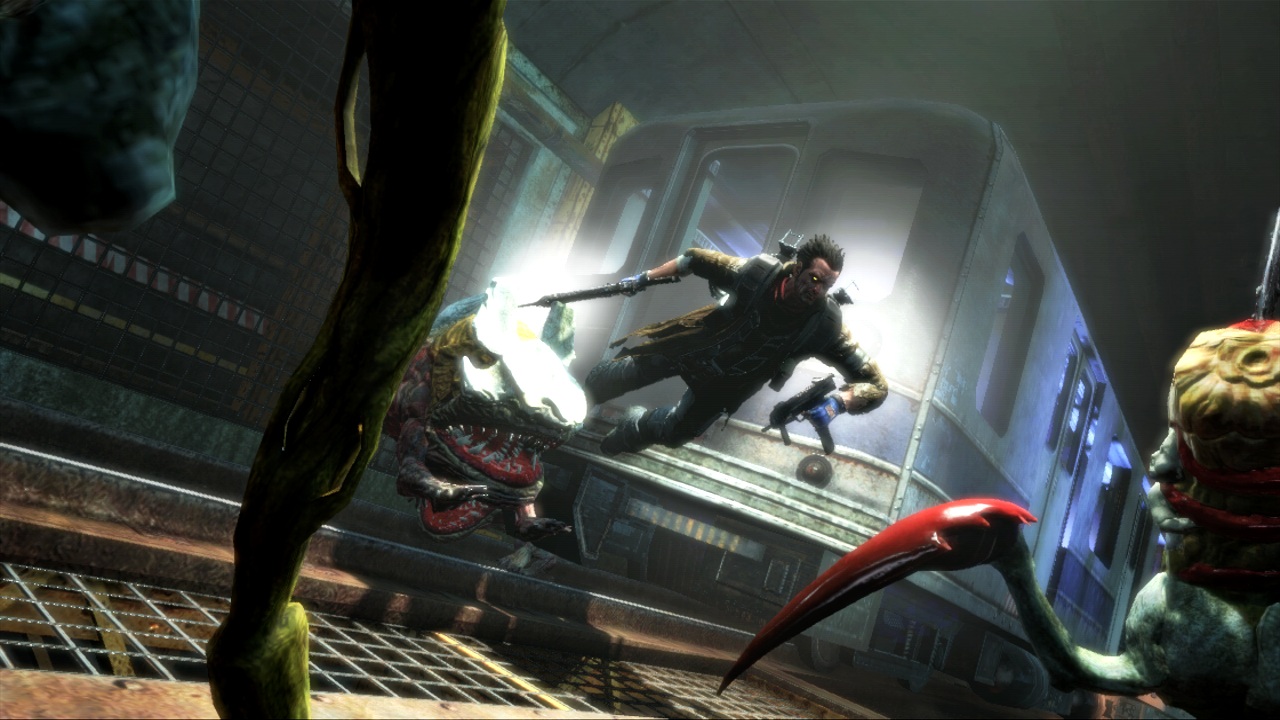 It seems like the entire game would have been more relevant if it were released in 2006 when fancy effects and features still impressed people. I could easily see NeverDead having been a decent experience back then, but to release in 2012 as is, it feels dated and mediocre. The music is terrible; the basic mechanics are unbalanced and broken; multiplayer is abysmal; Puppies have to be the worst starter enemy type ever; and lastly, the main cast is not likeable at all. Despite all of its flaws, I did have some fun with the game. The action is repetitive but can be fun if played in bursts. But even so, this game is a budget buy or rent. NeverDead is not an experience worth full price.

What little entertainment comes out of NeverDead stems from nothing more than a few hours of semi-mindless shooting and breaking things. Perhaps even the occasional giggle when Bryce’s head gets knocked off in a funny way. NeverDead’s time is not today. It arrived a few years too late for its flaws to be overlooked.