With the release of Resident Evil 5 many fans thought the possibility of horror returning to the series would be as likely as Raccoon City coming back. It seemed as if the franchise would be strictly going down an action-heavy route for all its future exploits, until Resident Evil: Revelations was announced for the Nintendo 3DS.

The second exclusive Resident Evil title for Nintendo’s glasses-free 3D handheld aims to bring back the series’ cherished survival horror roots albeit with Resident Evil 4 and 5’s gameplay mechanics. The demo I got hands-on time with featured Jill Valentine as she was trying to pinpoint Chris’ location aboard a luxury cruise ship. She wakes up to find herself in what seems like an all-too familiar mansion. And before you ask, yes, the classic Spencer Estate main hall is replicated here, though it isn’t the one seen in the game’s first trailer. 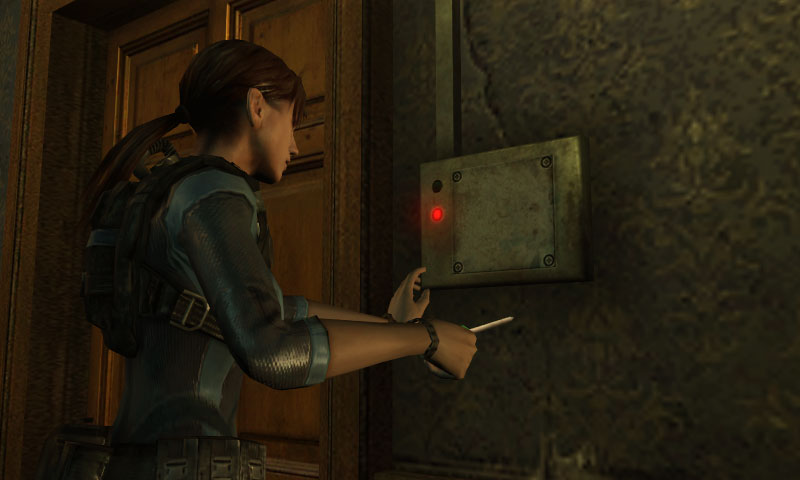 But before getting to this beautiful recreation of that classic main hall, I have to tell you about a puzzle I was faced with moments after Jill woke up. She receives a call from her partner, Parker Luciani, who is a new character and member of the BSAA making his debut in Revelations (and who also happens to look like a mix between Chris and Billy, but that’s probably just a coincidence). Right away I was given the details of this mission: find Chris aboard this luxury cruise ship where his last transmission was emitted from.

So, after some exploring of the demo’s opening room, I found a screw driver needed to unlock a panel to open the door because, sadly, Jill didn’t have a lockpick on hand. And right when I was about to access the panel needed to unlock the door, the game’s new form of BOW burst out of a nearby closet to attack me. I played the demo multiple times but rest assured the first time I was met with this new enemy I was quite startled by his sudden and abrupt appearance. I quickly turned him to a puddle, though, with Jill’s default handgun. But, wait, a puddle? Yes, let me explain. 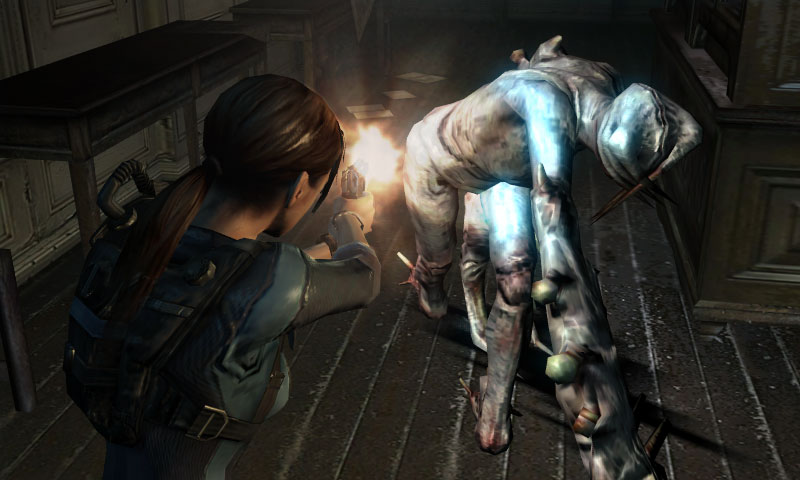 While we’ve already seen a zombie  featured in the game’s debut trailer, the enemy featured in the E3 demo was the now-familiar regenerator/iron maiden (minus the spikes) looking enemies. I asked a Capcom representative if there was an official name for these guys and I was told that there isn’t yet but that these enemies are new water-based BOW’s created by a new type of virus that we’ll be learning more about in the months to come. These guys take more hits than your typical zombies as well so avoiding them altogether wouldn’t be a bad idea, especially since you have to keep a close eye on your ammunition. Yes, ammo conservation is back.

After killing the first enemy I went on to access the panel which lead to a puzzle which took up the bottom screen. With the screw driver you’re able to simply tap and hold your finger/stylus over each of the four screws on each corner of the panel. This will remove the screws, giving you access to unlocking the door. This is where it got a bit tricky. The puzzle I was met with seemed pretty clear at first, just line up the wires so they all touch specific glowing orbs to unlock the door, but it turned out to be not that easy as you had to make sure the wires were all touching the indicated orbs in a specific formation. I eventually figured it out and was really glad that puzzles were once again going to be featured prominently in a Resident Evil game. 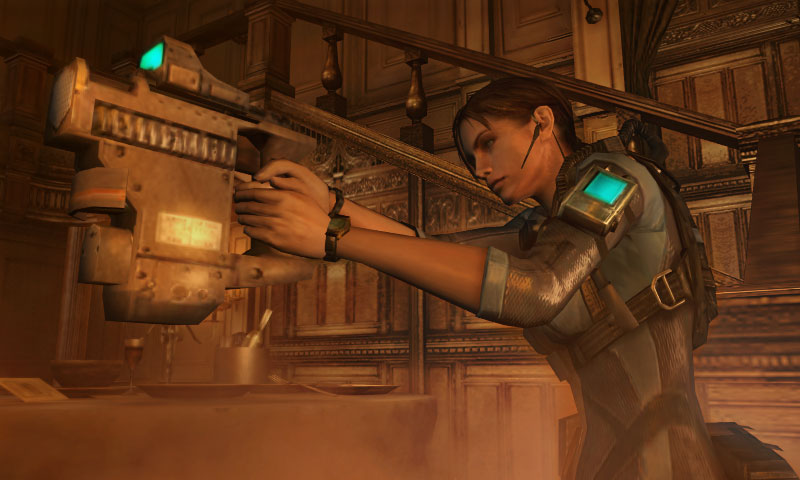 Soon after, I was met with a few more enemies and eventually, after going through many confining corridors, I obtained a shotgun. I made shortly made my way to the aforementioned reimagining of the Spencer Estate main hall. It’s worth noting how ammunition for both the handgun and shotgun was extremely scarce throughout the demo and would be even more so if it wasn’t for a certain new item that’s introduced to the series, which allows you to find hidden ammo and other items, as well as scan enemies for weak points. That new device is an item scanner which complements the first person shooting mechanics (aiming your gun switches the perspective to first person) featured in the game which does, in fact, allow you to move and shoot at the same time, albeit slightly.

After obtaining the item scanner I started to backtrack my way back to the room Jill first wakes up in, where the demo had started. Why backtrack? Well, the item scanner does exactly as you would imagine, it lets you scan your surroundings in first person to see if there are any secret items scattered around. After scanning the spot where the item is hidden you’ll then be able to pick it up. In the demo, these hidden items just consisted of ammunition for both the handgun and shotgun. I’m really excited about this new addition to the Resident Evil formula as I feel it’ll add an even greater layer of immersion which could be incorporated into puzzles and whatnot. And before you say it, or think it, yes, Jill has taken a page from Samus’ book in Revelations with this new device. 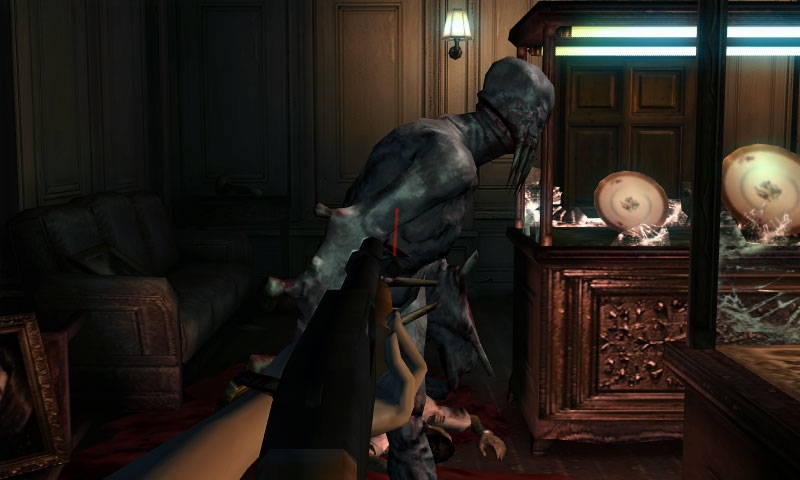 After going through several more rooms I was met with a variant of the new water-based BOW, one that was bigger in stature and had a pulsing upper body that looked like it was ready to explode. These guys took a bit more hits and were definitely more powerful, using grenades would be wise against these foes but you can still opt to just shoot at them. While the moving-and-shooting feature is in Revelations like it is in Mercenaries 3D, I personally didn’t opt to move around while shooting, I was just playing the classic way: standing in a good spot and taking aim, with the occasional zig-zag running technique to get through the enemies to continue shooting at them from the opposite end. It all worked and proved to be extremely fun and even tense in some spots.

The playable demo then concluded once Jill was reunited with Parker and shortly after heading into one of the ship’s control centers, a cutscene was initiated. Jill and Parker’s only way out of the cruise ship, which was a smaller boat, was destroyed and I was introduced to yet another brand new character, who at this point is unnamed. Yeah, it was a cliffhanger ending and during a chat I had with a Capcom rep I was told that we would be learning who this character is and what connections he has in the coming months. But wait, the playable demo may have ended but I still got a look at another part of the game in action behind closed doors. 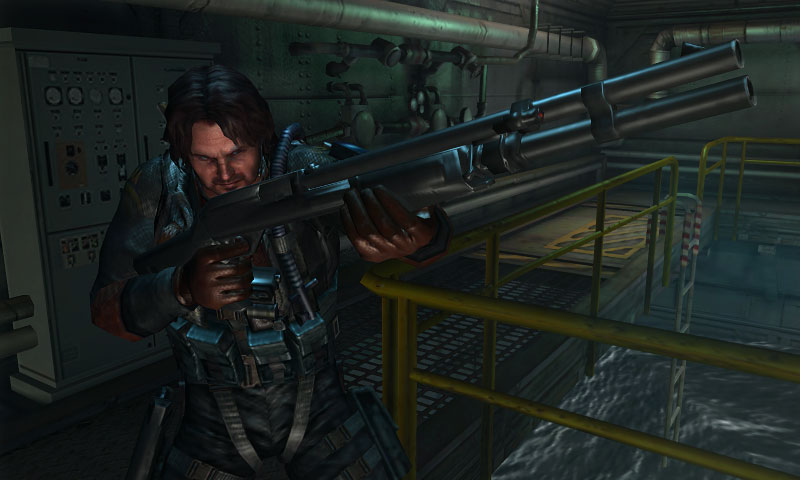 Sadly footage wasn’t permitted so hopefully this is enough for you to visualize just how the underwater gameplay works, which is what this gameplay footage showed off. First off, Parker will be a playable character in the game, squashing any assumptions that you’ll only be able to play as Jill due to all the media released thus far focusing on her. Parker was shown swimming through underwater corridors as he was desperately trying to get some air. This was made even more troublesome to do because of underwater BOW’s that populated the level. These were different than the enemies showcased in the playable demo and they looked like very vicious sea creatures (you can already tell water plays a very important role in this game).

As Parker was confronted by enemies he was seen shooting at them underwater and also using a new type of explosive. Parker threw a pulse grenade that exploded and set off strong sound waves that greatly inflicted damage to the sea creatures. As I was watching the presentation I couldn’t help but be quite excited at all the possibilities these underwater scenarios can bring to the player. Just imagine how tense puzzles can get knowing that you’re also racing against the clock trying to stay alive underwater. The presentation concluded with Park making it out of the deadly waters and being contacted by none other than Chris Redfield. Parker quickly filled Chris in on what had been going on, telling him that he shouldn’t try to board the luxury cruise ship. And the demo ended, leaving many questions unanswered and open to heavy speculation. If Chris was in Europe the whole time with Jessica (another new BSAA member), then who’s the Chris that was seen in early screens and in the first trailer along with Jill? I’ll be tackling that very question soon.

Overall, I was extremely pleased with Resident Evil: Revelations. So much so that I actually played through the demo multiple times, with the best experience being in a private area in Capcom’s booth where I was free to play the demo without obscene amounts of noise all while chatting with Capcom reps about the game. Horror game of the show? Damn right it is. Welcome back to the world of survival horror.