Horror by the books

So, it’s Thursday again, which means it’s going to be another week until the new chapter of Resident Evil: Unlimited is released. Sad, I know, but it takes a little while to get all five pages done. But fret not, there’s still lots of interesting comic book related things I can share with you.

As I’ve been working on the comic, I’ve learned a lot of interesting things about Resident Evil, both about the series’ deep history, but also about the creation of the series as a whole. Of course, Unlimited is far from being the first Resident Evil comic, so I decided to do some research into what has been done with the series in this medium before. Turns out, quite a bit! Resident Evil has had about five separate comic series, both in the states, and in Japan. Some of them are a little hard to find information on, and others are impossible, so bare with me here.

(WARNING: SPOILERS! IF YOU AREN’T FAMILIAR WITH RESIDENT EVIL, THESE COMICS GAVE AWAY LOTS OF MAJOR PLOT TWISTS AND SO FORTH. PROCEED WITH CAUTION) 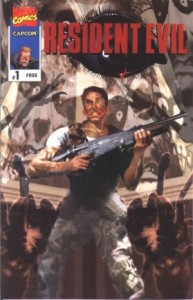 The very first Resident Evil comic book was published in April 1996 as a free pre-order bonus with the game by Marvel comics. The comic served as a prequel to the original game’s story, and offered up lots of information about the characters and back-story that wouldn’t be in the games until much later in the series (for instance, the comic references the death of Edward Dewy, who was never mentioned in the original Resident Evil, and would never even be heard of by name again until the unreleased Nintendo 64 version of Resident Evil 0). The comic starts off with Richard Aiken attempting to contact the R.P.D. via his radio, but ends up being chased through the mansion by zombies, and visiting some familiar RE1 locals, like the armor gallery, and accidentally sets off the poison gas trap (which in the original game involved a very simple pushing puzzle, and has since been replaced by a significantly more complicated one in the REmake on the GameCube.)

The comic goes on to show Richard’s encounter with Yawn, the giant snake, which results in his eventual death (Richard’s character was very light in the original game, with him only serving as a way to acquire a radio in Jill’s game. He is already dead in Chris’ scenario, and it stayed that way until Resident Evil: Director’s Cut a year later). The comic also explores Albert Wesker’s connection to the Bravo Team’s helicopter crash, and his plans for S.T.A.R.S. (which I think is pretty crummy, since Wesker’s betrayal is a twist at the very end of the game. Sure, everyone saw it coming, but it’s still pretty crummy). It also shows the R.P.D. building, but as the building wouldn’t be designed until the final version of Resident Evil 2 nearly three years later, the version in the comic book is just a generic police station. It also explores the S.T.A.R.S. Alpha Team’s doings before the events of Resident Evil 1, showing that they apparently slept at the station (don’t these people have homes?). The comic seems to have inspired S.D. Perry’s novel “The Umbrella Conspiracy”, in terms of the briefing Wesker gives Alpha Team and Jill talking with Barry about her misgivings. I find this interesting, since S.D. Perry’s novel wouldn’t be published until after Resident Evil 2 was released. 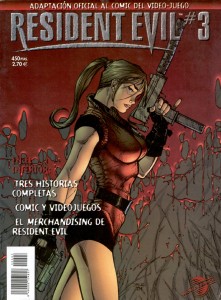 Next up is the Resident Evil: Official Comics Magazine, which was published by Wild Storm Comics just after Resident Evil 2 was released in the US. The first issue served as sort of a bridge between Resident Evils 1 and 2. Each issue featured a handful of stories inspired by the Resident Evil universe, some taking it more seriously than others. The opening story shows Albert Wesker on the phone with Umbrella HQ, explaining each member of S.T.A.R.S. and what their specialties are (This was very interesting for Resident Evil fans, as a pretty good chunk of RE1’s cast was unseen, or at least not in detail. It showcased Richard, Kenneth, Forest and several other characters who previously where faceless, more or less).

The comic also shows John Toleman, Ada Wong’s otherwise completely unseen boyfriend, and tells the story of how he was infected, the puzzle involving the Adam and Eve painting, and shows him writing his letter to Ada as he turns.

Other stories go between interesting and strange, including a story where Jill fights a Werewolf (?) prior to Resident Evil 1’s events (??), a story where Jill and Chris discuss the events of Resident Evil 1, and poke fun at the fact that they experienced the same events so differently (Chris comments on how he found Jill locked in the cell at the end of the game, and Jill disputes this with him, claiming she found him in the cell). 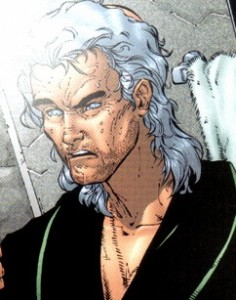 It also contains a very cool story about how the virus leaked into Raccoon City, and even shows the events that led up to how the fuel truck driver from Resident Evil 2s opening cinema was bitten! It’s important to note, however, that this comic was created before much of Resident Evil’s canon was set in stone, so the creators of the comic took lots of liberties crafting the story (even going as far as to say that the outbreak in Raccoon City was caused by a vial of T-Virus that was flung into the Circular River when the Spencer Estate detonated at the end of Resident Evil. This is actually a little odd, since the outbreak in Raccoon City is very clearly explained in Resident Evil 2). 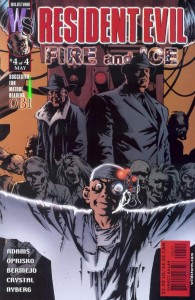 The next Resident Evil mini-series didn’t come out until 2000, coinciding with the release of CODE: Veronica on the Sega Dreamcast. Resident Evil: Fire and Ice is a completely non-canon comic that follows a third S.T.A.R.S. team, Charlie Team. Charlie Team may have been created under the premise of S.T.A.R.S. from the S.D. Perry novels, where the organization is global as opposed to being a local division of the R.P.D. as it is in the games (which is the only way to explain this team’s existence). The comic has numerous strange problems with continuity, and the writers where very apathetic with researching the series. Most of the comic’s ties to the game are wrong, even down to the zombies themselves (who are smart enough not only to use weapons, like axes and swords, put to pull off their own limbs and hurl them at the characters).

The story arc was only four issues long, and was collected nine years later by Dark Horse comics, who also included sections of the Official Comics Magazine from 1998 in the book as well. 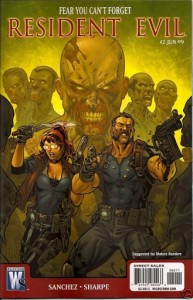 The most recent comic book is simply titled “Resident Evil”, and was designed as a prequel to Resident Evil 5, following a division of the B.S.A.A. unrelated to Chris and Sheva. It’s not entirely clear just how canon this comic is (Probably not at all, based on the previous comics), and features many old Resident Evil monsters, such as Lickers, Hunters and G-Virus infected zombies. Early adds mentioned Chris Redfield, and his journey to Africa, but he never ended up appearing in the comic at all. Instead it ends up following the hilariously named Holiday Sugarman. The comic is actually pretty cool, despite how weird (and kind of silly) it gets (ZOMBIES IN SPACE. I KID YOU NOT.)

Of course, Japan gets everything cool. In 1999, an official manga based on Resident Evil 3, or as it’s called in Japan (or Nippon, I guess, since I’m getting technical), Bio Hazard 3: The Last Escape. It’s a fairly decent adaptation of RE3, and even tries to work in a little more story (for instance, detailing Nemesis’ back-story (An actually pretty tragic tale of a pro-boxer who has debt, and is forced by Umbrella to sell himself as a test subject to keep his family safe- and Nemesis has recurring memories that it is trying to fight off throughout the story. It’s possible that this was an inspiration on the movie version) and on it’s creation, and how Nemesis got his characteristic staple-scar.

What’s also really cool is how the manga works Resident Evil 2’s story in, and eventually culminates into NEMESIS fighting Mr. X, which is- and you can quote me on this- the greatest anything ever. 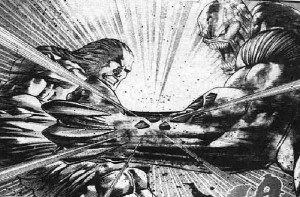 Sadly, this manga never made it to the States, and the only translations are done by fans.

And last, but not least, is the Resident Evil- Code: Veronicamanga adaptation, which was eventually brought Stateside. Although it gets a little off-rails at certain points (Steve shoots a zombified Claire, and then learns that he is apparently insane? I guess, they never really touch back on it). Unfortunately, this manga was made BEFORE the Director’s Cut version (CVX), and my favorite cut scene (Chris and Wesker’s fight at the end of the game) isn’t included in the manga. 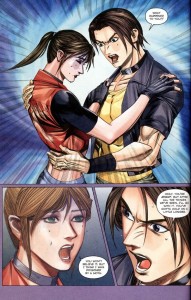 Well, there you have it folks! A complete list of every Resident Evil comic ever made (officially). I had a lot of fun researching it, and I urge you to pester Capcom about bringing that RE3 manga to the states on the Capcom-Unity forums! And, finally, here’s a little piece of what’s in store for you next Thursday, with Resident Evil: Unlimited Chapter 1-2: Insanity!

Thanks for reading everyone! And special thanks to Biohaze, Resident Evil Wikia, and the Marvel database for the information and pictures!