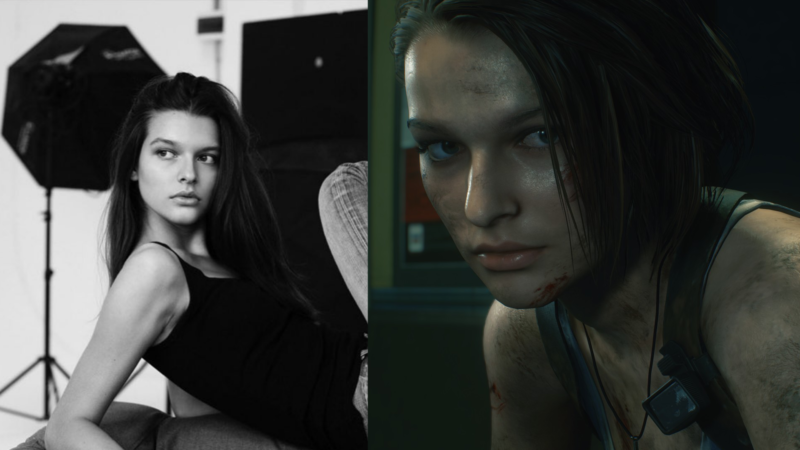 When the original Resident Evil 3 Remake leak occurred on December 3rd, there was kind of a scramble from fans to figure out who Jill’s photogrammetry (a process used to accurately scan people and objects to create near-photo realistic in-game models) face model was. Many, including our editor-in-chief CJ, speculated that it was Tokyo-based model Jane Shishlyannikova (thanks in part to a Twitter account that appeared to be operated by her). Turned out the Twitter account was fake, and Shishlyannikova didn’t appreciate fans inundating her with messages. That said, it would appear that the real Jill Valentine has stood up (of course, take with a pinch of salt simply due to Capcom not having actually announced anything at the moment regarding the cast), as Russian model Sasha Zotova confirmed t on her official Instagram that she was indeed the new Resident Evil 3 Remake model. 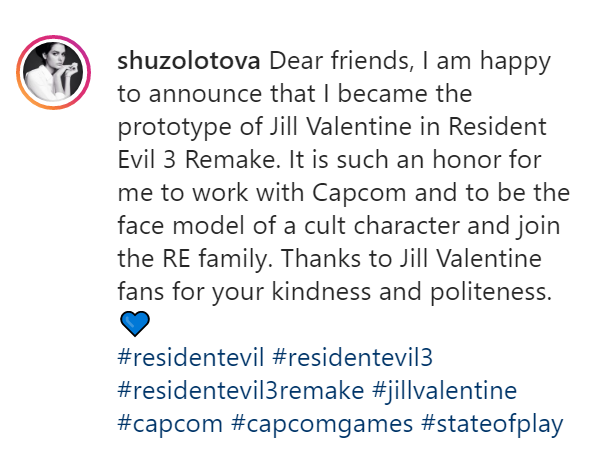 Looking through her pictures, it seems pretty obvious (although Shishlyannikova looked very similar as well) that she is indeed Neu-Jill. While we’ll always love (and miss) REmake/The Umbrella Chronicles/RE5 model Julia Voth, Zotova looks great for capturing RE3‘s Jill. Jill’s face has changed multiple times over the course of the series, of course — much like any other character about the only thing that stayed consistent was her hair (until post-RE3 timeline entries where she wore her hair in a ponytail). It’ll be interesting to see how long Zotova remains Jill’s look, or indeed any of the new models. So far each has only had the chance to portray their character once, and given the tremendous gap in time between these remakes and the time the modern games are set it might not be an option to try and simply age up these young models. The only one that plays the modern-day version of a character is Geordie Dandy, who was Resident Evil 7‘s Chris Redfield. In theory, they’ll be going with him in future games (unless the #NotMyRedfield people scared them off, which is a bit silly). Only time will tell, we don’t even know if RE8 will be bringing back a legacy character or going with a new hero ala RE7‘s Ethan.

In the meantime, we still don’t even know who the voice cast for Resident Evil 3 Remake is. Presumably, none of them are previous voices from the series reprising their roles, just like REmake 2. The only members of the cast who are still portraying their roles (although several of them are themselves replacements for other performers) are D.C. Douglas (Albert Wesker), T.J. Rotolo (William Birkin) and Keith Silverstein (HUNK), who all started with 2007’s The Umbrella Chronicles (and Rotolo and Silverstein reprise their roles in REmake 2). Of all of them, I’m most curious to hear more from Carlos, who’s voice acting has been… kinda all over the place (not to mention after the original RE3 failed so badly at giving him an accent they just haven’t bothered since). We already know what Nemesis sounds like so the most important bit is taken care of, at least.