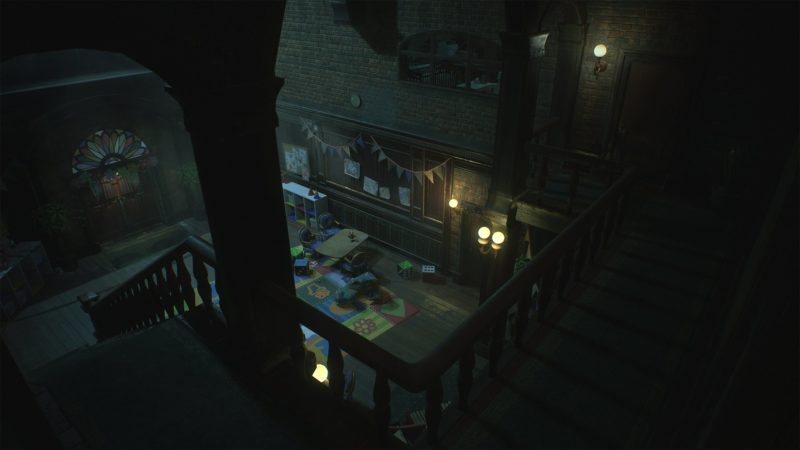 We’ve entered the final stretch for RE2 Remake, now slightly less than two months away. As such, Capcom is starting to delve into the meat of the game, showing off new gameplay, combat, mechanics, and environments. We also get first looks at Sherry and Ada gameplay, as well as the introduction of Robert Kendo!

The first new video showcases Claire as she attempts to explore the RPD building while being stalked by the indestructible Mr. X, aka Tyrant model T-003. Mr. X is a force to be reckoned with, now capable of following the player room to room (he was unable to follow past a closed door save for one very specific instance in the original RE2) and even into areas he previously didn’t have access (like the heliport). This manufactured hunter/killer appears to be able to show up whenever he feels like, as a Terminatoresque tune announces his entrance into the fray. By and large, Mr. X appears mechanically the same — sweeping melee attacks that can knock the player back or on their ass. He also has a new grab action that (possibly, according to the ESRB) may lead to our ol’ noggin getting stress-balled if we don’t have a defense item at the ready.

It’s interesting to note Mr. X chasing Claire, as that was something exclusive to the B scenario in the original game — and canonically up until now, Leon was the one who faced off against Mr. X. Of course, we already have confirmation that Claire will be fighting G as well, but it’s interesting to see how different things really are going to be. Speaking of different, the video ends with Claire getting an ominous phone call from the deranged Brian Irons, chief of police turned psychotic murderer and maybe worse (… or maybe he was always like this behind closed doors). As noted in previous reports, Irons will be playing a much larger (and darker) role in this story. It also appears that, after kidnapping Sherry at the end of the first Claire demo we saw, he’s dropped her off at a local orphanage, where we will be playing as Sherry in order to escape. This leads even further credence to the idea of zombified children; something trailers have been teasing since the E3 announcement.

Next up, we see the events of Leon’s perspective in a second trailer, as him and Ada Wong… leave the RPD building in search of answers regarding what caused the outbreak. Much like Sherry’s trip to the orphanage, this is a massive deviation from the original game. Apparently, after reporter Ben Bertolucci wasn’t able to cough up the information Ada needed (could he already be dead by the time we find him now?), we’ve braved the streets in search of more. Interestingly, we now visit Kendo’s Gunshop after the RPD station now and run into a much more terrified and aggressive Robert Kendo. Holding a shotgun to Leon’s head, it looks like he isn’t taking any chances as he did after lowering his weapon almost immediately in the original game. Worth noting part of the reason could be that seeing Leon in RPD blue is what’s got him so on edge — Kendo was intimately familiar with the RPD, and wouldn’t have recognized fresh out of the academy Leon, meaning that (in his eyes), Leon could have murdered an officer and stolen the gear.

Next, we see new gameplay of Ada Wong, sans her shades and coat. Her new look is sleek and stylish, feeling a little more classy than her original clubbin’ dress. Ada also appears to be using some Waynetech fresh off the streets of Batman: Arkham Knight — a weird little flashlight thing that appears to be able to not only highlight wiring and circuit systems behind concrete but also deliver an overload causing a controlled explosion when need be (bypassing a vent that required a valve crank in the original RE2). Then we transition back over to Leon after he’s been shot by Annette Birkin while trying to shield Ada. Unlike the original RE2, where Leon simply got bandaged up, we can now see that the wrappings themselves are taken from Leon’s white undershirt (something assumed to be the case in S.D. Perry’s novelization, City of the Dead), leaving him sleeveless. It’s actually pretty cool looking.

Leon explores the dank, disgusting Raccoon sewer system, which appears much larger and more claustrophobic than before. Facing his fears, Leon encounters the massive G-creature, the unholy offspring of G Birkin’s hunt for a biological mate to spawn further beasts. In the original game, this thing was birthed from G infesting either Brian Irons (Claire A) or Ben Bertolucci (Leon A) with a parasite that would gestate and burst out like a xenomorph, but the sky’s the limit on who could be this thing’s new mommy now. The G-Creature is simply stomach churning to behold, with clear John Carpenter’s The Thing influence bringing the mutated blob of meat to life like never before (having been shown in the original RE2 as well as The Darkside Chronicles). We see a much more involved boss fight, although still retaining the core ideas of it (most horrifyingly the G-Young that it pukes out). The boss fight at least partially takes place in a submerged section of the sewer, leading to some Star Wars Trash monster vibes.

Several media outlets have gotten their hands on RE2 Remake as well, with even more footage to show. GameSpot shows off a considerable amount of combat, with some seriously exciting descriptions of how things work. Likening Lickers (which apparently litter the RPD building, as opposed to being a handful of encounters like before) to Jurassic Park’s hyper-intelligent Raptors, and Mr. X to the unnamed creature from It Follows (in that he cannot be stopped and apparently will follow you indefinitely, unlike the handful of scripted appearances in the original game). We also get to see that Ada will be facing off against Mr. X as well, which is something that never happened in the original game either.

There are other gameplay videos as well from other (non-English speaking) news outlets, with their own highlighted gameplay moments. We can see the upgraded Matilda handgun, the shotgun parts for the improved shotgun, and more. I’m super excited for a section in the German-language Inside PlayStation video that shows Leon finding the dead USS soldiers (HUNK’s team) in the sewers and picking up a VHS tape from one of them. While I desperately hope it’s a playable section of the game, ala RE7, odds are it’s closer to Kenneth’s tape in REmake — just a short video we can watch. I’ve collected them all here for you, so watch away! I know I’m going to be spending much of today pouring over them for new information.