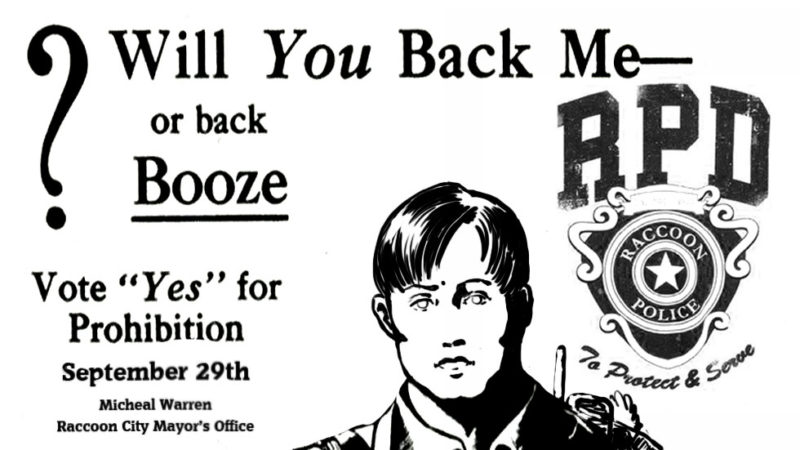 RE2 Remake has clearly been unafraid to make wide sweeping changes to lore thus far, as we’ve seen many story elements pan out in different or even elongated ways. Chief Irons’ role has been amplified, Ada Wong is now completely up-front about being a secret agent (just not who she’s actually working for), and Marvin is now a full-fledged partner, helping Leon and Claire explore the RPD over the radio. One thing fans have suspected as well is that Leon’s backstory would be changing slightly, after an off-hand comment from Leon during the first gameplay demo at E3.

In the original canon of RE2, Leon Kennedy was set to arrive in Raccoon City on September 28th, but after his girlfriend broke up with him, he got blackout drunk and slept in until almost midnight. Getting on the road and arriving just after midnight on the 29th, Leon found that his broken heart had, in fact, saved his life, as he would have otherwise surely been killed trying to defend the RPD from the zombie hoards. While this didn’t make Leon look like the most professional guy in the world, it helped explain his mindset (immediately glomming onto Ada, and feeling guilty for not having arrived sooner) and made his journey from idiot rookie to suave secret agent over the course of the series that much more compelling. Well, that’s changing with RE2 Remake to make Leon seem a little less unprofessional.

Using Twitter’s built-in translator (and some attempts to iron out the Engrish on my end), the text reads:

[Leon S. Kennedy] A rookie police officer assigned to the Raccoon City police station. “I was waiting at home with an order just before the appointment date, but since then there has been no contact. I am suspicious and going to the station”. Arriving in Raccoon City several days late will change his fate.

So we heard during the RE2 Remake E3 gameplay demo that Leon actually received a call to stay away, and after a few days of waiting for more information, he decided to head out anyway. I imagine there are a few reasons for this, chief among them casting Leon in a better light (although at least not as ham-fisted as the Western localizers deciding Chris shouldn’t smoke in an M-rated game). Another reason for this could be to fix a continuity hole with Leon arriving only a day late. The Raccoon City outbreak started on September 23rd with smaller-scale attacks and devolved into full-blown panic by the 24th. The RPD attempted to hold the line but ultimately fell, and by the 28th (the day Leon was supposed to arrive) everyone was already dead. So this synchs up everyone and everything with how the timeline has come to be now, as games like Resident Evil: Outbreak and Operation Raccoon City have fleshed out certain aspects of the city’s death (and yes, while the actions of the USS WolfPack team are non-canon, there’s actually a surprising amount of effort put into the rest of ORC to make it match up with the series timeline despite them having free range with it being a what if story).

Re-writing (RE-writing?) backstories is nothing new for this series, as the original REmake fleshed out Jill Valentine and the S.T.A.R.S. team as a whole significantly from their original 1996 versions (which had bizarre descriptions of their placement in the unit). In fact, the idea of S.T.A.R.S. being a special unit put in operation by the RPD didn’t come until much later, as the instruction manual indicates that S.T.A.R.S. is a government operation and that Raccoon City is simply where the team had been assigned (a plot thread even used in the S.D. Perry novelizations, which shows Alpha and Bravo teams being part of a much larger organization, and Rebecca going on to work with other, made up members of S.T.A.R.S. from Maine). So Leon getting a more streamlined, lore fitting backstory does make sense, even if it does ruin some of the “herp derp Leon the drunk boi” fun.

Much more than that will probably be changing when we finally get our hands on RE2 Remake January 25th, so stay tuned. I wouldn’t mind actually doing a lore comparison when all is said and done, sounds like fun.