RE2 Remake: Cheesy Dialogue, Over the Shoulder, and Leon's Hair - Rely on Horror

RE2 Remake: Cheesy Dialogue, Over the Shoulder, and Leon’s Hair 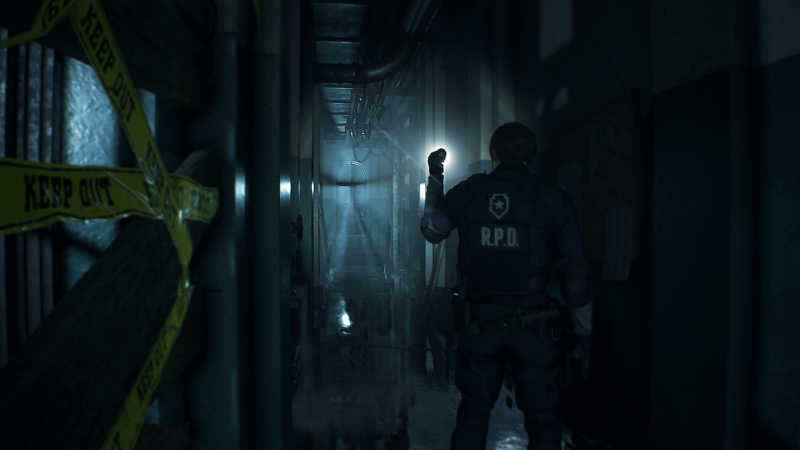 The RE2 Remake news pretty much just doesn’t stop, does it?

During an interview with Metro Gaming, producer Tsuyoshi Kanda and director Kazunori Kadoi answered some more questions regarding the upcoming remake and how much work they’ve put into retaining the feel of the original while also pushing it to become a whole new experience to terrify both new and old generations. The interviewer, David Jenkins, seems to be on the perfect wavelength for the interview and we’ve got some great, and long answers regarding a few elements of the game.

One of the things that I’d been curious about in my last news post regarding REmake 2 was how much of the “cheesiness” would be remaining intact. While RE2 was never… quite as bad as the original Resident Evil, it was still on sort of a B level in terms of delivery and storytelling, with many moments (despite the intention to make a serious, gritty horror story) coming off a little funny due to translation and localization. Resident Evil has since somewhat embraced the goofier side of itself, with games like Resident Evil 4 and 7 just being downright funny in places, but REmake 2 seemed to be completely doing away with that side of the series. When asked if that was the case, Kazunori Kadoi replied:

We don’t want to have unintentional cheesiness that is actually not good. Like, I think it’s become a beloved aspect of the older games, because at the time having a story at all was great and having recorded dialogue was amazing. So you forgave it some sins because it was just unlike anything else out there. And over the years that cheesy reputation is actually something, in the West, that people like about the games. We certainly want to have humor but we only want it if it’s intentional. We don’t want people to be laughing at dialogue that’s supposed to be really serious, you know? So we’re sort of balancing that out a little bit. We are keeping certain key classic lines intact, so some of the quotes people know and love from the game – whether or not they’re cheesy – we’re keeping them as little tentpoles of the script to keep the references of the original game alive. But as for the procedure of developing the script, we work on an outline in Japanese first and then we give that to a Western writer. And then they create the fully-fledged screenplay, so to speak, in English. So the lines themselves are actually written in English natively this time, based on an outline by our staff.

We don’t necessarily take those lines the same way when they’re written back in Japan. There’s a kind of a gap between the intentions and the, albeit positive, reaction from Western players. There’s always been a gap. Whenever people say to us, ‘We love the cheesy lines!’ we’re always like, ‘What cheesy lines?’ In Japan it’s taken as a Hollywood style game. Because in Japan it was all in English, there was no Japanese voice acting in the original games. It was all subtitled. But the writer we’ve hired, they will have included some references that will keep the fans happy, but we haven’t given specific instructions.

Resident Evil REmake did something similar at the time – not outright keeping cheesy lines, but paying homage to them when appropriate. I can only hope that REmake 2 is able to provide the same balance RE7 pulled off so well between funny and serious. Humor goes extremely well with horror under the right circumstances, and Capcom’s proven themselves adept at juggling both in the past. 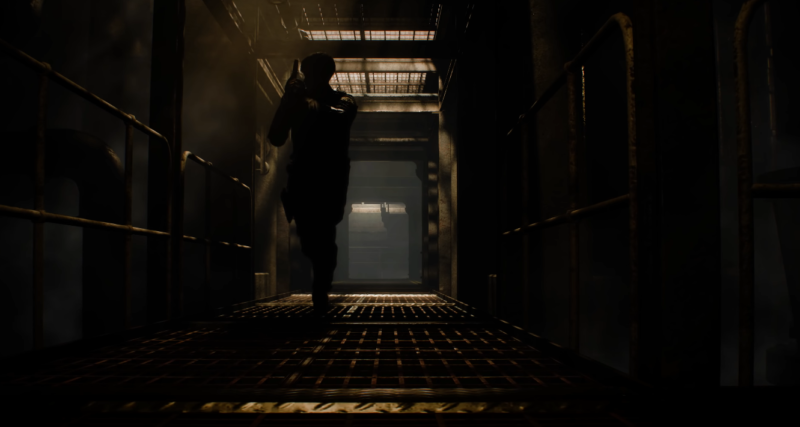 Next up, we have some talk about the way the game plays. RE has created quite a divide with its fanbase over the years, now offering three pretty distinct eras of gameplay between the original trilogy (fixed camera angles), the modern trilogy (RE4-6 with over the shoulder) and now the style of Resident Evil 7 (first person – although RE7 was hardly the first FP RE, it was the first numbered FP in the series). The developers behind REmake 2 have spoken briefly about how and why REmake 2 has chosen to go with the more modern approach. As much as I’d have loved it if REmake 2 went full fixed camera (and I still suspect that it may be a hidden mode, despite how complicated it would be to create), their reasoning isn’t that out there.

We did, at the start of development, consider and do a bit of trial with fixed camera angles versus over-the-shoulder. We developed a little test comparison between the two and looked at how they worked. But the major advantage of the fixed camera angles was in creating a horror atmosphere via the use of specific angle cuts as you moved along. And it was a kind of movie director style approach to creating an atmosphere for each individual scene. But the disadvantage is the controls have to be somewhat different when the camera angle changes. And to deal with that you have to have the tank controls. We looked at both though and realised that actually, the over-the-shoulder camera has the advantage of modernised controls, consistent movement controls, and free-aiming. But it also helps us push the zombies a lot more because we can be right close up and personal with these sort of claustrophobic zombie encounters. Rather than having a camera that’s at a distance in a room they’re actually right up in your face. As scary zombies is one of the key aspects we’re pushing with this game that’s a big advantage. But we also realised that by combining the over-the-shoulder camera with a variety of other game design elements – such as level design, use of shadows, field of vision – we can actually still do lots of great horror tricks and atmospheric things even though we’re not using fixed camera angles. You can’t see what’s around the next corner, and that’s the same whenever you’re in over-the-shoulder anyway. Even when you enter a room, even though in theory you can see everything, the darkness means you might not see what’s in the dark corners and what’s hiding there. So there’s plenty of tricks up our sleeves for horror, even without the classic angles.

It’s interesting to hear them talk specifically about how they’re using the camera and focus anyway, despite the player having direct control over it. I have to admit, zombies have literally never been as terrifying as they appear in REmake 2, and I think a lot of that does have to do with the way the over the shoulder camera works. While in the original RE2, a crowd of zombies was perhaps a little nerve-wracking if you were low on supplies, I can’t say that I ever really felt afraid of them. They were more of an obstacle than anything. Now, even having not played the game myself, even single encounters with zombies feel memorable and packs feel downright terrifying. As much as I love fixed cameras, and miss the old school days of the series, I really can’t help but feel that, setting aside nostalgia goggles and fanboy desires, that this really is the best option they could have gone with to create something truly terrifying. 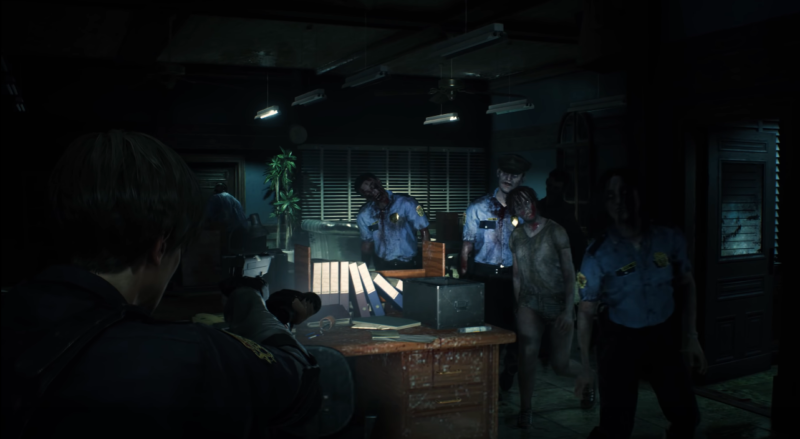 Finally, they talked a bit about how not just photogrammetry, but full motion capture is being used to create the game. I don’t know about you but I’ve been simply floored by the way REmake 2 looks, it’s very easily the best-looking game in the series (which is saying a lot considering how tremendous games in the past have looked). They previously discussed some of this information during their SDCC panel a month or so ago, but they go into a little more detail here.

Our key words for the graphic concepts this time are ‘wetness’ and ‘darkness’. And we’re trying to make it so we have this almost tangible, wet gore that you see on-screen. It isn’t just red-colored gore, it actually feels really realistic and jumps off the screen at you. That realism also comes across in the characters as well. We’ve used photogrammetry to scan models and add that into the game, and then animated them. So I think every aspect of them really leaps off the screen as feeling almost like a movie-like quality. Also, a less visually obvious aspect of the engine is that the way it’s designed is that it really helps us iterate very quickly when we’re developing. So we can put things together very quickly and get them up and running, and see how they look. And we can do a lot of process of trial and error because it isn’t taking a lot of time to commit to things. And that really helps us to work towards getting the kind of visuals you want to express.

Mmmpph I don’t know about you guys but I am a total nut for well-done gore, whether it be in film or gaming. I’ve been in love with what we’ve seen so far for REmake 2 and their “artisanal” direction really shines through. It’s so great to see this level of dedication back in the series, especially after how all over the place the visual quality of games like RE6 was. A huge part of RE to me was always the detail, and I can’t wait to have some real time to explore the new RPD building and look at everything. Hell, I can’t wait for the inevitable Boundary Break on it. All this said the interviewer did question Leon’s “floppy”, anime hairdo in this new, detail-oriented look. In response:

Some of the Western staff we’ve had on the game have also said that Leon’s hair is a little bit on the anime side… it came up. It’s not just pure photorealism, we’re balancing realism with the fact that these characters already exist. We’ve got the original Leon, we’ve got how Leon looks in later Resident Evil games, and we’re trying to make it so that it isn’t just ‘a person’. It’s actually the Leon we know already, so he has to look like Leon even if that means sacrificing a little bit of realism.

Whatever man he looks awesome honestly and considering that I uh… recently had my hair cut professionally using reference photos of the REmake 2 Leon… I can’t say that it’s particularly unrealistic.

That’s all for now, but I’m sure I’ll wake up tomorrow to even more news. We’ll, of course, keep you updated.