Scheduled to hit in early September, Dead Island is a game with a lot of hype behind it. Thanks in large part to that stunning, and emotional, cinematic debut trailer released months ago which shook a lot of heads and raised a lot of people’s hopes. It’s clear by now that that emotional prowess invoked in that trailer won’t be carrying over to the actual experience but since then we’ve received several gameplay videos that looked really good for a game in an already packed sub-genre. So, having sat down with a Deep Silver representative at E3 to play through the game’s co-op demo, how good is the game? Sorry to disappoint, but it’s not all that good. Let me explain. 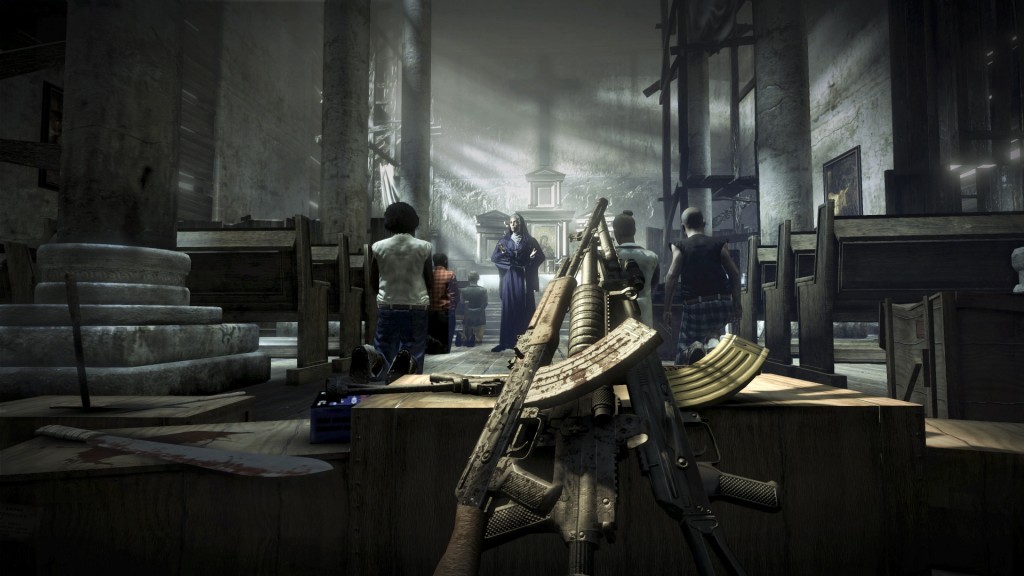 My hands-on time with Dead Island kicked off within the confines of a church with me taking on the role of Sam B. Here I was able to interact with a lot of NPC’s. Doing so would enable individual side missions to tackle. Sadly, I wasn’t able to actually engage in any of these side-missions, due to time being limited and the actual mission being the main focus of the demo. But, we did interact with one particular NPC: the local merchant. I was able to purchase new weapons if I wanted to. I bought a pretty neat axe and then opted to upgrade it at a nearby bench. You can upgrade, mod, or fix your weapons here.

Modding works as you would imagine it, and we’ve already seen one example in the electric machete. This is where the “unique” comes into Dead Island. But as you know, it’s not entirely unique thanks to other games like Dead Rising. But hey, it’s worth slapping on to the back of the box. Even after adding electricity to my weapon I still didn’t feel like I was having fun after we left the church and embarked on our mission. The combat felt off and also delayed due to my strikes not translating into actual damage for a couple of seconds. We were promised a very detailed damage system and while it is there it’s still not as satisfying as it was initially made out to be. You can still perform neat decapitations on downed enemies by standing over their head and pressing the action button but even that wasn’t as satisfying as it sounds.

Then you have guns also in the mix but those aren’t really meant to be used as much as the melee weapons are. If you opt to select a firearm as your weapon of choice, don’t come in expecting to be running and gunning with ease. This notion is justified, though, due to the main characters in Dead Island not being your typical generic heroes. Even the actual melee weapons aren’t meant to be used non-stop over and over, this isn’t a hack-and-slash game nor is it meant to be. All weapons have a damage meter and it’s wise to keep a close eye on it. You can also throw weapons at incoming zombies but if you do so just make sure to go back to their body to pick up your weapon. Not that there’s a lack of weapons to go around anyway. 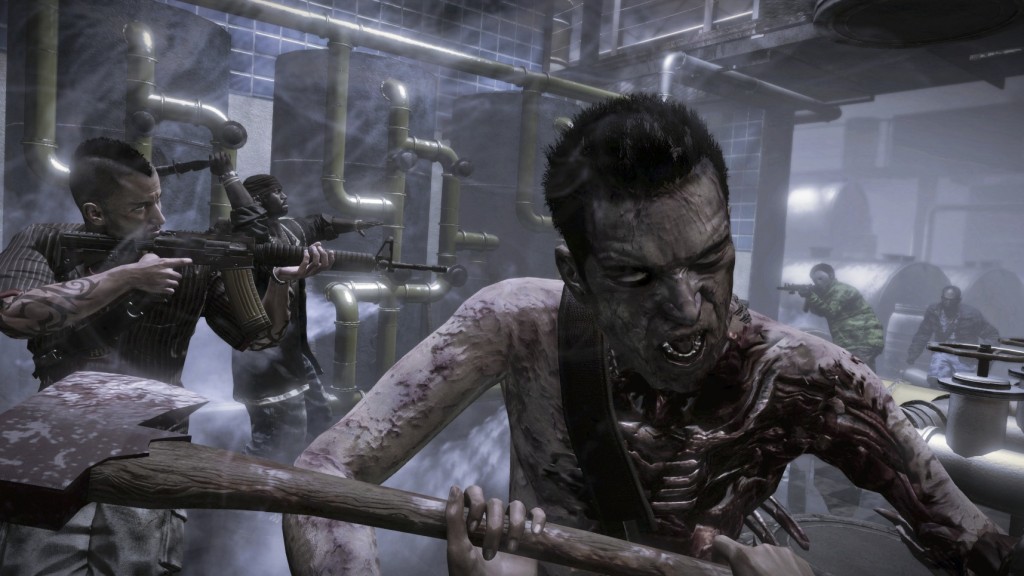 Scattered throughout the district of the island the demo’s main mission was based in were various crates that housed new weapons. And speaking of the section of the island open to the co-op demo, our intended path was conveniently marked on our on-screen map via a white line that always lets you know where to go, there’s no need to worry about getting lost during missions. But still, the entire district, which we were told made up just 10 % of this part of the island, looked bland and not pleasing. I mean, obviously it’s not meant to look pleasing but there could’ve been a bit more spice added to the visuals to actually make you want to stop for a moment and take in the atmosphere. I will admit, though, the raining effect did look nice but still, it doesn’t change the fact that Dead Island’s atmosphere is lacking.

The experience wasn’t all full of regular zombies though, you also had one agile variant of the zombie which exploded upon contact, think boomer but not as…round. Then you have the raging “ram” zombie who definitely lives up to its name. Rushing at you with full force, these guys aren’t meant to be taken lightly. During the demo, the Deep Silver representative utilized his modded throwing knives, changed to become sticky bombs, to take the beast down. These sticky bomb knives were also put to good use against the bigger zombies. These guys are just a taller and stronger variant of the typical zombies. They’re not as powerful as the ram but they’re still quite terrifying to be near. Battles with these zombie variants sparked some fun but it’s just too bad the same couldn’t be said of the whole experience.

At the end of the demo I walked away quite disappointed. I hate drawing comparisons but I just didn’t feel as much satisfaction with Dead Island’s melee combat as I did with, say, Valve’s Left 4 Dead series. It makes me even more disappointed knowing that Deep Silver has made sure the melee system in place here is one that is very robust and intuitive. I just didn’t feel any of that during the my demo play-through. The combat is slow, at times unresponsive, and quite simply dull. There’s not that many months left before the game hits store shelves, so let’s hope this remaining time gets put to good use and leads to some polishing of the overall mechanics.