Lexis Numerique’s upcoming survival horror title AMY aims to bring back that which has been missing from survival horror titles as of late: true horror. Whereas some big name horror franchises are drifting towards action-packed experiences, this downloadable title is taking a very traditional survival horror approach. AMY isn’t about making you feel overpowered when taking on hordes of monstrosities, nor is it about putting you in set-piece after set-piece. Instead, it’s all about surviving the horrors that have consumed the once peaceful town of Silver City. Today I got a chance to sit down with a representative from Lexis to get a better look at the game and here are my thoughts. 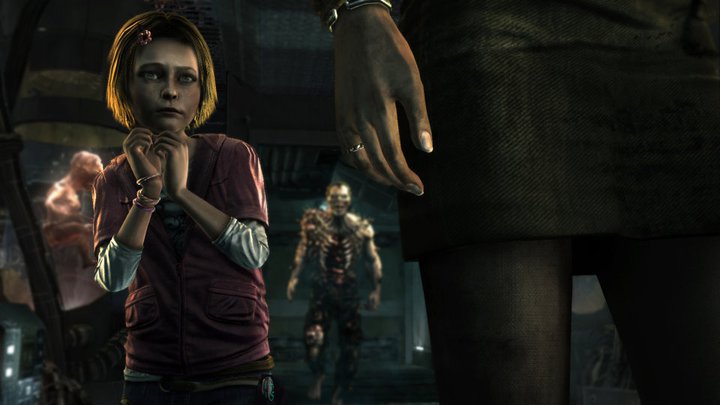 The demo presented to me started off in the now familiar subway scene in which Silver City has just been struck by a comet and the game’s protagonist, Lana, wakes up to find herself in the middle of hell on Earth. I was shown the basics in terms of how the world around Lana works, specifically how the infection that has struck the citizens works which could consume her and lead to her death if not treated properly. You can see Lana’s personal infection level by a color indicator on her back which is similar to Isaac’s health meter in Dead Space. I found this to be a very notable feature due to the lack of any actual on-screen HUD. But how exactly does Lana’s infection rate work?

Both the world around you and Lana herself are prone to this infection and as your surroundings are consumed by it you’ll start to see the changes around you, which is similar to the other world in the Silent Hill series. Lana herself also experiences these changes, which make her look more and more like one of the infected. But then Amy factors in and she’s able to cleanse you of your infection due to her mysterious abilities. This also sets the world around you back to normal. It’s easy to see that Amy isn’t a mere tag-along “pet”. This silent young girl possesses some mysterious powers that aid your survival.

Speaking of abilities, Lana herself is quite limited in those regards, which helps enlighten the overall horror experience. Lana isn’t some type of overpowered heroine, she’s just a normal person caught up in a horrible scenario, who luckily happens to run into Amy. So with Lana being kept on relate-able terms the combat in the game greatly reflects that. For the most part, AMY is strictly melee-focused, at least from what was shown to me in the demo. You can pick up various weapons scattered around and use them against incoming mutants. You can also take a stealthy approach and opt to avoid actual combat with enemies. One such example was shown in later on in the demo in which both Lana and Amy took shelter from an incoming monster in the confines of a closet. It reminded me of the hiding system in Siren: Blood Curse. 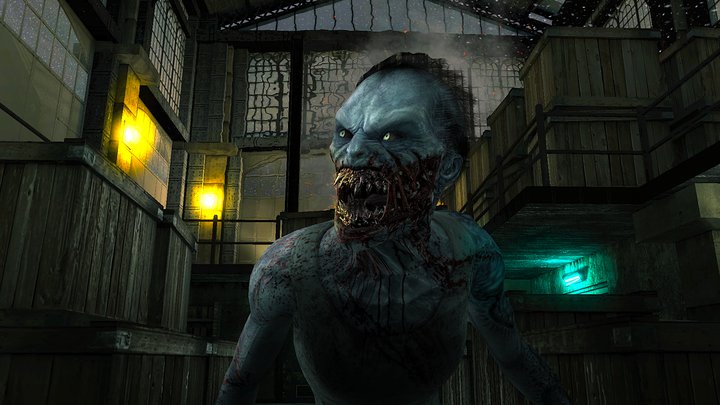 Aside from combat, the game will also have (in true horror fashion) puzzles, though there wasn’t one present in the demo. Some will also incorporate the use of Amy. You can send her to go through places that would be impossible for Lana herself to reach, thus making her get, say, a key on the other side or activate a device. And it’s worth noting how Amy herself is animated in such a way that makes her come off as truly realistic, especially when taking her small stature and age into account.

Just by looking at Amy you can definitely see the fear in her facial expressions all without the need for any spoken words from her. It was suggested to always make sure you keep Amy close do to her ability to rid you of your infection and its effects while holding her hand, thus bringing the world around you back to a normal state. But rest assured the difficulty will increase throughout the game making the act of actually keeping Amy close by not that easy. Towards the end of the presentation we were then shown the debut of a new character.

Seeing as how the whole game won’t be taking place in the confines of the subway system, we’re going to meet a good number of characters as we travel through the town of Silver City on our quest to reach the hospital in order to obtain a cure for Amy whose powers come from an unknown illness that’s in dire need of treatment. The new character we were introduced to was the town priest and his aim is to gather all the non-infected survivors to form a resistance against the infected.

With AMY, Lexis Numerique plans to deliver a true retail survival horror experience, albeit in a downloadable fashion. So far the game is shaping up to be quite a unique experience and it definitely deserves way more attention than it’s already been getting. AMY will be available through XBLA and PSN (at the price of $13) this September and it’ll be hitting Steam soon after. It was confirmed that this could be the start of a new series if this game is met with enough commercial success and critical acclaim so you owe it to yourself to download AMY when it hits in a few months, especially if you’re a survival horror fan.