For many horror enthusiasts, it’s disappointing good scary horror game releases are few and far between. Horror is a game thematic that is both broad in scope and direction, but yet we see so many companies and IPs lose sight of the terror that brought their franchises to become so big in the first place. Recently, Capcom has said that horror games just won’t sell the same as action titles. I firmly believe however that trying to turn a horror franchise into a pure action direction alienates quite a few from the series, and though understandable possibly as a business adjustment, is a suggestion of a franchise losing it’s core and soul to appeal to broader audiences. Now I don’t think action doesn’t have it’s place in the horror medium, but I also think a lot of developers don’t realize how tired a lot of folks are of pure action games, and how many of us crave actual scary games like a herd of hungry zombies.

Lone Survivor is a 2D indie horror game deeply inspired by the Silent Hill series. Created by Jasper Byrne, probably best known for Soul Brother and his 2D version of Silent Hill 2, Soundless Mountain II, he had dared to try something that not many at first glance would consider a successful formula: Two-Dimension Survival-Horror. Getting wind of this game as the horror collector and enthusiast I am, I’ve kept a silent eye over this title, which has finally released today. And to both my pleasant surprise and enjoyment, this game is fantastic at being that subtle kind of scary and uneasiness that can all at once disgust, engross, and excite you. Interesting, symbolic, with a strange off-beat kind of humor, but also surprisingly touching, this is a kind of horror game that many have been craving that simply hasn’t existed in quite a while. Even as a fan of Downpour, this is more like old-school Silent Hill than Silent Hill has been in ages, but it’s also its own thing. A kind of thoughtful horror with subtlety and well-designed fear that highlights small details and observations that tell a story, with moments one can reflect on that will make their skin crawl. Also it has a kick-ass soundtrack.

“The masked protagonist must escape from a city ravaged by disease, by any means. Starving and exhausted, he has begun to question how much of what he sees is even real.

A new kind of adventure where the choice of how to survive is up to you. Sneak through without firing a single shot, or kill everything in your path. Eat and sleep well, or resort to drugs to keep going. Search for survivors, or try to escape the city alone. Look after your mental health, or descend into madness…”

That’s the official description of the game, but it’s only touching on what makes this game worth your time.

Don’t take my word for it though. As a small studio production, the developers have put out a demo for all who wish to try before they buy. You can try the demo by clicking here.

We should have a full review up sometime soon, but if you like what you see you can purchase the game from their official website. 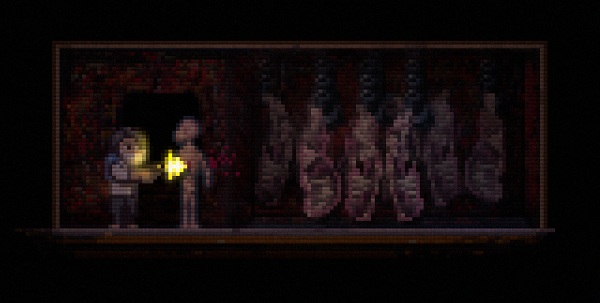