It’s been a long and agonizing wait for the latest piece of DLC for Valve’s zombie shooter.  To make the wait even harder, the L4D blog has been updating the community with the back story of the original survivors for the last four weeks.  Each week the story of a different survivor was revealed, Louis, Zoey, Francis, and finally Bill.  Each week the story leading up to the events in the DLC (a prequel to The Passing DLC) were doled out bit by bit.  The wait is finally over, and with the release of The Sacrifice for both L4D and L4D2, Valve shows us how much they truly love their fans. 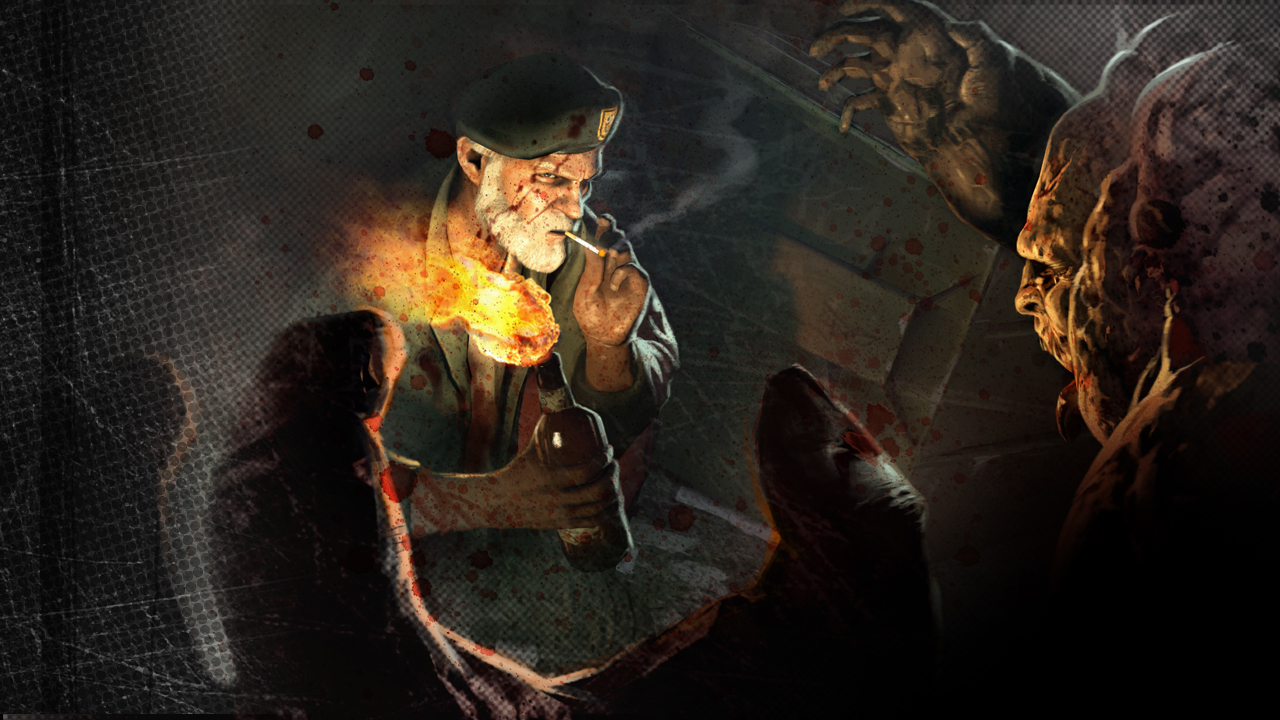 If you haven’t taken a look at The Sacrifice comic (now completed), you should take a look at it before starting this DLC for either game.  It explains the official version of what happened at The Port.  On the way, it explains other things that you might have been wondering as you’ve played through the game.  Are there any people left?  Why are these four (err, 8 if you’re playing L4D2) left alive?  WTF is up with Bill?!  It’s an often comedic look at the plight of the original four survivors.  The art style isn’t pretty, but it fits the style of the game.  Gritty, get ‘er done style.  All in all, a must-read for any fan of the series, without a doubt.

In a rare event, The Passing was released not only for L4D2, but also for the original L4D.  This review is from the L4D2 DLC, which received both the Sacrifice campaign and the No Mercy campaign.  Both versions of the DLC allow you to play as the original L4D survivors.  Both campaigns pit you as the original survivors up against new Special Infected using new weapons and items.  The No Mercy campaign is exactly the same as it was before, save for those new items and Special Infected.  Take it or leave it–it would have been nice to use the L4D2 Survivors here, but we digress.

It’s hard to play anything that’s been hyped up a lot without having unrealistic expectations for it.  The Sacrifice is no different.   Valve definitely played up the fact that the original Survivors were going to be pitted up against the new Special Infected, and there are a hell of a lot of Special Infected in The Sacrifice.  We can’t deny that it isn’t awfully fun to grab a chainsaw as Zoey or Bill and go to town on the Common Infected, or Boomer Bile one of the many Tanks hanging around in the campaign with Francis, but these thrills are rather limited and the fun of playing as different characters wears off unfortunately quickly.

Perhaps it’s because many fans already knew what was going to happen, or perhaps it’s because it seems like it wasn’t really implemented very well, but there’s a bit of an empty feeling upon completion of The Sacrifice.  Story-wise, what happens in the campaign is pretty much what you’d expect if you’d read the comic.  There’s no real conclusion in the game of what happens to our four survivors (there is in the comic, however) and the campaign ends rather abruptly. It isn’t all that difficult either and combined those factors are kind of a let-down.  Furthermore, and while it may seem like a minor complaint, there isn’t a whole lot of banter between characters here that we’ve come to expect.  So instead of hearing “grabbin’ puke!” the character will say nothing as they pick up a vial of Boomer Bile.

As was before, Valve is letting The Sacrifice DLC with No Mercy Campaign go free to Steam users (yay PC!) and for 560MSP on Xbox Live.  Proving once again that the PC (or Mac) is the platform to own Left 4 Dead on.

With The Sacrifice DLC pack, Valve has successfully pushed out (mostly) new content for both games in the series.  With new mutations and modes, Valve shows that it’s dedicated to the L4D fans by continuing to release DLC for the games.  The DLC is fun to play (as always with L4D) but comes up lacking in a few aspects.  The Sacrifice campaign almost feels like a fan-made project, albeit a very good one.