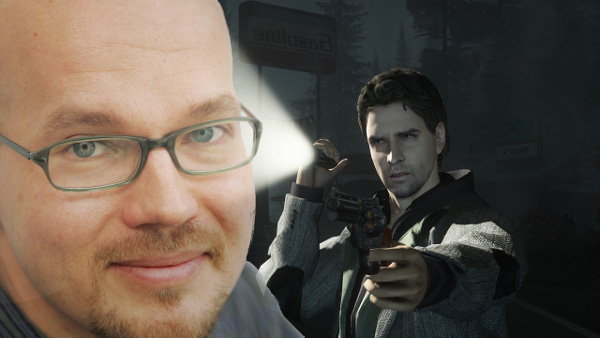 Join us as we sit down with CEO of Remedy Games, Matias Myllyrinne to discuss Alan Wake coming to PC and the series’ newest title: American Nightmare.

ROH: It’s been more than a year since the last bit of Alan Wake’s story was released. In The Writer, Alan got closer to escaping his mind and back to the real world. Does American Nightmare take place during this event, or after?

MM: The events take place after the events of Alan Wake… we leave a lot of things to be explored by the gamer but it is clear that in this sequence the world has moved on.

ROH: What are your goals with American Nightmare that you have set because of fan feedback?

MM: More intense action – that was very much the focus. AN started as we got feedback that the story for Alan Wake was awesome and the core gameplay was unique and fun… but the gamers wanted more variety and escalations in combat. So for AN, we actually started from some of the fun gameplay prototypes we had. We had these little white boxed levels where we had different wilder enemies and wilder weapons and it all grew from there. You know we had these white boards on the wall with the team members keeping score… in many ways it was a great XBLA game right there! Of course we added a story mode – we are Remedy after all and that is in our DNA.

We felt that the story needs to match this escalation in action… so the tone needed to be different to fit the different medium – American Nightmare is more Quentin Tarantino and Dusk till Dawn while Alan Wake was more Lost and Stephen King.

ROH: The Writer had a much more surreal environment design that the main game and The Signal before it. Will that type of thing continue in American Nightmare?

MM: The Writer had some surreal moments, it felt like Salvador Dali was doing the level design at timesJ No, seriously we wanted a different angle this time- we like to keep it fresh and to mix it up creatively. Too many times creative people get caught in doing more of the same. While that may work commercially for the short term it is not creatively healthy on the long term. You need to do things that are a little bit new and different to maintain focus – once you are too comfortable it starts to show in the work.

ROH: What are your influences for the game? It’s set in a desert town, so what has the team been watching for inspiration?

MM: There are various pulp elements there – and I think it is a melting pot of American pulp movies and literature that we draw from, the locations are familiar from this common subconscious that we all share – but still feel unique and fresh. The motel for example just feels like you have seen it in a film, the drive in movie theater and the mountain top observatory are all quintessential places of Americana. The enemies and three women who help Wake… all elements that feel “right” – yet I think our team have done a good job of making all these things unique and giving a twist to the genre.

ROH: We noticed a much more vibrant color palette this time around. How has the art style changed in American Nightmare?

MM: Yes, there is a much wider color palette that we went for. Part of it is the natural way Arizona looks, the temperature of the light is different to the Pacific Northwest. The other side is that we had beefed up our technology on the graphics side – the visuals for the environments are improved as a result of that too. Last but not least, our team has been working together on the same tools for longer and are on top of their game.

ROH: How long will American Nightmare be, and any idea on how much it will be selling for?

MM: It will be about four to five hours and then loads of “Fight Till Dawn” arcade maps. Great value – at 15 bucks.

ROH: Will there be any returning characters in American Nightmare?

MM: Yeah, the familiar cast will be present in the backdrop… but this is more focused on Alan Wake trying to stop his evil double Mr. Scratch from harming, Wake’s wife, Alice… but I do not want to give the plot away.

ROH: Will there be any promotional materials similar to Bright Falls before release?

MM: Not as such, but we do have the freakiest developer diaries currently out. Ozz, Sam and I had a lot of fun filming those… all three of them should be out by now. Also, Mr. Scratch is leaving Wake video recordings of his horrific deeds – this in themselves would be great to share with the world out there, but we may want to save them so that gamers do not have spoilers out there before they play. Check out our “Mr. Scratch” trailer for a great glimpse into it!

ROH: In a previous interview Sam Lake said that Mr. Scratch can be considered the Devil. We know you won’t say, but it seems like Mr. Scratch is either another manifestation of The Dark Place, or perhaps a byproduct of it from Alan’s own shattered mind (perhaps even Zane?) Humor us with our theories 🙂

MM: He is Wake’s evil double. In Alan Wakes world fiction can now come real. So, Mr. Scratch is an urban legend come true. When Wake disappeared at the end of the first game, the locals started telling stories about a mysterious writer who disappeared and apparently was a serial killer and killed his wife too… all this folklore has now come true. This plays with the familiar themes, kind of like the classical idea of a boogieman, repeat his name too many times and he become real…

ROH: Alan Wake has just been announced on the PC. How long has this version been in development, and what can PC gamers expect to be altered to fit the platform?

MM: Alan Wake is coming home. The inception was on the PC and that’s where the development happened for a long time, now having Wake come home to peoples PC feels right. It has been a long wait, and we had so many requests from fans out there, so when Microsoft gave us the freedom to pursue this we jumped at the opportunity. We are working with Nitro to deliver a true PC game. Yes, there are things that flow more naturally on PC just because of the platform it is technologically, but I think it is mostly about hitting a true game – something that is true to the original vision without just a quick port – but a true game in its own right. The controls are a big part of this as is the camera – when the input and control mechanics change you need to account for these in the game… games are interactive – how they feel and play is just as, if not more important than how they look. We all know that a broken camera or laggy controls will kill immersion and fun quicker than a big mac disappears from the back room of a weight watchers meeting.

Thanks to Remedy for the interview opportunity. Keep the lookout for our Alan Wake’s American Nightmare review!