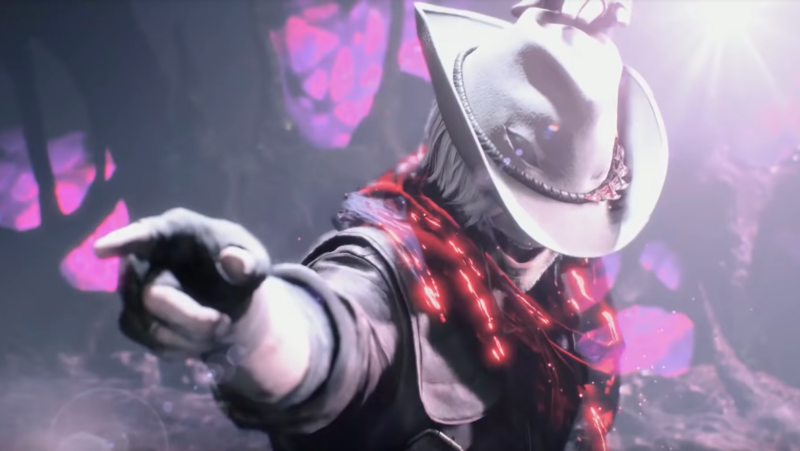 During the flurry of exciting announcements at the 2018 Game Awards (Mortal Kombat 11 and Fal– I mean Outer Worlds!!!), we kinda missed the boat on the new DMC 5 trailer, which announced that the Xbox One exclusive demo was dropping, and showcased a bunch of new gameplay.

The main highlights (aside from Lady, my one true gaming girl love — don’t tell Rebecca, Cindy, Serana, Cla–) is seeing the new character V in action, and the new co-op feature. V appears to be able to conjure “familiar” type beasts that do some or most of his fighting for him. It’s pretty cool, and sets him apart from Dante and Nero in terms of style — even if I’m not sure how I feel about his Kylo Ren meets the South Park goth kids attitude. The co-op feature is also super interesting. It’s something we’ve known about for a while now, but had yet to really see in action. I had been hoping for full on campaign co-op, but it looks like it will be closer to Resident Evil 6‘s “situational” co-op. While RE6 had two-player co-op for the entire game (after a patch that gave Ada a co-op partner), but certain situations would allow up to four co-op players at once. Moments, where Chris and Piers fought alongside Sherry and Jake, would actually become four players if you allowed the drop in co-op. It required another random player(s) to be at that point in the game as well (which makes the feature sorta… dead now).

Apparently, DMC5 will be handling it somewhat similar, as the game is mostly single-player, but during moments in the story where Dante squads up with Lady and Trish, or Nero with Dante and V, the other two characters can have players drop in and control them. I uh… I’m not exactly over the moon, but who knows, maybe it’ll work. I just worry it will have the same issue that RE6‘s multiplayer modes had in that they quickly dried up as more and more players just turned the online functions off or stopped playing altogether. The player base drying up is an eventuality, not a risk, with multiplayer games, but at least most make it easier to play with the pals you know if randys aren’t available. However — the trailer also announces the return of The Bloody Palace, a tournament mode of sorts where you fight against increasingly large and more difficult hordes of demons. It’s been in every DMC game since 2, and will be added in to DMC5 as a free update a month after release. I can’t find any info, but there’s a very good chance that Bloody Palace could be co-op.

We’ll keep you updated, but while you wait the E3 demo for DMC5 is of course now available for Xbox One. It’s uh… well, it pulls my Devil Trigger.