Dead Island "Absolutely Not Like Dead Rising 2" - Rely on Horror

There’s been lots of news surrounding Dead Island lately.  Several other gaming sites got a special treat at the Game Developer’s Conference in San Francisco and were able to get a nice preview of what the game has to offer.  Lucky for us, those sites have turned around and let us know what’s in store for summer vacationers.

Kotaku claims it’s “everything good about zombie games, a shambling stitch-work of the best bits of the last decade’s undead gaming and fiction.”  Neat – and also some pretty big shoes to fill. 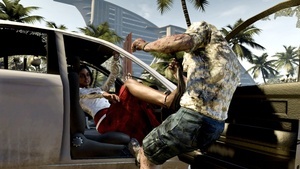 Dead Island is the story of paradise gone mad, says Vincent Kummer, brand manager with Deep Silver.  People head to the Banoi island resort to escape, but as it turns out they’ve pushed their toes into the sand of their worst nightmare.  The game is supposed to symbolize the paradox of Heaven and Hell.  A lot of people die, a lot of people are turned, there are arms and legs and heads lying all around.

As was probably already guessed by now, you’re not alone on Dead Island.  You’re not the only one who’s survived.  The beginning of the game pulls one of the lead characters, Sam, into a boat house where other survivors have taken refuge.  One woman sits with her knees pressed to her chest, rocking back and forth, muttering to herself.  We’re pretty sure that given the same circumstances, we’d be no better off.

The game is also co-op, as if that last paragraph didn’t give that away.  You can play as a variety of characters, each with their own unique set of skills and abilities.  These abilities can be upgraded throughout the course of the game, giving it an RPG-like feel.  For instance, Sam has the ability to crush zombie skulls with his feet (gross) and the Fury mode that increases his attack power.

Which you’ve probably already seen is that Dead Island utilizes melee weapons only.  These are things that seem suitable for the location.  I don’t particularly want to go to any tropical resorts where there are more guns than limbo sticks, thank you very much.  Wonder if that’s a usable item?  Techland’s international brand manager Blazej Krakowiak makes one thing clear – despite the initial impressions, Dead Island is “absolutely not like Dead Rising 2.” 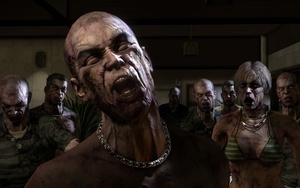 There are several different kinds of zombies in the game too.  For instance, there are the slow Resi-type zombies known as Vessels, and then there are the Infected.  Running zombies – L4D style, and mutated zombies as well.  The whole undead kit n kaboodle here. You can run from the slow zombies, but not from the fast ones – they’ll catch up to you.  Bummer.

Resembling some of our other favourite zombie mash-em-ups, Dead Island also has safe areas where you can take refuge from the onslaught.  However, they’re not safe until you make them safe.  So like in the CoD zombie levels, you need to work your way through and eradicate the infection from your new-found shelter.  Then you can call over the rest of the survivors to your new pad.  They’ll bring with them tools and skills that you can use to progress further into the game.  Thanks for all the help, guys – really.

So, contrary to Kotaku’s look at the game, IGN also got its own little preview and describes the game a touch more fittingly – Wacky, goofy and silly.  And also fun.  Well see, that’s what we like to hear, “FUN.”

Characters spout out phrases like, “Daaaamn, that bitch was huge!” (referring to a giant mutated zombie) and “You a dead bitch now!”

Two very different perspectives on what appeared to be the exact same playthrough. 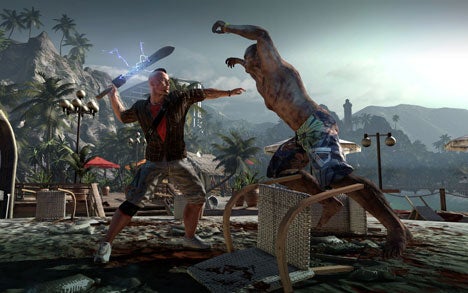 Where Dead Rising was wacky and over-the-top, Dead Island, according to Kotaku, looks to keep things serious.  Yet at the same time uses stereotypical characters spouting off stereotypical jargon.  And we would have to wonder where on the serious side of things the Electric Machete that was previously touted comes into play (also, a knife attached to an explosive…hmm, wonder how that works?)

For comparison, we might be able to equate it to the GTAIV of sandbox crime sims as opposed to Saints Row 2.  Still silly enough to be fun, but takes itself a lot more seriously.

And there was nothing wrong with Saints Row 2 by the way.  Some prefer it over the more serious tone of GTA IV.  RoH will keep following Dead Rising until its release later this year for the Xbox 360, PS3 and PC.