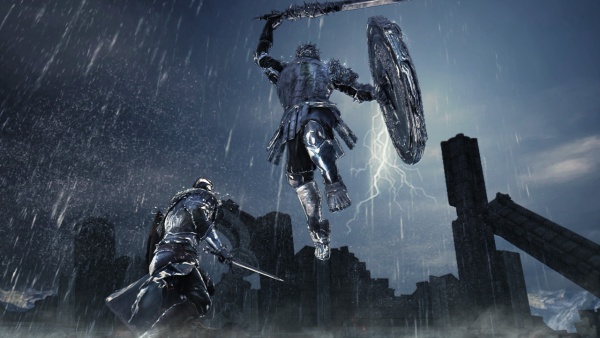 It didn’t take me long to notice something was wrong with the way Dark Souls II looked. It bothered me so much that I was starting to feel the game was going to let me down. However, now that I’m nearly thirty hours into it, I can say that Dark Souls II is a great game and may even dethrone the first one by the time I finish it. But that still leaves us with the question, why did the final release not have the lighting and textures seen in the promotional footage?

Yesterday, Bandai Namco and From Software released a statement saying the game was unplayable with the graphics they were pushing, so they downgraded everything. That doesn’t exactly please people or ease them the way they hoped it too. A writer at Forbes spoke with someone who was close with the development of the game and shed more light on the statement.

His source had this to say:

“This is what it comes down to: a playable framerate. The early builds that the screenshots came from were playable but only just so. The game was not in a state where it could be sold at that point. I strongly suspect that they were focusing heavily on delivering a top-notch experience on PC and underestimated the challenges the new systems would pose on PS3 / Xbox360. That’s my analysis, anyway. But, factually, the early builds played like Blighttown the entire game.

“I sincerely don’t think they intended to deceive, but in the end they sacrificed a huge amount of graphical fidelity at the very end of development because they couldn’t resolve the framerate in any other way. They had to promote the game with screens and trailers, but at that time even they had no idea they were going to have to drop the settings so much, I suspect.

“I want people to know the truth. I know a lot of people just feel lied to, but I think the reality is a bit different. It doesn’t mean they handled it properly, but I think they made the only decision they COULD make in the end. The game would have been much worse without the change (as in, many would call it unplayable and broken.)”

“We always had in mind the next generation, such as DirectX11 and next generation hardware when creating our technology, and also challenged ourselves as programmers to simultaneously create for the new generation. The thing we prioritized when re-creating our engine was, as a concept, taking the graphics to a more photo-realistic look, and in order to fulfill this, we had decided to discard our old engine and create a new one.”

There you have it; From Software nearly bit off more than they could chew by trying to create a new engine for the game to push more impressing lighting and photo-realistic images. It sounds like they realized their issue and made the only choice they could before the game was too late to salvage by downgrading the graphics and lighting.

Bandai Namco has said that more details on the PC release of the game next month will also come out sometime in April, so it is possible that the PC release will have the same photorealism and impressive lighting as the promotional material, but we can’t be certain. In the mean time as I slaughter my way to The King, I’ll be wondering if Dark Souls II will see a next-generation re-release on PS4 and Xbox One.