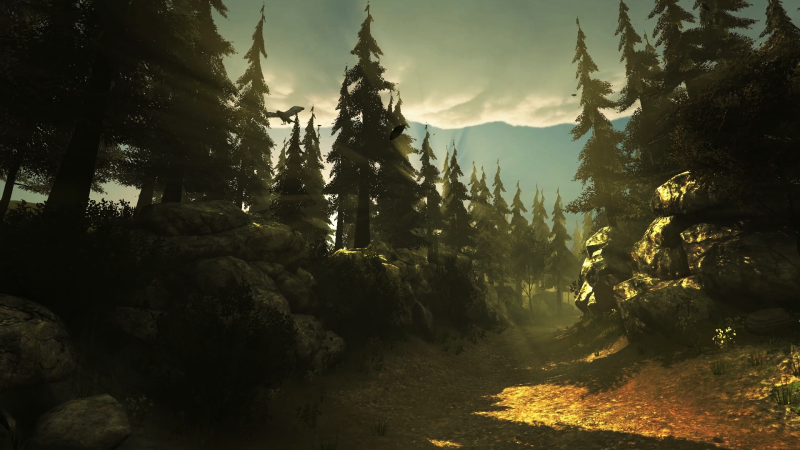 While browsing through Steam Greenlight’s horror entries last week, a game called Left Alone caught my eye. After reading through the premise, I went in search of any and all information about the storyline and developers. Volumetric, a two-man team out of the UK, didn’t disappoint, with frequently updated GameJolt and Facebook pages and a very professional website.

About the game: Left Alone is a survival horror in which you play Joel Dent, a man taking a break from the stress of life by camping with his friends in Wisconsin. When they fail to show at the meeting place, Joel goes searching for them and finds himself touring a long-abandoned boarding school, uncovering the dark past of the school and finding that you are never really left alone.

Looking at the stills and the trailer the team have released so far, an immediate feeling of nostalgia for the middle of the Silent Hill series sets in. We were excited to learn more, and are thrilled that Matthew and Damon took some time from their busy pre-release developing schedule to answer a few questions for us.

Q: Volumetric is a small team, and is working on the game without the support of a major publisher. What are kind of challenges have you faced as indie developers, and how has that affected your overall goals for the game? Do you feel that independent development has allowed you to be more true to your vision for Left Alone?

Yes, we feel that being independent has allowed us to take our time on trying to reach our vision of what we want left alone to be, without being pushed by an external publisher. We haven’t had any crowdfunding or investment from any other sources for this game and it has been entirely funded by us.

Q: There are two of you on the team. Can you tell us a little about yourselves and what interested you in game development? What made you decide on horror?

We both met at university, during our Games Design course and gained top honours degrees. We have been close friends ever since. We live and work together from home which is very handy as there is no requirement to travel and expenses on an office or studio which increases development time.
We both suffer from life-long disabilities but we haven’t let that stop us trying to create games even when it can be difficult on a daily basis. Damon suffers from Cystic Fibrosis and Matthew from both Arthritis and Glaucoma, we’ve had severe problems with said conditions over the period of developing Left Alone which has required admission into hospital. We are both massive gamers and have always had an interest in the development process of games, once you become a developer you can never look at a game the same way again. We chose horror as the genre for our first game because there is no genre like it for creating a memorable and immersive experiences.

Q: I’ve seen the stills from the game, and will be posting a gallery with this article for the readers to look at. You seem to have nailed the ambience of a good psychological horror game. I noticed that you said on the site for Left Alone that you want to redeem the Unity3D engine to the gaming community; it has a reputation for extremely low quality graphics, long load times, and glitchy games. Given that, how important was it to your team to really smooth out graphics and gameplay, and give such rich detail to the world we will be playing in? Was there ever a point where you felt that the limitations of Unity held you back, or do you feel that the engine allows for enough depth for the community to expect this level of polish from most games developed on Unity3D?

Yes, we feel unity has been given a bad name over the last few years and we don’t believe this is because it’s a bad engine as such, but because it’s easily accessible for amateur developers and a lot seem to rush their games and not put love and care into them. We began our journey developing Left Alone back in 2014, as we’d seen an indie horror game with poor gameplay, graphics being played by a famous YouTuber. We said to either other: “We can make a game that is better than this”. Left Alone began with the idea of creating a horror game in the woods and release for free but over time as expanded to a fully-fledged experience. We are using Unity 4 which a considerably older and undeveloped engine than the likes of unreal 4 or Unity 5, but as you can see from our trailer and screenshots we have still managed to gain a believable graphic fidelity even without modern technology.
We have learnt a lot in our development process and it’s perhaps taken longer than we had of liked but we were determined not to rush out a poor product, but one that we could be proud of.

Q: Summarizing your website: In Left Alone, you play Joel Dent, a recent divorcee who takes a camping trip in Wisconsin with his friends to get away from the world for a while. Things go a bit pear-shaped when his friends don’t arrive at the meeting point, and his search for them leads to an abandoned boarding school with a dark past. Players will work within a high-suspense atmosphere to solve puzzles and collect clues, and their choices will affect key moments in the plot.

Is there anything else you can tell us about the game at this point, without spoilers? What level of combat can we expect? Does the game have expanded lore or collectables hidden in the environment?

Yes there is a lot more story to uncover, not just the story of Joel and the disappearance of his friends but a thick plot behind the history of the school. The game has some good surprises in there that we’re excited for players to uncover. We have gone for a heavy psychological play with Left Alone. The gameplay will be about discovering the story behind Joel and the eerie truth about Mounthigh School as well as solving puzzles and clues to keep on the trial of your friend’s sudden disappearance. We have worked really hard of nailing a special atmosphere using clever sound design and a play on the mind. We are very happy that you have mentioned that we have “nailed the ambience of a good psychological horror game” thank you!

Q: The trailer and stills from Left Alone remind me of the the Silent Hill series, and make me eager to play the game once it is released. It seems like there was some concern from Steam users that Left Alone might be a Slender clone, and you’ve stated that it is not related to Slender at all. Will Left Alone give players nostalgia for any other existing games? What pieces of horror culture have you drawn on for inspiration while creating Left Alone? Are there any developers, directors, or writers who have been particularly influential in your work?

There is no one game that is the centre of our inspiration, but we have played and watched hundreds of hours of horror games, whether this be AAA, or completely indie and we have tried to develop a game that incorporated the most successful elements of these games, along with trying to avoid the mistakes that many indie horror developers fall into that many comments get talked about.

Q: The release date is pushed back a bit while you work on the game. Do you have an updated goal date for release?

We are aiming for a release very soon and will posting new screenshots this week, as well as brand new release trailer very soon. We can’t give an exact date but within the next month is our aim.

Q: Were there any ideas for Left Alone that just didn’t fit into the game? Are there any plans at this point for a follow-up game, or a completely different game from your team?

It all depends on how well Left Alone is perceived but you can never rule out a sequel. We will see. As for our next game, yes we have a concept in mind but we will not be revealing details about that until we are a further into the development process.

Q:If you had thirty seconds with a potential player to get them excited to play Left Alone, what would you say?

If are looking for an unnerving experience that you will never truly forget and are a big fan of old school psychosomatic horror then Left Alone is a game that will deliver a chilling, startling and unforgettable rollercoaster.

Thanks to Team Volumetric for answering our questions and sending us their latest stills from gameplay. We will be posting the Left Alone launch trailer next week, and reviewing the game this March when it is released, so stay tuned!