QuakeCon 2017: Shinji Mikami, John Johanas and Trent Haaga On Evolving Horror With The Evil Within 2 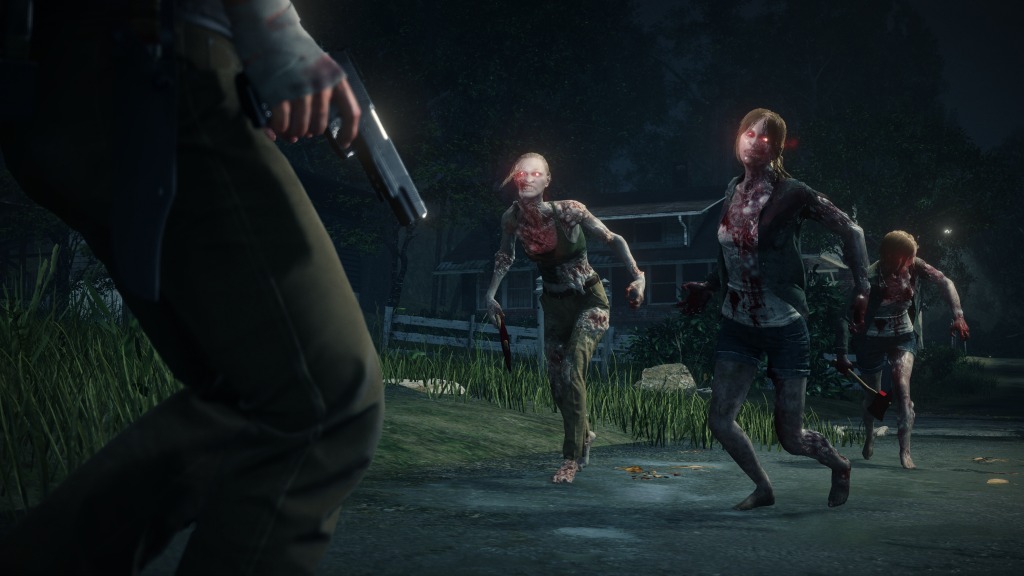 Recently several journalists and I had the opportunity to sit down and talk to some of the creative minds behind The Evil Within 2, including Tango Gameworks Studio Director Shinji Mikami, Writer Trent Haaga, and Game Director John Johanas. Having recently had a chance to play through an impressive early portion of the game, we were all eager to get our questions in. There is a formality in the air as we each introduce ourselves and the outlets we write for. All of the developers on the couch in front of us look incredibly tired, fresh from Gamescom and having been interviewing all day, but they remain polite and attentive as we prepare our questions. Note: some translated quotes have received minor corrections for clarity.

The first thing discussed were improvements made for this promising sequel. “We decided to modify the approach a little,” said Mikami. “In the first one, it’s a straight pathway that you move through, but we wanted to make it a much wider map this time.” Mikami also mentions that other factors have been taken into account based on fan feedback, including changing the often-derided Letterboxing around the screen, and adding a wider range of difficulty settings to be more friendly to new players.

When asked about the decision to bring Sebastian Castellanos back for a sequel, Johanas, who is taking over director duties for the sequel, says that it had always been the plan. “From the beginning, there were various concepts, but Sebastian was always at the center,” Johanas said. “It was a character we wanted to come back to, because even though he was in the first game, we didn’t get a chance to explore his character and who he was.”

Many of the questions have a strong emphasis on the narrative focus of The Evil Within 2 throughout the first half of interview, including how the game’s more open-ended level design has influenced the storytelling. 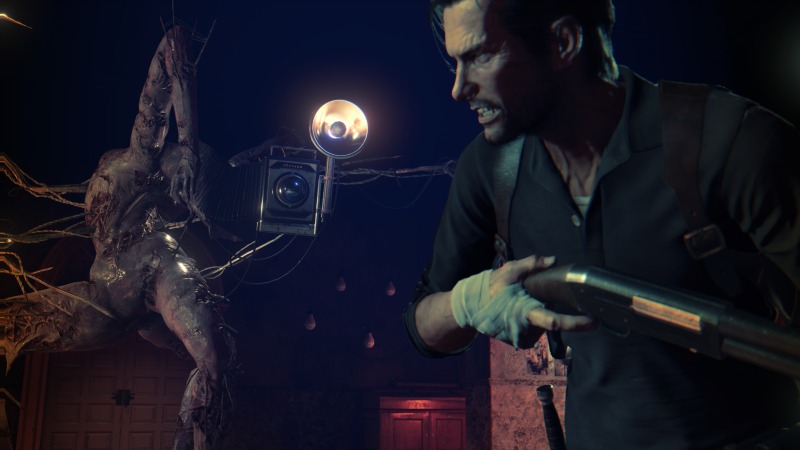 “The first game, everything was left to the player, and because of that a lot of people didn’t get the full extent of the story,” Johanas said. “In creating this one, we wanted to make sure that people got that core element of the story, and no matter what you do, you follow that path to get to that story completion. But all the exterior details like what the small stories that occurred in this world and the people involved in them, that we really leave up to the player to explore and find out.”

“I think from a writers perspective, it was really exciting,” added Hagge, following up on Johanas’ response. “You know, normally when you write a movie, you have a very small window. And we’re controlling who you see, what they say…It was kind of like writing a choose your own adventure book in a way, as opposed to writing a screenplay. It was a really fun experiment.”

There were also a few questions revolving around The Evil Within 2’s new antagonist Stefano, and how his inclusion has changed the team’s approach to designing the world within STEM. “We featured one character named Stefano, who focuses on things like the beauty of death and things like that,” Johanas said. “There’s less focus on torture, and more of a surrealist experience.”

The team indicates that Stefano will have an impact on the enemy designs throughout the game. “Just like in the first game, all the enemies were based off, for example, the Ruvik character…this time it’s Stefano, the artist,” Johanas said. “How can we make designs that reflect the characters that are in this game? For the most part, thats how we sort of centered our designs around the enemies.” 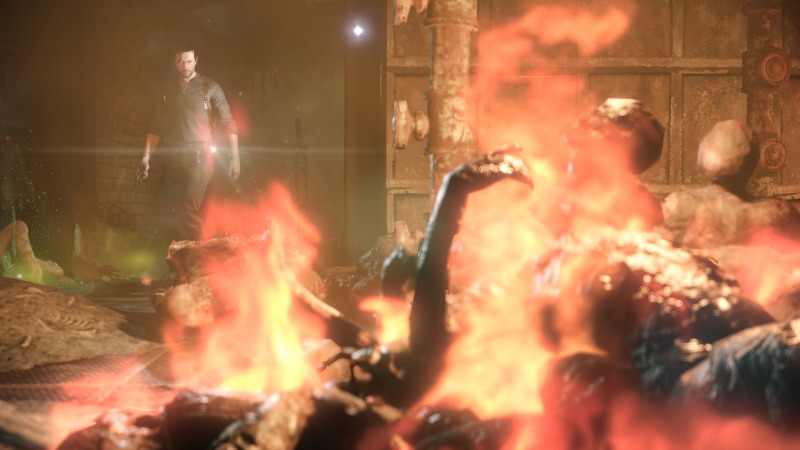 When asked about any games or movies had influenced their work on Evil Within 2, Mikami and Johanas had answers ready. “Ok, so for me personally, the movie The Cell, or Texas Chainsaw Massacre,” Mikami said pensively. “Those are the ones I personally feel some influence from.”

“I think from a gameplay perspective,” starts Johanas thoughtfully. “The way we approach the open world section, was not a complete copy of those games, but the way Dark Souls and things like that put breadcrumbs for you to find, like lore pieces without just handing it to you. We tried to do an approach like that, but less abstract.” Despite admitting some Dark Souls influence, Johanas admits that the biggest inspiration came from the first game itself.

“Really, we just looked at the first game and tried to figure out how much we can refine and learn from our experiences in the first one and make it better.”

Some questions veer off the topic of The Evil Within 2, and more towards how the creators felt about the horror genre in general. “Well my answer is simple,” states Mikami when asked what kept drawing him back to the survival horror genre. “I love horror. Some people love going to a haunted house, other people may get a thrill from riding a roller coaster. I love getting into horror games, that’s how I am.” Mikami admits that there are things too scary for even a master of horror like him. “What I don’t like most is the Ferris Wheel. It’s very scary,” He admitted, laughing out loud. “No thank you.” 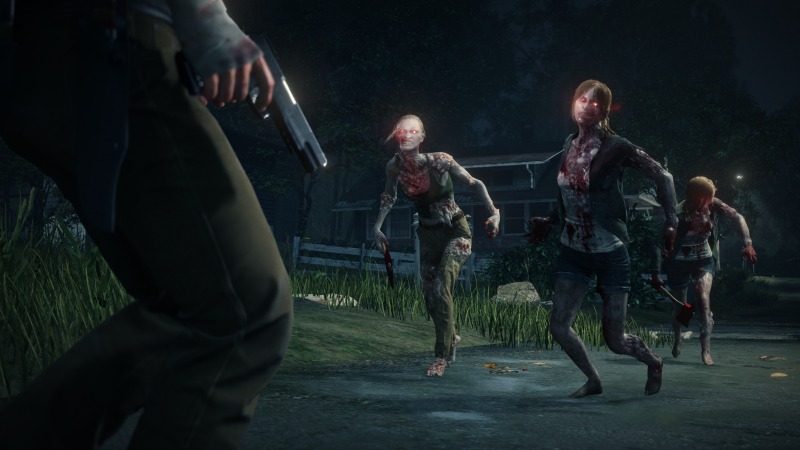 Hagge has a slightly different approach to the same question, seeing horror as more of a method of examining real life through a fantastic lens. “This is a delivery system for truths that are maybe just a little bit cynical, that we don’t want to acknowledge,” Hagge said. “You’ve got monsters and whatever, but ultimately this is a story about a guy who loses his daughter and is on a redemptive quest to get back what he’s lost. And I love that, I love horror because of the deliver system it provides.”

In a room full of horror fans, someone had to ask about the more action-oriented direction that horror games had taken in recent years, and if The Evil Within 2 would be a part of that trend. While internet comment sections and overbearing fans of series like Resident Evil and Dead Space are quick to denounce setpieces and the like in their games, the game developers in the room are a bit more metered in their critique of the trend.

“This is purely my personal opinion…as far as horror is concerned, once you make the first version, then there is a certain pattern created by that,” starts Mikami, getting ready to break it down for everyone in the room. “So you have to kind of go after that pattern, and therefore there is some restriction. But you have to kind of make sure that you create some new horror stimulus, and that’s a difficult thing to achieve.”

“At some point, the action games are better received by the majority of the players,” Mikami continued. “So usually a development team tries to make the game more interesting, more attractive, more enjoyable to players, and while they are playing the games, naturally, without really feeling it by themselves, the action elements tend to increase.”

Getting back to the subject at hand, Mikami summarizes. “Now in The Evil Within 2, we reduced the action elements and made it closer to pure horror games.” 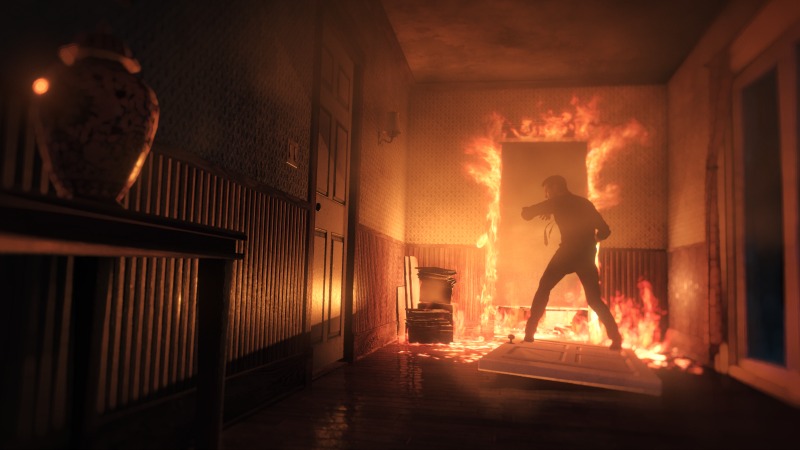 Johanas cuts in for a moment, building on what Mikami said. “Once you make one entry, you really sort of lose the fresh impact that you get because there’s new situations and new whole concepts in the horror genre,” said Johanas. “So usually the only way is to make it bigger and better, which adds more action, bigger set pieces.”

One question that gets the developers thinking is about what part of creating the game they enjoyed most. “The hardest part was making it, the most fun was seeing everything come together,” Johanas said, a definite hint of exasperation in his tone. “Lots of moving parts that are very chaotic, but when it comes togther at the end, you’re like ‘Oh, this works out pretty nice’.”

Trent perked up at the question. “For me, there was just a lot more characters this time around, and we get to learn more about them including Sebastian, who was in the first game,” Hagge said, clearly passionate about his work. “Just looking at these characters and being able to three dimensionalize them and try to give each one of them a unique voice.”

He does single out a favorite as well. “Stefano, hands down is my favorite guy. To create his voice and see him come to life was really fun.”

Someone asks if Sebastian will ever get to pet the cat that we got to see in the demo. “That’s a spoiler right?” Trent laughs. John simply shrugs and responds: “You’ll have to play it to find out.” 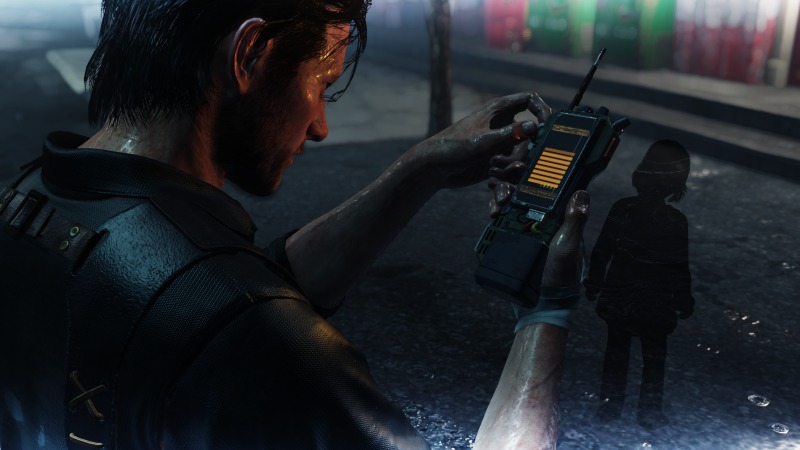 We briefly get back to how The Evil Within 2 is innovating on the first game with a question about how player progression has changed. In my time with the demo, I had noticed that it had been overhauled to offer a greater amount of player choice as opposed to the basic stat increases in the first game. John breaks down the thought process behind the changes for everyone. “Compared to the first game, we wanted to let you play in styles you like to play,” Johanas said. “For example, with sneaking, we tried to make a more viable option for a majority of the game, so it has its own tier you can level up for that aspect of Sebastian.”

Johanas acknowledges the new crafting system similarly gives players an amount of freedom they may not have had before. “In the same way, crafting lets you choose which weapon you want to make ammunition for. So if you have a preference in weapons you want to use, or if you feel a situation coming up, you can use a certain one.”

As the interview draws to a close, we get one last question directed at the developers personally, asking if there were any personal fears confronted while developing the game. Mikami ponders the question for a moment, smiling slyly. “Well, it’s hard to tell you, and I don’t hate that person, but I fear that person, and that person is my wife.” Everyone laughs as John turns to Mikami. “Now I know why the Ferris Wheel enemy was shot down.”

More laughter. There is a slightly different tone in the air than when the interview began. Over a period of roughly forty minutes, the developers got to dive into what made their labor of love tick, and we journalists got all the answers we need. As people begin packing up, I request to ask Shinji a question that isn’t Evil Within-related. He nods.

“Do we need more dinosaur-themed horror games?” When his translator finishes, Mikami has a brief burst of laughter before simply stating “No.” He says it with the cadence of a veteran comedian delivering a killer punchline; they’re not just masters of the horror genre, they know their way around an interview as well.