Preview: World of Horror – a Cosmic Horror Adventure of the 1-bit Kind 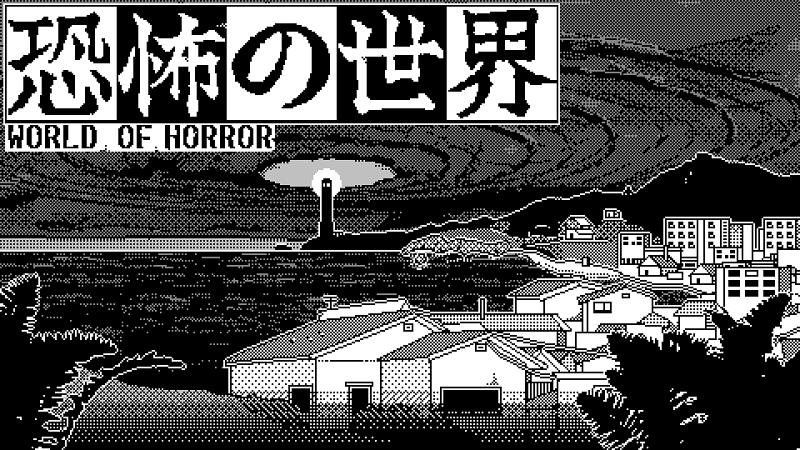 World of Horror is a new 1-bit Adventure Horror RPG from Polish indie dev panstasz that takes the unique approach of mixing the Japanese cosmic-horror manga aesthetic and themes of Junji Ito with that of 1980s adventure games. The game has been in development for several years, as we reported almost two years ago, and is finally playable to the public in early access form as of February 20th.

The developer describes it as a “1-bit love letter to Junji Ito and H.P. Lovecraft,” which is an extremely fitting and concise description. At the same time, its appearance seeks to mirror 1980s Japanese aesthetics. It feels akin to what has become the “vaporwave” scene in pop culture, with specifically dated images and themes from that time and place. 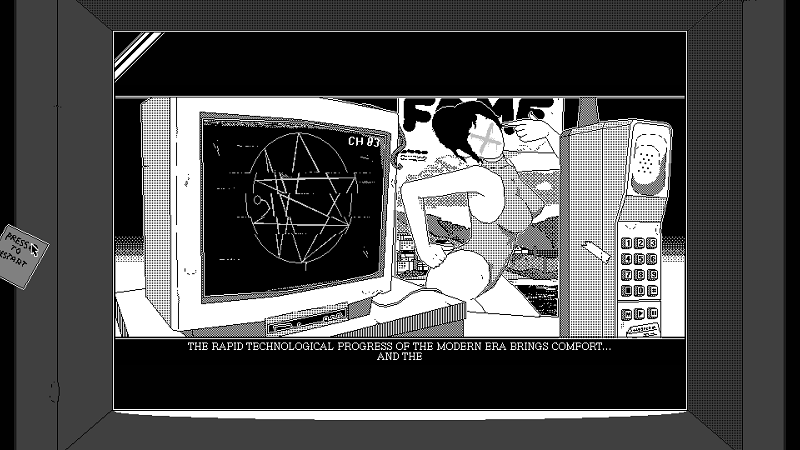 While it’s a little hard to fully describe everything that World of Horror has to offer, it can first be said that this is strictly a visual novel-style RPG game. As such, it involves reading mountains of text and clicking menu buttons, which will be the entirety of your experience here. There is a lot of material within the game, though, so players who enjoy visual novels have plenty to dive into.

If you’ve never played any of the antiquated RPGs that the game is paying homage to, the menus and setup of the gameplay loop can be very confusing at first. The game itself even explains this to you in the beginning, warding off the bewilderment of younger players. These types of games didn’t usually make their way to Western markets, even back in their heyday. They certainly don’t remain popular nowadays, except with very niche audiences, so being a little befuddled by it at first is fairly normal. 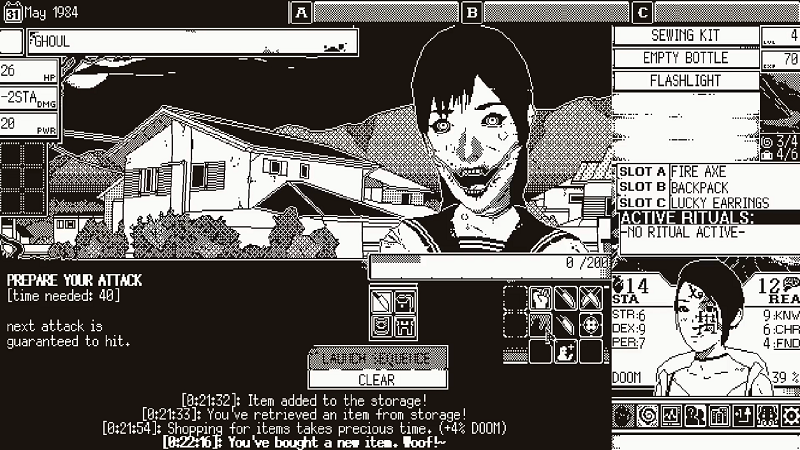 There is a good amount of visual overload with this type of game, with text, buttons, and other options all over the place. While less common, players do have the ability to click on various items and areas within the picture images of the environments and events that will appear in the main display frame. It also features a heavy element of micro-management. There is a whole host of things to keep track of here, including location hopping, various places to explore within each location, items, spells, allies, equipment, and several other deep RPG elements that may turn off some players who prefer a more streamlined or straight-forward play style in their horror games.

Even if you aren’t too familiar with these types of games (admittedly, I’m not the biggest visual novel or deep RPG fan myself) World of Horror has a charm all of its own. This largely stems from its amount and variety of content, some very nice pixel graphics, competent horror writing, and a lot of fun references to all kinds of horror properties, from games, books, movies, and more. There is something here that will satisfy any big horror fan. 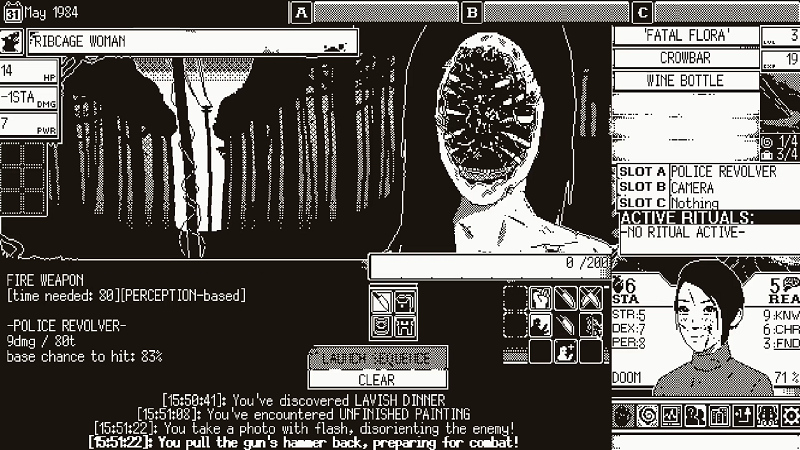 It is noteworthy that this is still an early access game on Steam and Xbox Game Pass for PC, as well as a non-DRM indie release on itch.io, and therefore it still has a number of bugs. There are also some missing modes and options here and there, but it is fully playable and rather enjoyable in its current state. The game starts by having you choose between starting a shorter tutorial mode, a somewhat pre-determined story mode, or a mode that lets you fully customize your playthrough by choosing characters, storylines, and many other options before starting your adventure.

Once you begin, each playthrough issues a set of 5 missions, or “mysteries” as the game calls them, randomly selected from about twelve options. You may investigate them in any order you choose, which also brings us to another huge point of the game: everything is randomized once you start the gameplay. Encounters and events happen very much at random, with some events and enemies appearing across different mysteries, and other events being exclusively tied to one specific mystery. 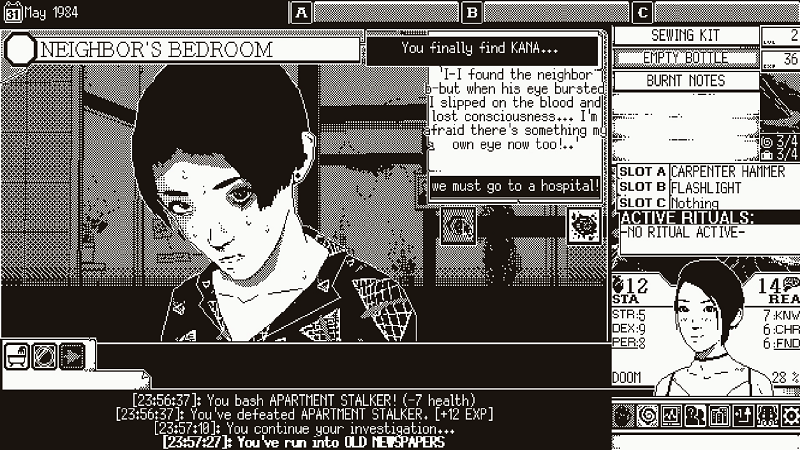 The nature of the story flow and mysteries system means that there is not much of a bigger overarching narrative that ties all the different events together, but there doesn’t really have to be. This feels more like an anthology or a TV show of sorts, where each time you play, it keeps the same general themes and style but tells different, unconnected stories with each mission and playthrough.

As a side note about the use of Japanese culture and vaporwave aesthetics in a Western-developed game, World of Horror largely falls in line with many of the tropes innate to the style, which may be a turnoff for some since it often showcases some of the more superficial elements of the culture through a Western lens or appropriation. Though, it’s hard to draw a line to say it feels intrusive or harmful when the whole point of this project is to pay homage to multiple genres and styles. 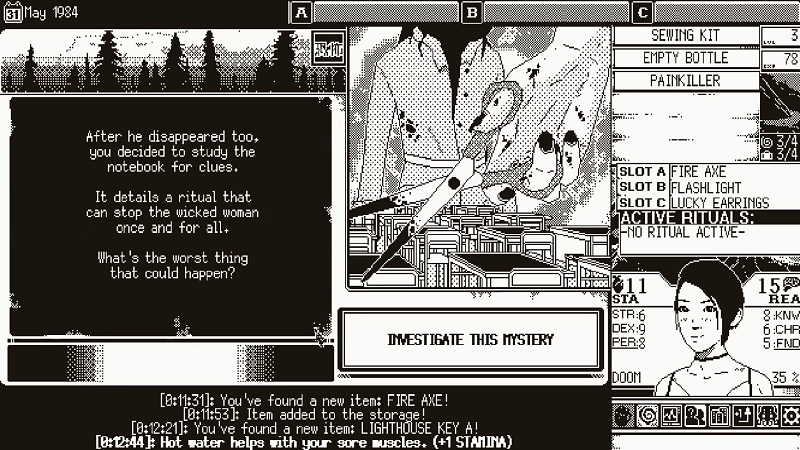 That said, most of the visual elements here consist of top-notch pixel art that manages to be unnerving and creepy at every turn. There is a very Lovecraftian sense of unease present in every event, and even a few well-implemented jump-scares here and there. This definitely keeps the tension and dread levels high throughout, which is important for a game with a title like World of Horror.

Along with the visuals being creepy, it’s chock full of the previously mentioned references to other horror properties, which are often done in a fairly light-hearted manner. The shout-outs to other titles always made me smile when they popped up. The list of references that I’ve encountered so far in my many playthroughs spans a wide range, from Resident Evil 4, Blair Witch, Puppet Combo games, and several others, to the very frequent Junji Ito and Lovecraft references. 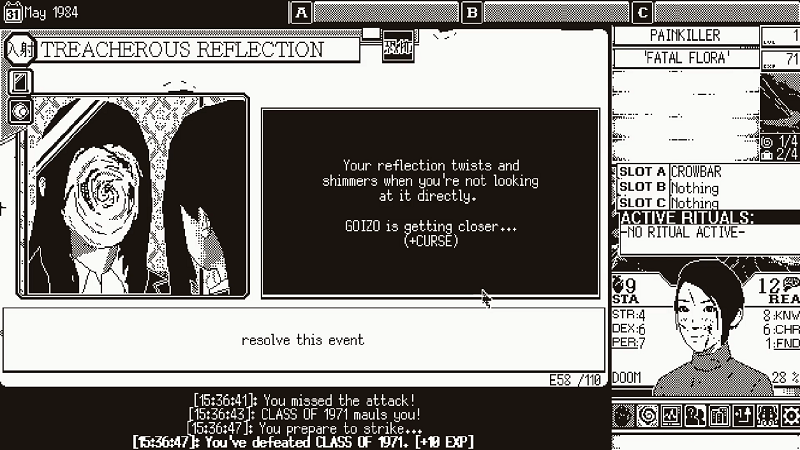 Each playthrough ends up being under 1-1.5 hours or so to finish, as the game is meant to be played over from start to finish many times to experience all the different events and endings. It does contain an index of all the events and endings you’ve encountered through your various playthroughs, as well as in-game achievements that can unlock more characters and items to use on your journeys, which is a nice touch. I personally played through the game well over a dozen times, making sure to experience all of the different mysteries at least once and get a wide variety of events and experiences. I can definitely say I enjoyed the vast majority of the time I spent with World of Horror. 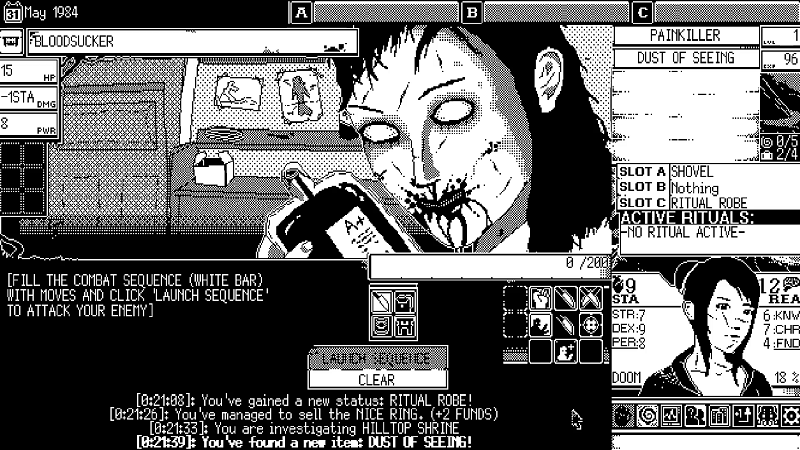 I would definitely recommend using the tutorials and easier difficulty when you first start out, which the game itself encourages, as well. This should help you to get a grasp on the gameplay loop, as well as unlock certain things that can help you on higher difficulties. Do this before jumping into the normal and higher difficulties where your adventure can end in the blink of an eye, forcing you to restart the whole game over one wrong move.

On a technical level, World of Horror definitely does have its share of downfalls, as I encountered a number of bugs and two full-stop crashes along the way. This was out of many hours of play, so it’s not terribly frequent, but can be frustrating when encountered. On top of this, the menus show options for controller support, but after trying a standard Xbox One controller as well as a DualShock 4, neither option actually worked properly. Instead, they caused the cursor to bug out and move in random directions, so you’ll be stuck with mouse control on this one for now. This isn’t really a game-breaking issue since mouse control arguably makes for a more authentic experience for what the game is trying to offer, but controller options can make the game more accessible and appealing if implemented properly. 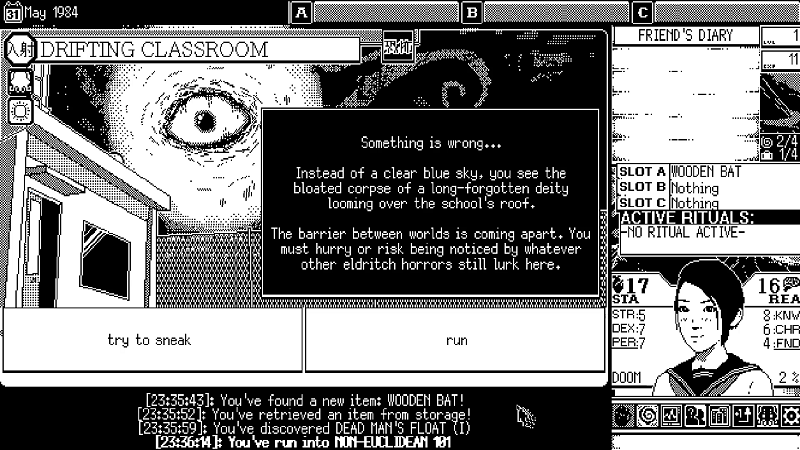 Overall, World of Horror has a lot to offer and shows a lot of promise, especially for fans of 1980s point-and-click adventure RPGs or those who are really into the 1980s Japanese aesthetics, though it’s not without its faults or shortcomings in its current early access state. I’d say this is definitely one to check out if you’re into the style of game or the art, but it’s definitely not for all types of players. The game could use some bug/crash cleanup as well as some various visual and performance updates, which it will hopefully get throughout the early access period. The developer estimates early access will last about 6 months. You can watch the trailer below to see if everything here looks to fit your personal style of horror gaming and check it out for yourself today.