Preview: What Lies Beneath and Within Frictional Games' SOMA - Rely on Horror

Preview: What Lies Beneath and Within Frictional Games’ SOMA 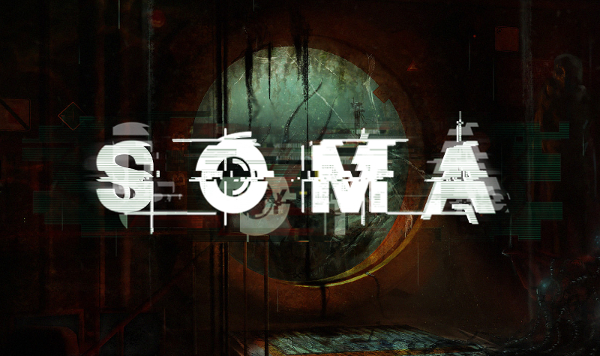 Frictional Games has been a creative force within the survival horror genre since 2006, with their first release being Penumbra: Overture. Over the course of nine years they’ve released three titles (plus a spinoff with The Chinese Room), each one further developing the studio’s skills in crafting quality horror experiences. Their most popular title, Amnesia: The Dark Descent, was a huge success for them, with YouTubers and streamers propelling the game into a “too scary to play” meme status – in tandem, word of mouth drove the game’s sales upward. Ostensibly, the success of The Dark Descent allowed Frictional Games to pursue higher ambitions and increase the scope of their latest game, SOMA – a sci-fi horror game set under the sea.

The preview build provided by Frictional Games is roughly 1/3 of the full game, beginning with the opening credits and ending on a cliffhanger part-way through. This time around Frictional Games has ramped up the amount of dialogue, with the game’s lead character Simon often talking out loud or to those he meets on his question-filled journey through an underwater structure. Simon’s backstory shall remain a secret, but it’s one that’s fairly surprising given what we’ve seen up until now of the game. 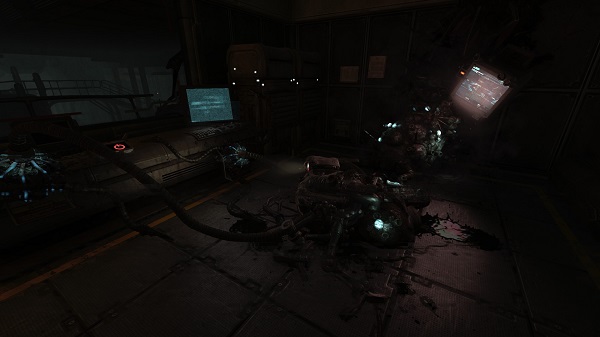 Leaving behind the gothic horror found in the last two Amnesia games, SOMA takes players into PATHOS-2, an advanced but failing research facility deep below the ocean’s surface. Science fiction is Frictional’s theme of choice this time around, with a heavy dose of existential horror fueling the narrative. What does it mean to be human? That’s the question players will be confronted with as they explore SOMA’s environment which is occupied by sentient robots and pulsating, living machines. One such robot is named Carl. I met Carl last month at E3 when I played a small demo for SOMA. He’s a likeable guy, and I accidentally tortured him.

But what’s the cause behind the game’s horrors? Frictional’s ARG and teaser videos alluded to what plagues PATHOS-2, and the first few hours of the game doesn’t reveal much more than that (I’m not spoiling anything not already out there). Essentially, machines have begun to take on the personas of living people. An AI system, while not sentient in the traditional sense, may be responsible. Somehow that AI and the network that connects the neural implants of PATHOS-2’s inhabitants became corrupted. Rampant and cancerous, feeding off of a substance called Structure Gell. Some of those people remained themselves, others presumably into the malformed and hostile organisms that pose a threat to Simon.

Whereas the Amnesia games held dialogue to a minimum, SOMA’s cast is much more conversational. There’s one scene where Carl argues with Simon about his state of being; Carl doesn’t realize he’s a robot, and he becomes disgruntled being told so. It was amusing until I accidentally made him scream in pain by shutting off the power in his room. 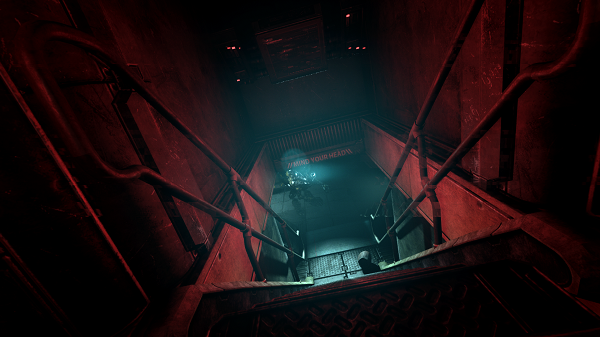 Now, I wouldn’t say that the voice acting is bad in SOMA, it’s far from it, but the tone feels off in contrast to the horrors that Simon and his acquaintances are experiencing. It’s almost too conversational. I wondered if this would ring true after meeting Carl during my E3 demo, and based on this preview I still feel the same way. Simon goes on to meet another character and their exchanges didn’t match what I thought would be appropriate for the gravity of the situation they’re both in.

I wouldn’t call this an actual negative, though; I guess I was just expecting more subdued characters and performances. I can’t exactly attest to the game’s narrative as a whole and how effective it will be based on what’s available in the preview build. For all I know, SOMA’s cast and narrative may become more dour as the story unfolds and their questions receive unpleasant answers. 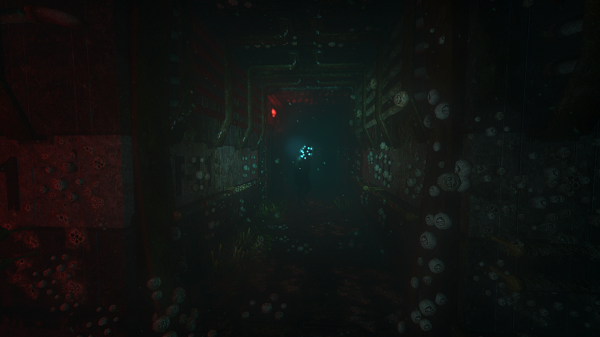 As for how the game looks, SOMA isn’t going to require you to break the bank on hardware. It’s visually superior to Frictional’s past games, but it’s the art direction that’s worth appreciating. Close quarter science fiction inspired environments run the risk of repetitive design and similar-looking hallways and rooms. Thankfully this is avoided here. SOMA’s facility is home to gross mechanisms and dilapidated halls enriched by a cool and deep color palette. You get a real sense that the ocean, as well as whatever alien threat has appeared, is claiming the manmade structure. There are many barnacles peppering walls also matted in algae, with blue veins formed by the foreign invader, creating unpleasant colonies sure to trigger anyone with Trypophobia. It’s great.

PATHOS-2 is a facility split into multiple divisions, with areas dedicated to mining materials, research, recreation and so forth. One such location I visited included a flooded, derelict ship. Simon won’t be limited to interiors as he’s cast out to the ocean floor on several occasions, left to navigate the murky depths in search of his next objective.

Environments are truly brought to life with exceptional sound design; SOMA has some of the best ambient sounds I’ve heard in a horror game in a quite a while. Vague clanking in the distance, rhythmic water droplets than can be misconstrued as footsteps, digitized, corrupt audio from mechanical monsters – it’s horrifically intoxicating. As a fan of industrial and similar genre music, my ears were happy to hear some quality angry-robot noises mixed. SOMA does a fantastic job of immersing you in its atmosphere.

I played the entirety of the preview build with my surround sound headset (I highly recommended surround sound for horror fans), and I must say that it would be a great disservice to the audio design to play this game in simple stereo sound. 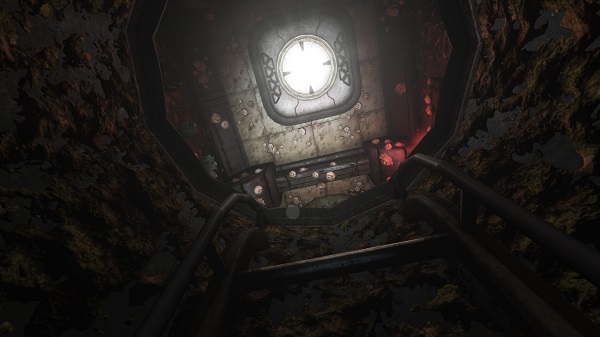 Like its predecessors before it, SOMA is a game about flight, not fight. Stealth must be used to avoid threats – crouch-walking to reduce the sound of movement when passing hostiles, hiding behind structures to avoid being seen, etc. Hostiles in SOMA will shamble their way around an area muttering in a strange, robotic gurgle. The closer Simon is to them the more his vision distorts. Simon can withstand at minimum two hits from hostiles, getting knocked to the floor to slowly regain sight but gaining blurred vision and a limp. Simon can heal himself by touching veiny, puckered, sucker-thingies mounted to walls. Post-healing they’ll often emit an EMP, or something similar, that causes a stir in the room. At first Simon just needs to touch these things to heal, but as the game progresses they begin to take his whole fist into themselves. It’s … something.

The enemy encounter formula doesn’t feel much different from that of the last two Amnesia games – I find it more similar to A Machine for Pigs actually due to the scripted design of the encounters in this portion of the game – but it still remains effective in creating unnerving scenes. A plus being the monsters’ appearances remain ambiguous due to a marriage of on-screen effects, leaving my warped imagination to fill in the blanks.

In my time with the game, I had to solve a handful of light puzzles that involved me interacting with computers and some machinery, nothing complex just yet. Simon can delve into documents and a strange form of remnant memories found while exploring; these moments give some context to what happened in the facility, but they are merely pieces to a puzzle that won’t be solved until I have access to the full game. It’s also possible to miss some documents as I left an area that got closed off before I could log into a computer terminal as one of the deceased workers. Frictional is keeping the game’s story close to its chest, and I doubt anything is as it seems based on my 3 hours of play.

There were also a few times where I felt some situations in the game are going to affect the game’s ending; there are subtle options presented to Simon, such as leaving a person connected to what amounts to life support, or unplugging them. Or even deciding to send an email. 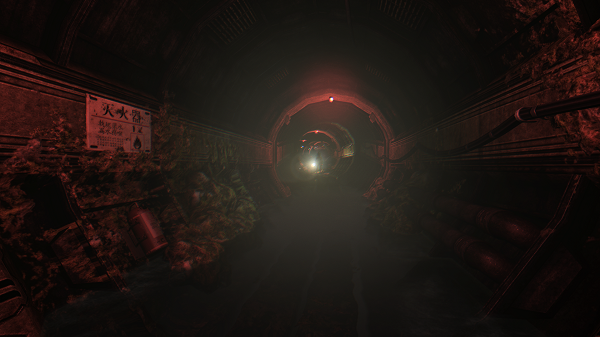 Some people argue that the word fun shouldn’t be used when describing the appreciation of media meant to sadden or scare you, but I can’t say I didn’t have fun when playing SOMA. While the preview wasn’t long enough for me to get a solid feel for the game’s existential horror theme, I enjoyed every moment. The build did have a few performance rough patches near the end, but I’m sure they will get ironed out between now and release. And I do wonder how SOMA’s characters will grow throughout the remainder of the game; they’re more personable, but almost to my distaste. I have faith though.

In the end, with the release of the final game, I believe Frictional will once again bestow upon the horror genre a gem like they did with Amnesia: The Dark Descent. I had only but a taste of what SOMA has to offer, and I’m hungry for more.