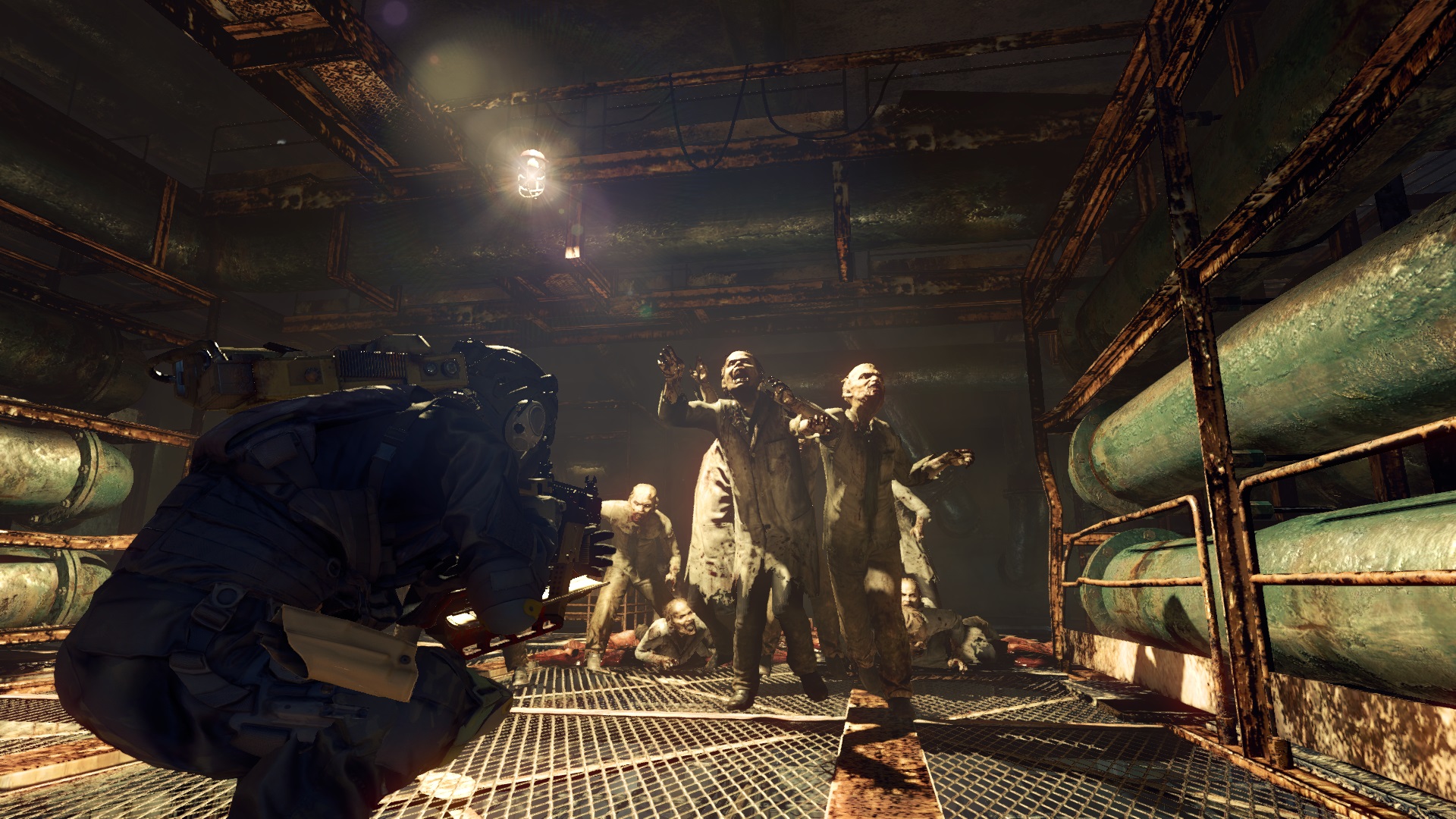 Umbrella Corps was pretty fun. There, I said it.

At NYCC this past weekend, I spent some time playing a few rounds of Umbrella Corps, the new multiplayer focused spin-off title that’s been causing quite a stir among Resident Evil fans, especially after being announced as one of the series’ celebratory anniversary games for next year. I reserved judgment until I got my own hands on it. So now that I’ve spent a good 30 minutes or so with the game, here are my thoughts.

The one mode that was available to play on the show-floor was One Life Match, which was perfect for a convention thanks to its quick pace. Two teams of three go at it against each other in a zombie-filled facility. The zombies here definitely come in handy in ways that can prove to be quite strategic. I always found myself moving with a pack of zombies, concealing myself in the middle of them. This is possible thanks to the zombie jammer, which is my favorite feature in the game.

The zombie jammer is a backpack-like device that prevents zombies around you from attacking you. But if it gets shot and destroyed by someone on the enemy team, then, well, you’re screwed. All zombies around you become aware that you’re a walking pile of food for them, and you can no longer use them as cover. This adds a great layer of strategy to each match. You can choose to directly shoot down a human opponent to kill them, or just destroy their zombie jammer and watch the undead do all the work, causing a distraction at the same time since the victim’s team members will likely be trying to help get the zombies off of him or her. 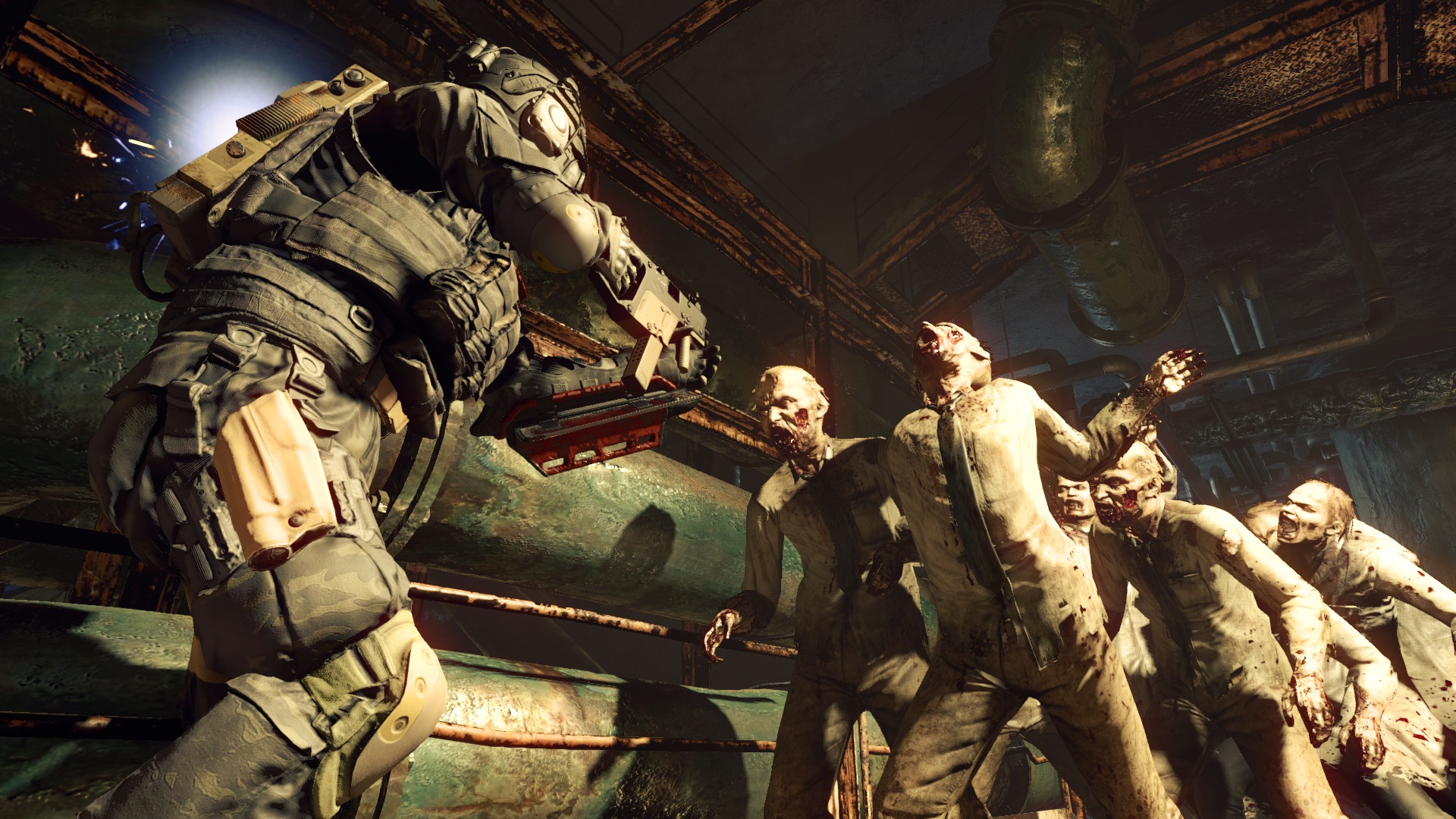 The game controls smoothly for the most part. But the cover system was a little iffy for me. You can basically take cover behind any wall or appropriate structure that’s marked with an indicator. But something about the system just didn’t feel completely fluid. Crouching and crawling around, on the other hand, was really satisfying. And I found myself taking that approach as I moved along with packs of zombies for some added stealth. As much hate as the game gets, I still think Resident Evil 6 controlled better overall, though, as far as an action-oriented third person shooter goes. So I’m surprised they didn’t just translate that gameplay system here in its entirety, with added tweaks (no footsies here!). Unfortunately, I didn’t get to try out the brainer, which is the axe weapon that’s been shown off. I’ll definitely make sure to do so next time I get my hands on the game.

The visuals aren’t anything special, but they’re good enough for what this game is. Some of the zombies look a little bland, and I did notice some blemishes here and there. The highlight of my minor concerns with the game’s technical feats came when I saw a couple of zombies crawling a few feet above the ground. Having said that, I still enjoyed my time with the demo.

I’m excited to see which creatures they will use from the classic games here. Adding monsters like, say, Mr. X or Nemesis can definitely add another layer of tension and strategy into the mix, especially if the zombie jammer can somehow be upgraded to also prevent the bigger monsters from hurting you. And I can already picture fighting in a map with a horde of lickers crawling around.