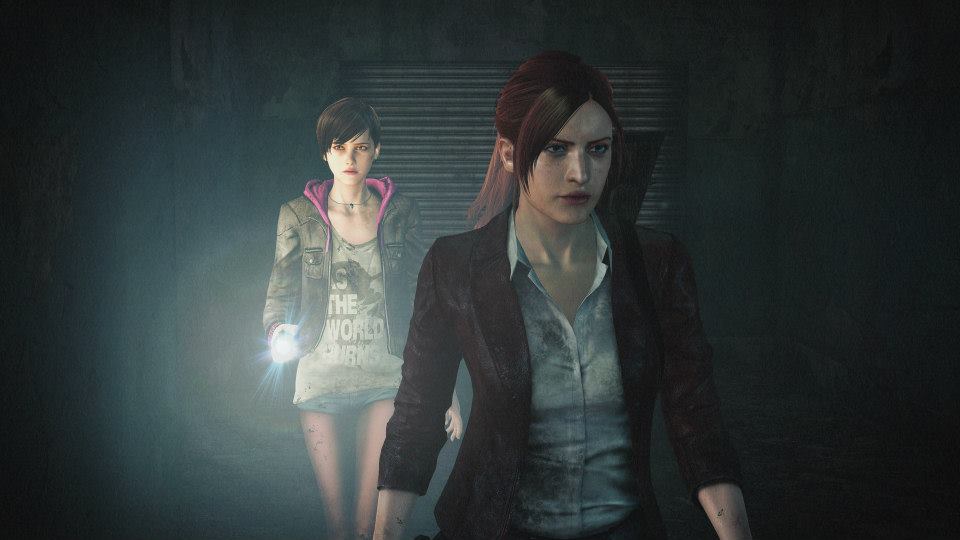 At NYCC 2014 a couple of weeks ago, I got a chance to go hands on with a slice of the first episode (of four) of Resident Evil Revelations 2. Here are my thoughts on my time spent with the game along with why I think it’s shaping up to be a promising entry that will not only cater to fans of the series’ modern style, but also longtime fans yearning for classic survival horror.

Right from the very beginning, we’re pit in a situation that will seem very familiar to fans, especially those who’ve played CODE: Veronica. Claire finds herself in a prison cell, with no recollection of how she got there. This happened during a welcome party TerraSave was throwing for their newest recruit, Moira Burton. Yes, I said Burton.

You quickly meet up with Barry’s daughter and get her out of the cell she’s also found herself in. What’s interesting is that both ladies have a particular wristband on. While it didn’t affect the gameplay found in this demo build, the wristbands actually measure the character’s level of fear, as confirmed by the voice of the woman that’s placed Claire and Moira in this horrifying scenario stuck in an isolated island in the middle of God knows where. 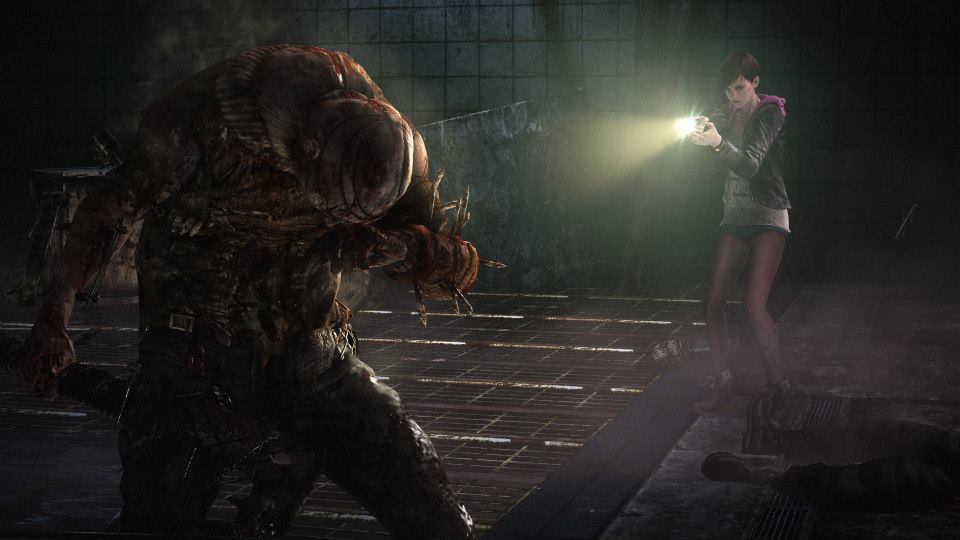 After some exploration, you come across a handgun found on a (you guessed it) dead body. This brings up an interesting exchange of dialogue where we learn that Moira refuses to use a firearm due to a tragic event that happened in her past. During my interview with the game’s producer, I was told that this would be a major plot point in the game, and that the Burton family will also be a crucial pillar of the story. But that doesn’t mean Moira will be unarmed. She gets to use a nifty crowbar and a flashlight!

Moira is essentially a better version of Revelations’ genesis scanner, albeit personified. After being granted the ability to seamlessly swap between characters, you’ll get to try out Moira’s abilities. With her flashlight she’s able to shine light on places in the environment that hide ammunition and health supplies, as well as other items that you’ll need. This then lets Claire pick them up once you swap back to her. I love this method of cooperative play and it even makes co-op a thing single players can enjoy. The flashlight could also be used on the enemies (which we’ll get to in a bit) by temporarily blinding them, leaving them open to shots from Claire. Oh, and that crowbar allows you to pull off some awesome finishers on downed foes, too.

At first, I wasn’t that intrigued by the enemies judging by screenshots. I honestly saw them as pretty boring, especially when compared to some of the memorable baddies we’ve been graced with in the series. The Afflicted have been detailed as being non-infected people that have basically been driven insane. Seems fairly typical, right? Well, I was pleasantly surprised to find that they injected me with a level of fear I really wasn’t expecting. They behave like crimson heads in a way, and are pretty damn relentless. During my demo playthrough I found myself on the receiving end of some significant damage at their hands. They were faster than I was expecting when in close proximity, and they could take quite a few bullets before being offed for good. Being swarmed by them won’t be a pleasant scenario by any means, and that’s pretty much how you’re introduced to them. It was an exhilarating moment that allowed me to really put the game’s mechanics to the test. 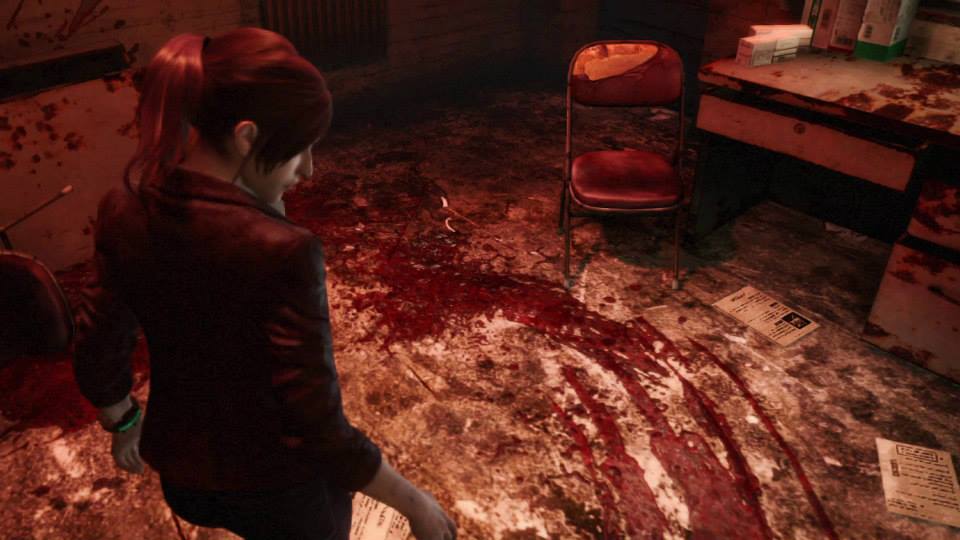 Shooting works how it has since Resident Evil 4, though with Resident Evil 6’s enhancements. You could move and shoot, and Claire has a heightened level of mobility that feels really good, making the combat feel a little faster but still satisfying. You could still slash away at foes with your knife (though I wouldn’t recommend it) and you could perform a powerful kick up close after stunning them. Something that makes its debut in the series with this game is stealth mechanics, specifically the ability to crouch. This opens up a new avenue for gameplay, one that’s inspired by recent horror titles that encourage stealth over gunplay,  but I’ll admit that I…failed horribly trying to use stealth on the enemies in the demo. I tried!

Now on to the big question on everyone’s mind: is the game actually focused on survival horror? The answer to that is a resounding “yes” based on what I played. While the game does flirt with the series’ action focused entries in regards to mechanics, Revelations 2 does show that the developers have made it a mission to bring back that horror feel. The prison you go through oozes with a dreadful atmosphere. And while we’ve already been in a prison setting before, I really love how much more gruesome and uninviting this one looks. It certainly has a Saw-like vibe to it, which can also be applied to the sadistic game Claire and Moira have found themselves in thanks to an unknown female villain. It’s like the perfect slasher film set up! The enemies also ensure that you’ll always be kept on edge, especially when they come jumping at you from out of nowhere. Their design is also pretty unsettling, which is always a plus and a definite step up from the Ooze.

The negatives I have to point out are minimal. As expected from the game’s cross-gen nature (and lower price point), the visuals aren’t really anything special. They’re not bad by any means, but it’s not the next step up in visual fidelity that we’ve been accustomed to seeing with each major Resident Evil release. Another thing that irked me was that enemies don’t bleed out when dead. A blood puddle under the body would usually confirm an enemy’s death, but in Revelations 2 that isn’t the case. Maybe this is something that just wasn’t present in the build I played, but I would really love that visual confirmation of death to remain. And while I had no problem with it at all, I can see some people getting a little annoyed by Moira’s method of expressing herself. She has quite a colorful and creative vocabulary! One last thing worth noting is the new voice actress for Claire. Judging from her limited dialogue in the demo, I actually liked the beloved heroine’s new voice and didn’t really mind the change.

Resident Evil Revelations 2 is shaping up to be the game fans have been asking for. From what I played, I can already tell you that it’ll wash away the bad taste Resident Evil 6 left in the mouths of many. It’s amazing to see Claire back and it’s even better that her return happens to be in a title that also brings back the series’ horror elements.