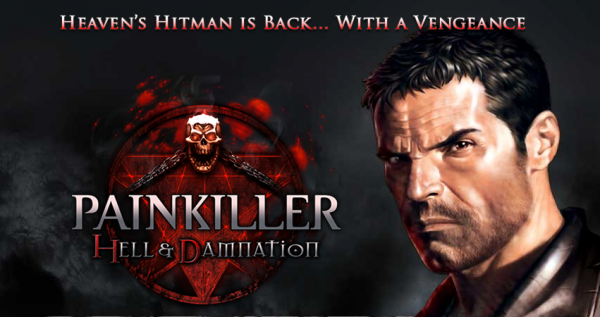 Heaven’s Hitman is back. Painkiller: Hell and Damnation is billed as a top to bottom remake of the 2004 shooter. In production by Nordic Games and The Farm 51, the title is currently in closed beta. I went hands on with the beta for a few days.

To the point, the plot of Painkiller is…um…brief. When I fired the demo up, there was no mention of any of it whatsoever. For those unfamiliar with the series, the game revolves around Daniel Garner and his wife Catherine. The married couple are headed out to dinner when tragedy strikes in the form of an automobile collision. Both of them are killed, however Catherine makes it to Heaven, while Daniel must purify his soul by killing Lucifer’s generals in order to prevent a war between the heavenly bodies. Specifically Heaven and Hell.

Painkiller: Hell and Damnation, much like the other Painkiller titles is an arcade-type first-person shooter. There is a small exploration component, but it’s not very substantial. The bulk of the game is ‘shoot some stuff, run around, and shoot some more stuff.’ During the two maps available in the beta, the Cemetery and the Train Station, I did this to the best of my capabilities. It was fun and simplistic – a great way to hammer out some stress at the end of a long work day.

I found that those two environments were pretty detailed and diverse, but exploration was particularly limited. Small sections of the map would open and allow you to run amok, shooting demons, desecrating tombstones (at the cemetery) and finding collectibles.  Each level brings with it a new set of things to find, with new enemies, weapons and items to collect.

Hell and Damnation gives you a variety of weapons to bring down demons with, from the traditional shotguns and the like to a freeze gun, to a gun that sucks the souls out of enemies and pits them against one another.  Each of the guns (aside from the soul-sucker gun) has a limited set of ammo, but no reload animations.  Which is particularly nice, considering the fact that at any given moment, you could be surrounded by a dozen enemies.  And a dozen is a conservative number. 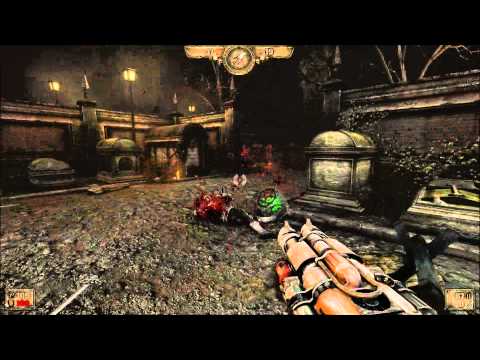 In the unfinished beta phase, the graphics were decent, but didn’t blow me away.  While the environments were detailed, overall the game isn’t on the same graphics playing field as what the original Painkiller was.  I experienced a few collision detection issues and found some flickering issues, all normal things from a beta and they will more than likely be worked out by the time the game releases.  However my biggest complaint is something that many people may not ever have any issues with whatsoever.

The game made me extremely nauseous. The head-bobbing, the dozens of enemies on screen at once became too much for me. If you ever experience these kinds of issues while playing games, you’ll definitely experience them with Hell and Damnation.

Hell and Damnation is challenging, but rewards you at the end of each level. Cash in gold pieces collected by defeating enemies and shooting stuff during the level on tarot cards, which offer bonuses such as reduced damage, slow motion abilities, etc. Due to my limited beta, I wasn’t able to see what all the abilities were like, unfortunately.

In addition to being a complete remake of the original Painkiller title, Hell and Damnation will also feature levels from the Battle Out of Hell expansion, such as the Loony Amusement Park.  Additionally, the entire single-player campaign will also be available in two-player co-op, either locally or online.  The multiplayer component also has a Deathmatch and Team Deathmatch mode.

The game is set to release later this fall, but no official release date has been announced.   More information should be cropping up about the release soon, and you know we’ll be bringing you the news as soon as it becomes available.  You can pre-order the game from the Painkiller website, or through Steam.