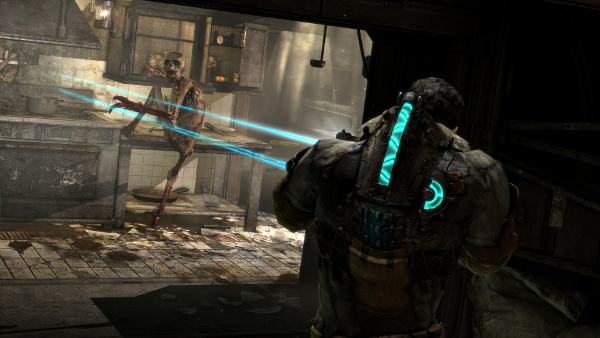 Dead Space 3 is Visceral Games’ fourth entry in their relatively young horror series. Starting on this current console generation, Dead Space revived the dormant survival horror genre with its dark, futuristic setting, tension building pace, and of course its mutilated alien horde: the necromorphs. With the release of Dead Space 2, the series took on more instances of fast paced gameplay and action oriented events. Despite this, I still enjoyed Dead Space 2 for its gameplay, horror setting, and its copious amounts of gore.

With the announcement of Dead Space 3 and its newly added co-op, cover system, and human enemies, fans became worried that their survival horror series was going full on action. But Visceral does not want to give that impression. That is why a new demo was prepared for the press. One that focused on the core gameplay and roots of the franchise. 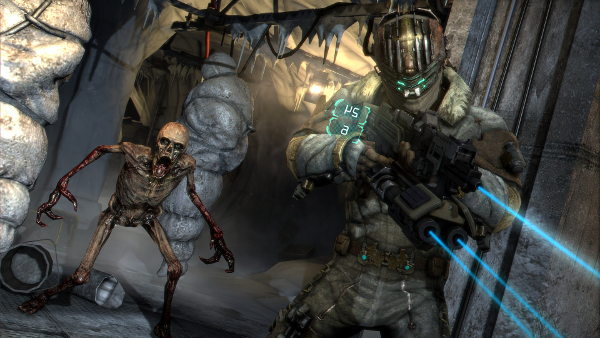 For my preview, I was greeted with a new segment of the upcoming game. Unlike the E3 demo which was more flashy and action oriented, the demo I was given to play was rooted in the survival horror aspects of the series that fans have come to enjoy—a sense of isolation, slow paced gameplay, and foreboding environments.

The demo starts sometime early into the campaign. Isaac Clarke has boarded CMS Greely–a 200 year old vessel that was once filled with scientific experiments and studies. The ship lies in the orbit of Tau Volantis, the icy planet that is the setting of Dead Space 3‘s campaign. While not available in the demo, I was told that the ship will be filled with the usual notes and files that give players some story bits as to what had happened to the crew. I wasn’t told much about the story or the intent of the ships’ crew, but I was told that Isaac believes the ship may be involved with the arrival of the necromorphs. 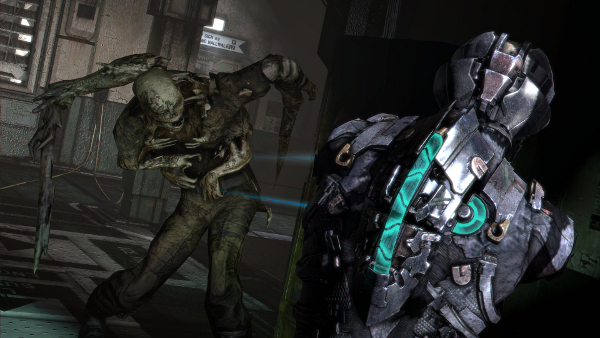 When I was given control of the demo, I was talked through the added mechanics and moves given to our protagonist Isaac. Isaac can now roll left, right, forward, and back to evade enemy attack. Despite wearing a combat suit–a dirty and battered version of the one seen in Dead Space 2–Isaac has a new found agility. Another added move was the ability to crouch. The crouch move can be used behind cover but will not lock-on unlike some cover-based 3rd person shooters. I was told that there is no lock-on, because the team is not trying to make “that kind of game”.

Among the new moves was also a larger use for the kinesis power. Some doors and mechanisms will require the use of kinesis as apposed to Isaac’s usual interaction. This leads to some confusions that I had down the line in the demo, but I’ll address that later in this preview. 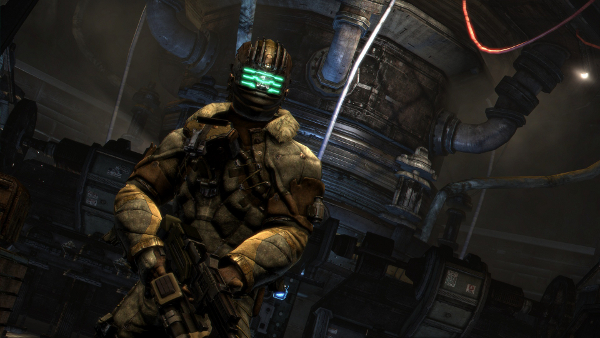 The particular mission that I was playing was not a mandatory one. Dead Space 3 has introduced sidemissions into the series. Players can choose to explore more of the story with these missions. In co-op, it is said that exclusive sidemissions will open up in which both Isaac and John can complete. Santos, Isaac’s new contact, guided him and laid out his mission objectives. Here’s hoping Isaac’s luck with women does not repeat itself.

The demo was the typical survival horror feel. The rusted walls of the derelict ship creaked and moaned under the pressures of empty space. Surrounding the ship was all matter of debris and other explorable areas (which was not available to explore in the demo). The interior of this science vessel hinted at a gruesome past event that led to the death of many on board. The lighting, as usual, was very complimentary to the game’s sound. In tandem, the two create that expected atmosphere that one comes to expect from Dead Space‘s classic survival horror segments. 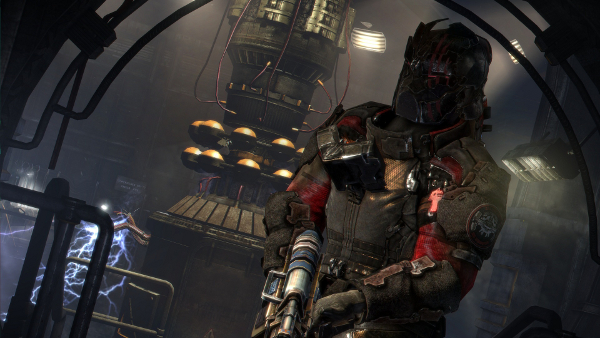 The demo played much like Dead Space 2 in the terms of fluidity and control. Isaac’s movement felt very fluid and polished, perhaps even faster than he has been in the past. The game’s graphics also appeared to be top notch and were very nice, albeit a little bright for my taste. One tiny, feature to Isaac’s gear is that in instances of the right lighting, Isaac’s visor provides light in the shape of, well, his visor. It’s a neat little thing that I chuckled about. It can probably be used as a small source of light when players are not aiming their weapons’ own light source. The visor did the same in Dead Space 2, but it’s much more prominent this time.

As Isaac, I went through the ship’s various rooms without so much as a few sounds in the environment. It took a few minutes for me to meet my first batch of enemies. The standard enemy types were present, including Dead Space 2‘s Puker. There were Lurkers and Slashers as well. I must admit, I did feel a bit disappointed with the creature spawners. After playing Dead Space and Dead Space 2, enemy spawns are ridiculously predictable. Whether it’s a vent on the ceiling or wall, myself and a lot of players of Dead Space already know where to look and expect enemies to come from. I am hoping Visceral knows this and have taken steps to add some variety to how enemies spawn into the environment. 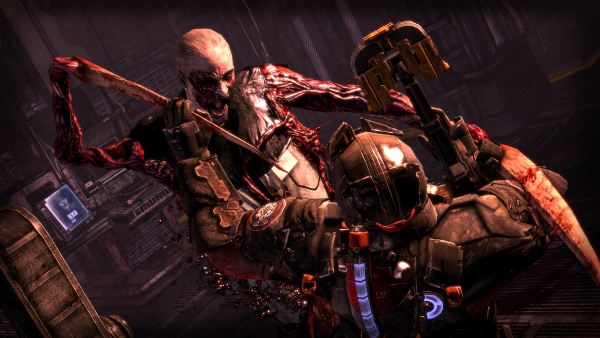 One new enemy type made it into my demo, and man were they mean little bastards. Remember the little bugs that sometimes crawl out of the fat Pregnants? Well, now they venture without their mother and like to ravage and transform corpses into necromorphs. They move extremely fast and were actually able to freak me out a bit. They were perhaps my favorite part of the demo.

I mentioned before that Isaac can use his kinesis to open doors and manipulate mechanisms. I found myself a bit confused when interacting with things in the environment. Mechanisms that require kinesis often glow light blue. This has been present in the past games but due to increased use of kinesis, I found myself trying to interact with item pods and other things via the wrong action. It was a bit confusing, but I’m not sure if it was the fault of the game or my own learning curve to this addition

Later on in the demo, I was tasked with extracting an item from one of the ship’s machines, In order to do so, I had to manipulate a pressure valve system. This was a puzzle. Dead Space 3 has puzzles. Unlike the previous games, this was more than a fetch and plug-in puzzle. This required the right pressure values to be assigned to different parts of the machine. Increments of fifteen points had to be allocated between pressure valves. The inclusion of real puzzles was a big surprise coming from a game that has many people worried about its commitment to the survival horror genre. 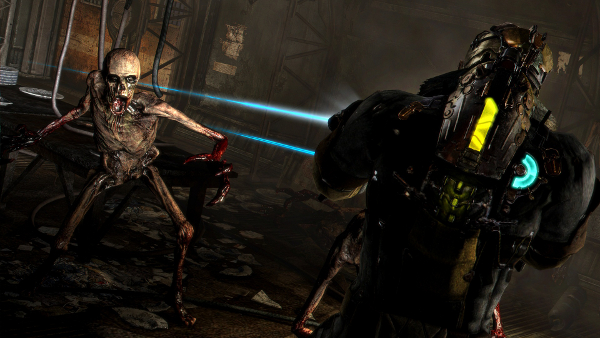 My time with Dead Space 3 was a bit short, but it gave me a good idea of what to expect from the game. Just as with Dead Space 2, Visceral wants to reassure and keep their survival horror audience by continuing to provide the elements we so crave. While I do think in the end that the gameplay scale might favor action horror over survival horror, I’m feeling confident in the quality of the game. I think it will undeniably be a bloody good time as long as Visceral keeps to their promises.