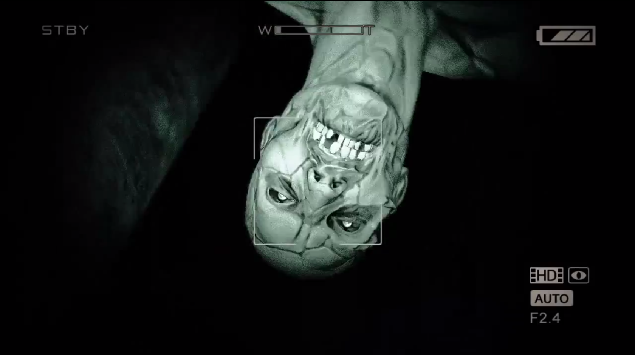 By this point in time, if you’ve had your eye on Outlast then you’re probably already playing it. CJ gave quite a favorable review, and I can’t wait to dig into it myself further. This year at PAX Prime 2013 I got the chance to go hands on with it and speak with Outlast‘s creative director David Chateauneuf about the game and how Red Barrels approached horror.

So where did the initial idea for Outlast come from and what drew Red Barrels to the horror genre?

Outlast really came from Phillip and myself coming from Ubisoft and we already wanted to do a horror game. We’d never done that before and it’s just so intense and so many emotions involved in these types of games. We thought it would be so cool to make a game like that, and it’s been my dream to make a horror movie, but game development is obviously our thing. So we moved from company to company getting experience, and Outlast came out of that idea of wanting to do a horror game because it’s just so fun. At the same time we were thinking what it is people like about horror, and we just saw that there was so many action games. That’s normal because big companies want to make money out of it, and in order to get money it has to be action so more people can play it. However there’s always a niche of players like me that want to play horror games. So we thought let’s do a game for ourselves first and we’ll see how people react to it later.

So Outlast came out of all of those things combined. There was also some influence from an indie horror movie by Chris Hunnigan that utilized night vision. Our art director that also came from Ubisoft and had worked on games like the original Splinter Cell, so we already had people with experience with night vision in games.

Again though it’s all passion from us (Red barrels) on Outlast. People think it’s all about money. That’s not true though, we know how to make AAA games, that’s what we did at Ubisoft and EA. Those companies are great and there’s a lot of opportunity there, and actually my salary was much higher there. I think though in order to make truly great games that you need passion, and that’s what we have now.

So expanding on that, was it also purely a passion thing to move towards Indie development?

Definitely,  we took a lot of risks and it took us 2 years to figure out how to build up the company. Firstly we were at EA and there was some management problems so we decided to go move out on our own. We brainstormed and ultimately decided “let’s just do what we do best”. So I was the horror guy, Philip has a bunch of potential and is an awesome game designer/creative director, and Hugo worked on Splinter Cell 1 and knew how to play with the light and the shadows.

We didn’t have any money though, so we tried to get a deal with Sony but things didn’t work out. So we decided to get some money from the government and make it happen.

Outlast is part of a new wave of Indie horror titles, what do you believe sets Outlast apart from it’s peers?

Well, I liked the idea of competition at first. It’s really not like that though! Indie developers help each other all the time. Just the other day I was speaking with Thomas from Frictional Games on Skype and getting feedback. So we’re really not trying to beat each other or anything. Each team is going for a different experience, like for example Amnesia is really all about the atmosphere. Outlast for us, is more about the ride to hell rather than actually experiencing hell. We have the same goals in that we want to scare players, but in different ways.

Outlast will also be coming to the PS4, is there going to be any notable differences between the PC and PS4 versions of the game?

We’ve talked about it a bunch and right now our goal is to just finish the game and get it out there. In time we may add extra content or whatever to the PS4 version, but I cannot say for sure right now. It’s been crazy just finishing up the PC version, so we may need to take a break soon!

Sony’s really been embracing indie developers, what’s the experience  been like working with them?

Since the beginning Sony has tried to help us a lot. At first when we were trying to get some money, they had a funding plan where they’d help any indie company by giving us a certain amount of money, but only if the game ships. So really liked their style! And even when we’d meet with them we’d start brainstorming together. Things changed over time and we didn’t end up taking that plan, but they told us they’d still love to work with us anytime. Sony is always really kind to us whenever we talk to them and I bet all the other indie developers that work with them would say the same.

You kind of mentioned this already, but was there ever any pressure to make Outlast more accessible and action oriented?

During the production process we certainly had our fights among the team. We all came from working on projects like Uncharted, Assassin’s Creed, and Splinter Cell Conviction. Some of us thought “oh it needs to be fast and action oriented”, but eventually we had to readjust the project over time. At some point we realized it wasn’t a really slow build like other games, it’s ok to be fast. Outlast is a very frantic chase experience, and we hope players are going to love it and love being scared.

Thanks again to David for giving me the chance to interview him on the show floor at PAX Prime!