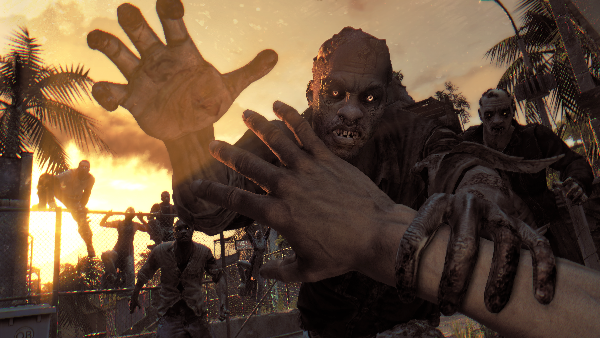 In 2011 developer Techland released the co-op tropical island zombie title, Dead Island. A game that received many mixed reactions among it players and the press. Well, Techland is back with their new game Dying Light, a game that looks to be everything Dead Island promised to be. I was very fortunate to go hands-on with the game at PAX Prime 2013, and I came away from it rather impressed by what I’d played.

For the behind-closed-doors demo I sat down with the game’s producer Tymon Smektala. Before jumping into the demo, I inquired about the development history of both Dead Island and Dying Light. It turns out that while the core team of the original Dead Island is working on Dying Light, the company has grown exponentially and is full of fresh minds working on this project. Also, despite Dying Light only having been revealed recently, the game has been well into development for over a year and a half.

On to the demo though, which was running on a high end PC with an Xbox One controller. The section I played through took place at an outpost in the fictional city of Harran. The outpost was walled off from the swarms of undead hordes that roamed the city outside. I played as one of the maintenance men at the outpost, tasked with the duty of venturing out into the wastes–checking various traps meant to keep zombies from getting inside the outpost.

First thing I’d noticed when picking up the game is how great the controls feel–which is quite important in a game like this where the world is so open and climbing is a big facet of the experience.  That openness coupled with the free running is what really sets Dying Light apart from Techland’s previous effort Dead Island. You’re able to scale various things in the environments much like in a game like Mirror’s Edge. I was really surprised just how much freedom there was with the climbing. I kept expecting to run into an invisible wall, or be unable to get to the top of a building. However, nearly every time I tried to break the game like that I was met with promised freedom. Eventually even Tymon realized what I was trying to do and thought it was pretty funny. 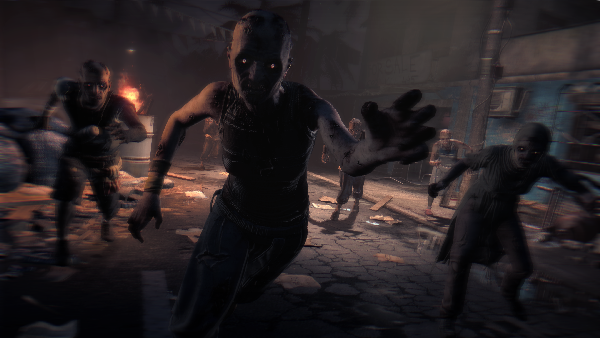 I eventually stopped screwing around and got back to my duty of checking the traps. Which ranged from electric fences placed on the ground to cars that will explode, all traps can be set off by the player while in close proximity to them remotely. So for example, if a bunch of zombies are chasing you and are able to run through one of the electric fence traps, a button prompt will pop up allowing you to turn the fences on and electrocute the undead assailants chasing you.

When you don’t have a trap at your disposal you can engage your foes in melee combat. In Dying Light you have two stamina meters, one for combat and one for endurance/running. You have to weigh your combat options carefully though, as a slip up or two may be the end of you. For the demo I had a wrench and an axe, the wrench being quick but not as effective and the axe being deadly but slow. Weapons can be charged up for heavier attacks similarly to melee combat in Skyrim. In the case of the axe for example, charging the weapon up allows you to 1-shot foes. It should also be mentioned that there are multiple enemy types within the game as well. I only ran into the standard zombies and a zombie that spit acid similarly to the spitter in Left 4 Dead, but Tymon told me there are many more enemy types beyond that.

I found that engaging numerous zombies at a time usually ended in death, so it’s best to draw a group of them away with a flare. Flares are items in game that you can light up and toss to draw zombies away, as they are attracted to the light.

As I was out setting and checking traps, I ran into a fellow that was stranded in a house surrounded by a small group of zombies. This event is part of Dying Light‘s dynamic events system, of which there are literally hundreds of. Basically, at random times while out exploring ,you can run into a dynamic event like this. In this instance I had to kill the zombies surrounding the house and let the poor soul out. After helping him out with his predicament, he rewarded me with extra supplies. The dynamic events system employ somewhat of a quest-like structure from an RPG, only you have to weigh the pros and cons of an encounter. In some instances the risks may not be worth the rewards as it were. 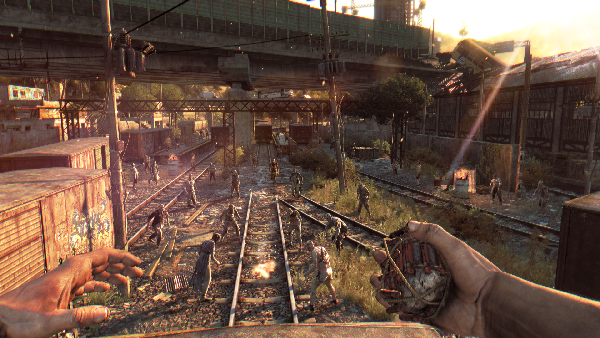 It should also be noted that Dying Light has a day and night cycle. During the day zombies can’t climb or scale obstacles and are generally far less aggressive. At night however, the zombies are far more active and will chase you up buildings that they normally can’t climb during the day. Nearing the end of the demo, after I’d checked all maiming traps, I had to make a mad dash for the outpost as it had turned from day to night. The number of the zombies had greatly increased, and it was far easier to draw their attention. It was pretty intense running from them, but amazingly I’d managed to make it back to the outpost in a single attempt. Tymon told me I was the first person at the show to actually make it through the night time section without dying too!

After the demo concluded, I spoke with Tymon a bit longer and clarified with Tymon that while this was a single player demo there will be four player drop-in drop-out co-op. Also if you pre-order the game you’ll receive the option to “be the zombie”. Where you’ll be able to play as a zombie and invade other people’s games. 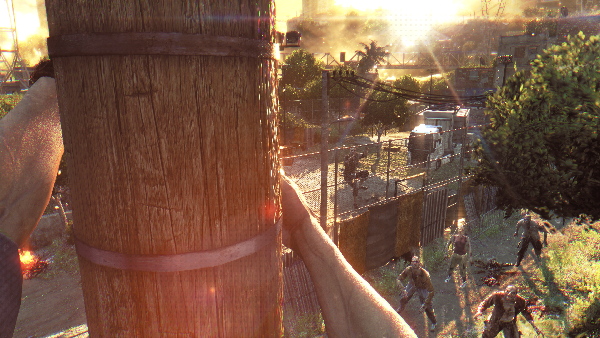 While the demo was of the next generation version, the game will also be available on current generation systems. With the only notable differences being that the next gen versions will look much better.

All in all I really enjoyed my time with Dying Light, and I wasn’t expecting much after the lukewarm reception Dead Island received. I truly believe people disappointed in that game will get exactly what they originally wanted in Dying Light.