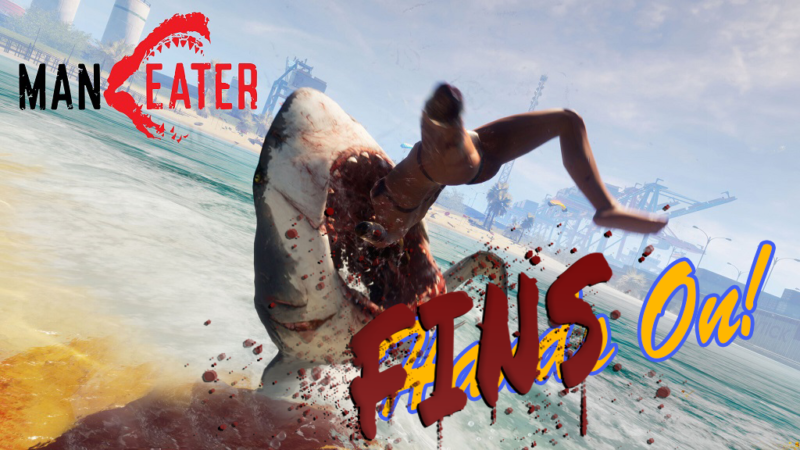 You may have recently seen when we talked about a new shark sim RPG called Maneater that was announced a few months ago, or maybe you’ve heard the buzz that’s building about the title on social media. Well, regardless of whether you’re familiar with it or not, we’re here to talk about (and show you) our hands-on time with this wonderfully gruesome and hilarious game. We played the first 30 minutes of Maneater at a press event last week, and we’ve also captured full-length video footage of those first 30 minutes that you can watch below. 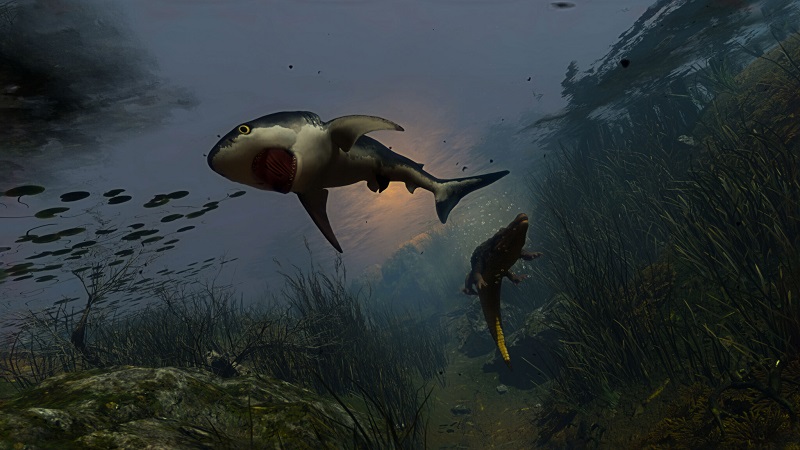 Coming from the studio behind the Killing Floor series, you’d expect some horror themes to be found in Maneater, and you’d definitely be correct. Though, while Maneater does feature gruesome kills, explosions, dismemberment, and all sorts of other carnage, it also takes a very humorous and tongue-in-cheek approach to it all. The story starts with your mother (a shark, obviously) murdered by a Reality TV-star fisherman, who then pulls you out of her womb before you are even born. To set the tone, you, as a baby shark, bite his hand off and throw it into the water as you escape his boat.

This sets up a feud between you and the arrogant fisherman, not unlike Jaws or Moby Dick, as you start to explore the sea on your own. The game features a heavy emphasis on criticism of reality TV in a way that’s quite funny but also makes for a really effective storytelling device on its own. 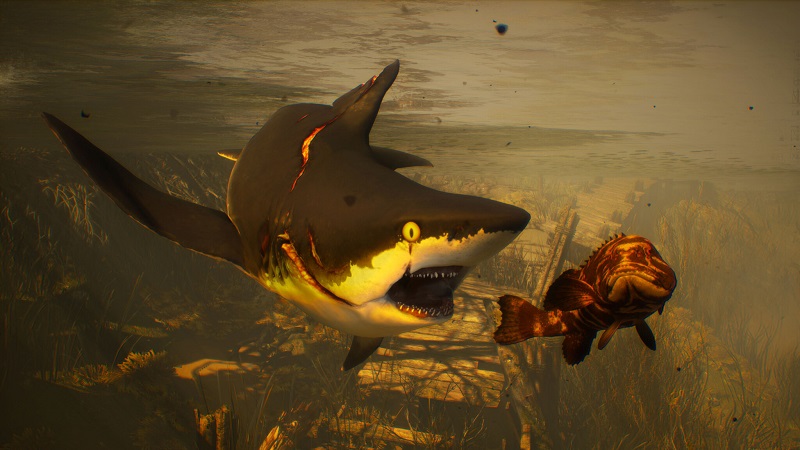 As you start to explore the sea, you work your way up the food chain by eating bigger and bigger animals and leveling up (yes, you level up a shark.) As you go, you learn new abilities for combat and movement, as well as open new areas of the water to explore. You can even upgrade your shark with “evolutions,” which add armor plating and special abilities. The more progress made, you’ll start to take over territories from underwater apex predators (bosses, basically) and eventually various human hunters from above the surface, inching towards your revenge on the one who killed your mother. 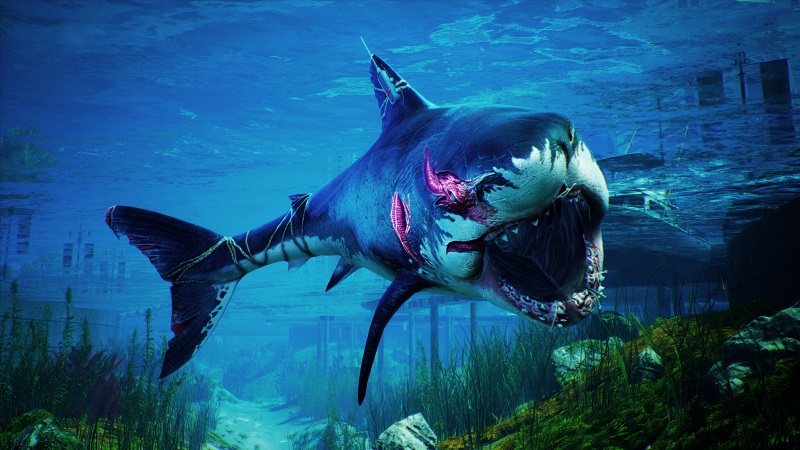 Maneater features an overarching narration from former Saturday Night Live comedian and actor, Chris Parnell, making it feel like a mockumentary in the style of Planet Earth or another serious nature documentary, with wry humor injected constantly throughout. In addition to the funny narration, the way it handles criticism of vapid reality television and glorification of silly TV personalities, in general, is on-point.

As for how the game actually plays, it’s an absolute joy to experience, as the devs have found a great balance between exploration and combat. Maneater features an open-world style game map, with various regions to explore and conquer, and a slick combat system that makes every encounter feel visceral and fresh, even when just eating smaller, less threatening animals in the sea. 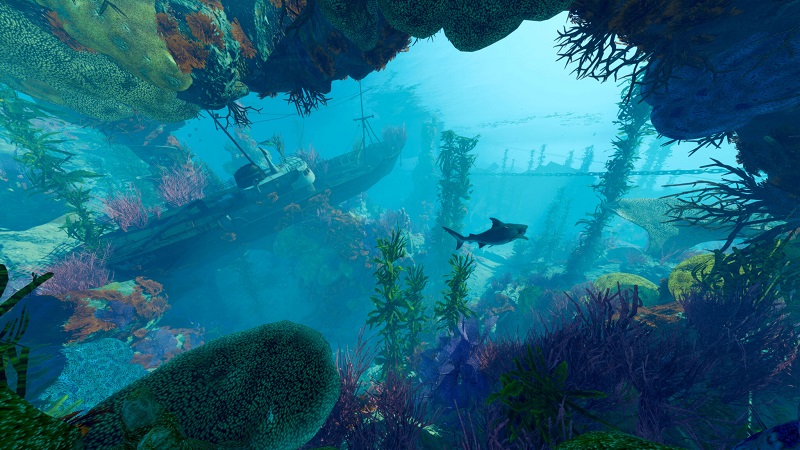 The controls for movement and combat feel tight and responsive, always feeling like you’re in complete control of the shark, even despite a shark’s natural disadvantage of not being able to make sharp 180 degree turns. You can even jump out of the water and do flips in mid-air if you so desire, and also take short trips up onto the land to flop around and further terrorize humans or grab special items until your air supply runs out (which is also upgradeable.)

The lush underwater environments are fun to navigate, as there are various missions, hidden items, and new landmarks to discover in each area you explore. This consistently gives you something to strive for, and a reason to be thorough with each new place you visit. 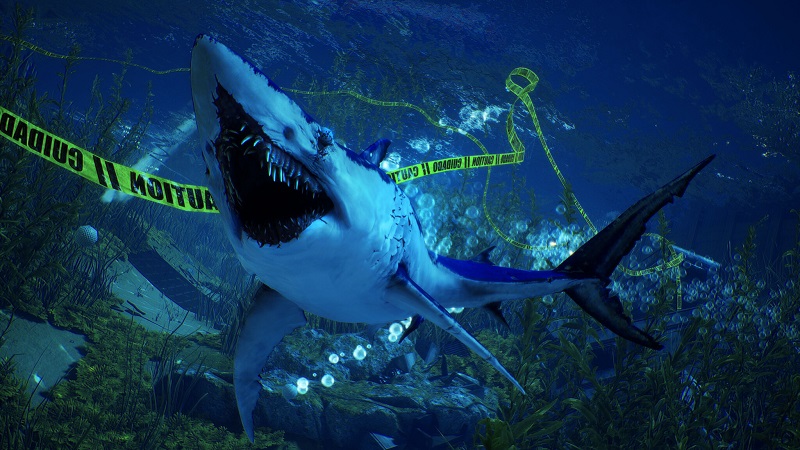 The combat in Maneater is consistently satisfying and is surprisingly diverse, even escalating into some deeper “Souls-like” combat that involves complex dodging and attack patterns against bigger enemies and bosses. When combating smaller adversaries, you can usually just stun them with a tail whip and start chomping away without much resistance, but depending where you are on the food chain, bigger enemies can also stun you and implement some deadly attacks.

For instance, as a young shark, an alligator can bite down on you and start thrashing and rolling, forcing you to struggle and escape, and human hunters can harpoon you from their boat and start reeling you in, limiting your movement and allowing their gunners to get easier hits on you. Every type of encounter has a different flow of combat and rules of engagement, making your time on the sea constantly diverse and exciting.

After checking this out for myself, I can easily say that Maneater is now one of my most anticipated games of 2020 (up there with Resident Evil 3 and Remothered 2) and I can’t wait to get my hands on the full game as we near the May 20th release date. You can watch my whole playthrough above to see the game’s chummy charm in action for yourself. Stay tuned for more coverage once the full game is released on PC, Xbox One, and PlayStation 4, with a Switch release planned for later in the year.