Lost Planet 3 – What we know so far 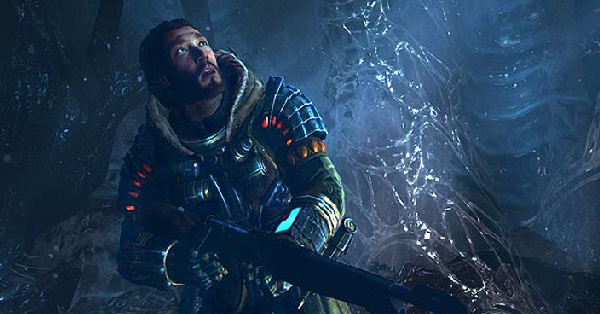 Around a year or so ago, Capcom announced the third entry to the super-fun, StarShip Troopers meets Bionic Commando series, Lost Planet. The franchise has dabbled between being a Monster Hunter style game, and a full-blown co-op action fest, borrowing influences from other games like Gears of War 2 and Resident Evil 5. The second game’s tagline was “Kill BIG“, inspiring a sort of epic monster safari. However, when Lost Planet 3 was announced, Capcom made it very clear that the third installment had chosen to take inspiration elsewhere, mainly survival horror games- sighting Dead Space as one of them.

Being a prequel, ala Metal Gear Solid 3, LP3 takes place in the early days of E.D.N. III’s colonization, thus the planet is back to the icey wasteland from the original game, instead of the jungle environment from Lost Planet 2. You star as Jim Peyton, a Utility Rig pilot who’s working “off shore” as it where, trying to scrounge up the cash that can be found through the colonization of the planet, however the planet’s indigenous life is set on making the contract as hard to complete as possible. Akrid will be taking the enemy reigns this time around, as the NEVEC government hasn’t yet come into being in this game- and as such, there’s still a lot the poor colonists of E.D.N. III still don’t know about the Akrid. Different types, weaknesses, or even what sizes they come in are still largely up for debate at the time of the game’s story- which can make for some pretty intense fear. 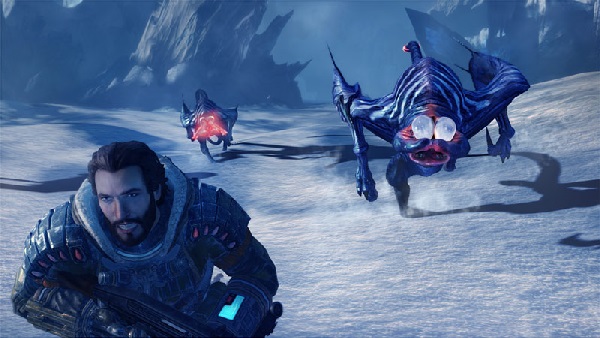 The game will be largely non-linear, opening the game back up into a Monster Hunter style open world, with missions separating down into linear dark corridor survival encounters, heavily reminiscent of Dead Space 3. The game overall has a darker, grittier look and tone than the previous two games, and an emphasis has been made on making the Akrid scarier- hell bent on your destruction rather than the bug hunt feel of the second game. The creatures have all been slightly redesigned to make them more menacing- feeling more Aliens than StarShip Troopers, overall having a more grotesque, meaty feel to them than the other two games.  The game even adds a Mercenaries Versus style gametype called “Akrid Survival”, where two teams of three survivors fight each other for survival, on top of incoming waves of Akrid monsters.

QTE encouters have been added in, ala Resident Evil 4-6, but the developers have tried to go out of their way to avoid it feeling like Resident Evil 6‘s over-blown button mashing. Instead, you’ll have to aim your weapon at weak points, while struggling against the creature’s grasp, in order to blast your way out. This is also very similar to some of the boss monsters from Dead Space, where you where forced to fire at the large yellow pustules at the monster’s  joints while it tried to pry you apart in  it’s claws. Overall, if you’re a fan of the Dead Space franchise, this game is taking a lot of notes- or if you’re too young to play the Mature rated DS games, this Teen rated game might be a decent stand-in while you wait. Even the camera has been modified to a constant over-the-shoulder view like RE or DS. 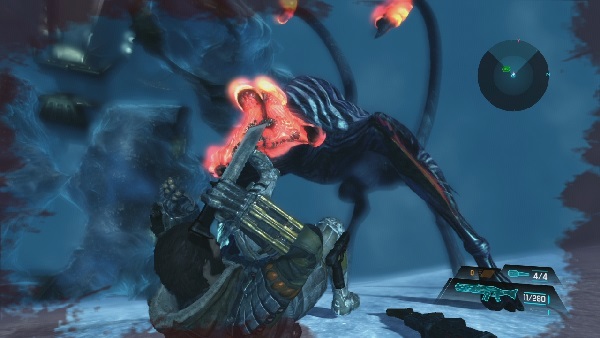 The game’s open-world approach will feature optional side-missions, complete with talking to other colonists and developing background story that might come into play in the previous games (well, next games. Argh! prequels are confusing!). Building thermal towers will come back, an element from the first game that was largely lost with the melted E.D.N. III in Lost Planet 2, forcing players to constantly keep an eye on their thermal energy- this time being utilized more like Dead Space‘s air-meter, rather than a simple timer for how long you have to complete the mission. Since the technology is unrefined, it will be harder to find and last for significantly less time, making searching for thermal energy more of a panicked search than it was in the original game.

So, overall- I’m pretty stoaked. Although, honestly, the game does look a little bit more than just inspired by Dead Space, but we’ll have to wait and see. It’s nice to a game as rich with new ideas as Dead Space get taken as inspiration for something, rather than another Capcom game trying to “Capture the Call of Duty market”. Now if only Capcom would figure out that it’s Resident Evil that needs this sort of inspiration… How do you feel? Excited to see how Lost Planet‘s leap to action-horror does? Or are you sorry to see Lost Planet 2‘s goofy action go away? Sound off bellow!